“Sometimes it’s difficult to remember this is an extension—it’s not a museum on its own terms,” declared David Chipperfield prior to the October 9 opening of his new building for the Kunsthaus Zürich, the city’s fine-art museum. Though Karl Moser’s original 1910 Jugendstil gallery has already been enlarged three times, Chipperfield’s $222-million, 201,285-square-foot edifice more than doubles the public space previously available, making the Kunsthaus Switzerland’s largest art museum. At such a scale, there was a danger the new might overwhelm the old, especially since the “extension” is an entirely separate structure on the other side of Heimplatz, the traffic-filled square where the museum is located. “We weren’t interested in an architecture of opposition,” explains Chipperfield with respect to this challenge. “I’m less interested in the idea that architecture should be innovative through its formal representation. We sought to respond to this place and especially the Moser Building.” 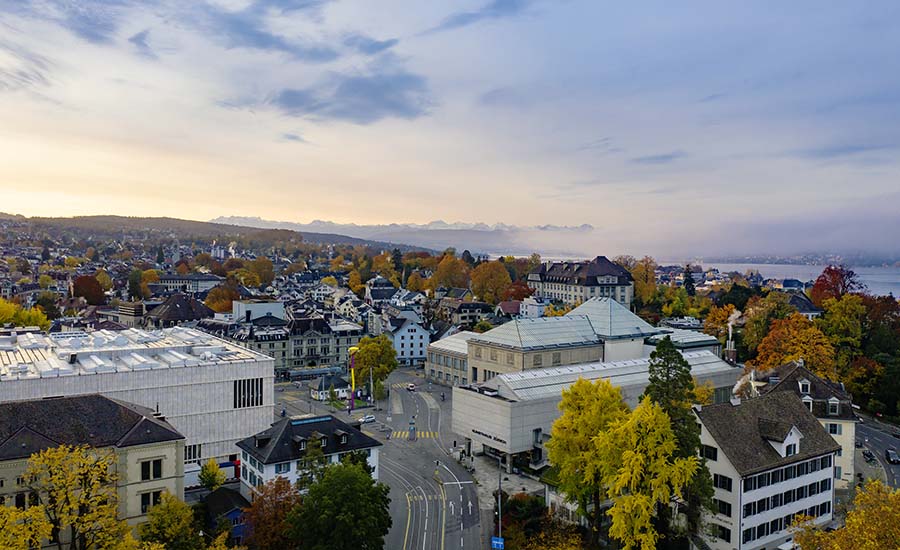 Aerial view of four buildings belonging to the museum. David Chipperfield’s addition is on the left; the original main building designed by Karl Moser (1910) is directly across the street. Next to it is the Pfister brothers’ expansion of 1958. Photo © Luxwerk, Zurich, click to enlarge.

Chipperfield is the first to admit that his extension is “rather classical in some ways.” The 197 by 197-foot box rises an imposing 69 feet, closing Heimplatz on its fourth side, where previously the square’s edge was under-defined. In deference to the Moser Building, as well as to the Pfister brothers’ 1958 striated-concrete extension next to it, Chipperfield’s edifice is dressed up like a noble warehouse, a rather blank box in stone, with full-height fins that march briskly around its elevations. Since they obscure the fenestration, hiding it completely in oblique views, the fins afforded the architects greater latitude with respect to window distribution, and also make it less obvious when curators block them to display light-sensitive art. 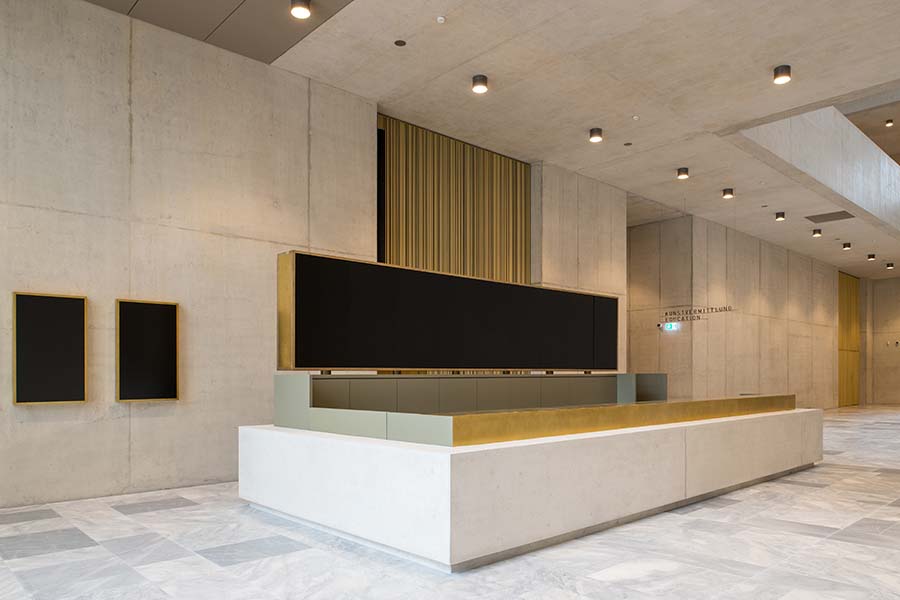 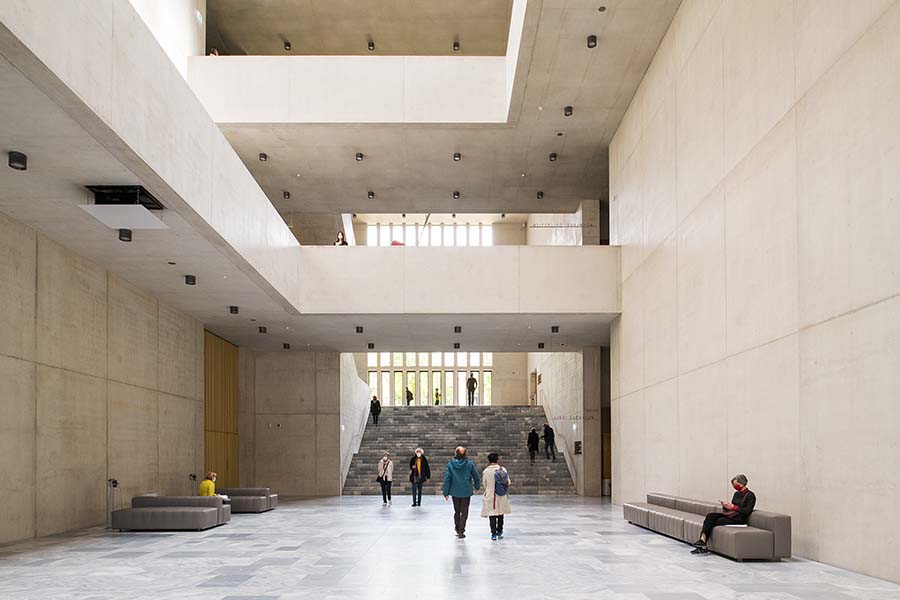 The entrance is just where you’d expect—towards the middle of the main facade on Heimplatz—clearly signaled by being set back from the sidewalk. You first enter a small, transitional space that accesses the bar/restaurant on one side (which will operate independently of museum hours) and the extension’s main hall on the other. 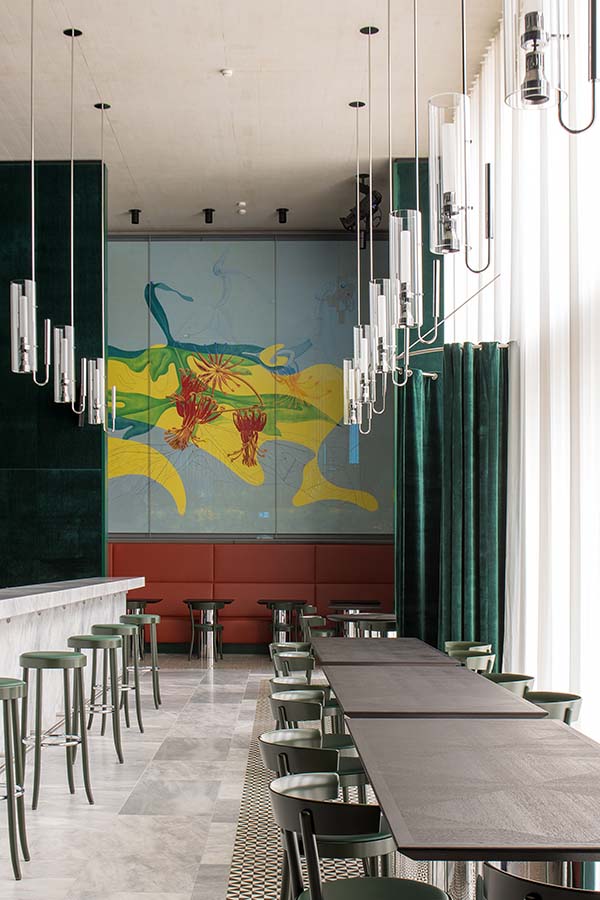 “Rather like a Venetian palazzo, an organizing hall is located in the middle, which orients you to all the rest,” says Chipperfield. Spanning the building’s entire width, from Heimplatz to the sculpture garden at the rear, and rising its full height with floor-to-ceiling glazing at either end, the hall can be accessed without a ticket. It is intended to operate at an urban scale: anyone can traverse the museum during opening hours. An impressive institutional space, it engulfs the visitor in a glut of naked concrete—this is Switzerland after all, they do it so well (but, already thinking about its environmental impact when the program was drawn up in 2008, the city insisted on recycled concrete). Chipperfield imagines it filled with site-specific commissions, events, happenings, even theater, but it remains to be seen how the curators will use it. 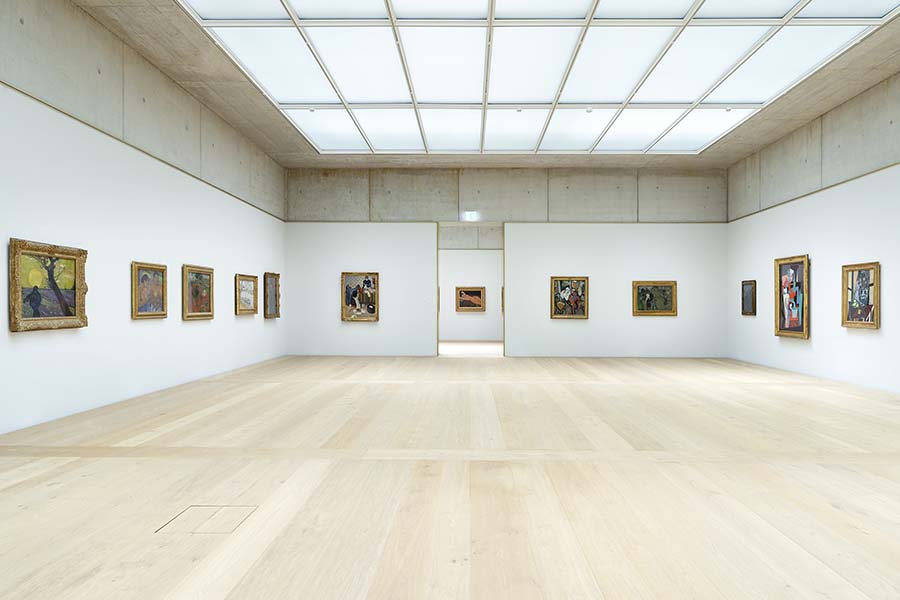 The hall provides access to the ballroom, educational facilities, and other such amenities on the ground floor (in the basement, a tunnel—another Swiss specialty—links up with the mother museum across the square). At the rear, a steep, temple-like flight of stairs incites you to move through the space and begin the promenade architecturale—the galleries, as in a classic museum or palazzo, are upstairs. “Fifty percent of the building is given over to Modernist collections that take the form of paintings on a wall,” continues Chipperfield. “They need rooms. What can you do? You make beautifully proportioned rooms; you concentrate on the quality of the light; you concentrate on the floor. It’s a house of rooms of different increments with a few big galleries.” (Among the works the extension was designed to display is the controversial E.G. Bührle Collection, assembled by a Swiss arms dealer who made his fortune selling to the Nazis and also bought art looted from Jews.) Just like a classical museum, the extension is largely daylit, with windows on the second level and skylights on the third. And like a classic palazzo, there’s clever use of poché to tidy away emergency stairs, staff spaces, bathrooms, etc. 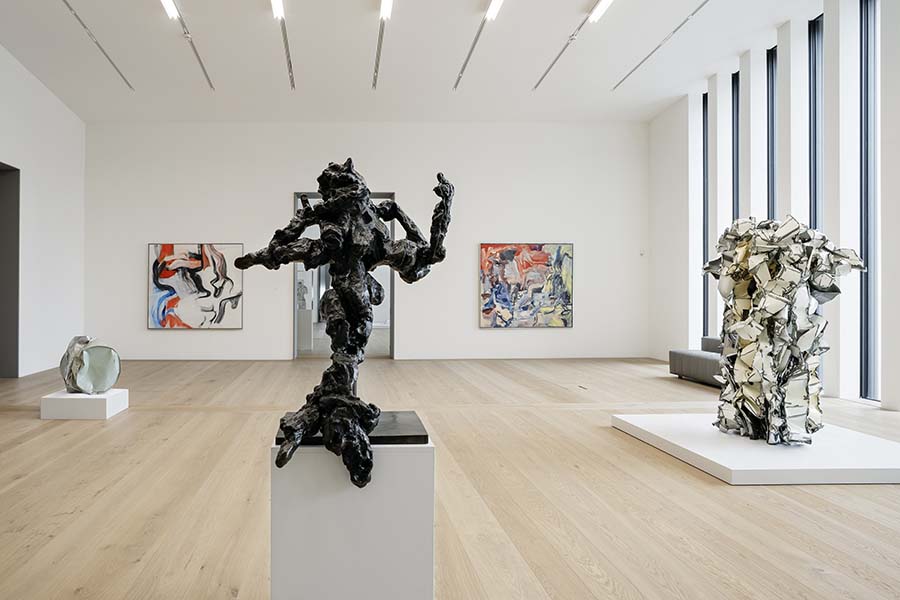 Early photographs of the extension when spaces were empty made it seem cold, clinical, and ponderous. The reality, especially now art and people have been admitted, is quite the opposite: the concrete appears warm and welcoming; though marble has been used to pave the circulation spaces (the same as in the Moser Building), the gallery floors are in mellow oak; velvety grey walls set off the Bührle Collection; and everywhere handrails, signage, cladding, and doors are brass, sanded and waxed so that it will patinate—with visible hand and finger marks—to a bronzy golden brown. Throughout, craftsmanship and detailing are exquisite: site-design supervisor Jan Parth recalls how all the craftspeople expressed their pride in contributing to the Kunsthaus, and you can feel it in every square inch. 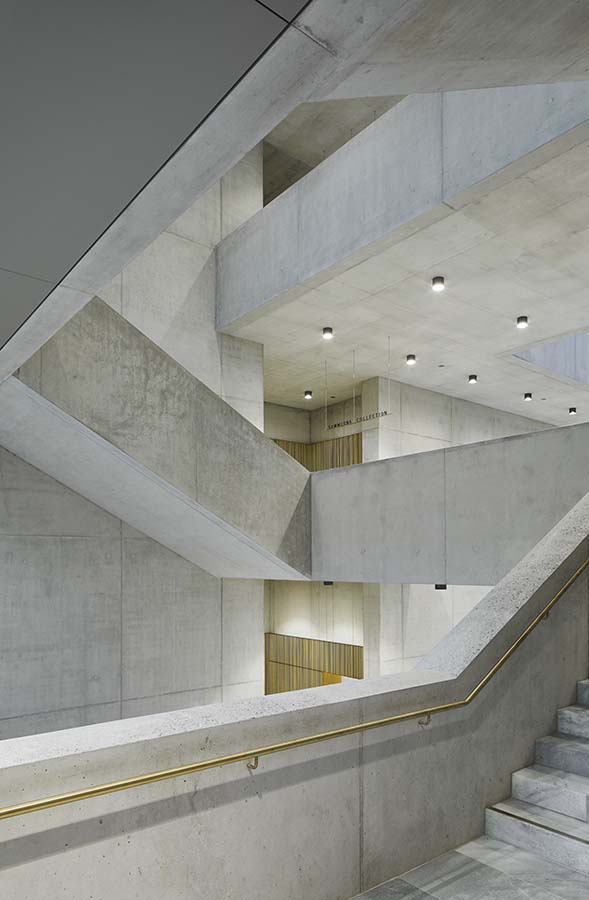 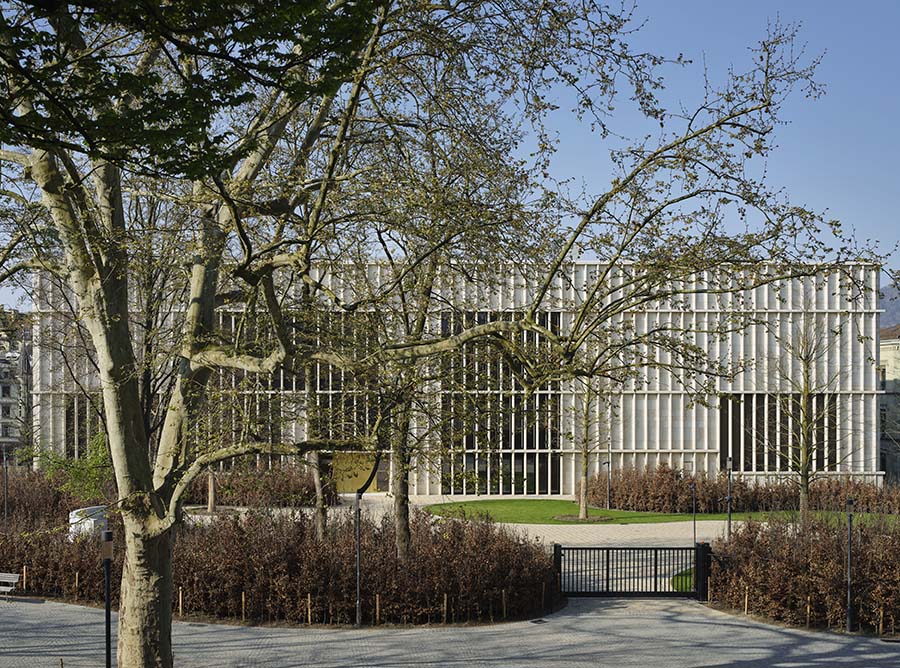 Chipperfield believes that museums should appeal first and foremost to local communities. Does he not think some sectors of the population might find his palazzo rather intimidating? “Perhaps. Were it a museum of contemporary art, a Kunsthalle of some sort, that critique would be more relevant,” he suggests. “It’s a reasonably conservative, classic building in a reasonably conservative, classic city.” To those who bemoan a lack of edginess or innovation, he replies: “Our practice is working more and more on environmental and societal issues, and I do think our notion of progress is coming in for a bit of a shock. Things we presumed were progressive aren’t necessarily. And things that looked a bit old-fashioned suddenly look quite modern.” Whether or not it heralds the future, this impeccable palace of art plays its role to perfection, which is why Chipperfield’s Berlin office won the competition in the first place — the right team for the right job. 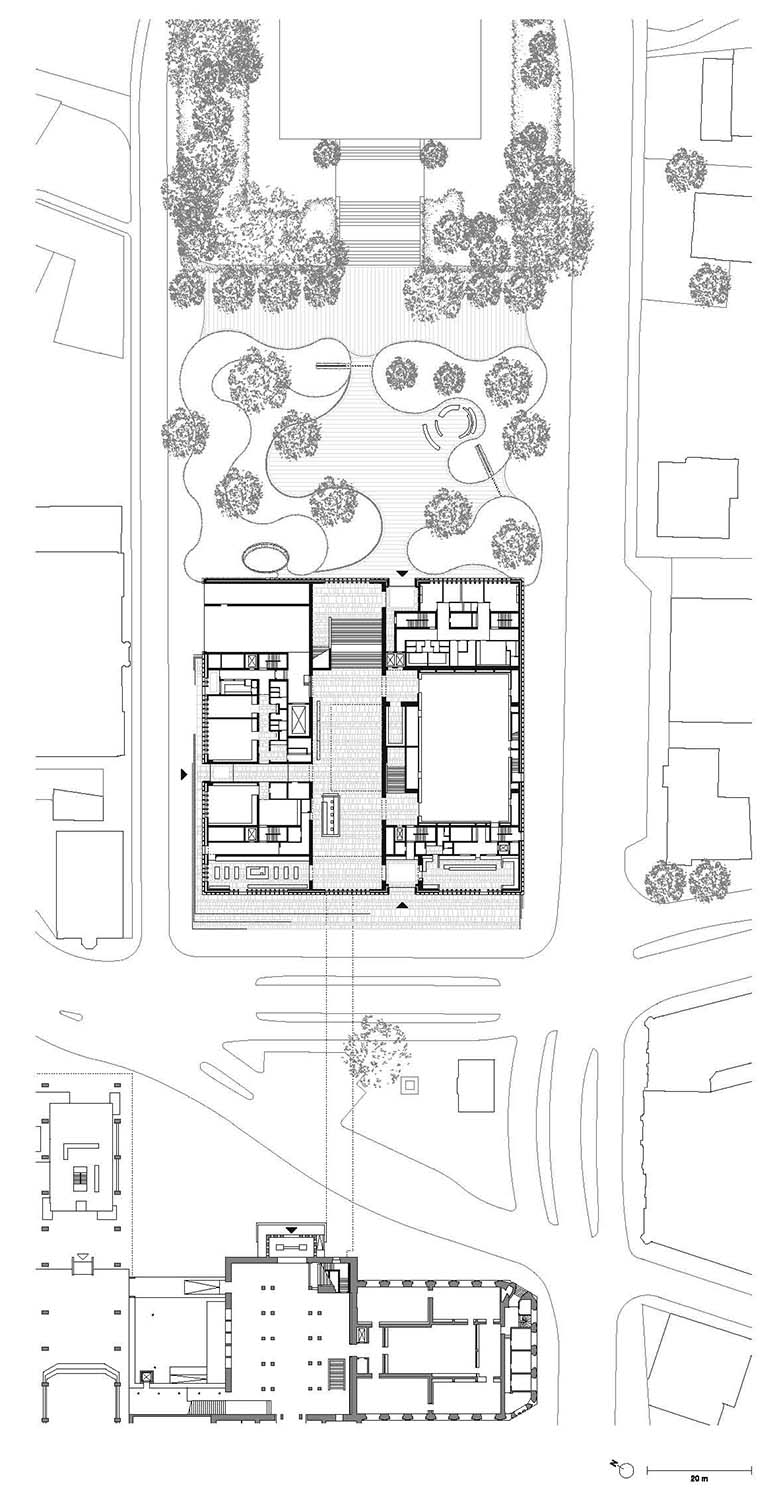 Back to Cultural Buildings 2021
KEYWORDS: Zurich