A few miles away from the French-Italian border, on a steep slope facing the bay of Monte-Carlo, an important episode in the restitution of Modernist heritage has taken place in Roquebrune-Cap-Martin. Record has already announced the completion of the restoration of E 1027, but the circumstances which have led to the house’s reopening to the public deserve a fuller narration, as it is an exceptional process that has taken place for more than 20 years on an inspired site.

At the end of the previous century, the house built between 1926 and 1929 by the Irish designer Eileen Gray for, and with, her younger friend, the architect Jean Badovici, was in ruins. A thick jungle suffocated the former gardens, while the interior had been squatted and vandalized. The most significant pieces of structural furniture had disappeared. To evolve from this nearly desperate condition to the spectacular building now visible from the beach, a chain of unique episodes has been wrought.

The legacy itself was remarkable. Gray and Badovici had built with rudimentary means a sophisticated summer residence modeled after a ship, deploying in the building the “Five points of a new architecture” articulated by Le Corbusier in 1927. To echo the identification number of the local fishing boats, they named it E 1027, and applied to the interior the combined refinement of Parisian artisans and of naval cabinet makers. 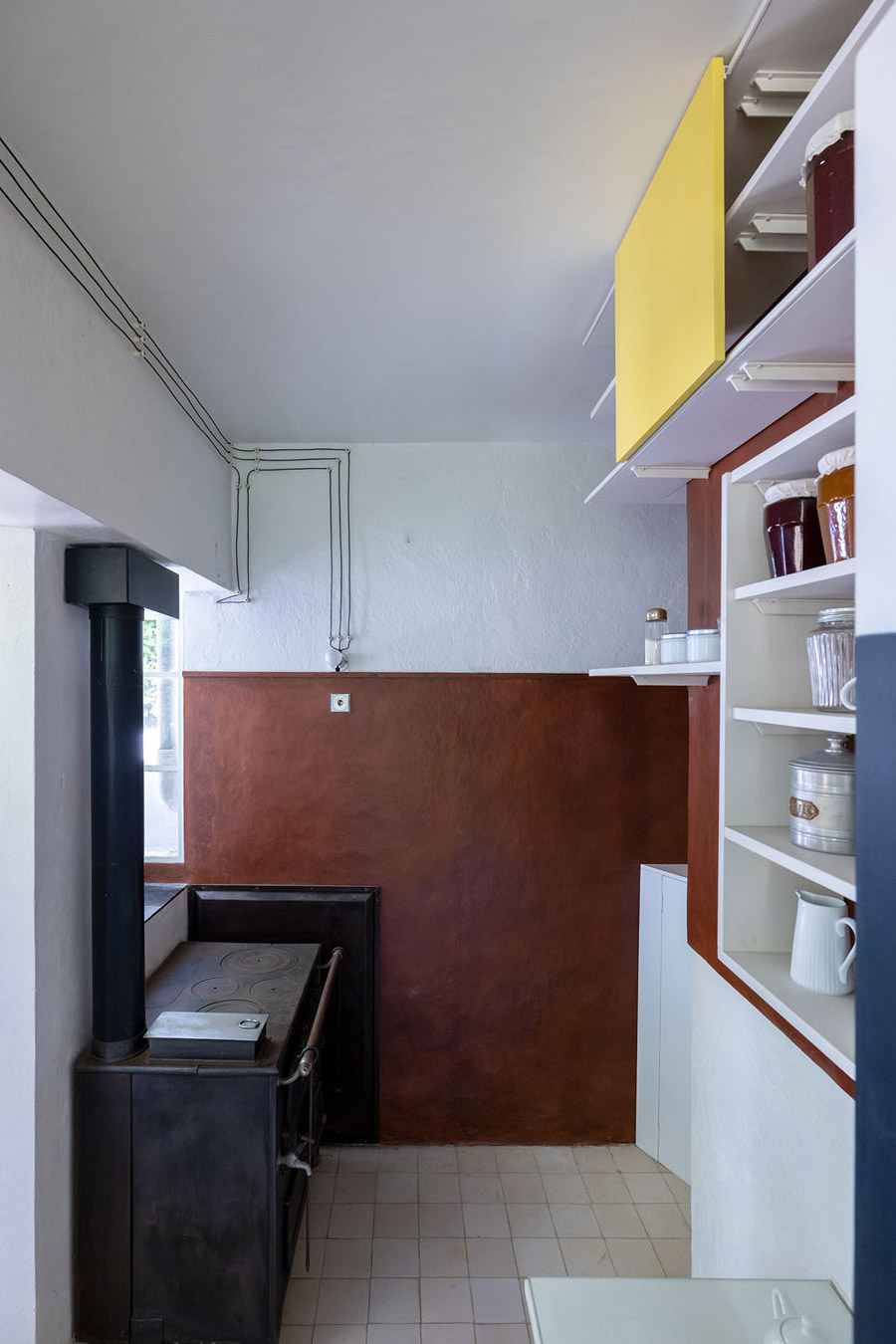 Gray would end up building another house for herself in nearby Castellar, and Badovici took full control of E 1027. Befriended by Le Corbusier, whom he had commissioned to do a mural painting for his house in Vezelay, Badovici was happy to have Le Corbusier paint, in 1938 and 1939, no less than seven of them on both floors of the house in Roquebrune-Cap-Martin, which have been considered in retrospect by several historians as a deliberate sexist offense to a female designer. Recent scholars such as Tim Benton have shed a nuanced light on their making and the reactions of Gray, who was not pleased, but retained her admiration for Le Corbusier.

Le Corbusier would spend several summers in Roquebrune after the war and ended up quarreling with Badovici. The owner of an adjacent snack bar gave Le Corbusier a small plot of land, on which he built in 1952 his minimalist Cabanon, overlooking the beach where he would die in 1965. In the meantime, Badovici had passed away, and the house went through significant changes with two successive owners. Listed in 1975 as a historic monument, but already in a dilapidated state, it was deprived of much of the original furniture, which was auctioned in 1991 in Monaco. 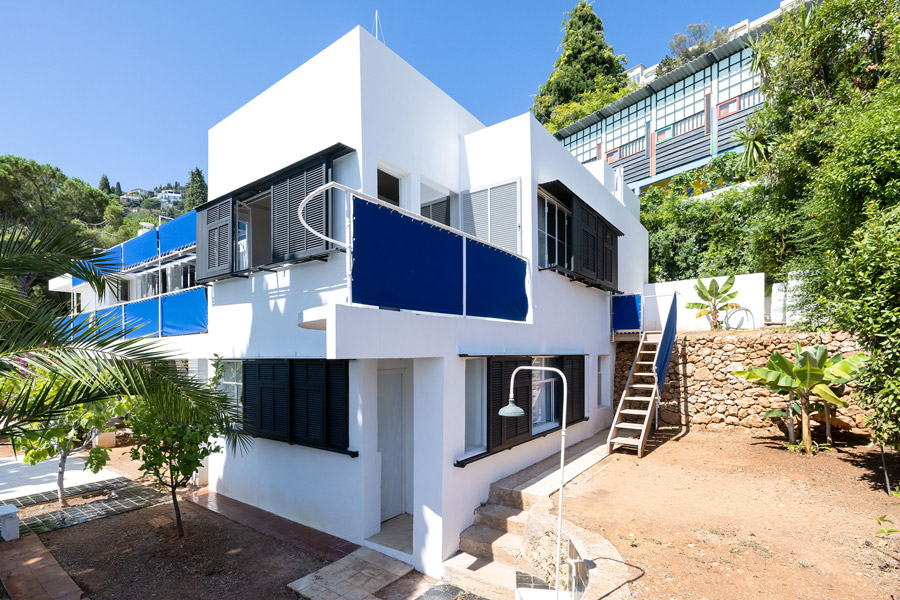 The house was purchased by the Coastal Conservancy, a state authority in charge of acquiring seashores all around France, but work didn’t start until 2006, when a first, rudimentary restoration was undertaken. Faced with the unwillingness of the public institutions to carry out the refined interventions required, a private association called Cap Moderne took over. Under the guidance of the British businessman and collector Michael Likierman, it ended up raising almost half of the cost for the comprehensive program, completed in the spring of 2021. Cap Moderne put the architect Claudia Devaux in charge of the project. After the exemplary restoration of the main bathroom, complete with all its delicate features by her and the Zurich-based architect Arthur Rüegg, each room regained the condition it had in 1929, when the canonic photos were published in Badovici’s journal L’Architecture Vivante had been shot.

Thanks to the creation of a scientific advisory committee, which included many historians and experts of Modernism, the project escaped the rigid control of French public administration. Regular meetings allowed for an exchange of ideas on each component of the house and the gardens. The discussions that developed in this context convinced the notoriously scrupulous Le Corbusier Foundation to accept the dismantling of one of his murals situated under the pilotis of the house, and rather easily, as it was a reproduction from the early 1930s. More significantly, the most offensive, a painting situated in the living room, was hidden behind a panel, thus allowing for a literal reconstruction of its 1929 condition.

Among the other major decisions, the recreation of the original awning using blue canvas came about from interviews with the last surviving neighbors of the house as it was in the 1930s. The meticulous work of restoring each piece of furniture, each lighting fixture, each ingenious piece of equipment, such as the mosquito nets, was achieved by the architect Renaud Barrès, who had a comprehensive knowledge of the building and had dug through the archive of Badovici, and Burckhardt Ruckschio, who had previously restored buildings by Otto Wagner and Adolf Loos.

Thanks to the private character of Cap Moderne, it became possible to overcome the rigid legislation on public projects and hire contractors without resorting to tenders, which would have privileged the less costly firms and not the most qualified. Artisans, who had the ability to recreate the most elaborate objects in metal and leather, were found in Vienna. As for the textiles and the carpets, which were a determining component of E 1027, they were woven anew by Viennese historian and artisan Ute Huber-Leierer. The grounds surrounding the house were cleared of the invasive plantings made since the late 1920s, and landscape designer Philippe Deliau restored the horticultural atmosphere of the original. An unprecedented group effort has thus become a total work of restoration art.

Editor’s note: Jean-Louis Cohen is the Sheldon H. Solow Professor in Architectural History at New York University’s Institute of Fine Arts. From 2015 to 2021, he chaired the Scientific Committee overseeing the restoration of E 1027. He’s the editor of the forthcoming book, E 1027: Restoring a House by the Sea.

Jean-Louis Cohen is professor in the history of architecture at the Institute of Fine Arts, NYU, and author of the recent Building a new New World: Amerikanizm in Russian Architecture.

A Look Back at the Work of Several Celebrated Photographers