In advance of the United Nations climate conference in Glasgow, Scotland, COP26, the Royal Institute of British Architects (RIBA), in partnership with the climate initiative, Architects Declare, hosted a Built Environment Summit. Held on October 28 and 29 at RIBA’s London headquarters and virtually, the meeting brought together hundreds of experts, advocates, and professionals from across the global design and construction sector (RECORD attended online). The summit was conceived as a live extension of the two organizations’ Built for the Environment report, a comprehensive call-to-action on the climate and biodiversity emergencies. In opening the event with RIBA president Simon Allford and Architects Declare steering group member Andrew Waugh, Maria Smith, the report’s editor and director of sustainability and physics at Buro Happold, summed up the summit’s central theme: “Ambitious change in the built environment sector is possible,” they said, “and together we can bring about the change that’s needed.”

Published by the RIBA and Architects Declare, with over 200 endorsements from prominent industry organizations worldwide, Built for the Environment posits a set of principles and recommendations for making the shift to an equitable, sustainable built environment. It distills lessons from over a hundred case studies from around the world to demonstrate that the requisite tools and technology exist, and to give governments the confidence to commit to the regulations, infrastructure, and support that are needed to facilitate the transition. The report will be presented at COP26, now underway in Glasgow through November 12. Many believe this COP to be the world’s last real chance to bring runaway climate change under control.

In a summit panel discussion, Architecture 2030 founder and CEO Edward Mazria highlighted the significance of limiting global heating to a 1.5°C increase over pre-industrial levels, which is the target set in the 2015 Paris Agreement. A mere half a degree of additional heating beyond that would endanger a further one to two billion people. For its part, the built environment sector needs to bring emissions to zero by 2040. As a basis for hope that the sector can, in fact, achieve what at this point looks like a long shot, Mazria noted that for the first time in U.S. history, the country’s building sector emissions are decoupled from gross floor area. Even though buildings’ total square footage continues to rise, he explained, total emissions have fallen and are now about 30 percent below 2005 levels. Key to further gains, Mazria said, will be cutting the use of, and carbon associated with, concrete and steel, which together account for almost half of all industrial emissions.

A keynote address from Julian Allwood, professor of engineering and the environment at Cambridge University, made a sortie in what he calls the second “phony war” of the climate crisis—against techno-optimism, the belief that new technologies will eliminate emissions without the need for significant societal change. (The first phony war, against climate change skepticism, was won sometime between the fourth Intergovernmental Panel on Climate Change Report in 2007 and the Paris Agreement of 2015, he said.) As an instance of techno-optimism, Allwood called out the UK’s net zero plan, which depends in large part on innovations—such as hydrogen fuel and carbon capture and storage—that have no real hope of being fully developed and implemented at scale in time to make a difference. “A real plan would be to shut all of the things that cause emissions,” he said. With non-emitting electricity able to provide an estimated 60 percent of the UK’s current supply, “we could live well within that, but efficiencies are required.” 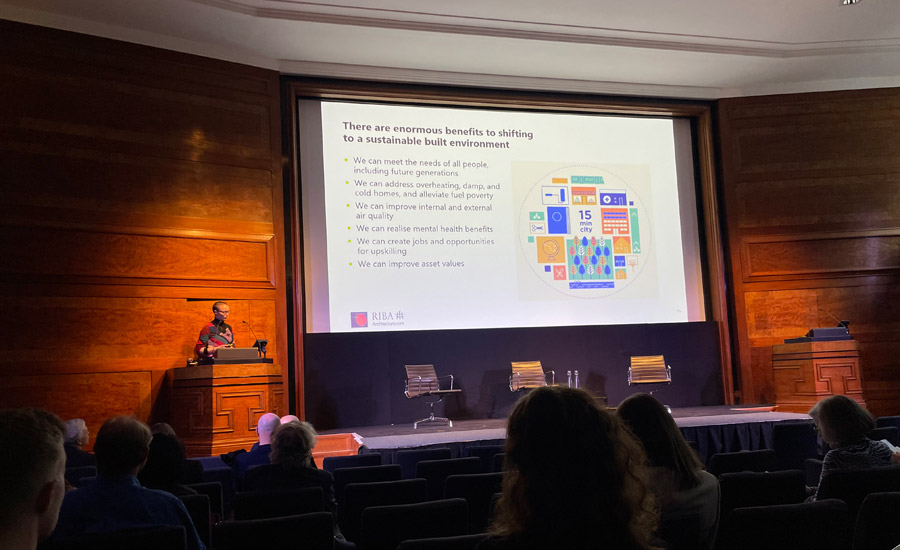 Maria Smith, director of sustainability and physics at Buro Happold, presents the Built for the Environment report at the London summit. Photo © Paul Wild/Gort Scott

In construction, those efficiencies entail using fewer materials, and Allwood identified the spacing of the structural grid as the critical factor due to the depths required of the spanning members: “No matter what the system of construction, bigger spans lead to bigger emissions,” he said. Software now under development by the engineering firm Price & Myers aims to help project teams evaluate the emissions associated with various spacing options during schematic design. Additional material efficiencies could come from optimizing the cement mix in concrete, discontinuing the too-common practice of over-sizing steel sections, simplifying building forms, and innovating with structural schemes: arched systems in concrete, for example. Such efficiencies could eliminate about 75 percent of building sector emissions, buying us about 10 years, Allwood estimates, but won’t bring construction emissions to zero. With no prospect of zero-emissions cement, he said, we should assume there will be no cement in use in 28 years. There will be steel, with all growth through recycling. As for innovations in wood, because trees grow slowly, the amount of new timber is constrained, and the more it’s processed, the higher its emissions. Overall, “we should assume less material,” Allwood said. “We simply can’t afford demolition after 2050.” Instead, existing buildings will need to be optimized for more intensive use, and strictly necessary new buildings must be designed for disassembly and re-use. All of which, Allwood said in conclusion, opens up tremendous scope for creativity and innovation.

Further panel discussions and keynote talks illuminated policies and practices, issues and achievements—from circular economies to healthier buildings—on the road to an equitable and sustainable built environment. The philanthropic Laudes Foundation launched Built By Nature, an industry transformation network and accelerator fund with a vision for the built environment to work in unison with the natural world.

In closing the summit, environmental lawyer and climate change and development policy expert Farhana Yamin cited a sobering indicator. She noted that, based on countries’ current commitments, emissions by 2030 will be 16 percent higher than 2010 levels; to keep within a 1.5°C heating increase, they need to be 45 percent lower. “We have allowed other values and other interests to trump everything else,” she said, “and are committing to a fairly horrific set of ecological melt-downs, some of which are already in train.” Identifying high embodied–carbon new builds and inadequate retrofits as examples of the AEC sector failing the planet, she encouraged design professionals to incorporate a sense of activism into their practice, to consider themselves accountable not only to their clients’ priorities but more importantly to the public good. “The task before you now is to bring that 2050 target forward so that it’s actually in line with 1.5,” she said. “It’s time you delivered your very best.”