Since its founding in 1974 by a group of high school students aspiring to be actors, Chicago’s Steppenwolf Theater has evolved from a scrappy incubator of local talent to an internationally acclaimed cultural powerhouse. Along the way, several of its productions have moved to Broadway, where they have won 12 Tony Awards, and the company has been awarded the National Medal of Arts. Its quarters have grown from a church basement in suburban Highland Park to a campus of three adjacent buildings dominating a block of prime commercial real estate in the upscale Lincoln Park neighborhood on the Near North Side. The newest of these is the recently completed $54-million Liz and Eric Lefkofsky Arts and Education Center, designed by Adrian Smith + Gordon Gill Architecture. 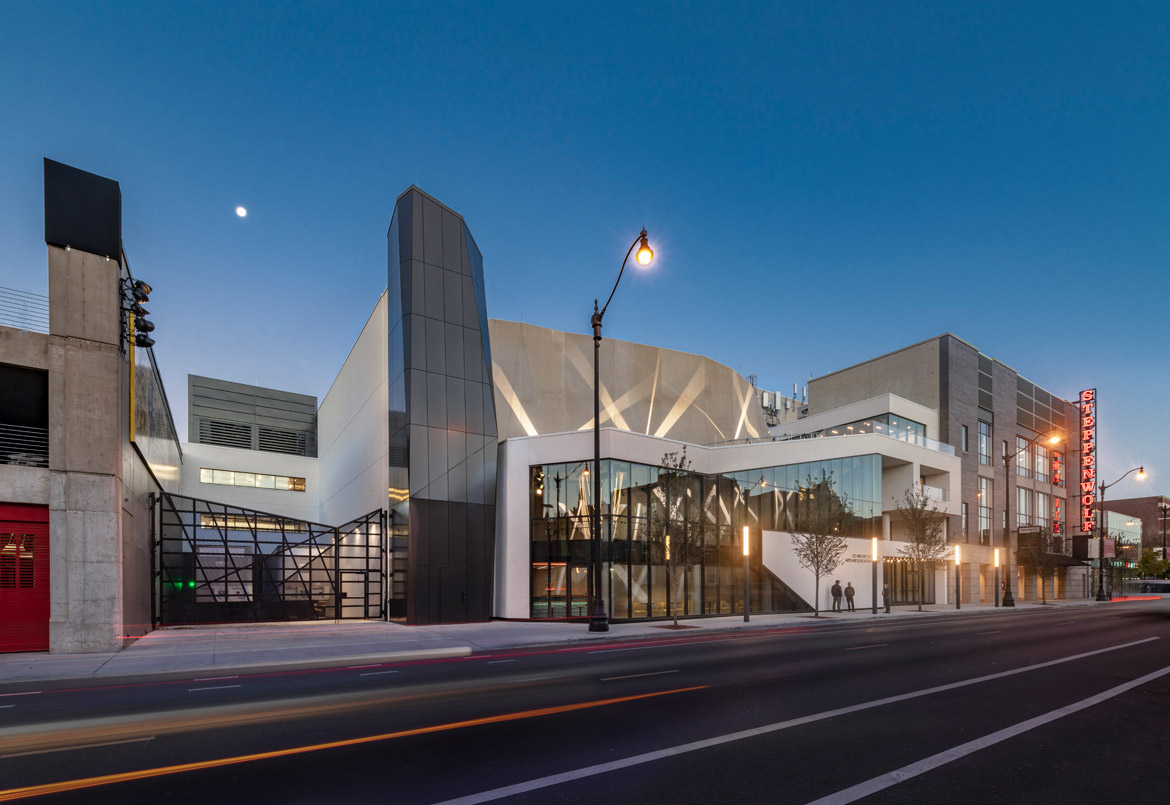 Smith and Gill, prolific designers of skyscrapers in locations as far flung as Dubai, Seoul and Shenzhen, might seem an unlikely choice for this more modestly scaled local project. But Gordon Gill has been a Lincoln Park resident and devoted Steppenwolf fan for decades. “It’s my neighborhood theater,” he says.

Steppenwolf hired Gill to draw up a master plan in 2010. Its 38,000-square-foot home, built in 1991 to a design by John Morris Architects, was proving inadequate for the company’s growing stature and ambition. Back of house functions like wardrobe were cramped; a second theater had taken over essential rehearsal space; and there were no dedicated rooms for education, a key component of the troupe’s mission. In addition, the building had a sober opaque quality that didn’t suit Steppenwolf’s edgy character or its desire to connect with the city.

The master plan proposed expansion on both sides of the existing building, linked on multiple levels by interior streets. To the north, a former furniture store of 18,500-square-feet was clad in a sleek glass curtain wall and repurposed to provide administrative offices, an 80-seat black-box theatre and a bar. To the south, a parking lot became the site of the new 53,000-square-foot facility, which contains a theater-in-the-round, a voluminous lobby, a bar with outdoor seating, ample backstage space, a conference room, and classrooms that double as studios. 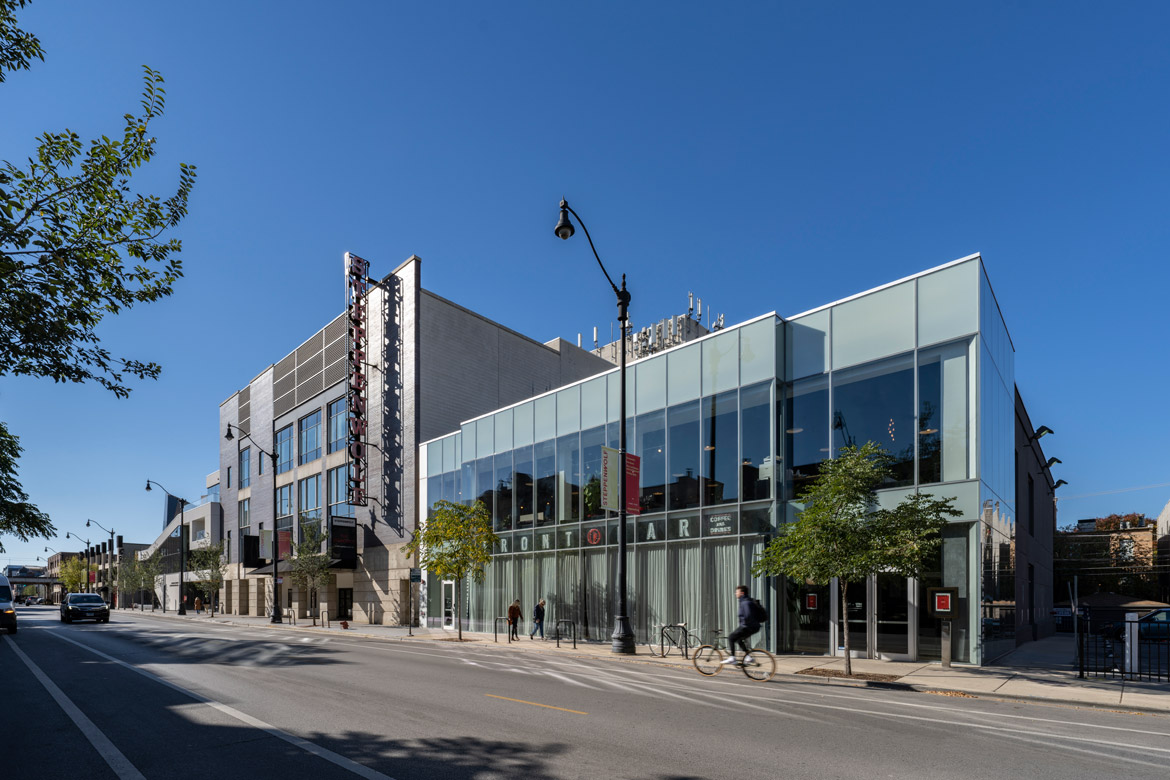 A former furniture store was clad with a new curtain wall and now houses administrative offices, a black-box theater, and a bar. Photo © James Steinkamp Photography

The street elevation is a lively and mostly transparent composition, with dark tinted glass framed by a structure of white EIFS-clad concrete. The south end is punctuated by a stair tower, clad in aluminum panels with a brushed carbon finish. At the north end, a cantilevered conference room provides a terminus for a diagonal parapet that traces the angle of the lobby’s ceiling. Sensitive contextual moves include a glass module based on window and curtain wall proportions in both buildings to the north and the approximate alignment of an attenuated fascia, which doubles as an entry canopy, with the adjacent building’s rusticated concrete base. “Urbanistically,” says Gill, “the intent was to maintain the varied street scale and pattern of smaller buildings rather than create a single monolithic expression.”

Clearly visible behind and above the façade is a 15,340-square-foot, 400-seat theater-in-the-round. “The building's identity and purpose are on display here,” says Gill. The 54-foot-high volume is framed in steel and clad in large panels of fiberglass-reinforced precast concrete, rendered surprisingly elegant by a ribbed pattern and a warm champagne color. It rises from a polished, exposed aggregate floor of a similar hue and up through a skylight, creating dramatic visual juxtapositions in the surrounding circulation areas. Inside, the space is partially enclosed by perforated metal panels finished to look like weathering steel, and the exposed armatures for catwalks and lighting are nicely integrated. 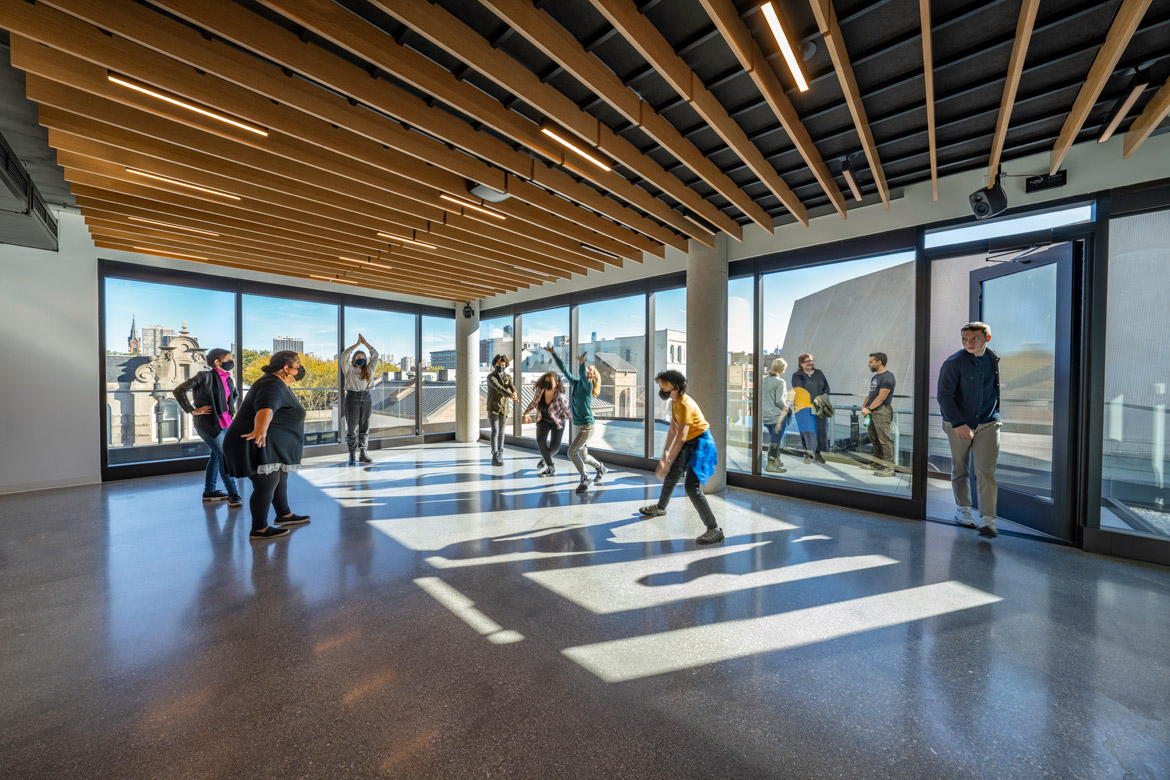 “Theater is the collision between artist and audience,” says Steppenwolf’s executive director Brooke Flanagan. “Our new and renovated buildings deliver the ideal spaces for these encounters and pave the way for our company’s future growth.” “This concept of collision,” adds Gill, “was a driving force that led to the dynamic nature of the design.”

Because the grand opening won’t occur until April 2022, with an adaptation of Chekhov’s The Seagull, it’s too soon to say how well the new theater works. But it’s clear Gill has understood and given form to his client’s goals, and there’s no shortage of architectural drama in his ambitious, animated and nicely resolved production.