Waller Creek is an urban waterway in Austin, Texas—stretching from Waterloo Park, just beside the Capitol, to Lady Bird Lake—that had for years experienced severe flooding and erosion. A decade ago, construction began on a mile-long flood-diversion tunnel to channel overflow. At the same time, in 2011, an international competition was launched to redesign the surrounding parkland. Michael Van Valkenburgh Associates (MVVA) won with a scheme that would not only restore the damaged ecosystem but reinvent this long-forsaken but central corridor. Now an 11-acre portion of Waterloo Greenway, the first piece of the complex undertaking, has been completed, with a stunning new open-air theater designed by Thomas Phifer and Partners as its centerpiece. 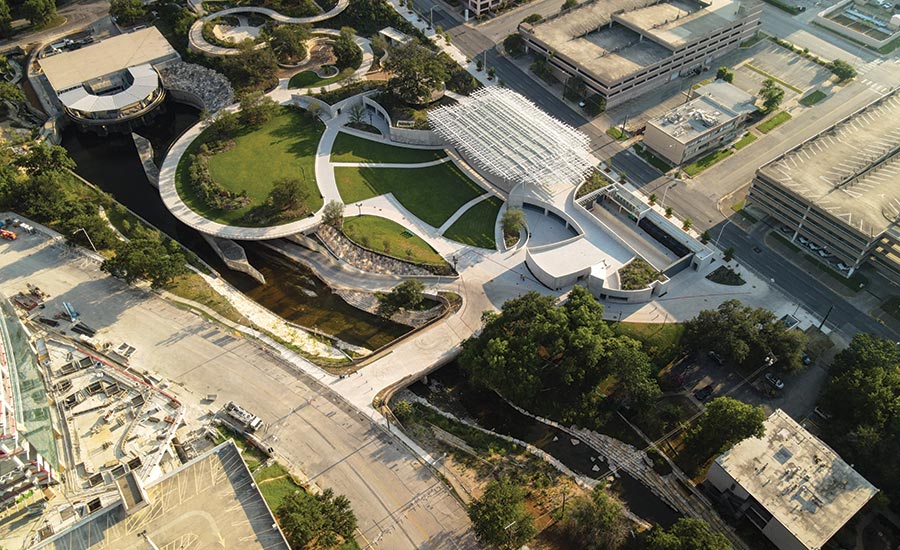 A bean-shaped area of the park, called the “Flying Lawn,” cantilevers off an unsightly concrete structure in the creek, part of the tunnel project to divert water. Photo © Waterloo Greenway Conservancy, click to enlarge.

The idea for a medium-scale outdoor performance venue—this one holds an audience of just over 5,000—has become very popular, and profitable, for cities, and was particularly well suited for a music-loving place like Austin. With year-round concerts and cultural events planned, Moody Amphitheater was conceived as an ongoing source of revenue for the fledgling Waterloo Greenway Conservancy. While the design submitted as part of the competition featured a soaring, cloudlike, tensile covering over the stage, the theater’s ultimate siting within the view corridor of the Texas State Capitol put limits on its height. Still, Phifer wanted it to be “as ethereal as possible.” 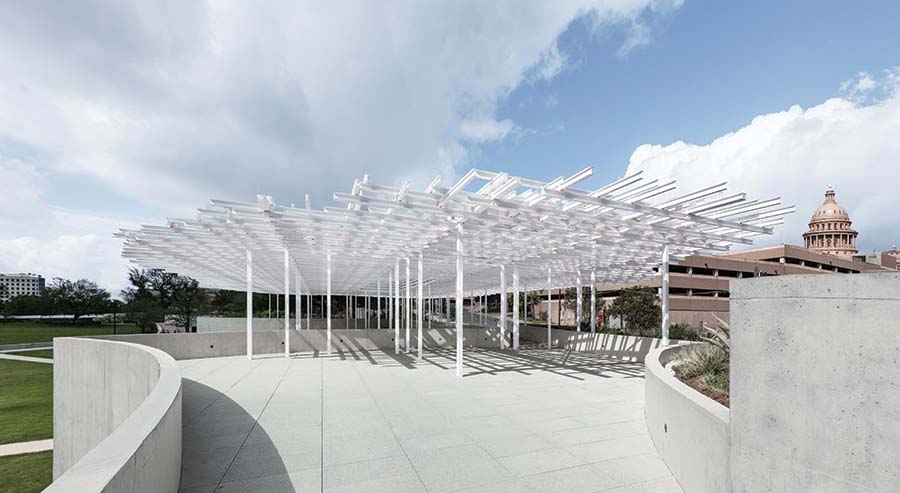 The theater is located within the view corridor of the Capitol. Photo © Scott Frances

The 30-foot-high steel-and-glass canopy embodies the “spirit of lightness and transparency” Phifer envisioned. But, rather than a cloud, the lacy roof, dense in the middle and feathered at its edges to cover 20,000 square feet, morphed into a weave of sorts, crisscrossing 15 layers of stacked truss elements and I-beams and more than 2,000 nonstructural members, almost all of them aluminum, within a 20-foot-square grid of bays. “It’s both orderly and fanciful,” says Guy Nordenson, the structural engineer on the project. “It tunes itself to the particularities of the requirements.” 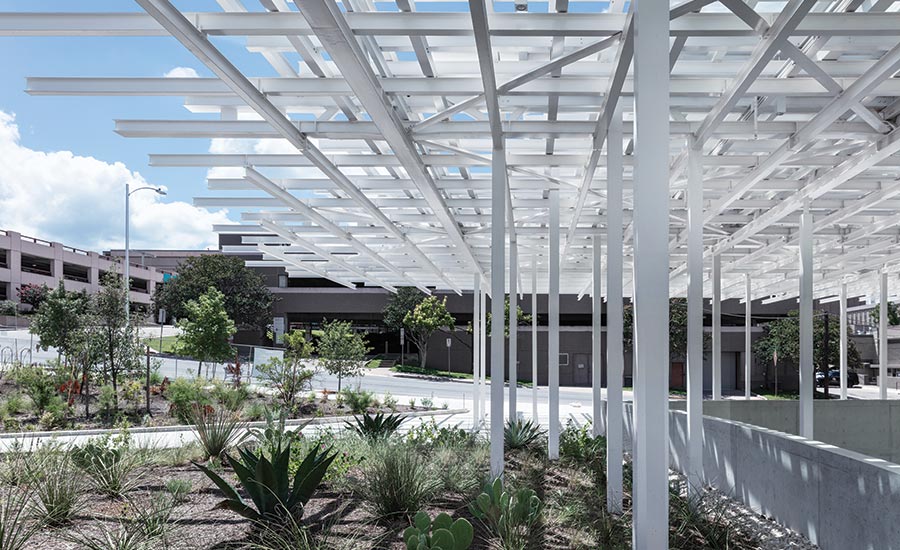 That includes a 60-foot by 40-foot column-free zone on the stage for performers, with hefty but constantly changing audio and light equipment, as well as sets and curtains, suspended from the canopy for different types of shows. Elsewhere, the irregularly spaced columns, fabricated from custom sections of steel plate to be either hollow or solid, depending on loads, rest on the cast-in-place concrete stage and one-story support facility beneath it.

MVVA expanded the lawn in the park, planted with Bermuda grass, by almost half an acre to accommodate the venue and the accompanying concessions and restrooms, but a number of considerations were taken into account to make it all seamless. “The challenge is integrating all this without seeing all of it,” says MVVA partner Gullivar Shepard. “How do you do all this in a park without ruining the idea of a park?” 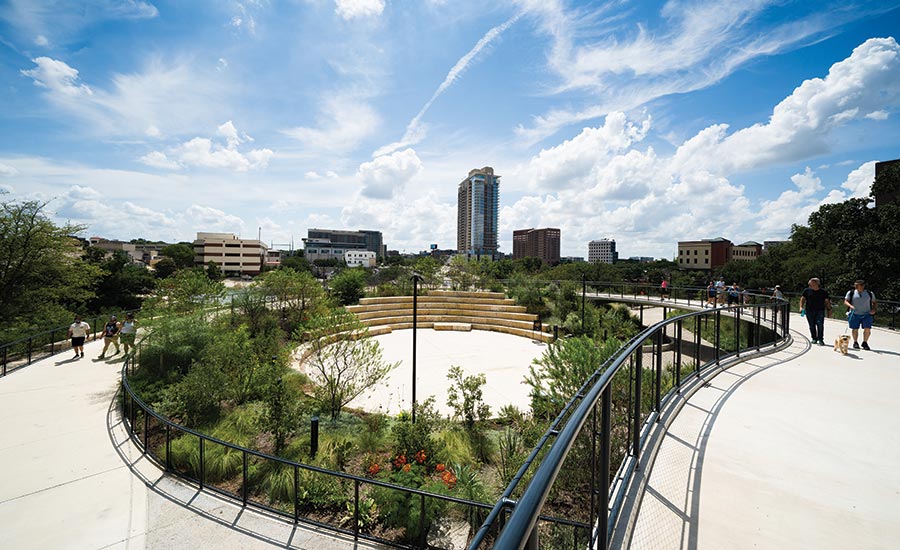 Both the architect and landscape architect wanted the theater to be accessible to the public even when there are no concerts, but easily closed off for performances. And nobody wanted a fence. This resulted in three points of entry that control the flow of crowds for shows, which kicked off here in August. Off hours, yoga classes and other types of gatherings have taken place beneath the trellislike canopy, which otherwise provides much-needed shade to parkgoers during Austin’s long, hot summers. The landscape architects also put in 500 trees that offer shade, including eight large live oaks. The planting concept of the park was to create a rich understory tapestry beneath the more consistent live oak canopy. Other species native to Texas, including groundcovers like cedar sage and twist-leaf yucca, and shrubs like agarita and evergreen sumac, are now thriving. A 50,000-gallon storage tank captures water at the base of the amphitheater from sources around the park for irrigation.

This “integrated nature-machine system” as MVVA calls it, reflects an evolving narrative in which the development of cities and the promotion of their natural systems are necessarily intertwined. In this part of Austin, there are no longer 15-foot surges of water. In place of a neglected park, a restored creek has become an oasis. Pedestrians and cyclists enjoy rolling paths, including a skywalk. Gardens, playgrounds, and food trucks animate what is already becoming a thriving cultural hub—all anchored by an architectural gem. 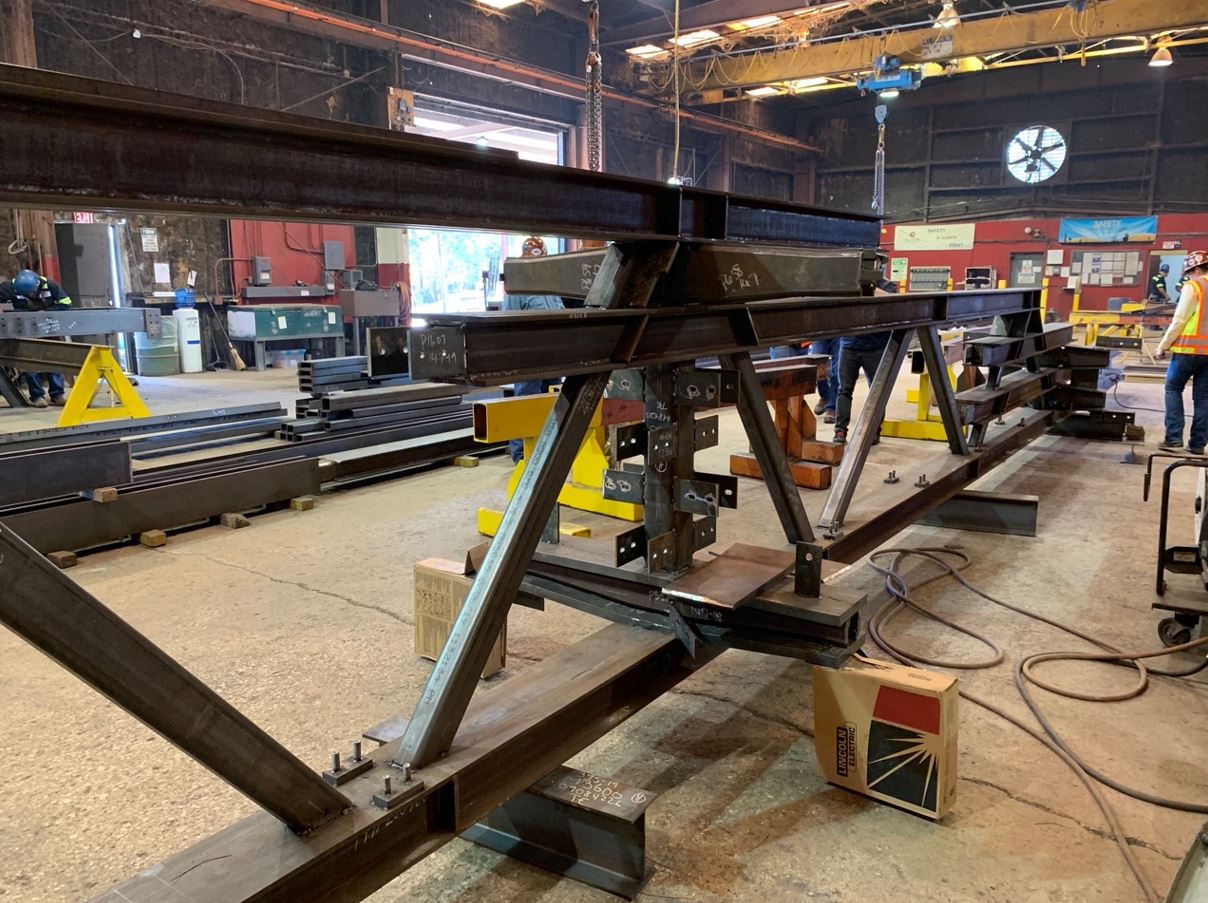 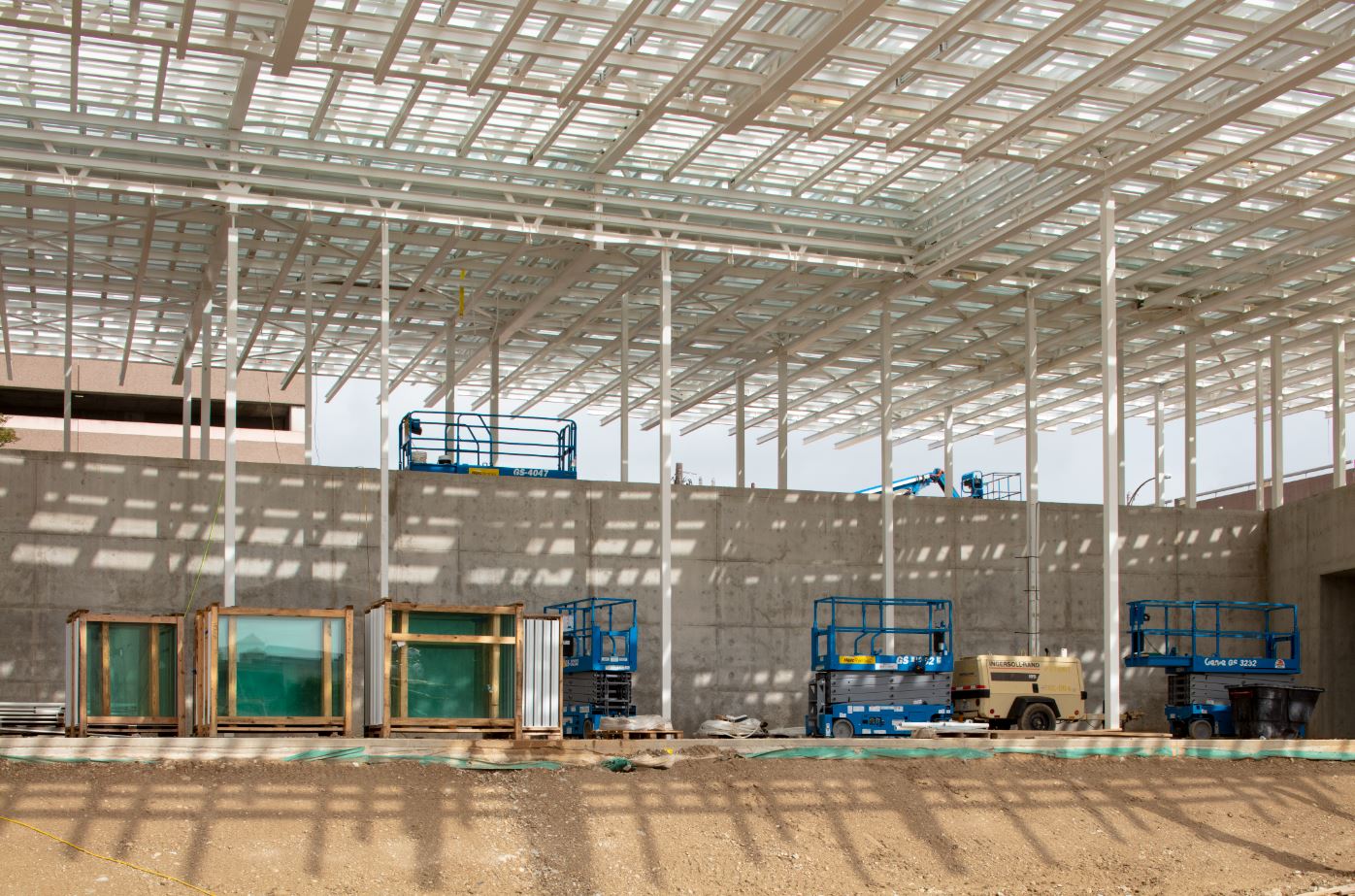 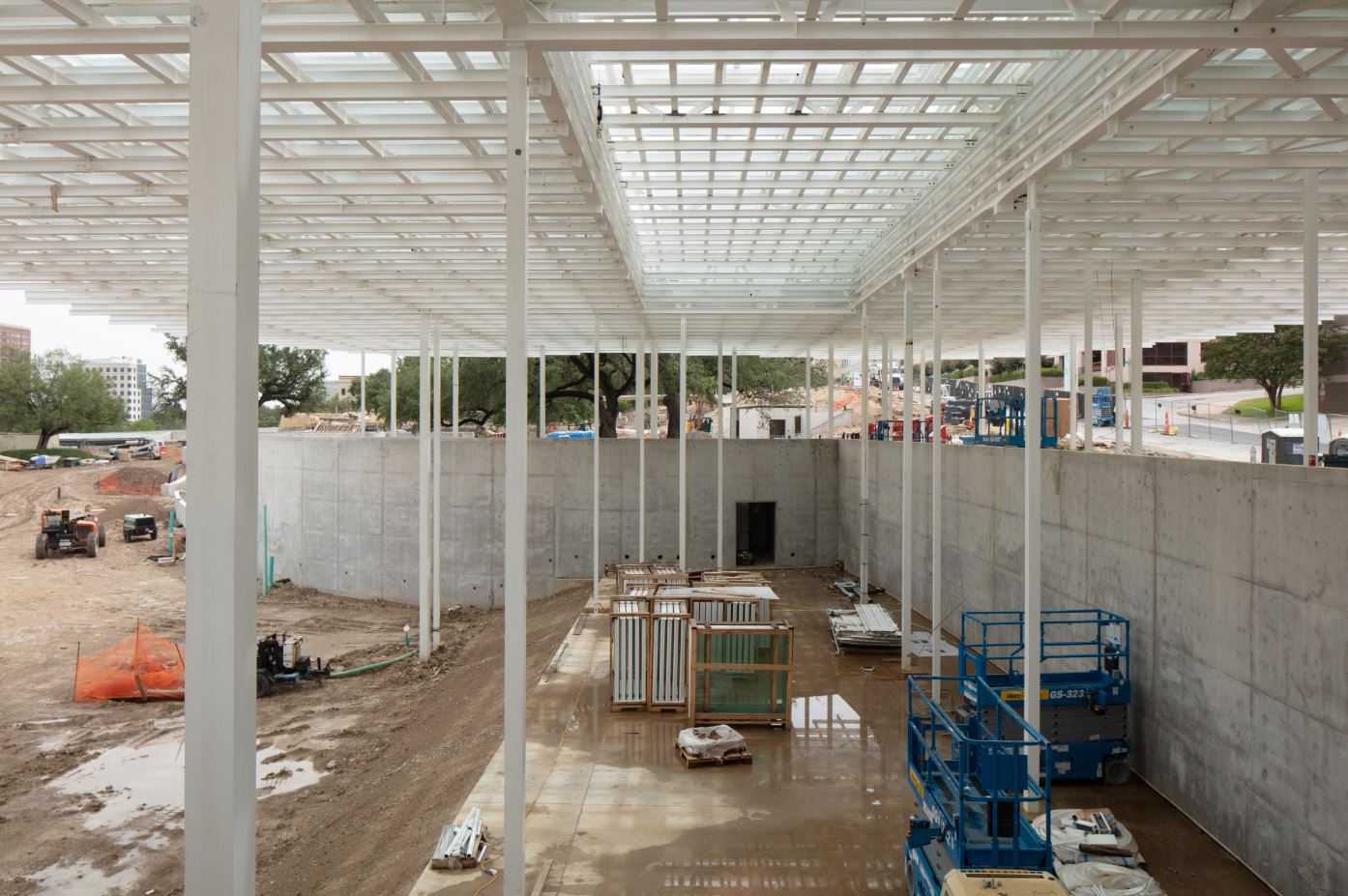 View of underside of canopy from edge of stage. Courtesy of Guy Nordenson & Associates, Photo by Richard Barnes