The massive earthquake that struck central Mexico in 2017 devastated communities, including Jojutla, an inland municipality about 90 miles south of the nation’s capital. As multiple government agencies addressed its critical loss of homes and infrastructure, Infonavit—a federal organization that usually focuses on workers’ housing—recognized the pressing need to rebuild public spaces as part of the healing process. “It was a brilliant and unexpected insight,” says architect Derek Dellekamp, principal of Dellekamp/Schleich (now Dellekamp Arquitectos). Infonavit—in collaboration with community-development agencies and other organizations—produced an urban-reconstruction plan and commissioned Dellekamp and AGENdA Agencia de Arquitectura, a Colombia-based architectural firm, to codesign a chapel on a prominent site: in a centuries-old sacred-buildings precinct, alongside Jojutla’s main plaza. 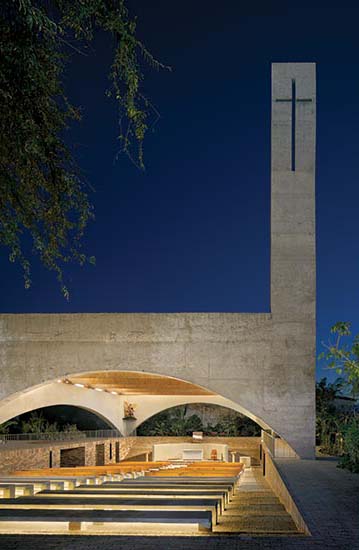 Though the compound includes 16th-century structures, the new chapel would replace an undistinguished church, irreparably damaged by the earthquake but barely 20 years old. Part of the mandate was to rebuild quickly, but with high quality. Three months after the architects received Infonavit’s call, their construction documents were done, and, about a year later, the $1 million project reached completion. “When it comes to emergency reconstruction,” says AGENdA principal Camilo Restrepo Ochoa, “that’s very high speed for Mexico.” 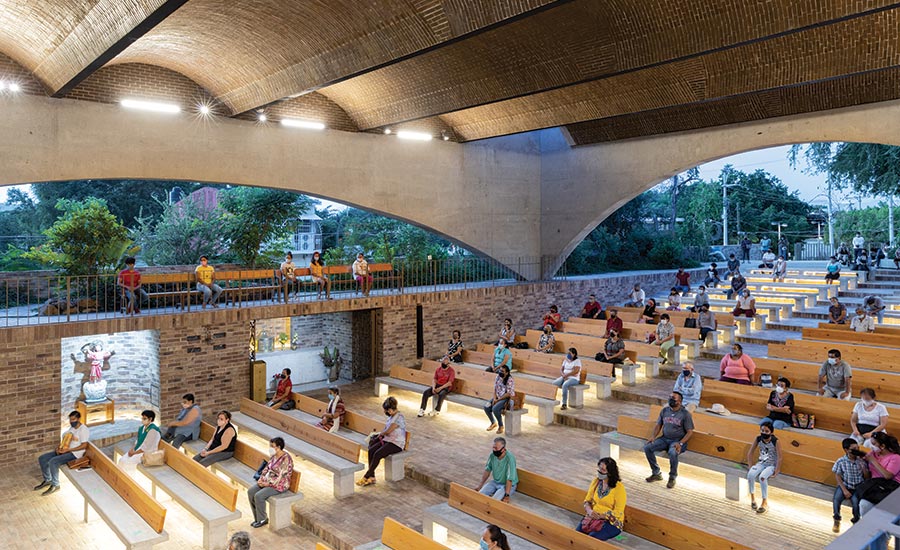 The resulting 4,840-square-foot building, the Santuario Señor de Tula, is an open-air sanctuary with exposed-brick barrel vaults and an overarching reinforced-concrete structural shell that was cast in place, resting only on its four corners. A broad arch in each of the enclosing walls opens the space, in this temperate climate, to daylight and air. With 79-foot column-free spans, the structure is a classic basilica in plan but expressively reinterpreted in section, embracing the congregation and eliminating the need for conventional facades, or any ornamentation beyond the structure itself. Still, the design integrates stripped-down allusions to traditional church elements, as in the altar area’s curving, freestanding concrete wall, evoking an apse; or the vertical towerlike projection on the entry facade. A cast-iron bell, more than a century old and toppled by the quake from a neighboring religious building, now hangs securely on this elevation. Drawing in parishioners and raking the seating, the brick-paved ground plane slopes down toward the altar. Upslope, that incline spills out from beneath the building canopy, placing 11 of the 25 rows of pews entirely outdoors—to accommodate overflow gatherings on days like Christmas and Easter, while keeping the sanctuary intimate for daily worship. “Mexico has a long tradition of open-air chapels,” says Dellekamp. “We were very inspired by Felix Candela’s stunning example—not far away, in Cuernavaca—which also slopes out to expand capacity.” 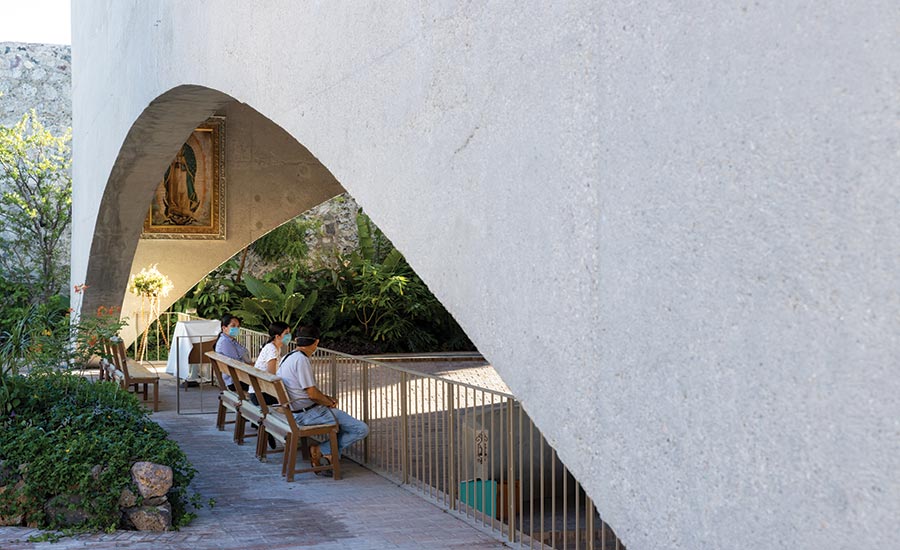 The open-air aspect of the church building eliminated the need for conventional facades (1). The ground plane slopes down toward the altar, where a curving concrete wall evokes an apse (2). Photos © Iwan Baan 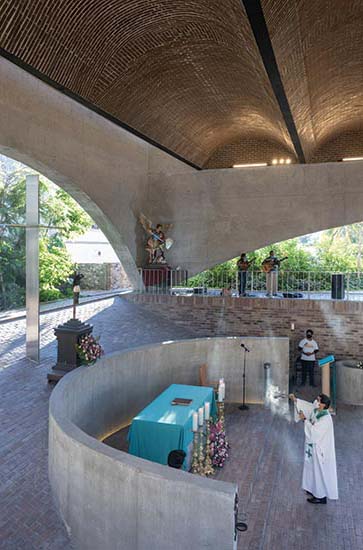 The Jojutla design accommodates uncertainties about construction quality, as well—since the contractors had experience only with roadways and bridges, not actual buildings. “We kept detailing to a minimum and drew on their knowledge of concrete, with the understanding,” says Restrepo Ochoa, “that the exposed material’s brutality would only enrich the results.”

Completed last year, the sanctuary (also designed to host lectures and other events) has become a community magnet. “Many people have expressed gratitude that it’s actually happened, especially after so much skepticism about what the government would accomplish for them,” says Dellekamp. Fortuitously, the open-air concept has also been a godsend to worshippers in the time of Covid.