This website requires certain cookies to work and uses other cookies to help you have the best experience. By visiting this website, certain cookies have already been set, which you may delete and block. By closing this message or continuing to use our site, you agree to the use of cookies. Visit our updated privacy and cookie policy to learn more.
Home » A Mausoleum in St. Louis Revives the Funerary Form at its Historic Cemetery
ProjectsBuildings by TypeSpiritual Projects

A Mausoleum in St. Louis Revives the Funerary Form at its Historic Cemetery

A mausoleum had not been built at Bellefontaine Cemetery in St. Louis for over 70 years. Now, a prominent local businessman has brought the funerary form back to life at the historic burial grounds. Since its establishment in 1849, Bellefontaine—the first cemetery west of the Mississippi to be created as part of the Rural Cemetery Movement that began in the 1830s—has witnessed the construction of many striking mausoleums. Notably, a Gothic Revival pile was erected in 1921 for the family of Adolphus Busch, co-founder of Anheuser-Busch. Before that came the Wainwright Tomb (1891), a domed-cube decorated in stylized floral patterns designed by Louis Sullivan for another local brewer, Ellis Wainwright. (Ellis also commissioned Sullivan to design the 10-story Wainwright Building in downtown St. Louis; both are on the National Register of Historic Places.)

But Bellefontaine’s role as a final resting place for the city’s elite had diminished over the years, and mausoleums—often small, temple-like structures—had lost prevalence with the growing popularity of cremation beginning in the 20th century. Architect Thomas Wall of local firm Mitchell Wall was approached in 2016 to design a mausoleum for a family for whom he had been designing a house. Recently completed, the $5 million tomb is a contemporary take on the age-old monument that incorporates historic and artisanal elements.

“It was like a grad school project,” says Wall. “These types of commissions don’t exist in the real world.” But Wall describes the family as “deeply spiritual,” and while they ultimately went with something more traditional for their residence, they gave Wall carte blanche—and no budget—for the mausoleum. 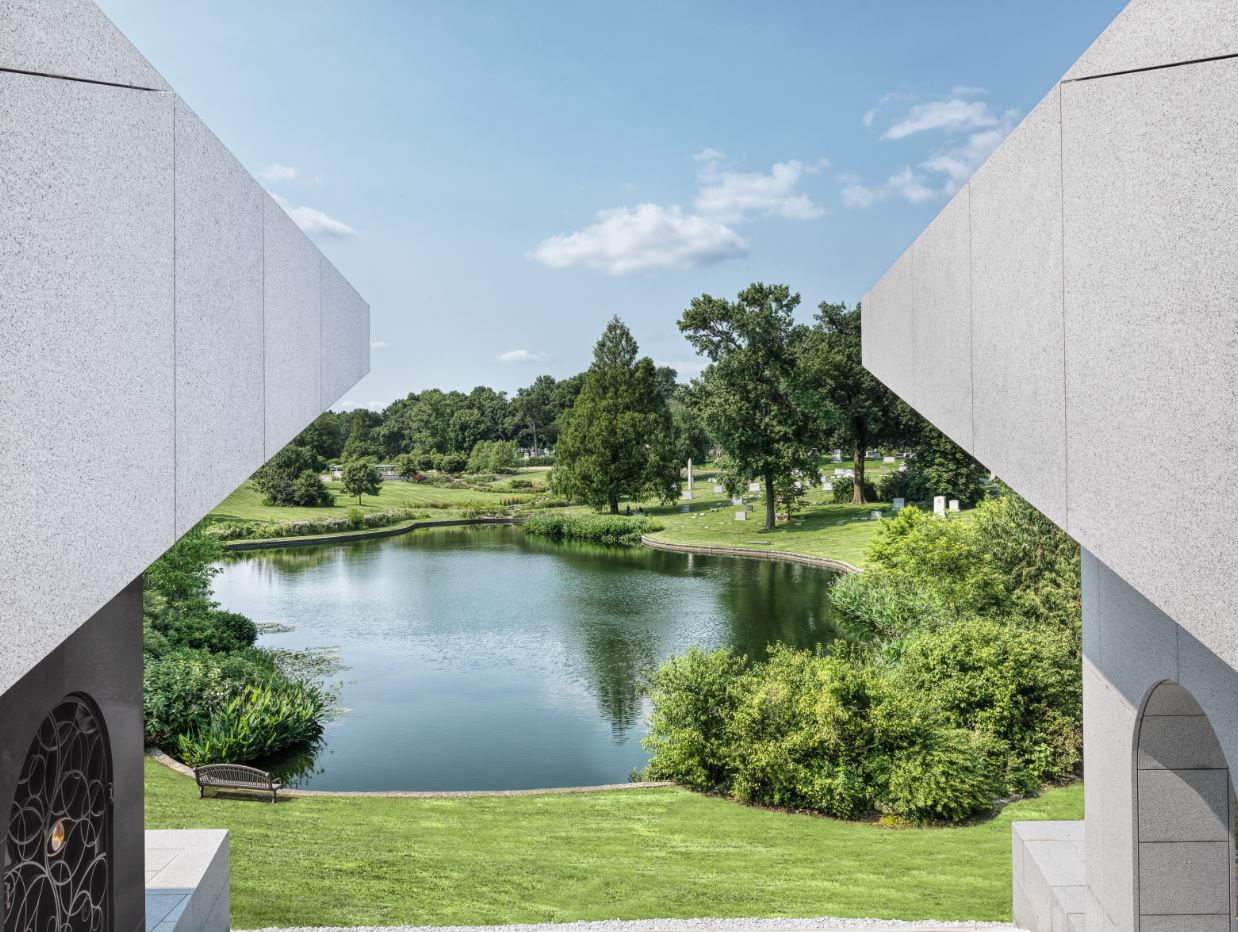 The structure is meant to not only entomb the deceased, but to be enjoyed by visitors, offering bird’s eye views of the nearby lake and surrounding arboretum from its terrace. Photo © Alise O’Brien, click to enlarge.

The process began with selecting the site, which Wall’s self-made entrepreneur client initially objected to; “I lived downhill from people all my life.” But its position just feet away from a small lake made for a beautiful setting. And the 26-foot-high structure Wall ended up designing was built on a six-foot-high berm, so the rooftop terrace offers stunning views of the bucolic landscape, an accredited arboretum for 9,000 trees and shrubs. 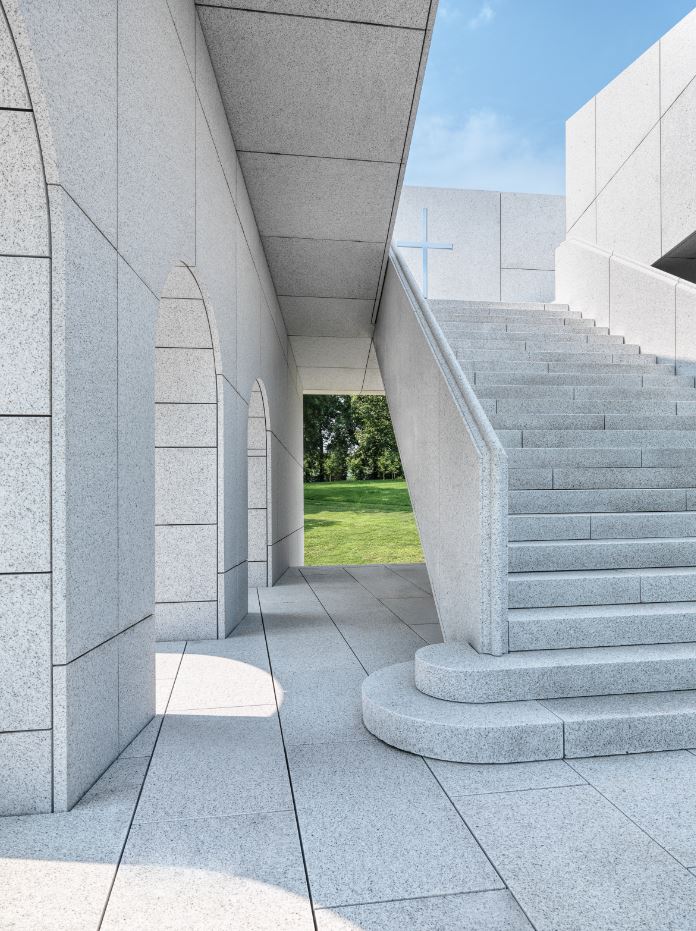 A stairway leads to an open rooftop terrace, meant to symbolize the afterlife. Photo © Alise O’Brien

Wall then researched historic mausoleums in New Orleans, where he found perspectival drawings from the 1920s that triggered the design. That aspect is most emphatically expressed by the oblique stairway that pierces the center of the mausoleum. Using the client’s Christian faith as the basis for the design, Wall created a grid system that overlaps the Holy Trinity with the three primary elements of man: mind, body, and spirit. The intersection of these grid lines establishes the location for the monument’s meaningful moments. The resulting 2,850-square-foot volume is both pure geometrically, and dynamic experientially. Wall calls it a “metaphorical journey” from life (outside) to death (crypt level) and finally ascending to the afterlife (rooftop). 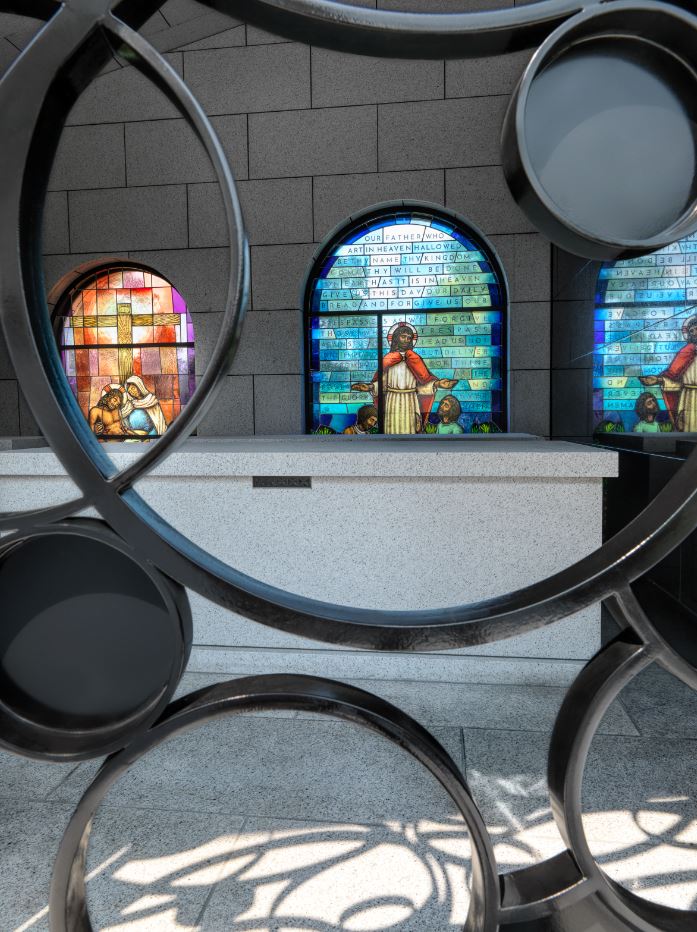 The stained glass was made by Emil Frei & Associates, a 123-year-old artisan shop that also created the mosaics for the Cathedral of St. Louis, the largest collection of mosaics in the world. Photo © Alise O’Brien 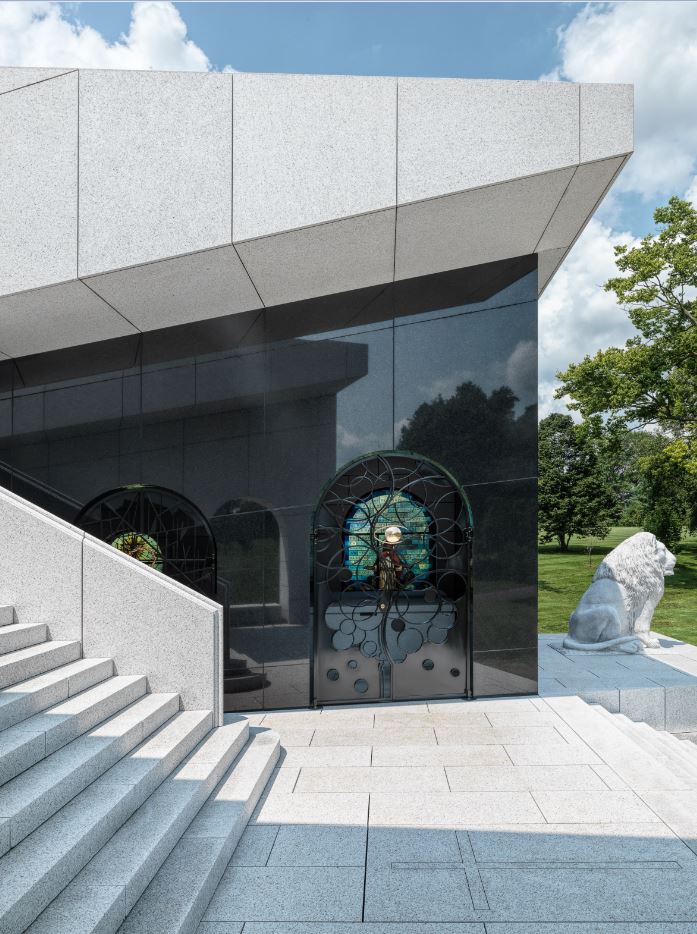 The crypt is enclosed in polished black granite and is only accessible to family members. Photo © Alise O’Brien

Bellefontaine required that the structure be made from granite, since other materials like marble and limestone corrode due to the acidity there. The crypt is enclosed in polished black granite and adorned with stained glass and decorative metalwork. While currently unoccupied, it has space for eight interments. The textured white granite of the overall construction is two-feet thick in places, including the spot where a cruciform is cut into the top of the staircase. Sunlight coming through the outline of the cross projects its silhouette onto an oversized granite panel at the base of the stair, beneath which is a time capsule for family mementos. 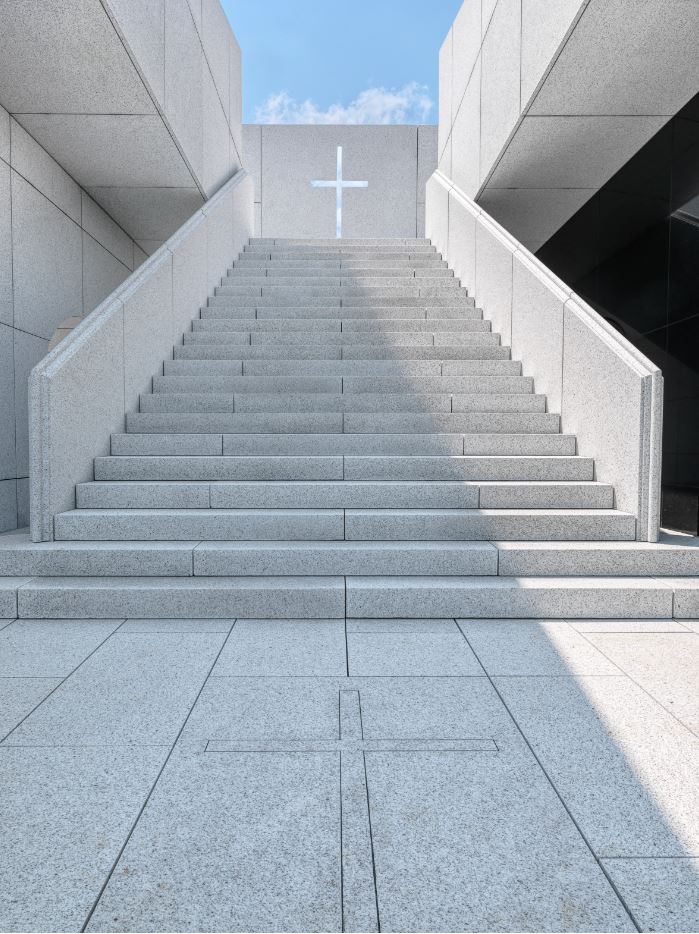 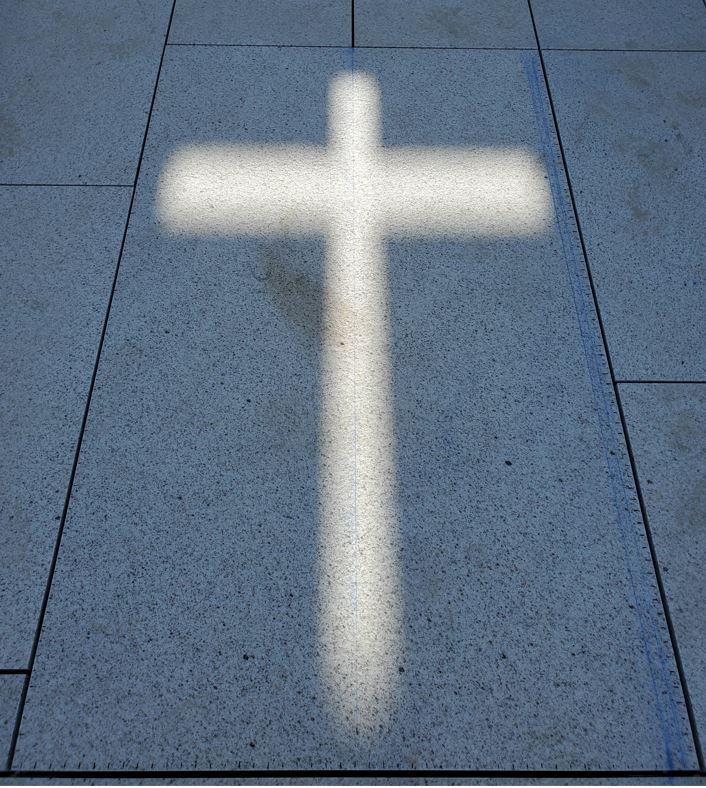 Light coming through a cruciform cut into the top of the staircase (1) is projected onto an oversized granite panel at the base of the stair (2) to perfectly fill a cross etched into the panel at 11:58am on December 20th, an important date for the family. Photo © Alise O’Brien (1), Thomas Wall (2)

The time capsule is just one element that suggests this mausoleum is not only a tomb for the dead, but a place to be experienced—enjoyed even—by the living. It provides a space for contemplation and meditation. “It is meant to be there forever,” says Wall. “That is the endless nature of funerary design.” As for Wall’s client, he and his family could not have been happier with the outcome. After seeing the design, his wife revealed, “I could spend eternity there.” 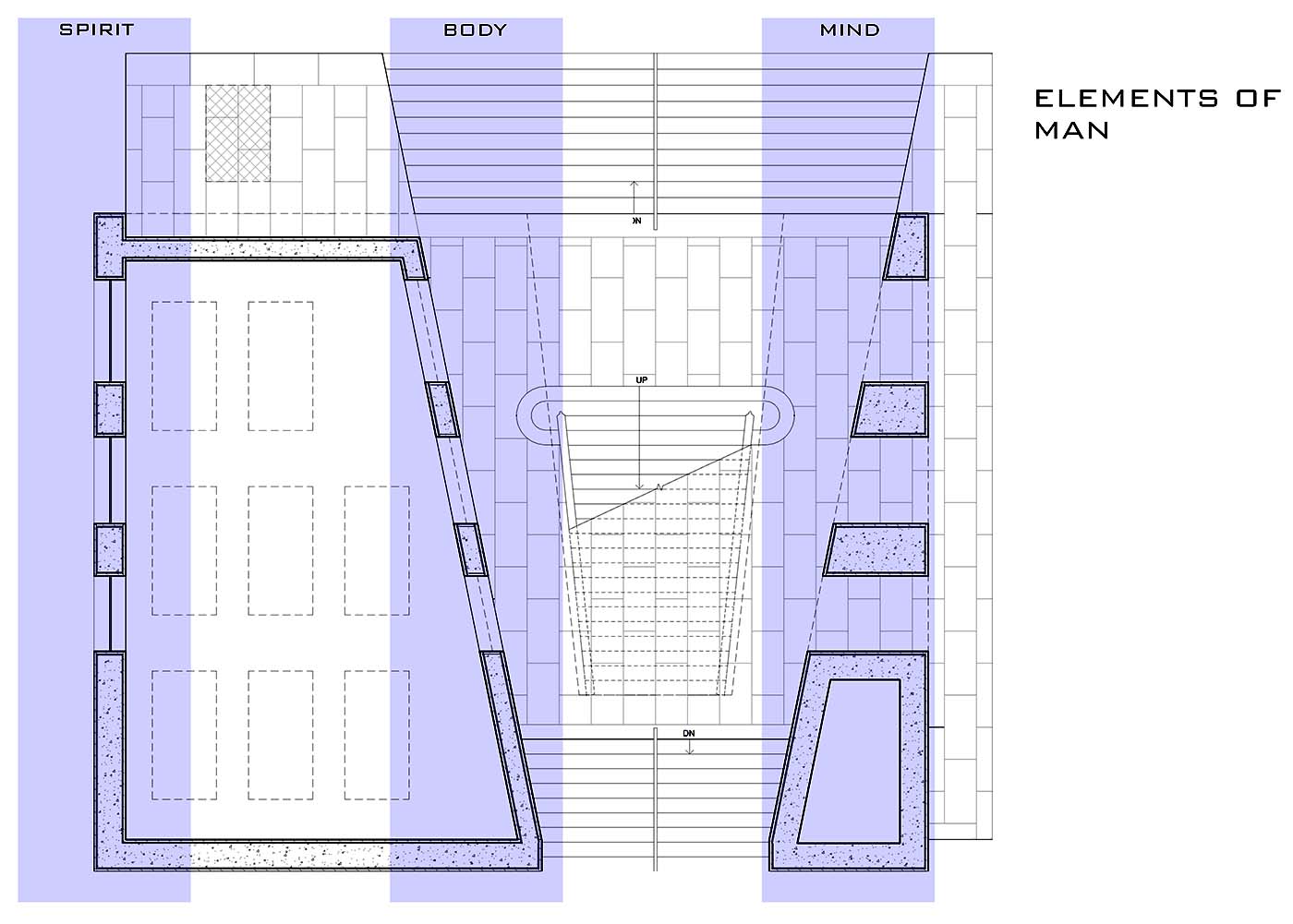 The Arcus Center for Social Justice Leadership at Kalamazoo College

'Toward a Concrete Utopia' at MoMA Explores the Architecture of Yugoslavia