This website requires certain cookies to work and uses other cookies to help you have the best experience. By visiting this website, certain cookies have already been set, which you may delete and block. By closing this message or continuing to use our site, you agree to the use of cookies. Visit our updated privacy and cookie policy to learn more.
Home » London’s Courtauld Gallery Unveils a Meticulous Makeover as it Reopens
Architecture NewsProjectsBuildings by TypeMuseums & Arts Center Projects

“If we want things to stay as they are, things will have to change,” says Tancredi, the anti-hero of the Italian novel The Leopard. It is perhaps unfair to compare the Courtauld Gallery to the 19th-century Sicilian aristocracy, but few words better sum up the meticulous three-year, $76.5 million makeover that the institution has undergone. The discreet architectural shifts are at times so ingenious as to be invisible, and at others so sensitive that one assumes the multiple subtle interventions, introduced by Witherford Watson Mann Architects, had always existed.

The age of the Courtauld has always been deceptive, but thanks to the opening up of the building to natural light, particularly in the Great Room at the top floor, it now feels timeless rather than old before its time. The art institute, a unique combination of collection, teaching center, and gallery, was only established in 1932. Its spectacular collection of old masters—particularly its stunning haul of Peter Paul Rubens—contributed to the feeling that it had been around forever, but primarily there was the age and plan of its home. It inhabits the northern wing of Somerset House, a great Neoclassical Georgian quadrangle by the architect Sir William Chambers which has stood since 1776, although the Courtauld has only been a tenant since 1989. 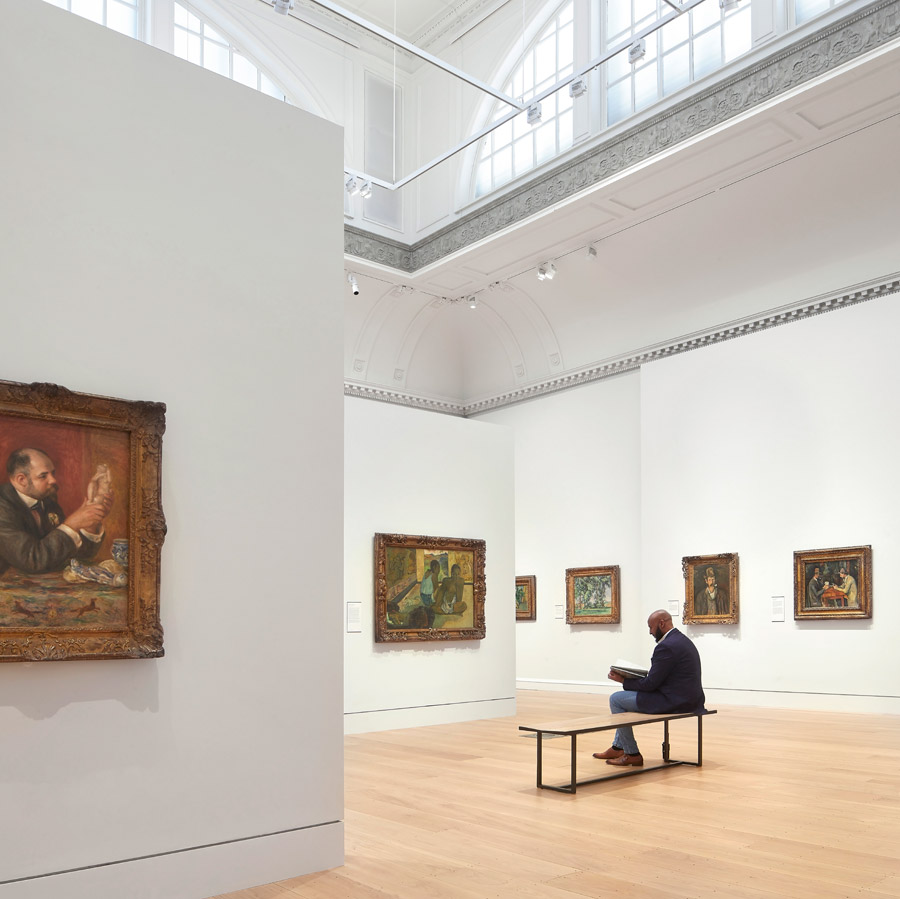 In the Great Room on the top floor, a false ceiling was removed and the clerestory has been revealed. Photo © Hufton+Crow 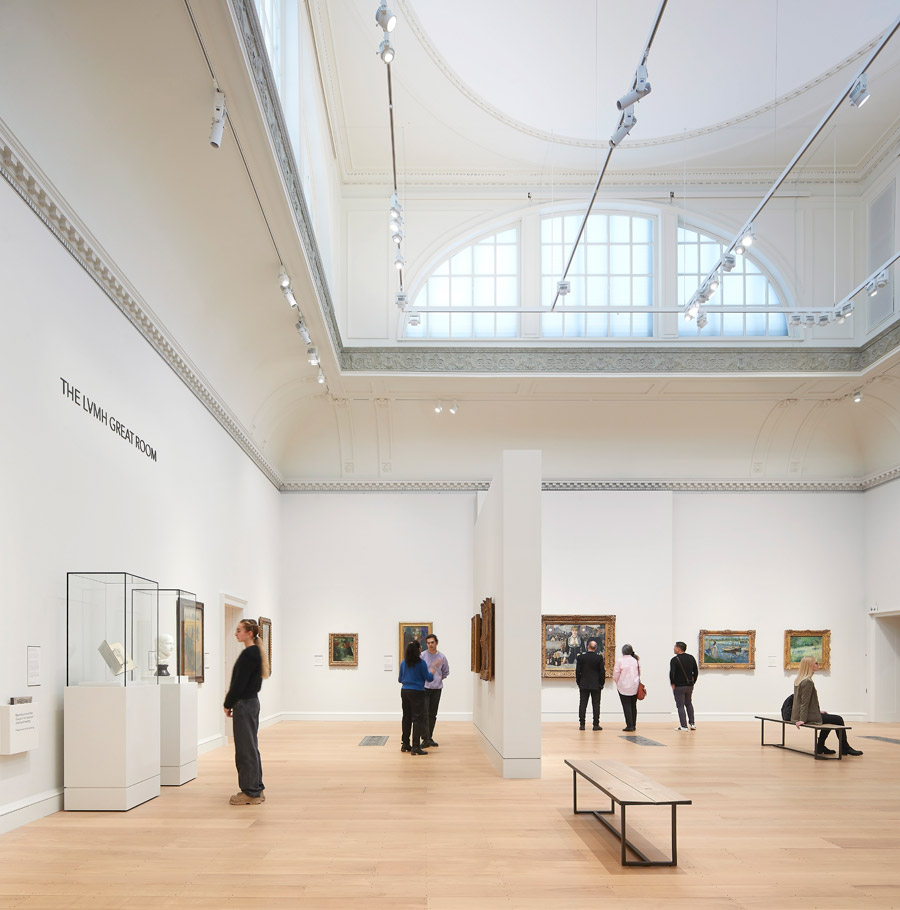 The fit was very comfortable, perhaps too comfortable. Somerset House was designed and built as the intended home of several key institutions in the Georgian civil service. It was the headquarters of the Hawkers and Pedlars Office for example, but also for a spell the Royal Academy. Chambers’ interior layout was decidedly domestic though. Despite its palatial facade facing the Strand, the arrangement effectively was six separate houses, with individual staircases. Although the former director of the Courtauld (and Soviet spy), Anthony Blunt, had long died by the time the Courtauld had moved into the northern wing of the building, an atmosphere of connoisseurship and secrecy clung to the timber clad staircases. 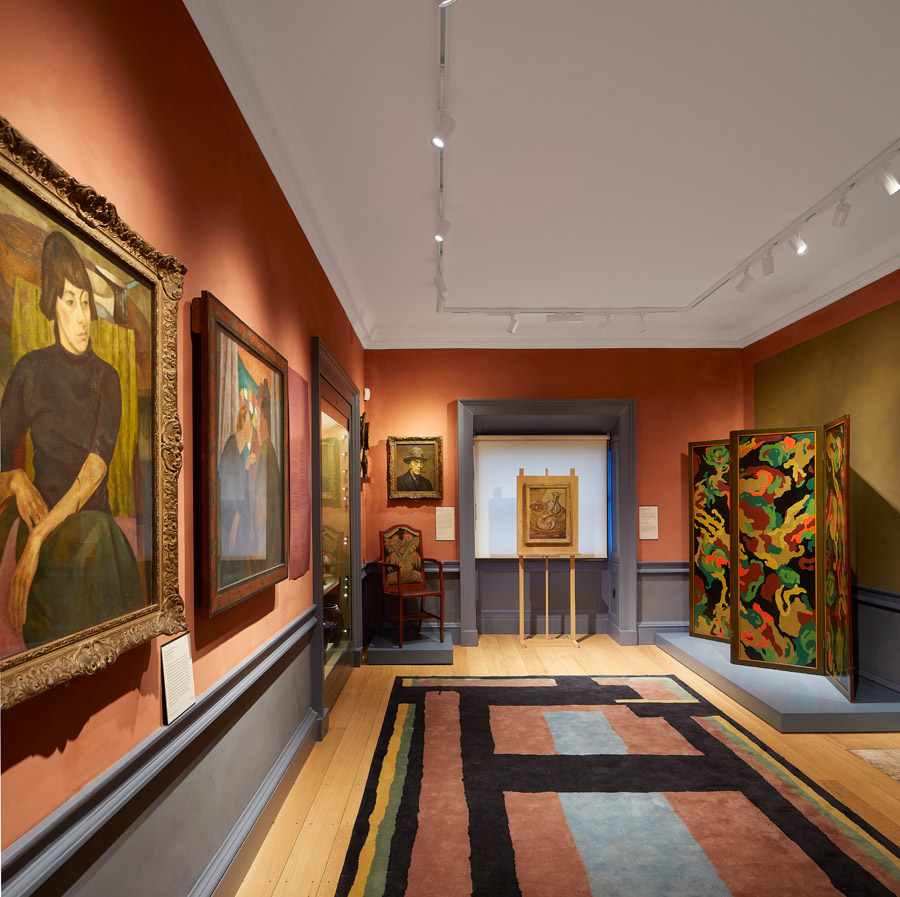 The Bloomsbury Room at The Courtauld Gallery. Photo © Hufton+Crow

One of the great successes of this conversion is that all the joy of the intimacy is retained, with nearly all of the inconvenience gone. The Courtauld’s unique offering was always the opportunity it gave visitors to see works like Van Gogh’s Self Portrait with Bandaged Ear and Manet’s A Bar at the Folies-Bergère in a cozy setting. It always felt as if you were discovering the work in an attic for the first time, one of the place’s many charms. Still, the circulation, up and down Georgian staircases, was laughably cramped and a trip through the galleries generally ended with the arrival at a locked door and visitors walking back on themselves.

The highly detailed restoration and reworking of the building by Witherford Watson Mann, who was recently shortlisted to reimagine London’s National Gallery, does not totally erase those conditions, but it does provide even greater opportunity for that sense of discovery. There are only a handful of moments where the change to the building is made clear: a new ticket office, for example, where the Medieval gallery once stood on the ground floor. Two new elevators have been added: one to the conservation center in the western side of the wing, the other for gallery visitors. The previously inaccessible cellar, historically used to store coal, has been scooped out to create space for a new shop and a passage that links the west and east portions of the northern wing. To achieve this, the construction team propped up the entire listed building, creating, in a single pour, new concrete columns which allowed the cellar to be opened up. Given that this work is just legible in the way that the concrete has been left separate to the brickwork of the vaults, it seems only fair that the architects permitted themselves one moment of indulgence: a cantilevered concrete stair down to this basement level from the new reception off the main entrance on the first floor. 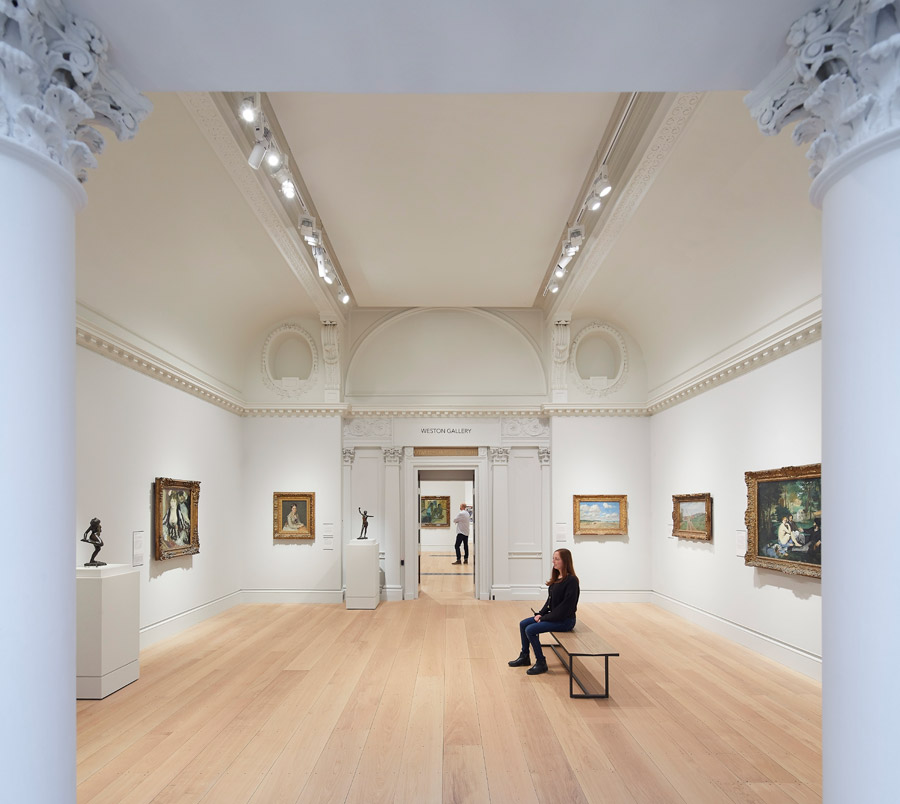 One of the great successes of the transformation is that all the joy of the intimacy is retained, as in the Weston Gallery. Photo © Hufton+Crow

But the rest of the work one might describe as radically conservative. The new additions are less legible as in other historical work by Witherford Watson Mann, such as the Astley Castle (RIBA Stirling Prize 2013), but then the variety of heritage conditions in each room at The Courtauld prevented the architects from making uniform decisions across the building. Parts have been removed, cleaned, and then replaced. Every door has been taken off its hinges and had integrated access control and fire-proofing added before being re-stained or grained according to its original condition. At the top of the building, the false ceiling that closed out the Great Room gallery has been taken down to reveal the clerestory.

Stephen Witherford, the partner in charge of the project, says, “A project of this nature is a complex metabolism where the big moves are completely enabled and sustained by the thousands of small adjustments–fire safety, access, security, environmental control. Everything is an intervention and everything is a one–off.” Rather than engineered floors, individual floorboards are used throughout, to allow access to the complex services threaded between the over-two-hundred year old joists beneath the floor. Often these joists are arranged at strange angles, meaning that the screws for the boards have to follow them. All the ventilation pipework that once ran vertically in the walls between the flues from the fireplaces has been removed, and it now traverses horizontally across the ceiling and floors, with screens embedded into the ceiling mouldings. Chandeliers have been replaced by more modern lighting and the art is now the focus rather than the interior decoration. 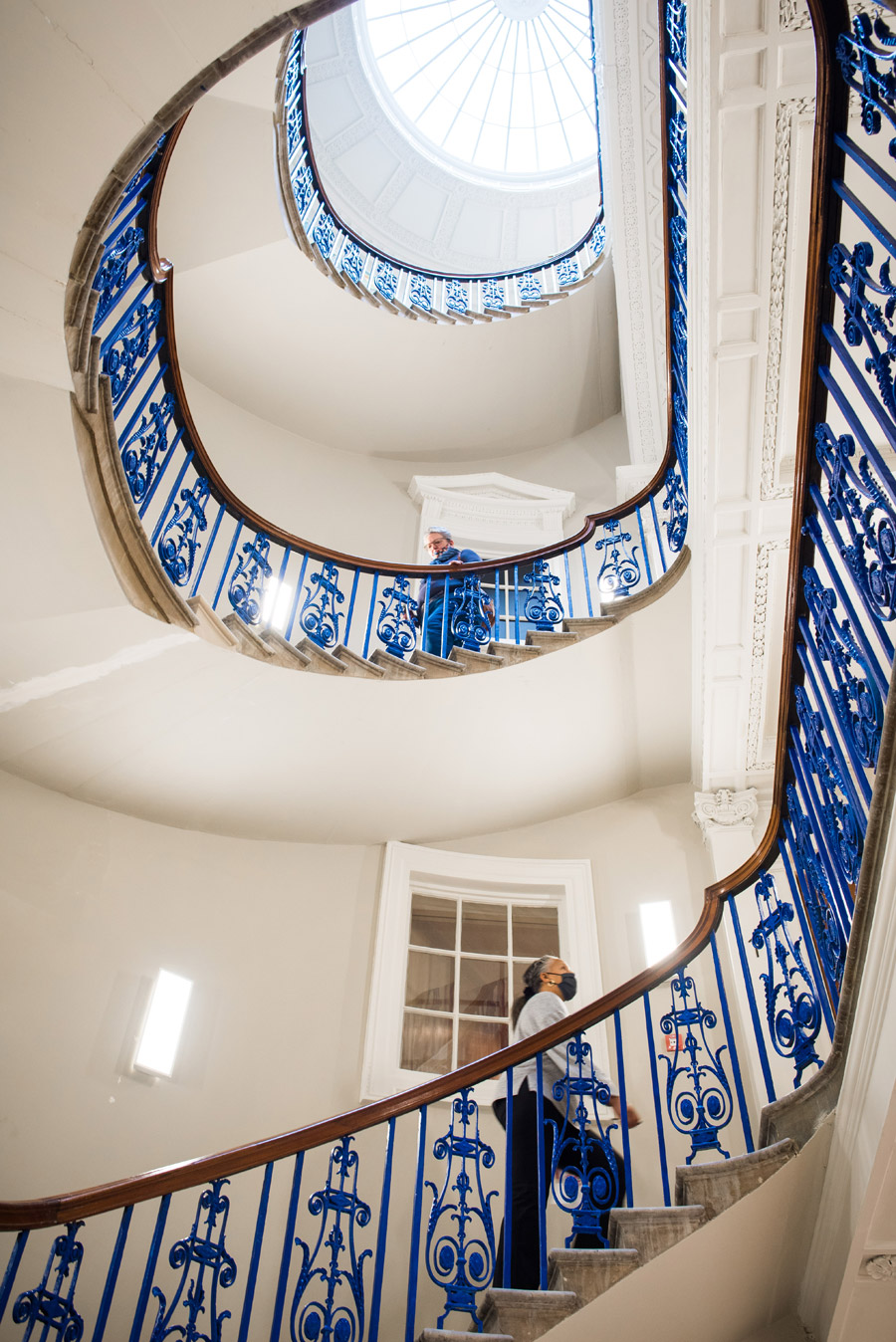 A staircase at The Courtauld Gallery. Photo © Jim Winslet

Particularly noticeable is the greater provision of gallery space on the second floor, which was previously legible to the visitor as a layer of locked doors between the entrance and the first gallery spaces they arrived at. Noticeable too are the conversions of attic spaces on the top floor, which not only provide extra hanging space for work that communicates with the Impressionist blockbusters in the adjacent Great Room, but gives that space a sense of culminating the visitor experience.

The shift in experience is achieved accumulatively: the several major, and the many minor, interventions contributing to a greater sense of space, bringing the artwork to the foreground. In fact, it is amazing how different the experience of extra space is, given that there is only 43 additional linear feet for hanging paintings. What has changed though is the range of gallery sizes and their ability to be opened and closed in relation to each other, allowing great variety to curators and their audiences. This increase in flexibility for exhibiting also has the benefit of making the unique relationships between the collection, the galleries, and the institute more porous, though perhaps not as much as the Courtauld’s management and the architects would have liked.

However, the results mean that the gallery can, if anything, double down on its previous strengths. Given the range of its collection, it is now uniquely placed to present far more intimate, assiduously curated shows than before. The change has done it good. 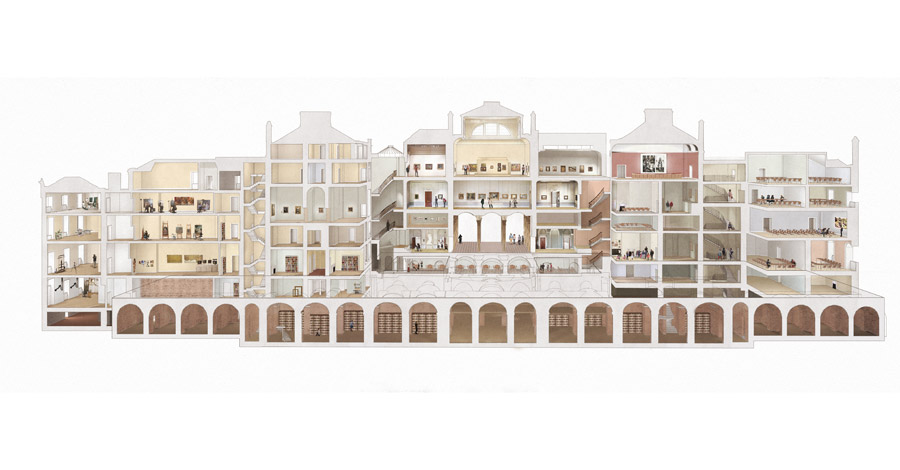 John McAslan + Partners Finish Its Refurbishment of The Burrell Collection