By day, the long-awaited M+ art center crackles with the energy of visitors and staff buzzing about. But as soon as the sun sets, the museum takes on another life, its harbor-facing facade illuminated by 5,600 LED tubes, from afar resembling a giant television screen. Words, numbers, pictures, and videos flash though the night, announcing the ambitious new institution, billed as a museum of visual culture, as seen from a Hong Kong perch. 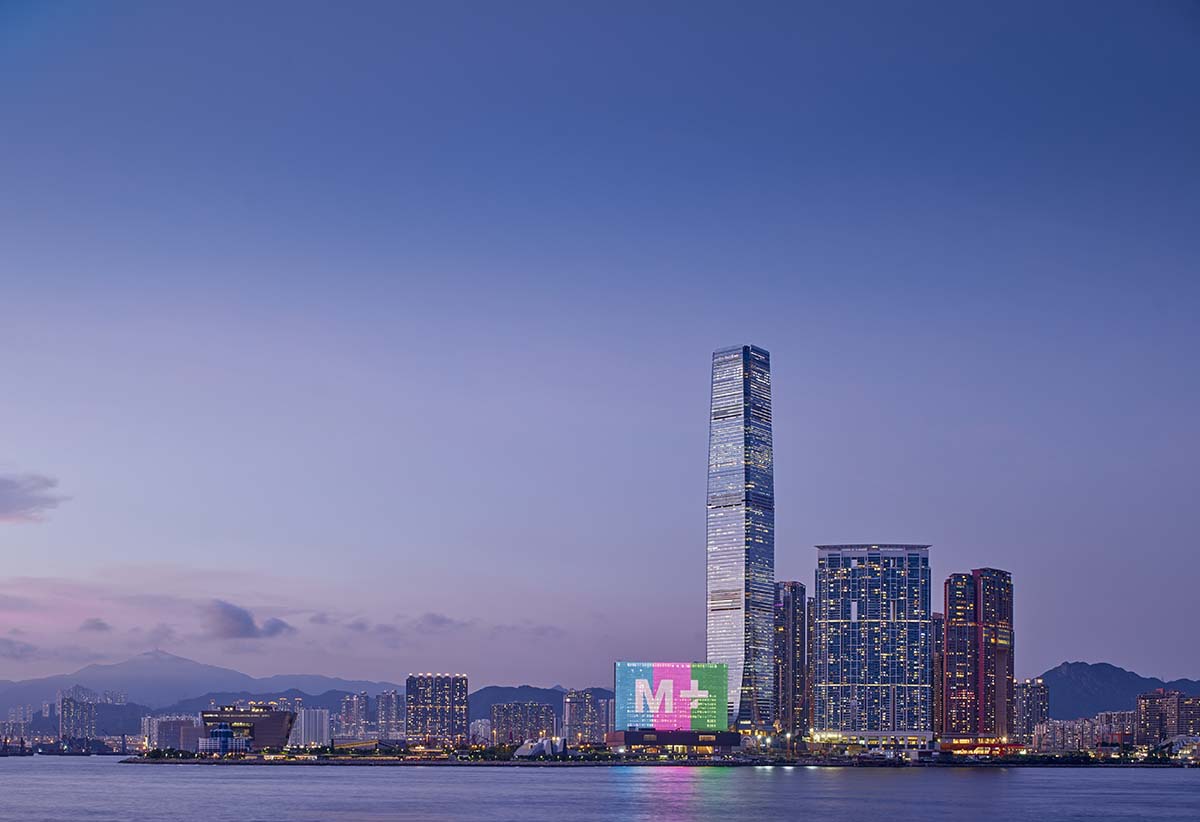 By the time M+ opened its doors on November 12, tens of thousands of Hong Kongers had booked tickets for the first weeks, keen to see the exhibitions and roam the building. Though only 18 stories tall, the museum’s flattish, billboard-like tower, which sits on top of a broad podium, stands out along the metropolis’s dynamic skyscraper-dotted skyline. Designed by the Basel-based Pritzker laureates Herzog & de Meuron, working with TFP Farrells and engineering consultants Arup, the structure and what it represents are notable for both a certain simplicity and an intrinsic complexity.

Located on reclaimed land, the waterfront M+ building stands next to a storage and conservation facility and a 16-story office building for the West Kowloon Cultural District (WKCDA), of which the museum is part. M+ has been one of the most anticipated inaugurations within the $3 billion district, which also features an art park, performance venues, and the Hong Kong Palace Museum (it will showcase antique treasures from Beijing’s imperial collections). 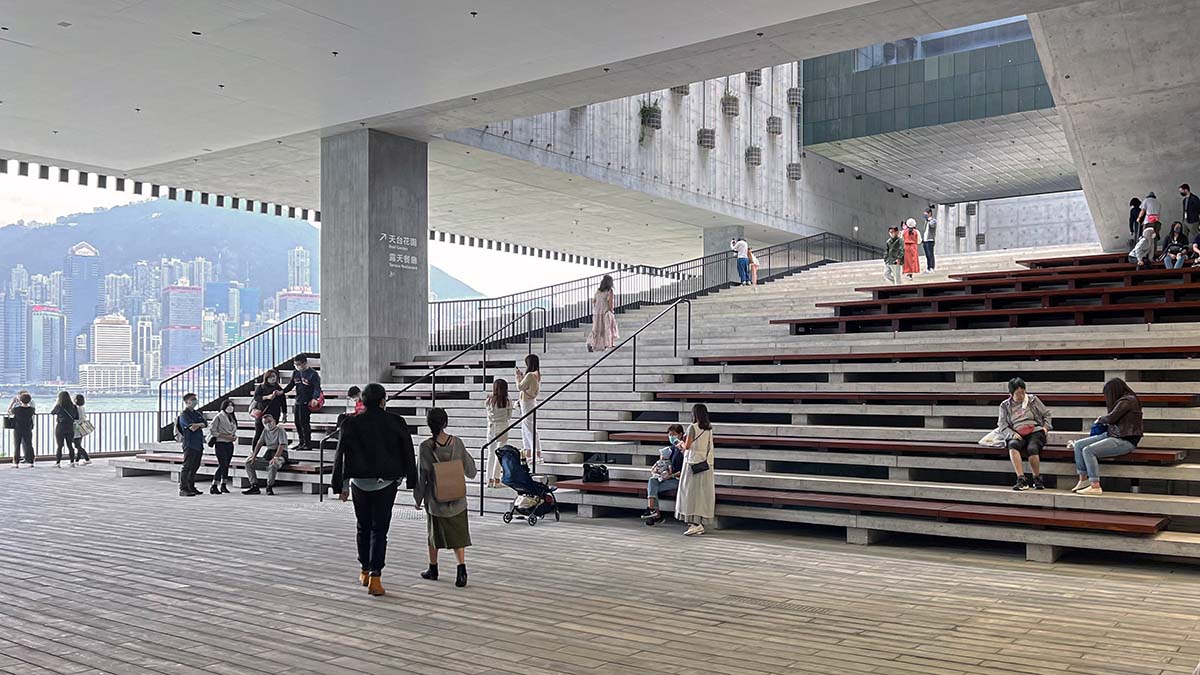 Stairs to the roof garden offer glimpses of the harbor. Photo © Edman Choy

To be sure, the 700,000-square-foot M+ goes against a fashion among cultural institutions for elaborate, eye-popping architecture. Its slender, slab-like tower, enclosing offices, dining facilities, and a members’ lounge, rises from the middle of the nearly square three-story podium, creating a building with an inverted T profile. Below the podium roof and its public garden, M+’s vast horizontal volume houses 33 galleries—amounting to 180,000 square feet to show art—as well as cinemas, an education center, shops, and meeting areas. “The building is not forcing any kind of awkward shape onto the exhibition spaces,” says Ascan Mergenthaler, Herzog & de Meuron senior partner. “It caters to the needs of the people, the art, and the curators.”

The idea for a world-class museum was first announced in 1997, the year that the British territory of Hong Kong officially returned to Chinese rule. In 2010, Foster & Partners unveiled a master plan for the WKCDA, envisioned as the heart of a new center for the arts and civic life in Hong Kong. The years-long consultation process that followed resulted in a concept for a “museum plus”—an institution that would reframe the global conversation about contemporary culture. In 2013, Herzog & de Meuron won an international competition to design the M+ building, which began construction in 2015. 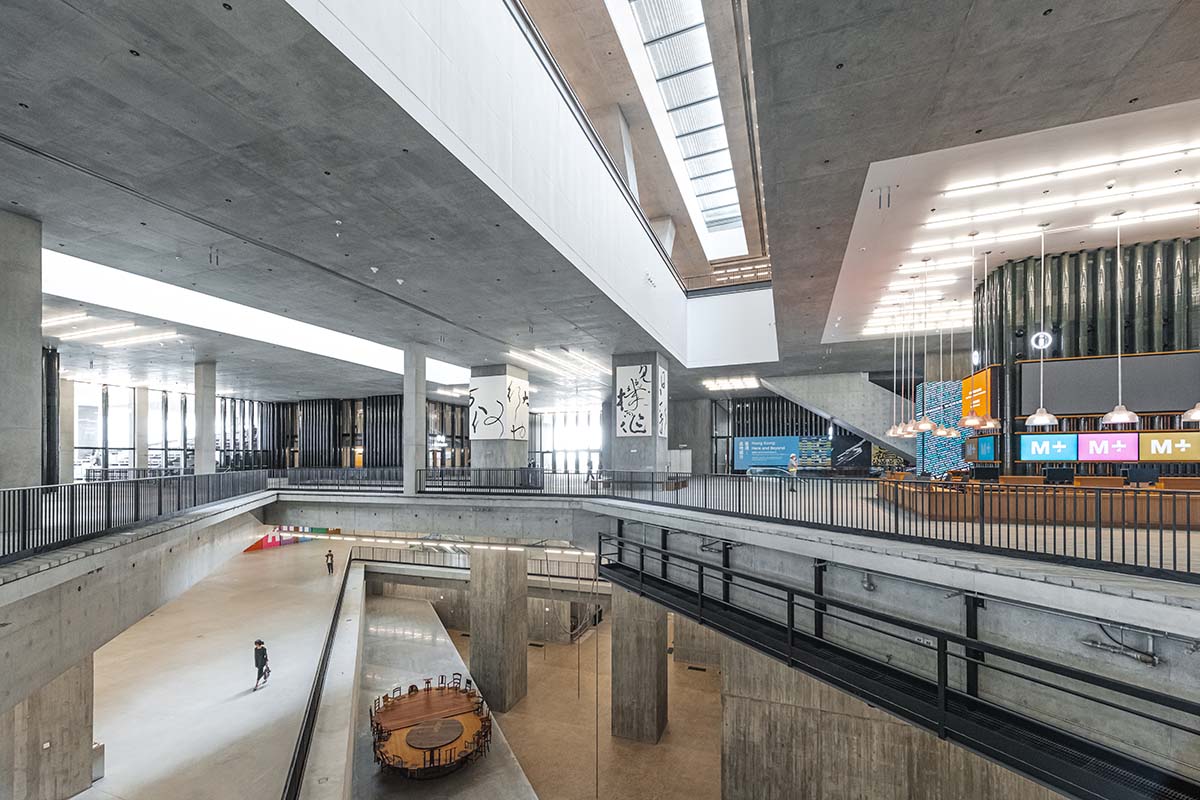 A cut through the main hall slab reveals a zone that sits on top of a train tunnel—an area that the architects have dubbed the “found space.” Photo © Kevin Mak

“They checked all the boxes,” says Aric Chen, former M+ design and architecture curator, who was a member of the jury that selected Herzog & de Meuron. Chen, now director of Rotterdam’s Het Nieuwe Instituut, cites the design’s functionality and flexibility, as well as the architects’ approach to a major engineering issue: the site is on top of a tunnel for the train to the airport. The architects embraced the challenge and transformed it into a defining feature, creating a concrete ledge above the tunnel that can be used to display oversized works or as a stage for performance art. Visitors can peer down into this “found space” from the edges of an aperture carved through the ground-level main hall. From this space, guests catch glimpses of the five mega-trusses that form the support system of the building while keeping exhibition spaces nearly column-free and making the main hall, with its clean sight lines, high ceilings, and exposed concrete walls, feel expansive and slightly industrial. 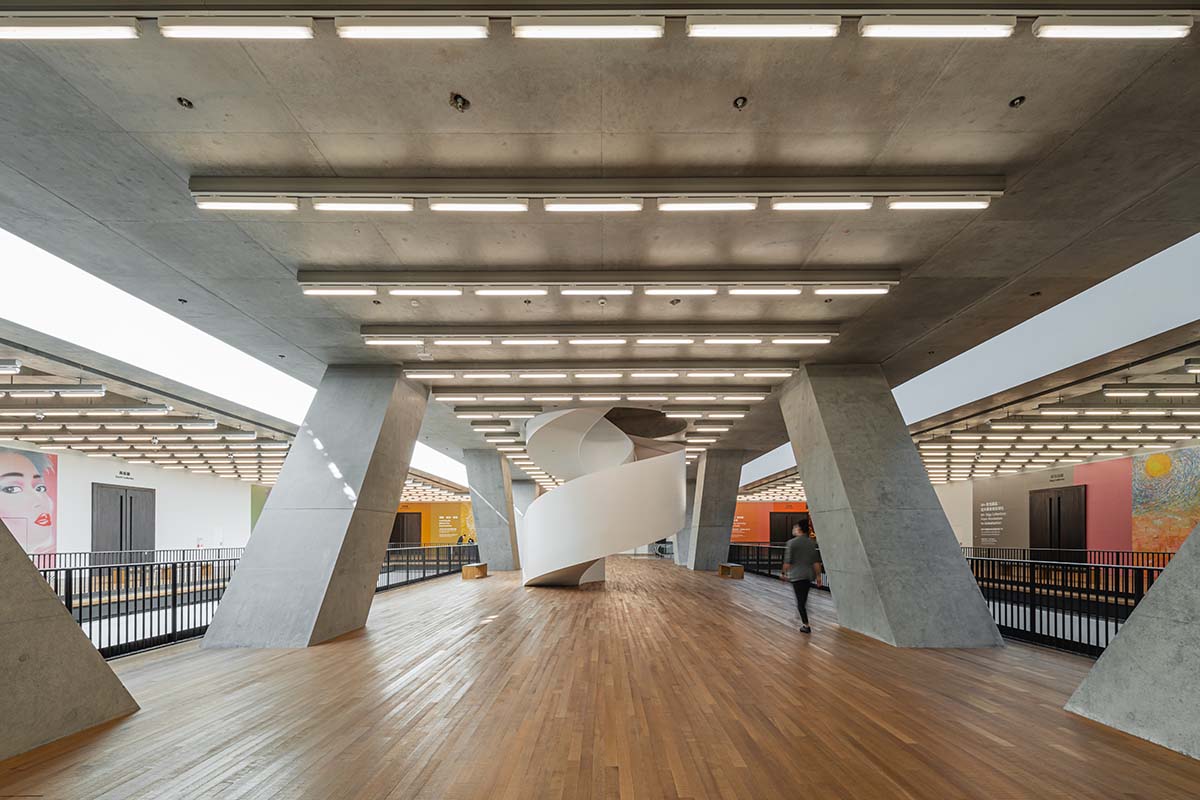 The M+ galleries are located primarily on the second floor and are accessed through an atrium—one of the spaces where the building’s robust structure is on display. Photo © Kevin Mak 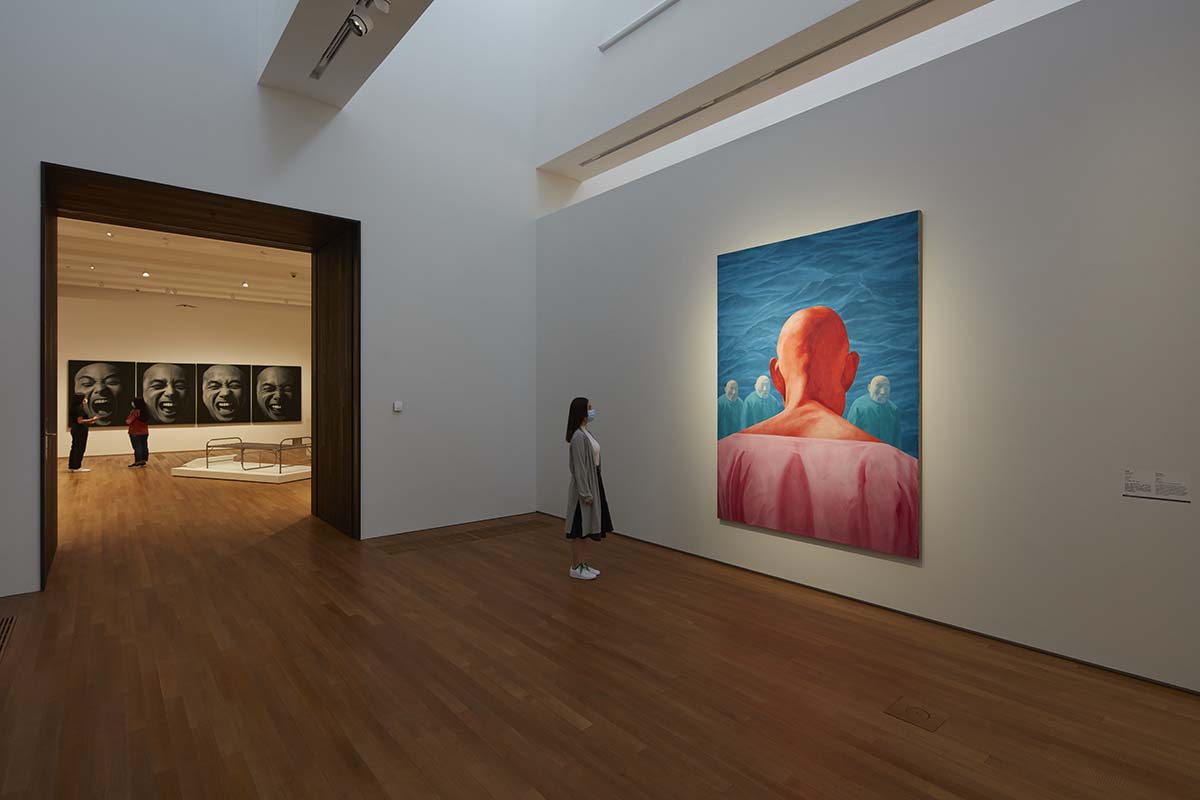 The Sigg Galleries, named after a former Swiss ambassador to Beijing, are dedicated to the collection of Chinese artworks he donated to M+. Photo © Lok Cheng

The galleries, located primarily on the second floor, range from huge rooms to more intimate spaces. The Sigg Galleries, named after a former Swiss ambassador to Beijing, Uli Sigg, is dedicated to his collection of hundreds of Chinese artworks made since the post–Mao Zedong years—a highly significant donation, estimated to be worth hundreds of millions of dollars. One huge, white-walled gallery includes the work of dissident artist Ai Weiwei. (Ahead of the opening, local politicians openly questioned whether some of his work in the collection is in violation of the strict new security law imposed by Beijing on Hong Kong last summer.) Curators say no change was made to the opening-show lineup—which was set years before the controversy—but many worry about future censorship and the potential impact on M+’s global cultural ambitions. 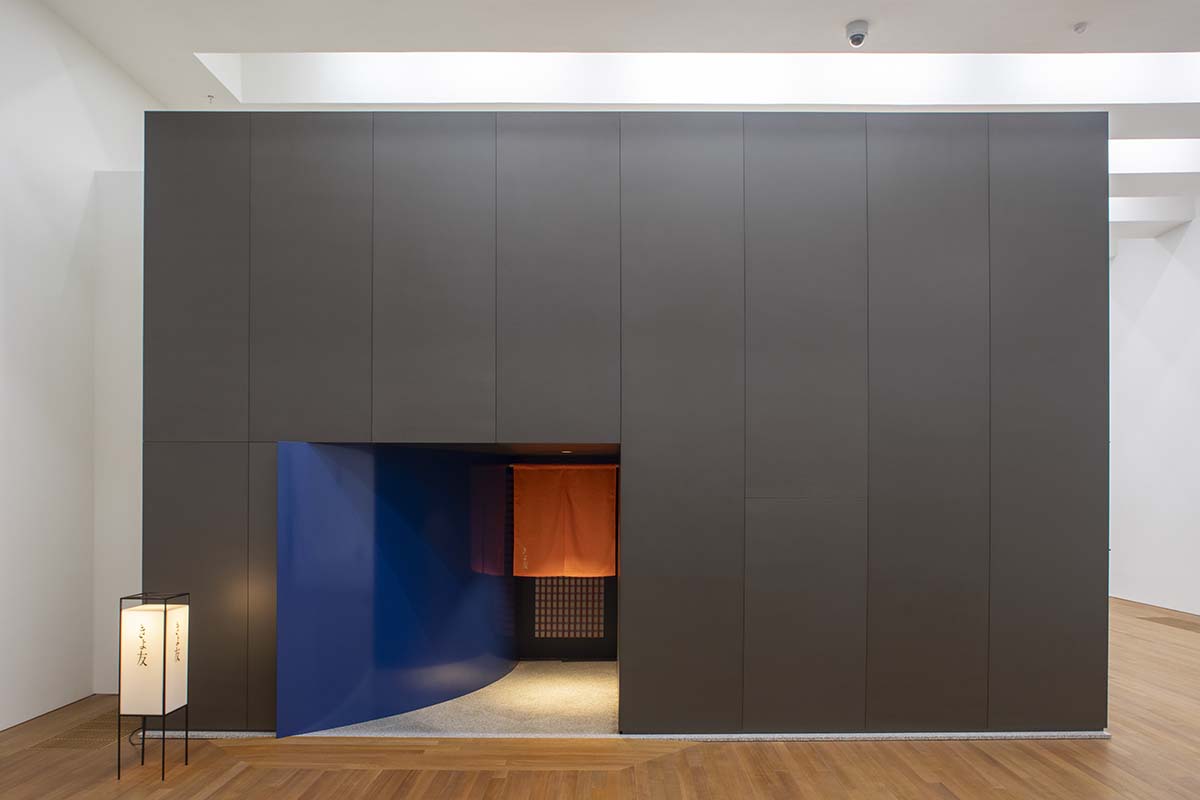 The range of the M+ collection is extremely wide, even including an actual sushi bar by Japanese industrial designer Shiro Kuramata. Photo © Kuramata Design Studio

While most of the exhibition spaces have soaring heights, to allow curators the option of displaying large-scale contemporary art, smaller galleries encourage more personal encounters. In the courtyard galleries, for example, split-bamboo paneling and light wood flooring make for a more human-scaled experience. In rooms that feel almost like cozy treasure boxes are artworks ranging from the small painted booklets by Lebanese artist Etel Adnan to pottery by Ettore Sottsass to silkscreens by Andy Warhol. In one gallery, a glass window frames the view of a plaza below, the way a vista might be accentuated from within a traditional Chinese garden. And the range of the permanent collection of art and design is extremely wide, including, for example, an actual sushi bar by Japanese industrial designer Shiro Kuramata.

By focusing on a strong structure and versatile spaces, the architects underscored the mission of M+: to propose new vantage points for considering and connecting to today’s global visual culture. Says former curator Chen, “With everyone trying to ‘recenter’ the dialogue, M+ is an important voice in that conversation.” 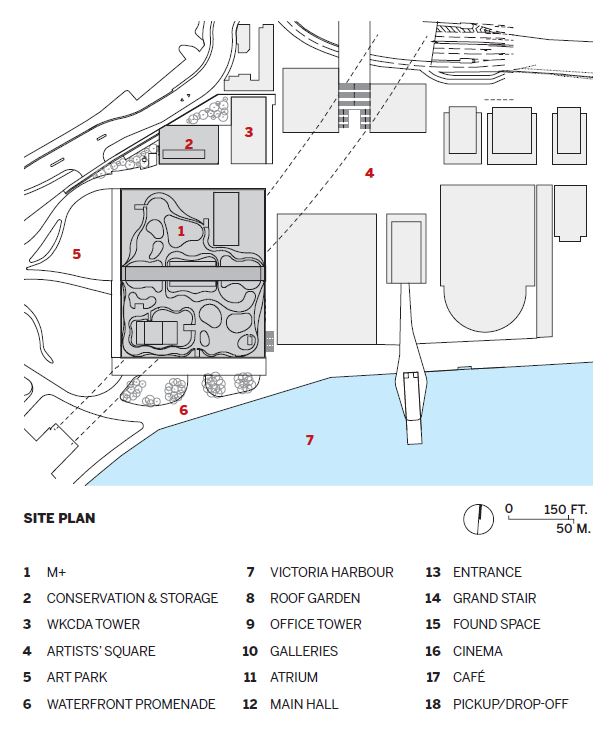 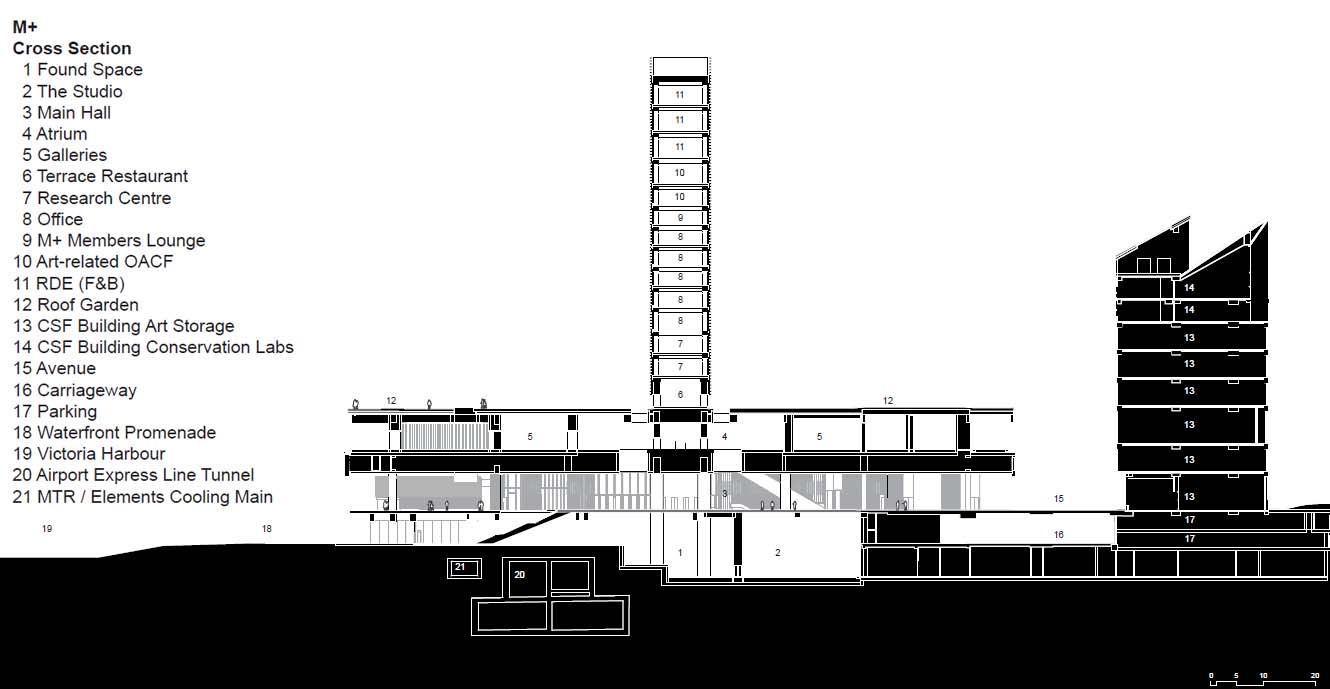 Alexandra A. Seno is a Hong Kong–based architecture and design critic who has written for The Wall Street Journal and The New York Times, among other publications.