The new research and development building for AstraZeneca is a moment of finesse amidst the gargantuan labs and hospitals of a biomedical campus in southern Cambridge in the UK. Belying all the turmoil that the Anglo-Swedish pharmaceutical company has gone through since it began producing Covid-19 vaccines, the three-story, triangular building, called the Discovery Centre, not only provides 205,000 square feet of lab space to over 2,000 scientists, it acts as an architectural centerpiece for AstraZeneca. Herzog & de Meuron have pulled off several clever moves to make it something special.

Big corporate lab buildings tend to be homogenous: not just from the outside, but internally as well. Herzog & de Meuron’s saw-toothed corona solves both issues. The profile of the steel-framed glazing is oriented to the north to draw in soft natural light, unusual for such a building which might be expected to use electrical illumination throughout. The structure of these skylights—called “northlights” by the architects—continue down the facade, forming a series of 25 steel-framed bays. It’s the arrangement of these bays which lifts the building beyond the mundane. 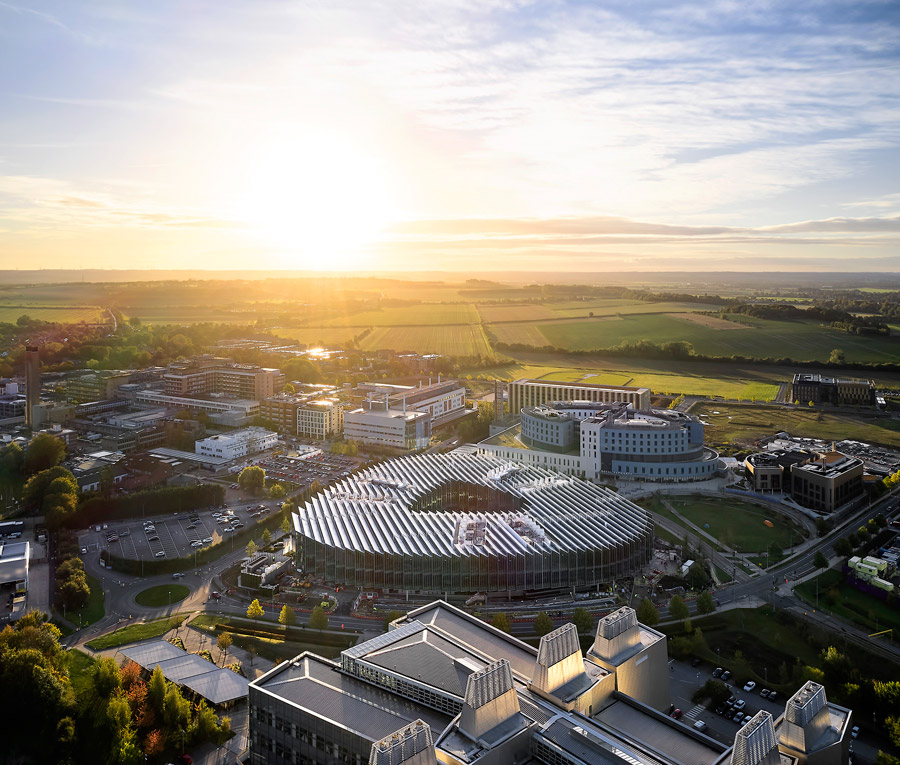 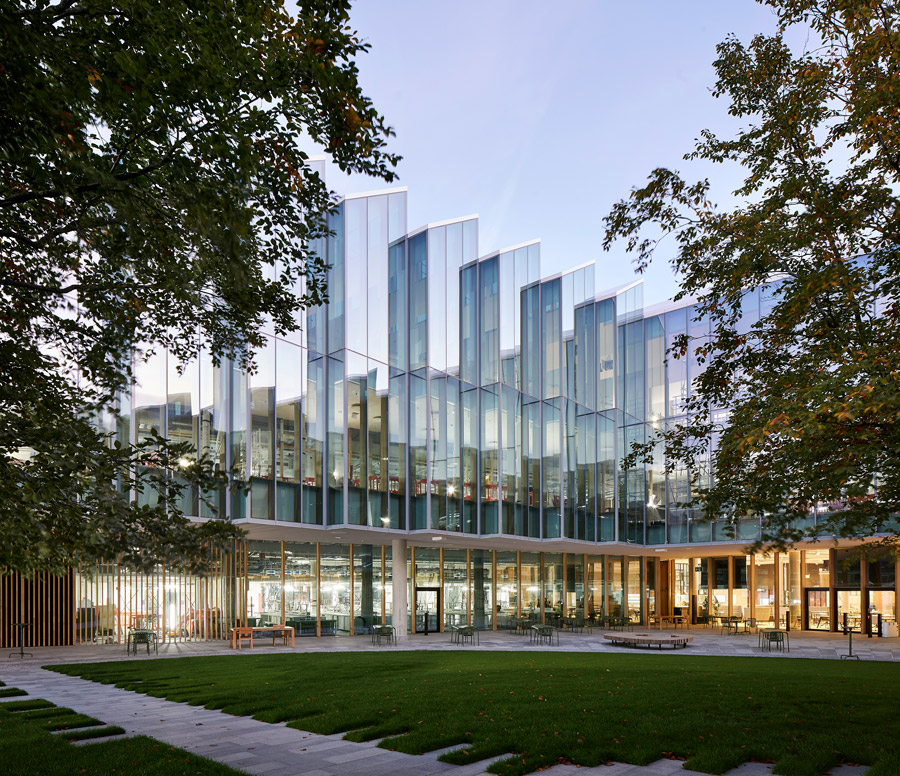 From the exterior, the crenelated facade and roofline breaks down the overall mass and makes the building look lighter, particularly compared to the adjacent Laboratory of Molecular Biology, which is a boxy colossus. It also introduces another geometry to the interior. On the street side of the building, at second and third floors, the bays create perfect spaces for administration. On the courtyard side, on the second floor, the recesses, clad in wood, are part of an internal circulation route, which transform at key points into stepped communal spaces. On the third floor, they have been used for intimate meeting rooms. 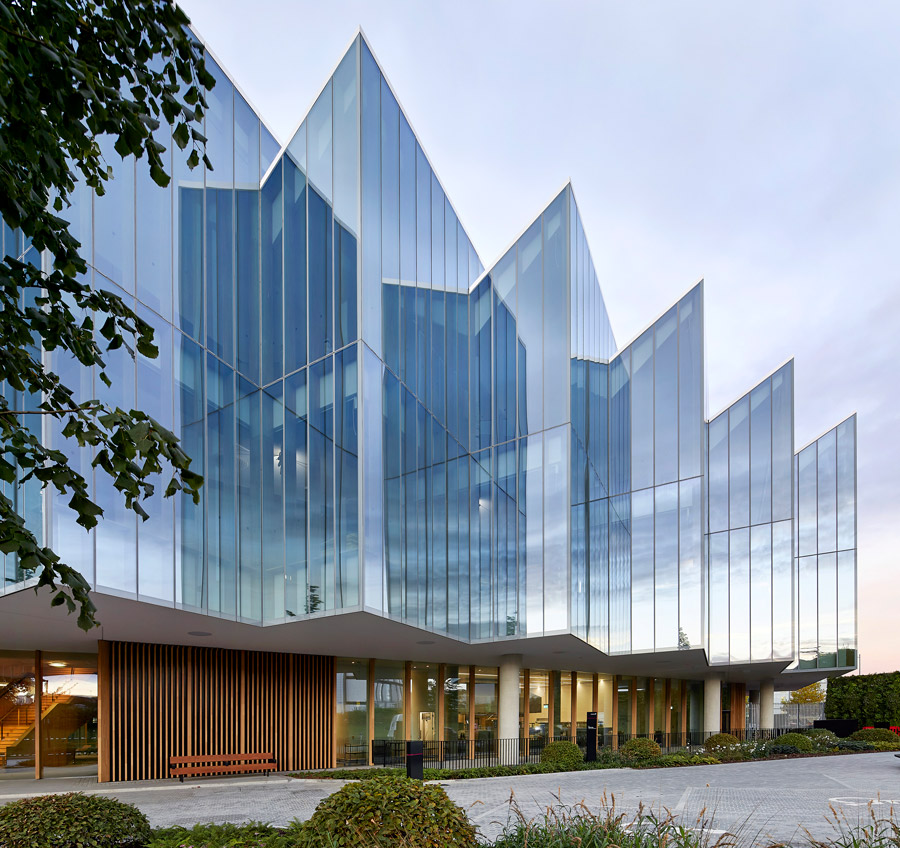 The building is thus able to perform two potentially conflicting roles. Not only is the Discovery Centre the most public building of an international company, it is also an operational lab building. To marry these roles in a building of only three stories, something had to give—that was the gargantuan amount of data storage and energy generation that such a facility needs. This has been moved into a separate building several hundred feet away, linked with the headquarters by a 45-foot-deep tunnel. Without this move, the plant would have had to sit on the roof, making the northlight strategy, and all the natural light that it feeds into the building and all the nuance it provides to the plan and section, impossible.

This decision also means that the Discovery Centre can beef up its own energy production. The ground-source heat pump system, close to the data and energy center, is immense: 174 piles that extend 650 feet deep into the ground. In fact, the data center isn’t the only subsidiary building. Adjacent to it, Herzog & de Meuron have provided a master plan for six further buildings, including a multi-story car park and what is revealingly called an “enabling building,” which will include conference facilities. 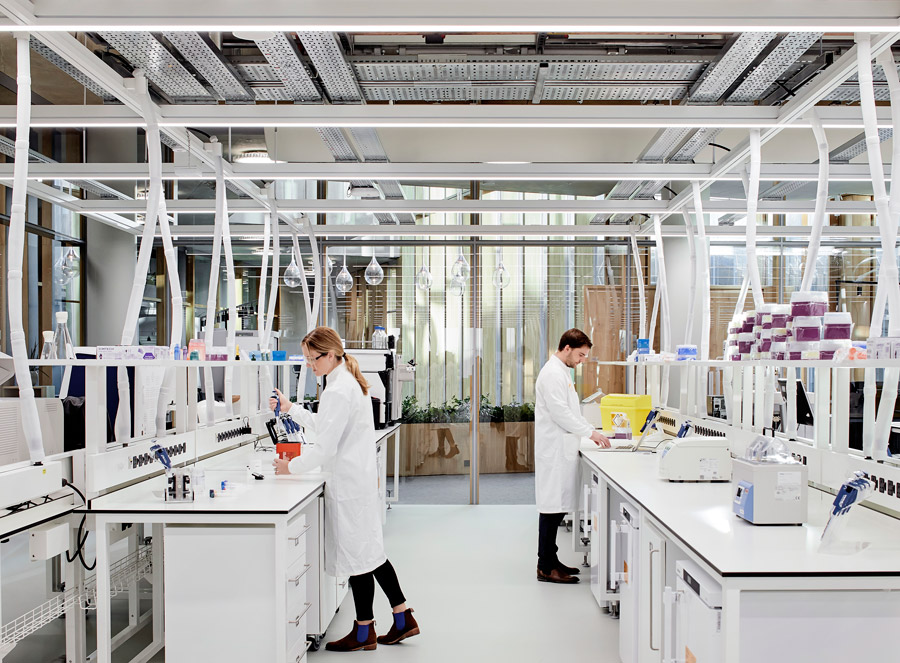 This decision allows the center to perform a potentially civic role. Research parks are not known for their public spaces. But the architects and clients clearly have an ambition to create one with the Discovery Centre, hoping it will become a social hub for what is an incredibly fertile area of research activity. Intended to be porous, it has three gated entrance ways at the corners of the triangular plan, offering access to the central circular courtyard from surrounding buildings including the Papworth Hospital and the vast complex of care and research facilities that is the Addenbrooke. Whether the gates to the three access points remain unlocked is another matter.

If AstraZeneca does keep the courtyard open, visitors will be able to see scientists working in the ground floor lab. Most of the labs though are on the second and third floors, situated inside each of six in situ poured concrete cores effectively grouped into three pairs with beautiful wide oak staircases rising between them. These labs are twice as deep as standard, but in raising services overhead and ensuring the labs have good light and are open on all sides at their perimeter, the architects have created comfortable space in which to work. 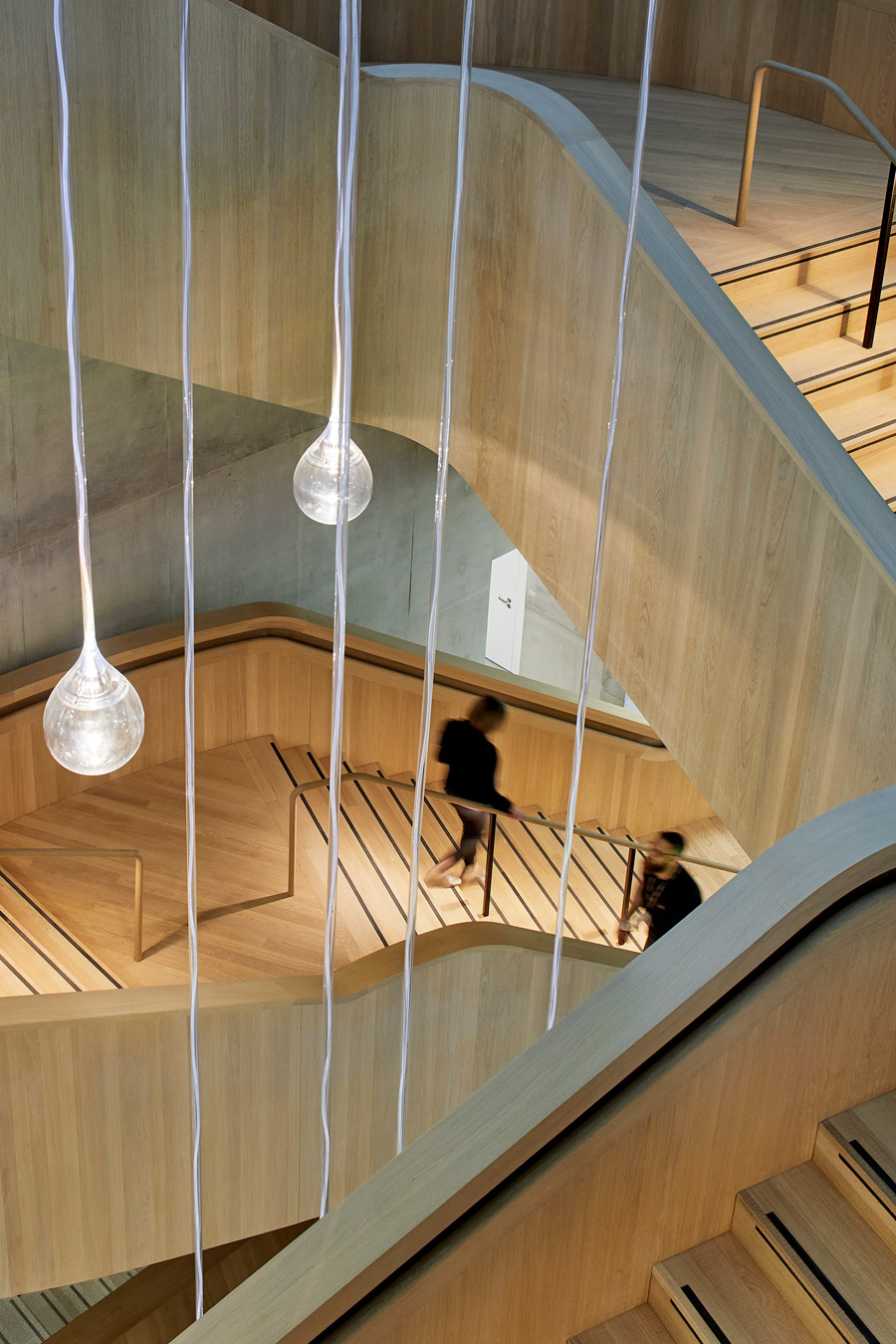 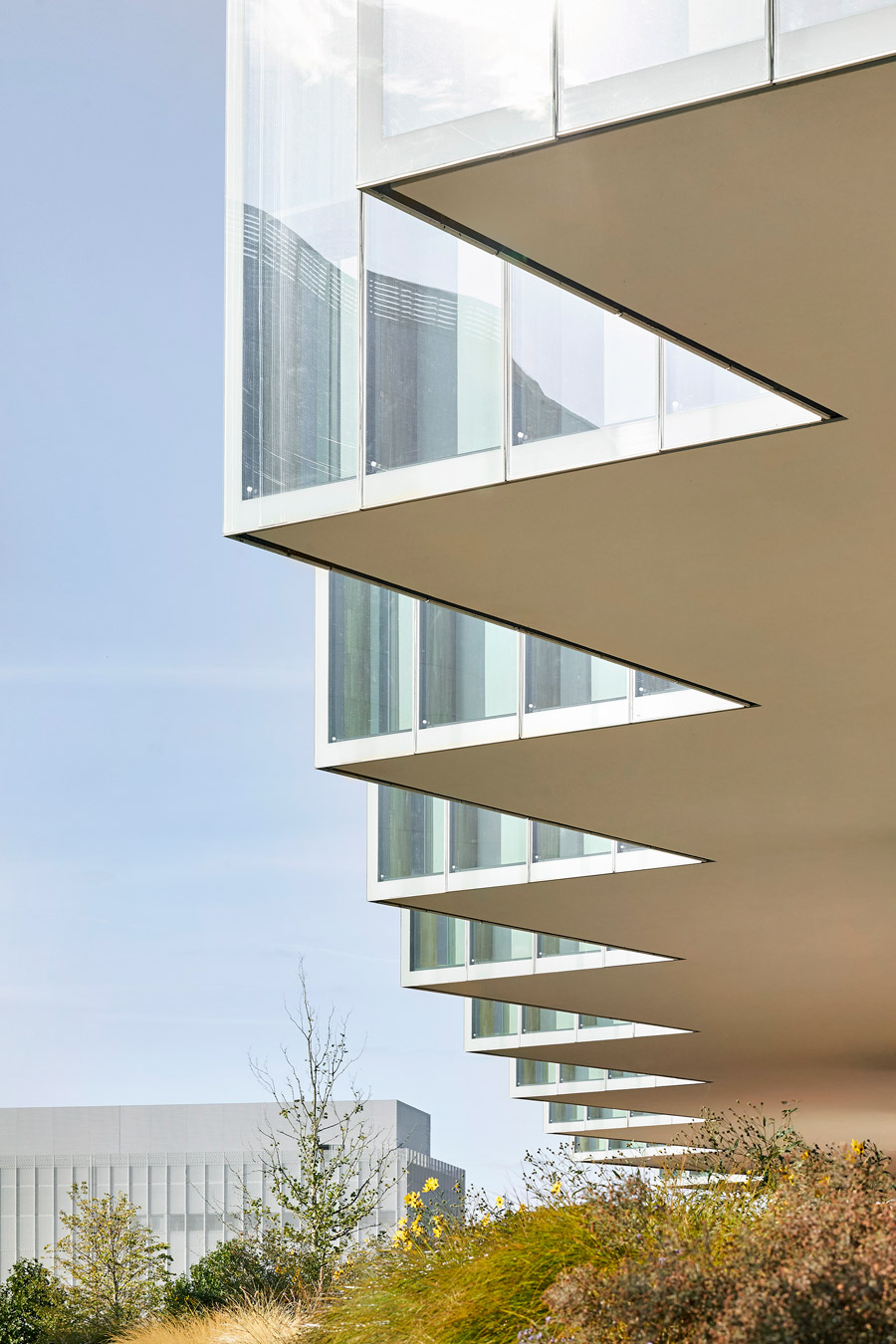 The rest of the building’s floor plan extends past the cores and is supported by columns. It is given over to social and collaborative working functions in a space that is delightfully varied and heterogenous, both vertically and horizontally. Each floor has a different character. The ground floor is dominated by the oak detailing of the restaurant and auditorium exterior; the middle floor by its inner ring of breakout spaces and the view back to the courtyard; while the upper floor is filled by the natural light from the northlights. At three points, the floor plate on the third floor is pulled back to create a visible link with the breakout spaces on the floor below. Voids in the third floor do likewise, with the added benefit of letting daylight from the northlights penetrate the lower plan. 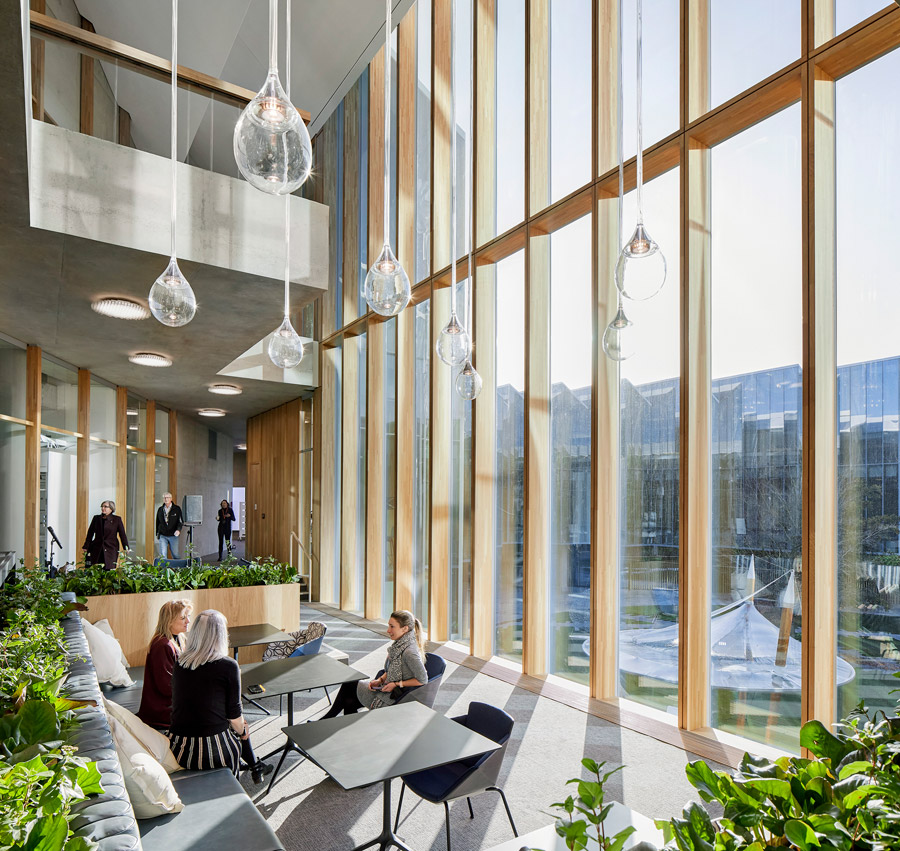 It is an exceptionally intelligent bit of architecture; allowing AstraZeneca to integrate its corporate prestige with both cutting-edge science and a social function. Rather than the secrecy of most research centers, the Discovery Centre is a more open, welcoming building. It should come as no surprise. Herzog & de Meuron may be well-known in the UK for its cultural buildings, but the firm’s hometown of Basel, Switzerland is dominated by the pharmaceutical industry—and the architects have worked, for example with Roche, for over two decades. This understanding of the technical needs of laboratories combined with Herzog & de Meuron’s capacity for combining style and functionality has produced an exemplary building for AstraZeneca.

AIA Unveils Design for a Redo of Its Washington Headquarters