After a pause of over 18 months, construction resumed late last year on 1000M, a residential tower in Chicago’s South Loop that is one of the final buildings designed by Helmut Jahn before his death last May. The 73-story project, located on South Michigan Avenue, initially broke ground in late 2019 but construction halted in the early months of the pandemic over public health concerns. Soon after, financing from Goldman Sachs fell through.

Jahn, who was killed in a bike accident last spring at age 81, was born in Germany but made his home and reputation in Chicago. He completed over a dozen projects throughout the city during his lifetime, among them the United Airlines terminal at O’Hare Airport (1987), the Mansueto Library at the University of Chicago (2011), and the locally infamous but globally acclaimed James R. Thompson Center state office building (1985). Planned to rise 805 feet, 1000M will be Jahn’s tallest building in Chicago and the third tallest in his global portfolio.

Jahn began work on the tower’s design in 2015, along with JAHN Executive Vice President Phillip Castillo, who is now leading the project. Developed by Time Equities Inc., 1000M made news at the time as the city’s largest condominium development in a decade. Castillo told RECORD that the design emerged from a series of meetings he and Jahn had with Time Equities CEO Francis Greenburger. “I had been with Helmut for a really long time—almost 40 years,” he says. “We had a certain dialogue on how to approach a building.” In Greenburger, Castillo says, the duo found “an enlightened client who actually believes in the architecture.”

1000M’s location within the Historic Michigan Boulevard District imposed restrictions on the tower’s design, affecting the street wall and overall height. The base of the tower slopes out over an adjacent building (also owned by Time Equities), before reaching a sharp “cut” in the façade where, Castillo says, “the building goes from a hard-edge street wall to this softer tower.” The street-facing side of the tower, overlooking Grant Park, features curved corners that gesture to the landscape. The crisp edges on the building’s northeast side, by contrast, speak to the rest of the city. “The volume transforms into a parallelogram,” says Castillo. “You get this tilted facade on the north and south sides, with a strong diagonal. That’s how the geometry resolves itself.”

In July 2020, three months after construction was initially paused, the Chicago Tribune reported that lender Goldman Sachs had withdrawn funding for the $470 million project, out of concerns about pandemic-era demand for downtown residences. While construction stalled, Time Equities, along with co-developers JK Equities and Oak Capitals, decided to rework the project as an apartment tower rather than a condominium. Adjusting unit sizes and amenities for the rental market meant increasing the total number of residences from 500 to 738 and creating more small units, such as studios. The shift to a rental model also required that 10 percent of 1000M’s total units must be affordable. In December 2021, the developers announced that a $304.5 million construction loan from Goldman Sachs and Deutsche Bank had restarted the project, and that it would be completed within 36 months.

Although the tangle of concerns, financial and otherwise, raised by the pandemic upended the project’s timeline, Castillo tells RECORD that the delay was beneficial. “Sometimes the passage of time allows you to take a second look. In architecture, especially in commercial architecture, you don’t often have that chance—time is one of those things that you’re always combatting,” he says. “The fact that we had the time to step back and work with our client made the building better.” 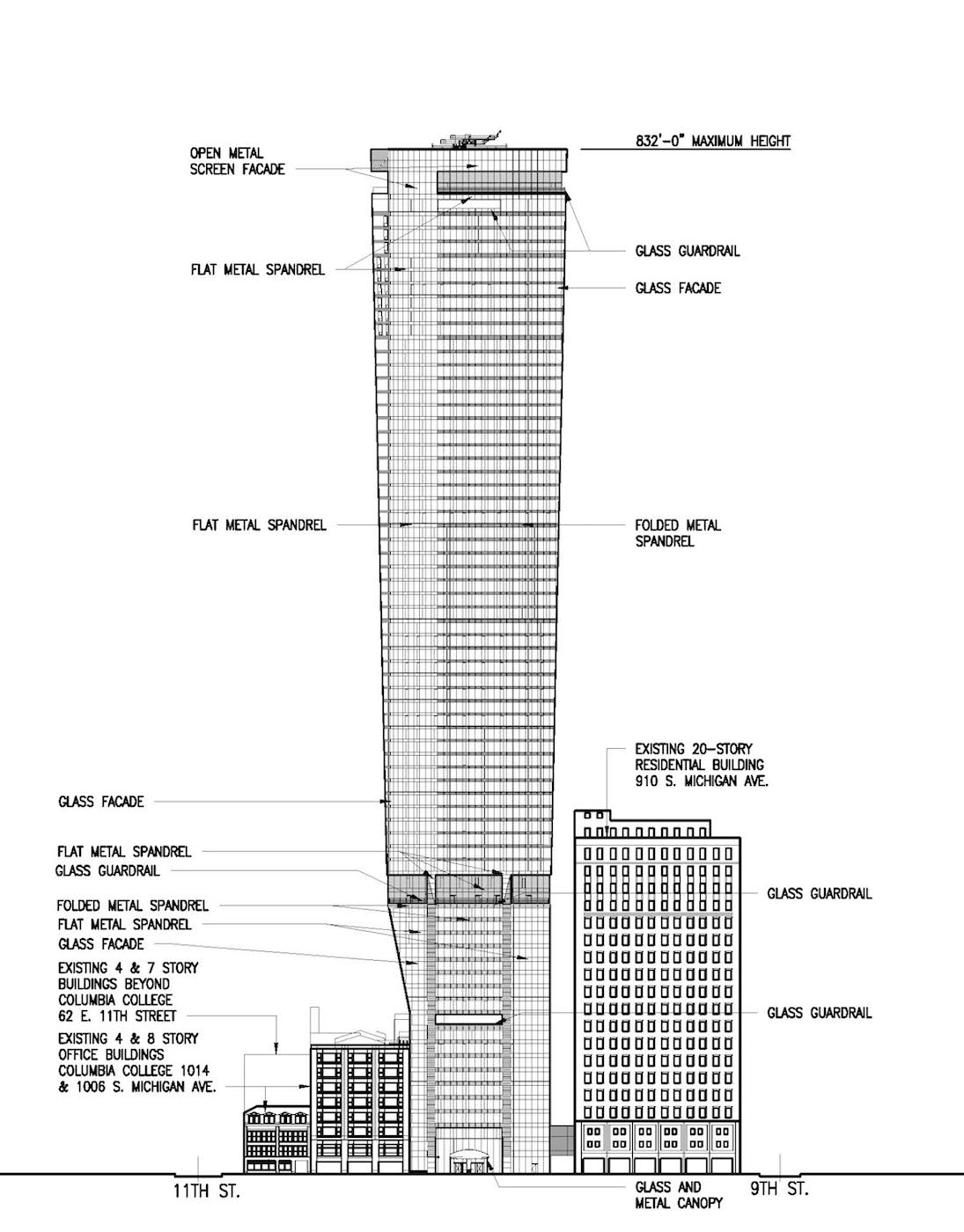 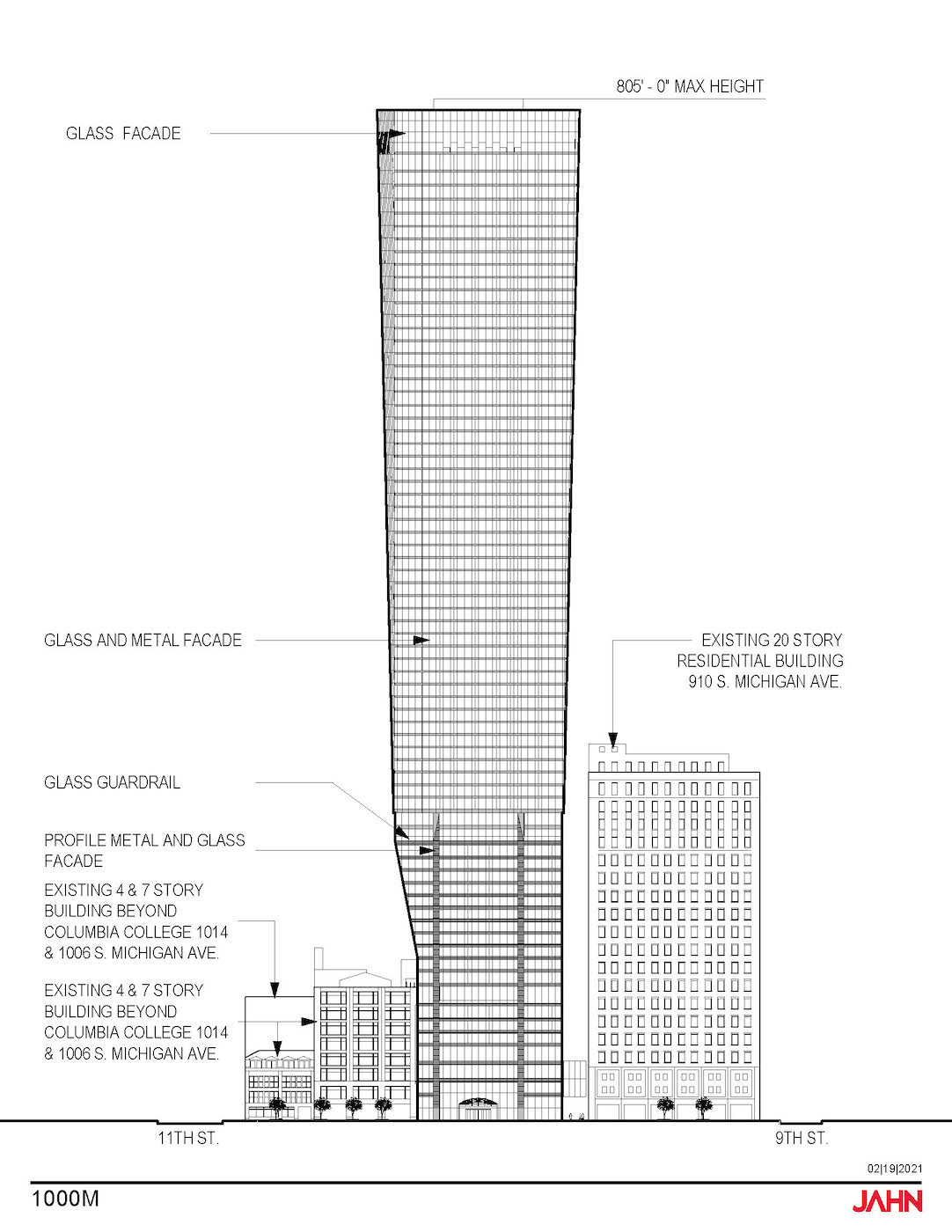 According to Castillo, many of the changes made were in the building’s interiors, which are being overseen by Chicago-based design firm KARA MANN, to accommodate the increase in units. But some alterations were made to the building’s facade and the tower’s height was reduced from 832 to 805 feet. Profiled aluminum paneling was originally planned for the entire exterior but is now only featured on the Michigan Avenue façade to relate to the historic context of the avenue. Castillo and Jahn also decided to enclose the tower’s top, doing away with previously imagined perforated screening. “The building didn’t actually change,” says Castillo. “We massaged the envelope to get this done within the same context of the design that Helmut wanted to do.”

As for 1000M’s place in Jahn’s legacy, Castillo says: “If you took an image of every building [of Jahn’s] from 1974 onwards and lined them up in one photograph, there is a story. This was just the next step for him, and there would have been another one.” 1000M may be one of the last chapters in Jahn’s biography, he noted, “but it is not the final chapter in this firm.”