Although unmaintained and strewn with trash, the sloping, rocky Bronx site for a new YMCA was blessed with 100-year-old trees and a rugged beauty waiting to be rediscovered. Part of a property occupied by the Christopher School, a New York City-run institution for children with special needs, it sat across the street from Cardinal Spellman High School and near the Baychester and Edenwald public-housing projects that encompass a total of 51 buildings, with nearly 2,500 low-income apartments. “The first thing we did was survey the trees and figure out which ones we should save and which we might move,” says Lissa So, a partner at Marvel, the architecture firm that designed the Northeast Bronx YMCA completed last September.

The firm met with members of a local citizens group that had been fighting for a community center for years. The group wanted a new recreational facility with spaces for wellness and learning. Throughout the design process, the architects had to juggle the perspectives of various stakeholders—the YMCA; the surrounding underserved community; the city, which owned the land; and the Christopher School, which would lose some of its campus. Most Y’s in New York are in aging buildings or in larger projects built by developers, who include them to meet requirements for community facilities. A rare ground-up project, the Northeast Bronx Y could respond to the needs of different groups. “We wanted to make a statement,” says Joe Chan, senior vice president of real estate and property management for the YMCA of Greater New York. “It’s not often that three acres of land becomes available in New York.” 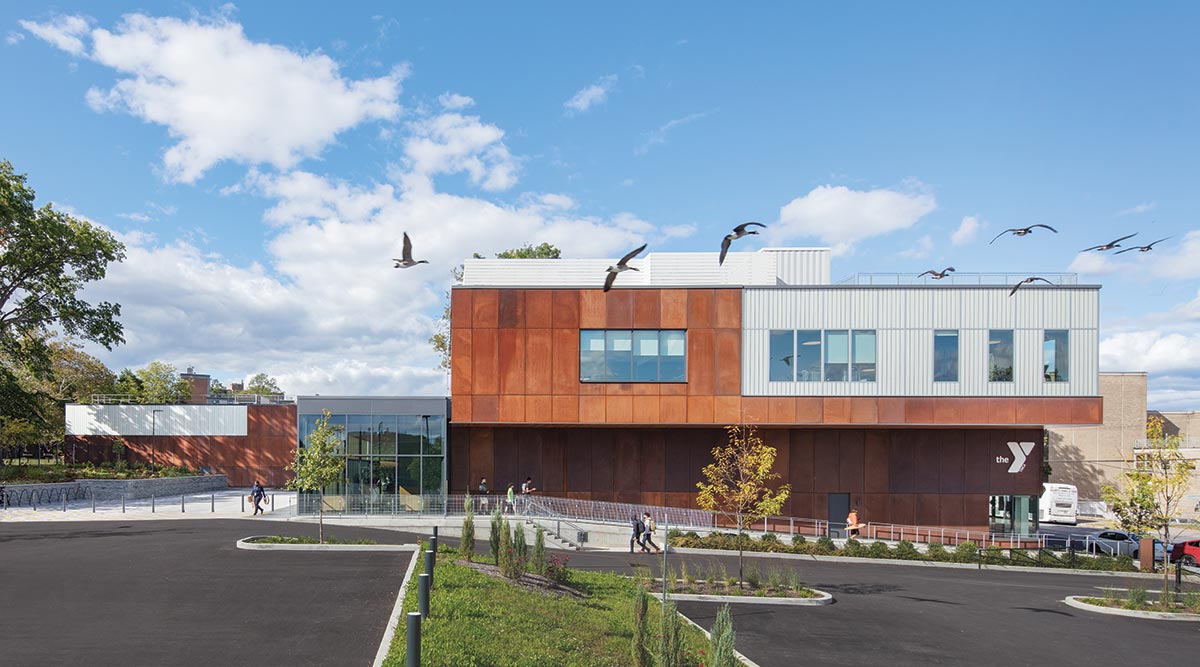 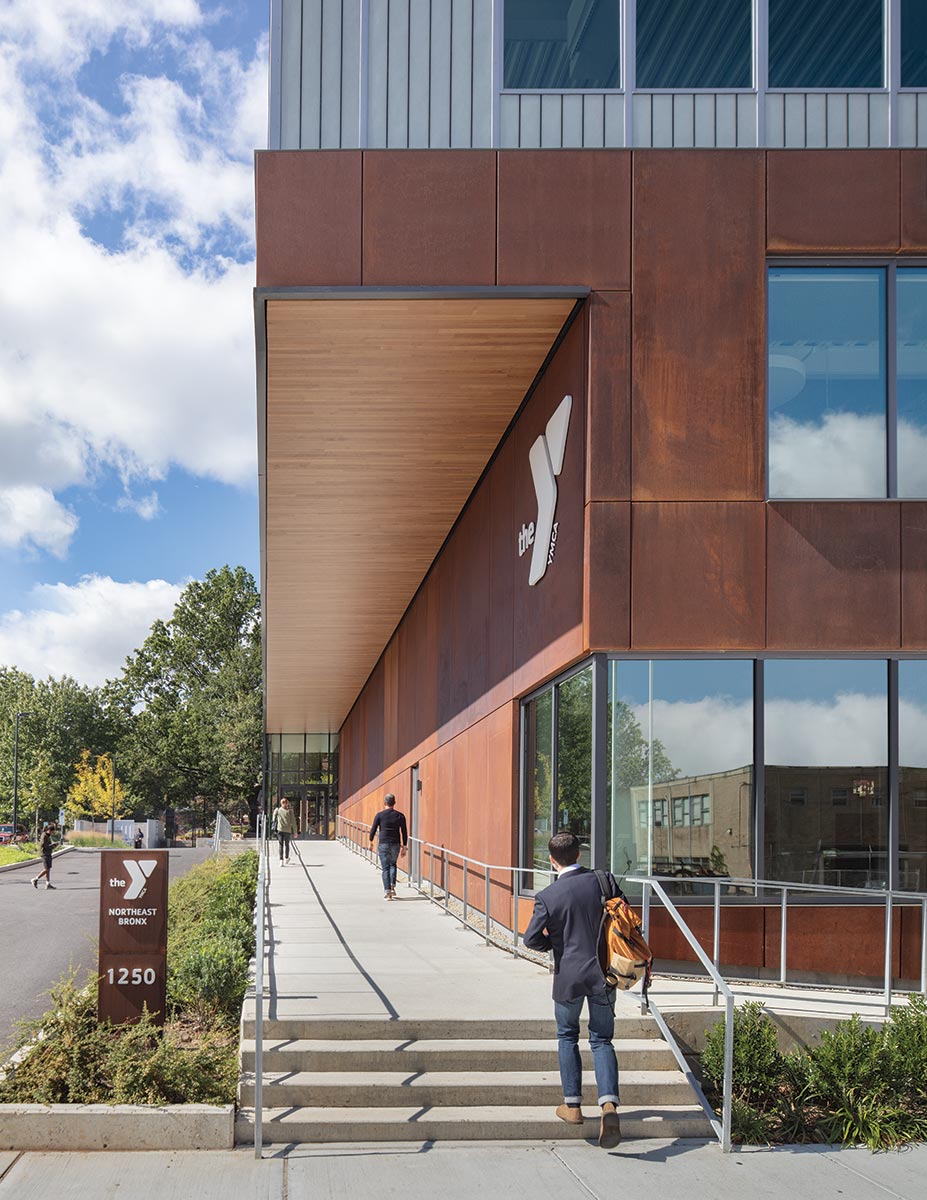 To make a new access for the Christopher School, Marvel created a gatehouse for it on Schieffelin Place to the north and used the existing driveway on the east for the Y. Since part of the new surface parking for the Y occupies the former basketball courts for the school, the Y rebuilt the courts on the other side of the line now dividing the property.

Taking advantage of the three-acre site, Marvel designed the 52,100-square-foot complex as a trio of “pavilions” nestled within the landscape, and arranged to preserve as many of the old trees as possible. (Two of the firm’s five partners are landscape architects.) Founder Jonathan Marvel was born and raised in Puerto Rico, where his father, Thomas, was an architect who often integrated inside and out. “Landscape is an essential part of our architecture,” he says.

The architects set the aquatics pavilion on the lower portion of the sloping site on the north, so they could reduce the need for excavation, and put the gym on a higher elevation on the south, since it didn’t require much cutting and filling. On the east, the three-story community center serves as a hinge between the parking on one side and a landscaped courtyard between the three pavilions. A glazed corridor connects all three structures, taking visitors from the entry lobby to a lounge looking into the aquatics center. The four volumes slip into one another like pieces in a puzzle. 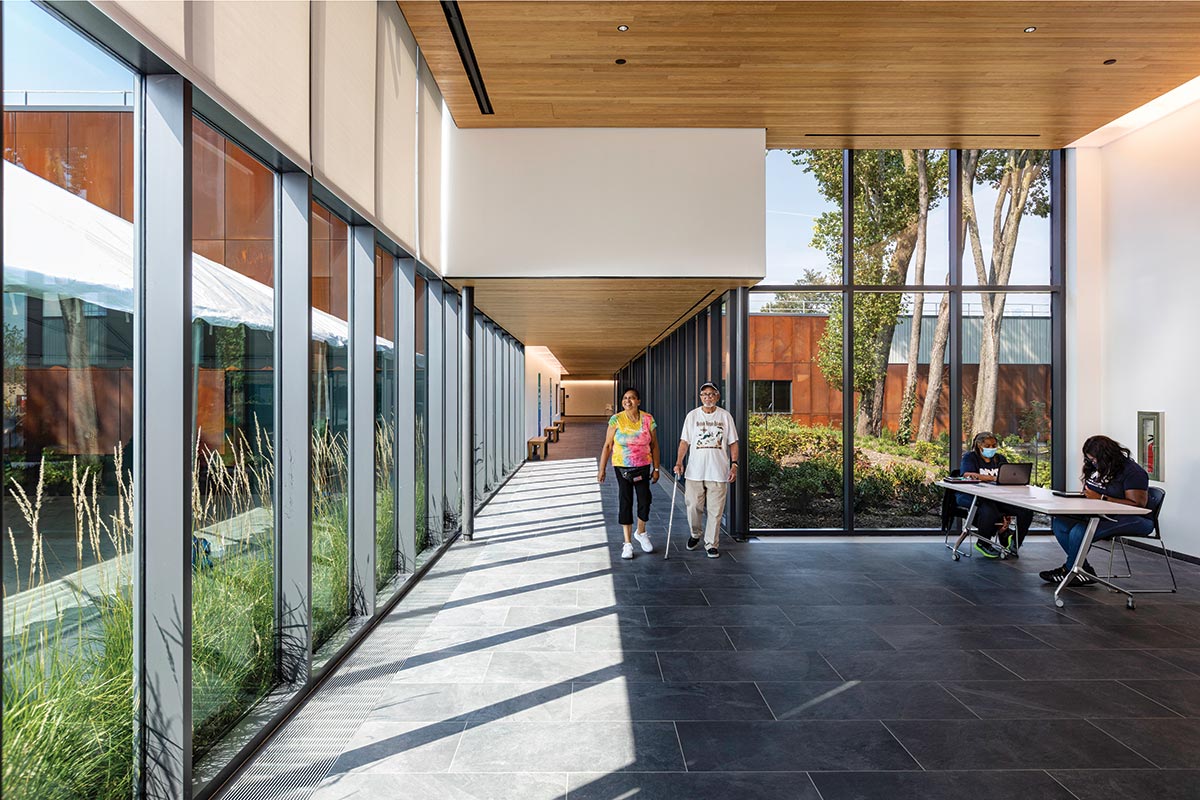 The entry lobby and corridor (above) were designed as volumes slipping into one another and connected to the landscape outside. Photo © Joshua Simpson

Throughout the building, views to the landscape animate indoor spaces—helping visitors navigate the facility, while surrounding them with nature. Whether walking along the corridor, swimming in the pools, or taking classes in the learning kitchen in the community center, you can easily forget that you’re in a densely populated part of New York. Asked what he liked about the Y, Walchsin Valle, one of the lifeguards, swept his arm toward the pool and the carefully framed view of the courtyard and said, “It doesn’t’ feel like an actual building.” Hearing this, Marvel, So, and Yadiel Rivera-Díaz, the partner in charge of the project’s landscape design, smiled broadly. 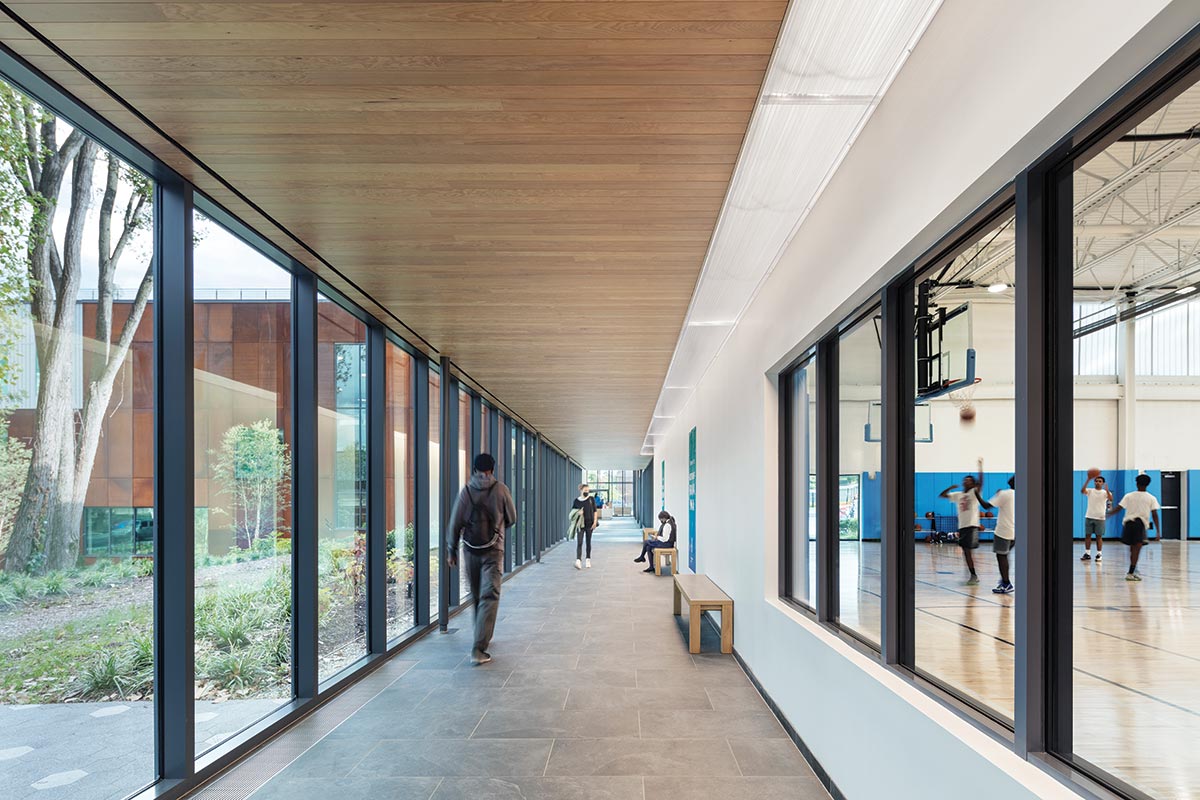 The corridor offers views to both the courtyard and the gym. Photo © Scott Frances

Each of the three pavilions is a steel-frame structure, though the aquatics center also has laminated timbers spanning over the pools. Translucent Kalwall panels bring soft daylight into the pool, the gym, and exercise spaces in the community center while maintaining privacy. On the exterior, the architects specified weathering-steel panels, overcoming the client’s initial resistance to what seemed like an industrial material by explaining how the warm reddish hue would complement the trees outside. “It’s an organic material that changes over time, just like the landscape,” says Marvel. Inside, the designers used southern yellow pine for ceilings over the pool, hemlock on ceilings in the lobby and above the entry ramp, and ceramic floor tiles that look like slate, but are less slippery, in the corridor. For interior surfaces, they used a subtle palette of colors—white, gray, taupe, and beige—to focus attention on what’s happening outdoors. 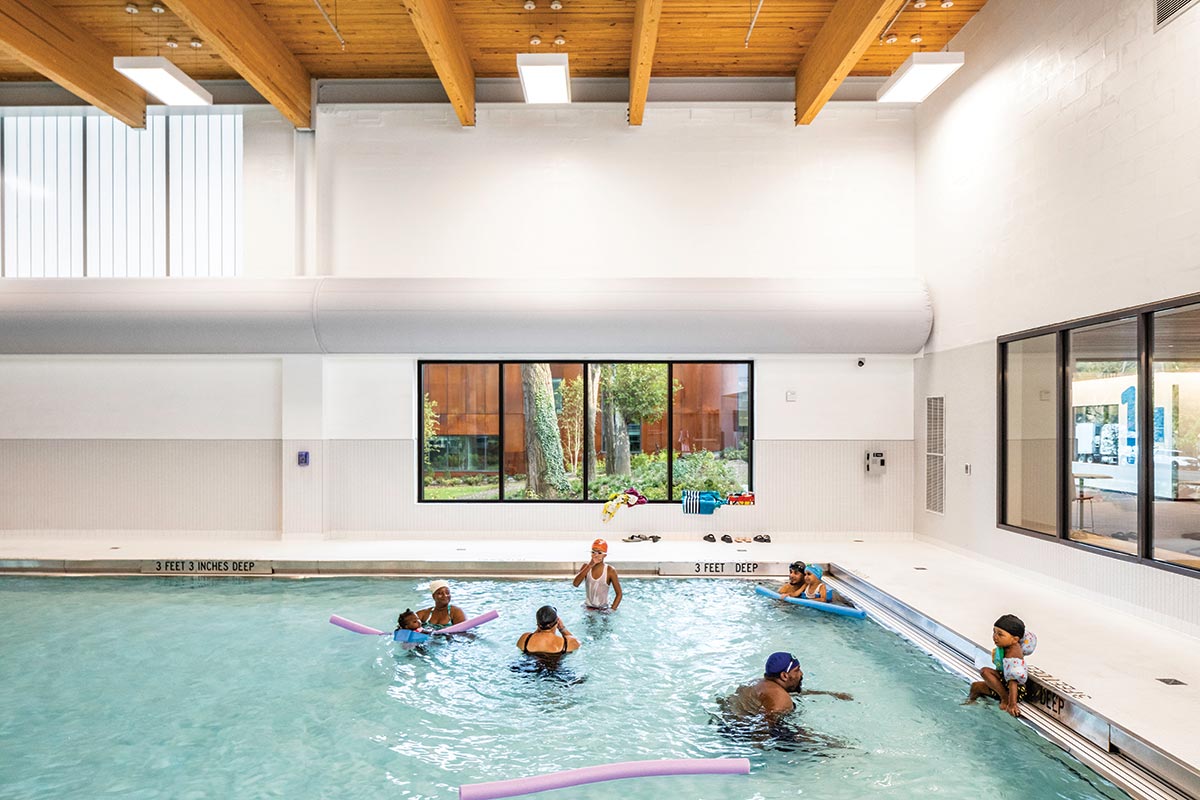 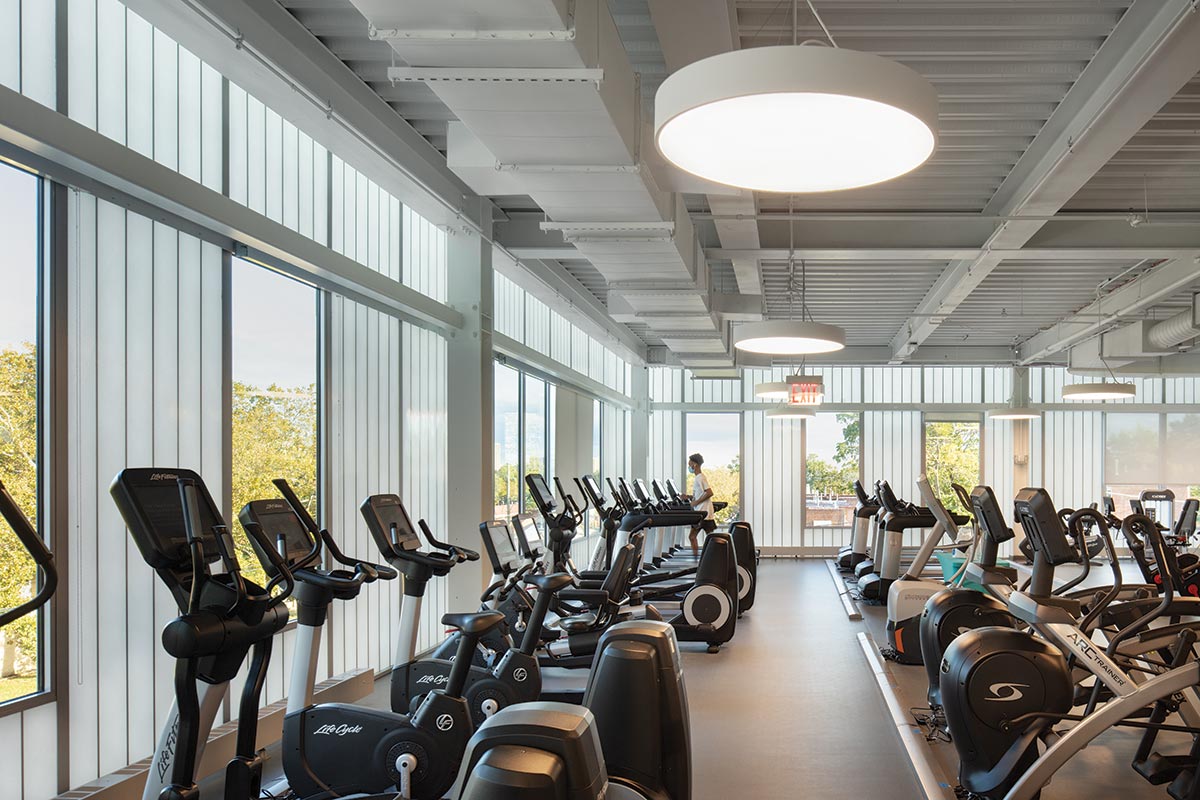 Swimmers can look into the courtyard from the pool (3), while exercise rooms enjoy daylight from windows and translucent glazing (4). Photos © Joshua Simpson (3), Scott Frances (4)

The Y serves an intergenerational community. Parents can take classes on healthy cooking in the teaching kitchen as their kids swim in the pool and seniors tend vegetables growing in rows of planters on the roof terrace of the community center.

With a high-performance thermal envelope and a highly efficient mechanical system adjusted to the different needs of its three pavilions, the project is targeted to achieve LEED Gold. It also has a cogeneration plant that produces about 55 percent of the building’s electrical need and recycles waste heat to warm the water in the swimming pools.

A public-private partnership, the Northeast Bronx YMCA had a total budget of $60 million, funded in part with $24 million from the state and $12 million from the city. It drew strong support from Carl Heastie, speaker of the New York State Assembly, who represents the Northeast Bronx in that body and reportedly works out at the Y on a regular basis. Shortly after it opened in the fall, Vice President Kamala Harris came to tour it. Even before it was completed, its gym served as a vaccination site in early 2021, showing how such facilities help support the health and well-being of the community at large.

Since its founding in London in 1844 as the Young Men’s Christian Association, the organization has tended to build imposing structures as civic landmarks, with gyms and pools inserted inside. The Northeast Bronx YMCA breaks free of this model, making the architecture disappear so nature can play the leading role—a feat all the more remarkable for its location in a neighborhood known for urban grit, not leafy retreats. 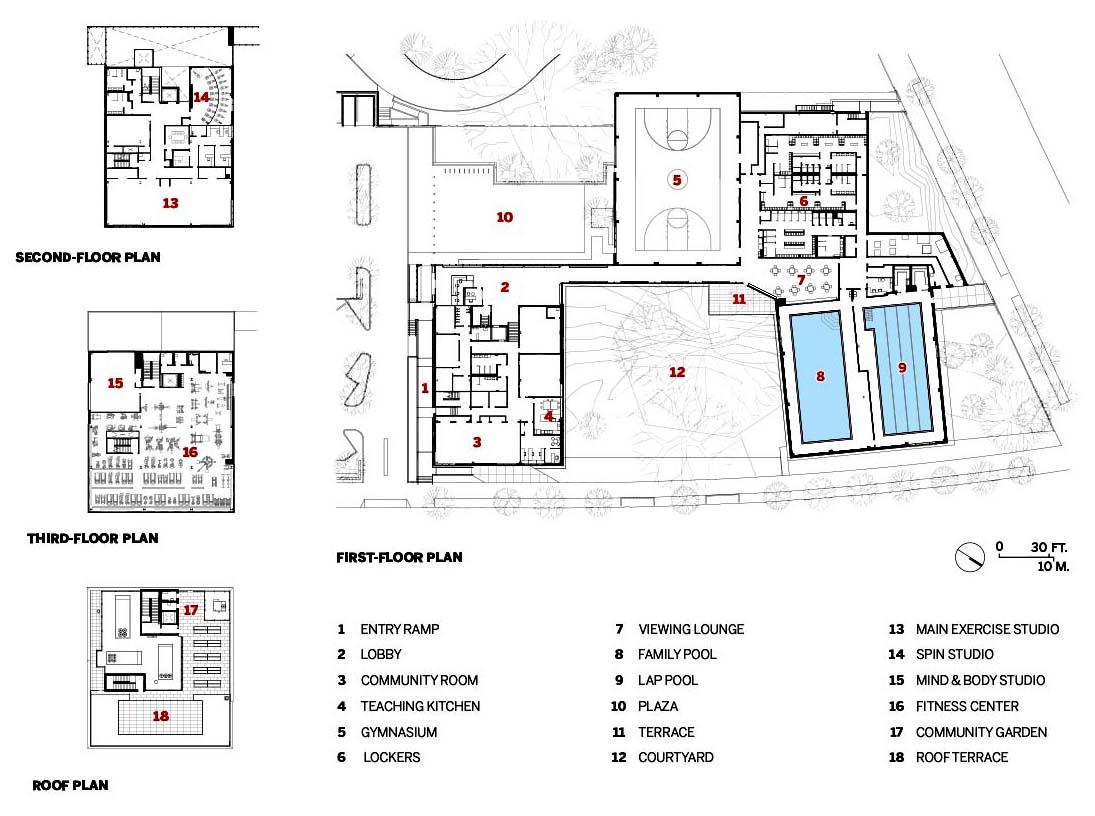