Review: "Building in China: A Century of Dialogues on Modern Architecture,” at the University of Pennsylvania’s Fisher Fine Arts Library, Philadelphia

With relations between the United States and China strained by trade and political competition, Covid-19, and Russia’s invasion of Ukraine, now is a good moment to look back at some of the ties that bind the two countries together. In terms of architectural education, those ties began with a group of Chinese students coming to America in the 1920s, many of whom studied at the University of Pennsylvania on Boxer Indemnity Scholarships funded by excess payments China made to the U.S. after the Boxer Rebellion in 1900. From 1918 to 1941, 23 Chinese students matriculated at Penn, drawn in part by the school’s dean, Paul Philippe Cret, who built a reputation as a master of Beaux-Arts architecture and pedagogy.

At Penn, many of these students excelled, including Liang Sicheng, who earned the gold medal in 1927 for excellence in architectural design, beating out a fellow student named Louis Kahn, who had to settle for bronze. “These were the best and the brightest from China,” says William Whitaker, the curator and collections manager of the Architectural Archives at Penn. When they returned to China, they established important practices and schools of architecture that shaped the nation’s rapidly developing cities and towns for decades. As China explored a new path of modernism, these architects led the way—informed by their education in the U.S. and their understanding of Chinese design principles.

Building in China: A Century of Dialogues on Modern Architecture, an exhibition on view at Penn’s Frank Furness-designed Fisher Fine Arts Library through April 22, tells the story of Chinese modernism in two parts: one examining the careers of the 23 Penn graduates and the other focusing on work by Yung Ho Chang and Wang Shu, contemporary architects who continue the struggle to balance modernism and Chinese characteristics, though neither studied at Penn. The first section is ensconced in the basement space of the school’s Architectural Archives, while the second occupies a gallery upstairs near the library’s entrance. The twinned parts serve as bookends to a century of dialogues about East and West, and about modernism and traditionalism.

The idea of the show began after a 2003 exhibition and conference at Penn on the Beaux Arts in China, says Whitaker. “We started to make connections between students who studied at Penn and the development of architecture in China,” says Whitaker, “but needed to do a lot more research.”

“It was exciting to see what those students built, what they did when they got back to China,” says Zhongjie Lin, an associate professor of city and regional planning at Penn’s Weitzman School of Design who curated the exhibition along with Ming Tong of Southeast University School of Architecture in Nanjing and Xiangning Li of Tongji University in Shanghai. Doing research for the exhibition and piecing together the careers of some of the key students was challenging, since many of their buildings have been torn down and much of the documentation was destroyed during the Cultural Revolution in the 1960s and ‘70s. 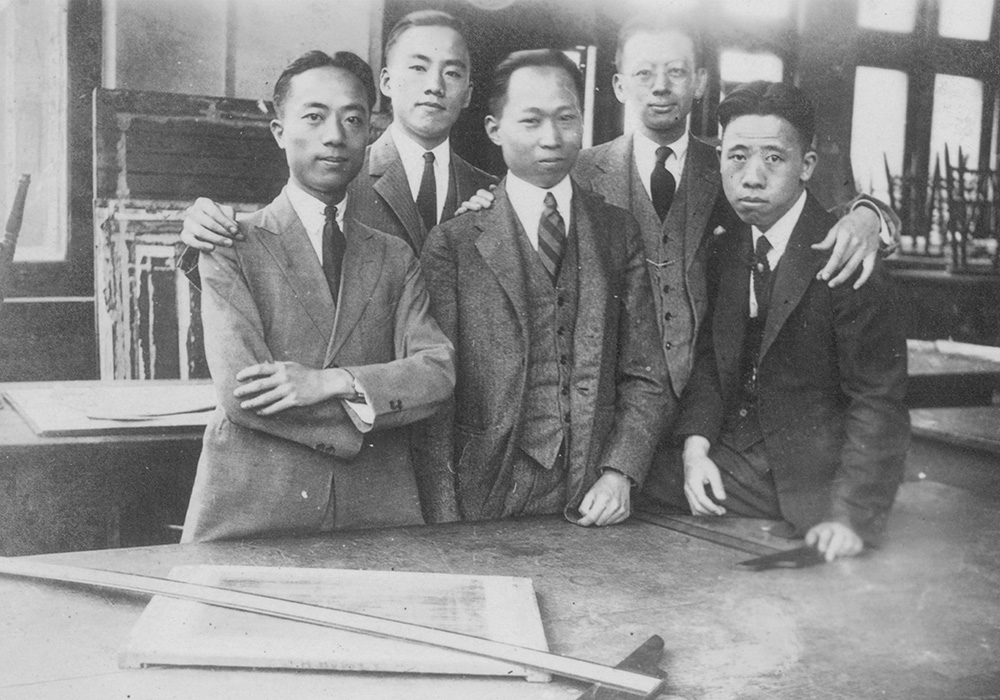 Liang and his wife Lin Huiyin, who also studied at Penn (and was Maya Lin’s aunt), became the most prominent of the so-called “First Generation” of modern Chinese architects. The couple traveled throughout China in the 1930s documenting ancient temples and advocating for their preservation. Later they designed the Monument to the People’s Heroes, an obelisk that still stands in Tiananmen Square. In 1949, Liang developed a plan for Beijing that would have preserved its impressive city walls, watchtowers, and hutong neighborhoods while accommodating new construction outside the historic core. He also served as China’s representative on the team of architects who designed the United Nations Headquarters in New York.

The first part of the exhibition offers quick biographical information on each of the 23 Chinese students at Penn, photographs of them in Philadelphia, and reproductions of some of their work at the school. It then presents a series of projects they built when they returned to China, using drawings, models created for this exhibition, and photographs. “The work shows a spectrum of approaches and an evolution of styles” from neo-classical to modern, says Lin. It also ranges in building type, from houses and apartment buildings to railroad stations and educational facilities.

Upstairs in the Fine Arts Library, the exhibition looks at six recent projects, three by Yung Ho Chang’s Beijing-based firm Atelier FCJZ and three by Wang Shu’s Hangzhou-based firm Amateur Architecture Studio. While both architects work with their wives (Chang with Lu Lijia and Wang with Lu Wenyu), the focus here is on the two men—an omission most evident in video interviews with just the guys. The projects raise critical issues facing architects in China today—from integrating new construction within the fabric of existing communities (as seen in Chang’s Jishou Art Museum in Hunan Province and Wang’s Wencun Village in Zhejiang Province) to finding new approaches to higher education (Chang’s new Liangzhu campus for the China Academy of Art and Wang’s Wa Shan Guesthouse on the Xiangshan campus of the same school). The other two projects—Chang’s Studio Houses at the Dongqian Education Forum on the outskirts of Ningbo and Wang’s Ningbo History Museum—are powerful expressions of a new formalism, the first based on a series of geometric exercises and the second marrying monumental scale with the fine grain of recycled materials like brick and tile. 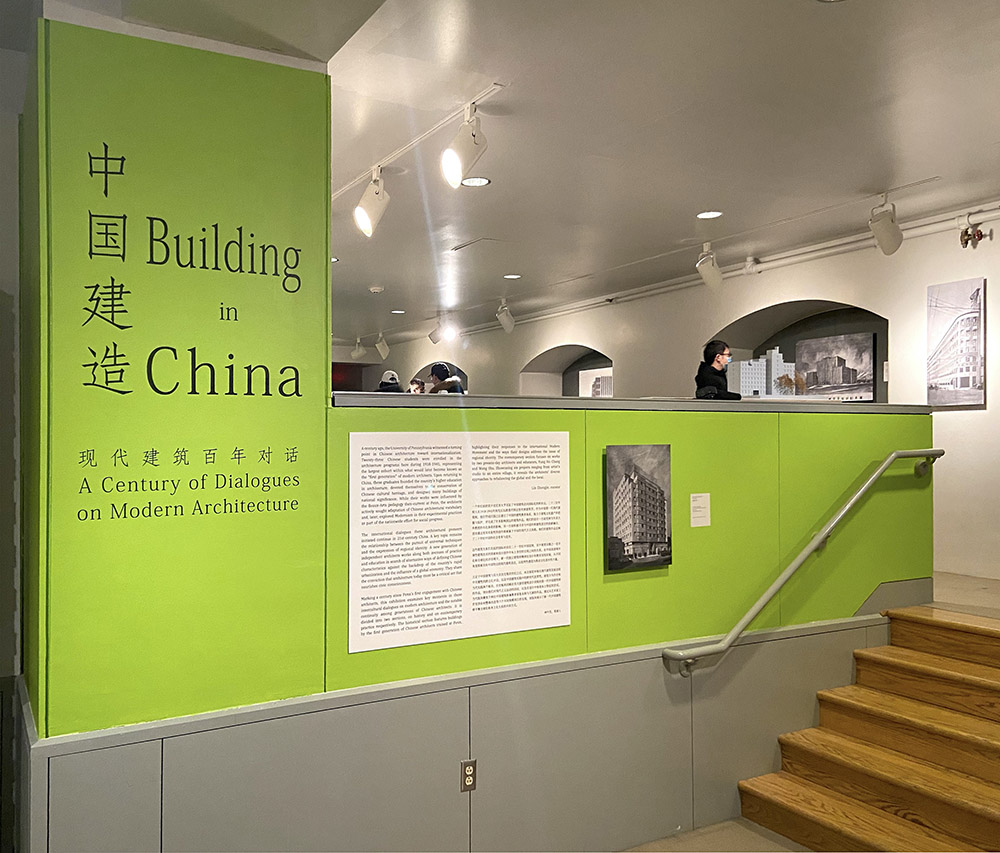 The history section of the exhibition. Photo by Ariel Genadt

The exhibition design by Ariel Genadt, who teaches at Penn and is another curator of the show, accommodates the small spaces (about 1,400 square feet in the archives and 1,200 square feet in the library) by employing simple moves—such as contrasting a few electric-green walls with gray ones and displaying text and images on freestanding, V-shaped screens upstairs, where nothing is allowed to touch the fabric of the Furness building.

Although the show’s two parts seem at first to be separate exhibitions, the gap between them is analogous to China’s leap from the difficult decades of the first half of the 20th century to the ambitious years of the 21st. As a whole, the endeavor serves as a welcome attempt to bridge two eras and the growing divide between the U.S. and China.