Northern California’s wine-country fires, a series of conflagrations that swept the region in October 2017, were historic in the breadth of their destruction; of the Sonoma hillside structures that survived, few escaped serious damage. One building left unscathed was a board-formed concrete three-unit guesthouse, designed by Casper Mork-Ulnes and completed shortly before the wildfires as a striking adjunct to an unremarkable kit home that had come with the 18-acre property overlooking the valley. When flames severely compromised the main house but bypassed the angular guest quarters just downslope, the owners, choosing to stay and rebuild, had their primary material (concrete) and their architect (Mork-Ulnes) decided for them.

Mork-Ulnes Architects, a 2015 Record Design Vanguard firm, has offices in San Francisco and Oslo. The relatively young practice’s residential portfolio is distinguished by a project-by-project inventiveness within the Scandinavian ideal of spartan restraint, as evidenced by the compositionally dynamic Mylla Hytte in Oslo. “As a Norwegian,” says Mork-Ulnes of his bicultural influences, “I’m strongly aware of the psychological impact of light and air in architecture. California Midcentury Modernism, particularly, incorporates those elements in a way that is both instructive and fundamental to me.”

His brief for the charred Sonoma site was an armored though open building with a casual indoor-outdoor focus—a durable weekend retreat for a couple with three children. The 4,000-square-foot house is a simple rectangular box extended at the upper level, on three sides, by deep overhangs that create a wraparound loggia below. A framework of board-formed reinforced-concrete columns and beams, with concrete-block shear walls clad in a sacrificial layer of graying Western red cedar, comports with the area’s prevalent rusticity. The barn vernacular is, in fact, a mainstay of Mork-Ulnes’s work on both continents—“though it has to be self-aware and regionally flexible,” he says. And to count as architecture. Where agrarian buildings traditionally expose the structure on the interior, here it is revealed on the exterior, telegraphing the organization of the spaces inside.

Based on a three-dimensional grid and composed of modules of varying widths, the two-story concrete frame is a study in rationalism. Mork-Ulnes’s office drew references from a range of sources (Sol LeWitt sculptures, for one) when crafting early conceptual models, but in the end the module sizes are a corollary of programming. The alternating wood and tempered-glass infill walls emphasize the structure, and establish a rhythm to the whole, as they display the character of the rooms—introverted or extroverted, public or private. Correspondingly, the loggia’s different depths are based on their use—addressing major solar loads, providing a sheltered space for outdoor dining. “Function driving form gives the house its expression,” says Mork-Ulnes. There is no loggia on the glazed north facade, and the south facade is entirely opaque. 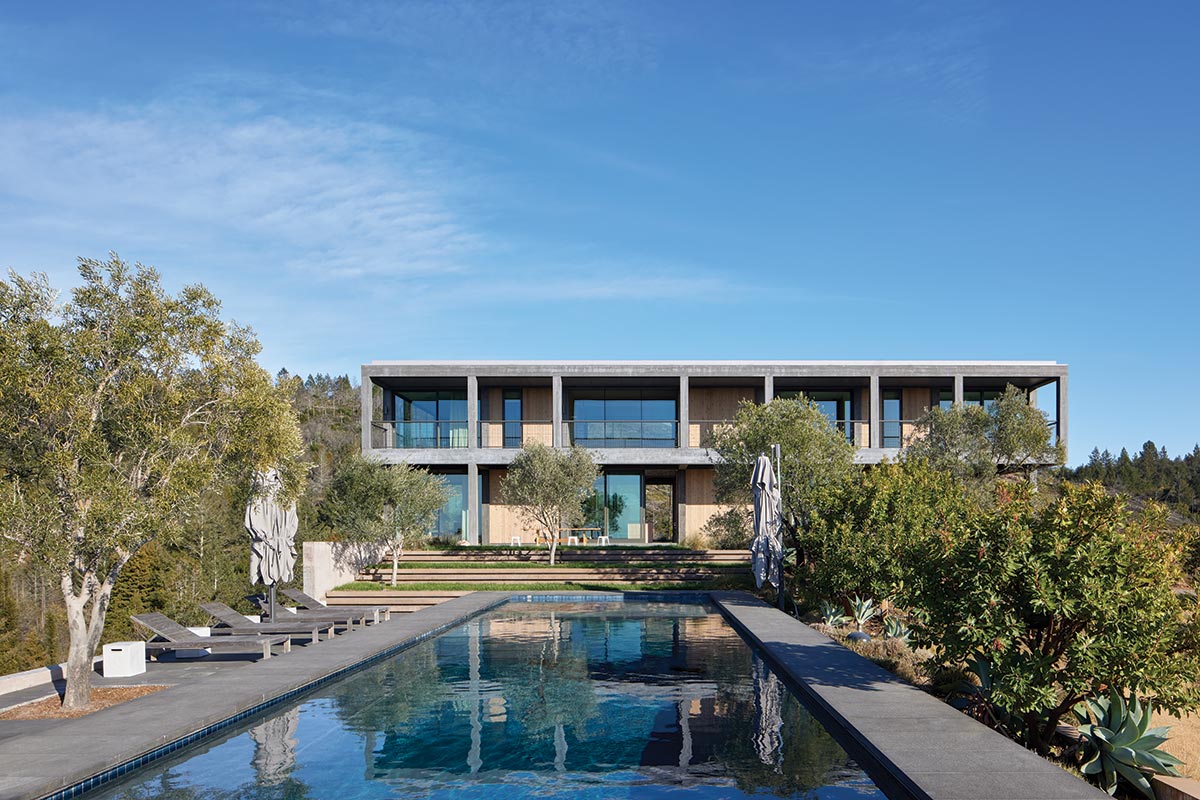 The residence was conceived as a three-dimensional grid in concrete. Photo © Bruce Damonte, click to enlarge.

The program called for four bedrooms, four and a half bathrooms, a media room, and an open-plan great room. The bedrooms and bathrooms are situated on the second floor and pushed to the exterior for direct access to the viewing decks above the loggia, extending the floor plate. A catwalk that joins the master suite with the other bedrooms dissects the central void within the double-height volume rising from the kitchen, compressing the scale below for a more domestic effect. Within the great room, the building’s slim profile and symmetrical openings allow for cross ventilation in the warm climate. 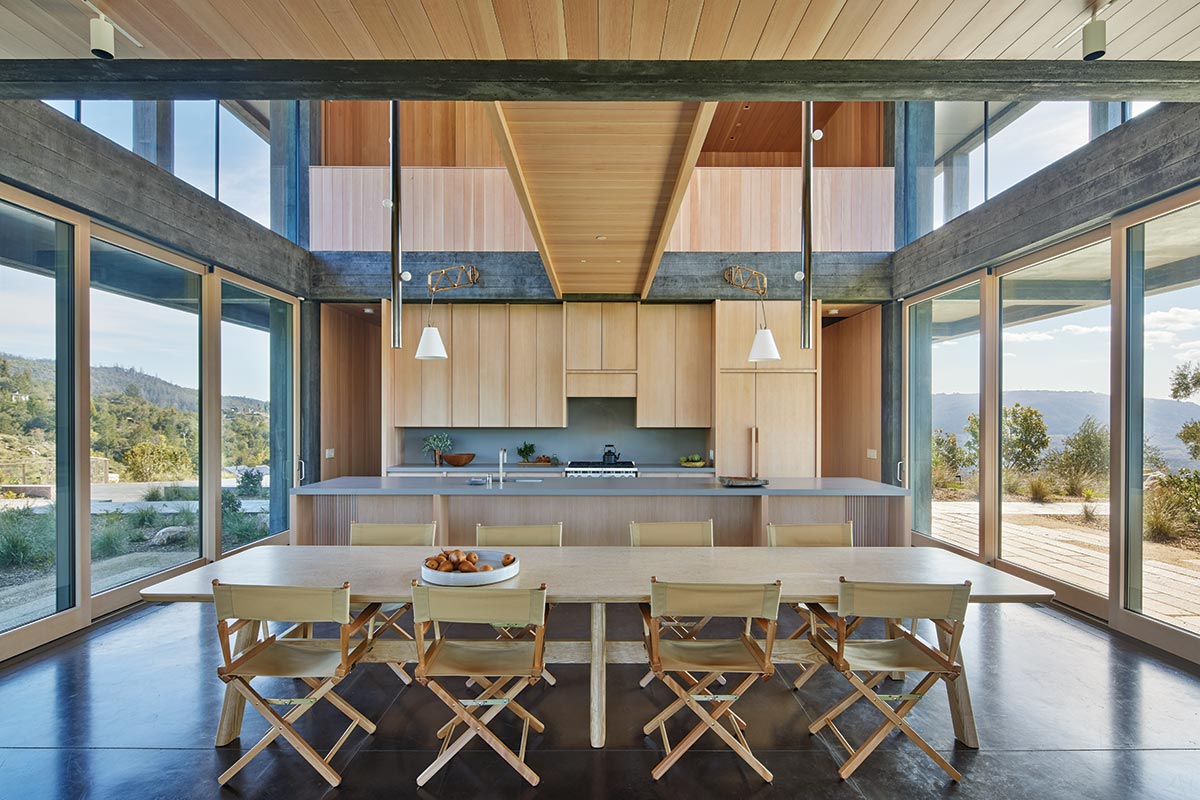 A double-height volume rises from the kitchen. Photo © Bruce Damonte 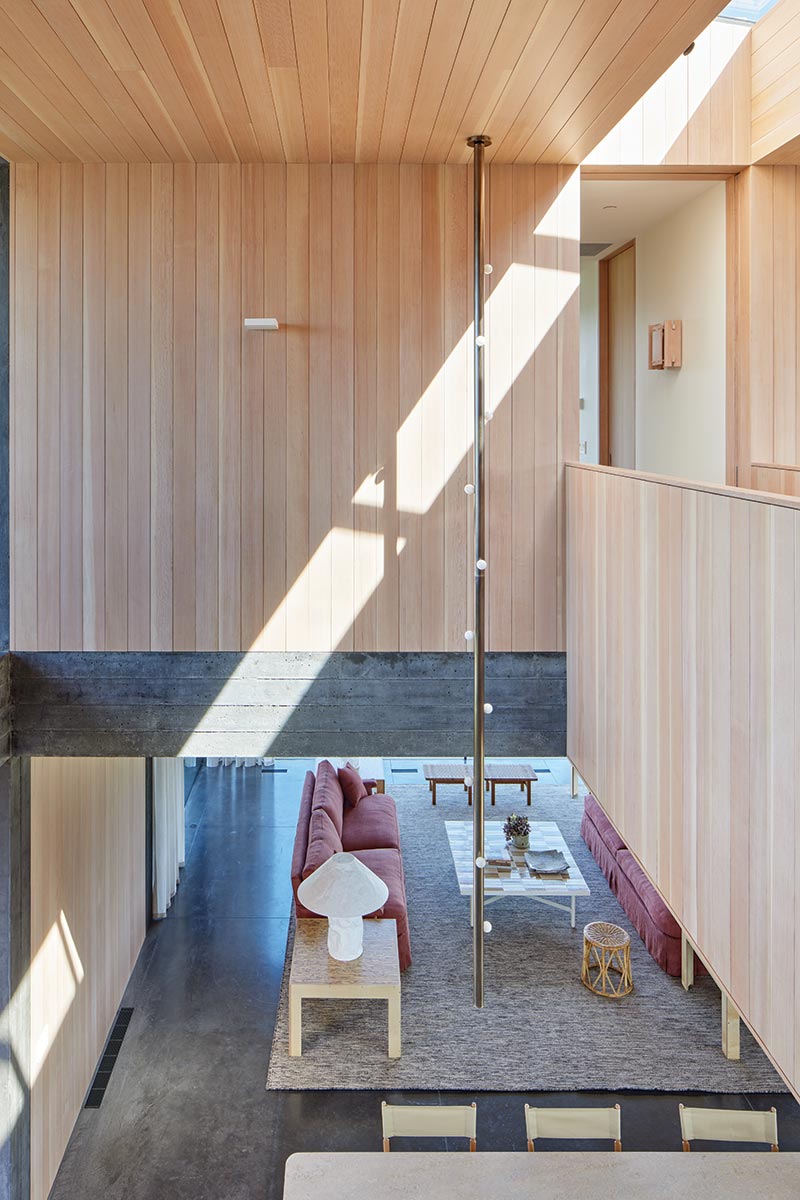 The concrete structure is expressed on the interior, including above the great room. Photo © Bruce Damonte

The interiors are detailed to the highest standard. Bleached vertical-grain Douglas fir dominates without overwhelming, a result of Mork-Ulnes’s deft balance of wood and natural light. (“Light is very dear to all Norwegians,” he notes. “Historically, it’s been up to architects to find ways to bring it in. Here, it’s about calibration.”) Consistent with the precision of the millwork, the board joints perfectly track from wall to ceiling, and differentiation between the shop-finished doors and the field-finished walls is virtually imperceptible. The house’s concrete frame translates as accent bands in the great room, importing a piece of the exterior and providing a textured contrast to the uniformity of the wood.

At the perimeter, every aspect of the surrounding grounds was reconsidered in the building process. Fire-resistant low-water native perennials irrigated from an on-site well have replaced shrubs; new softscape was designed for rainwater reabsorption. The sizable pool, installed by Mork-Ulnes in his first go-round with the property, can perform as a reservoir. Water tanks connect to a state-of-the-art sprinkler apparatus that, in the event of an outage, is supported by photovoltaic panels and a battery system. 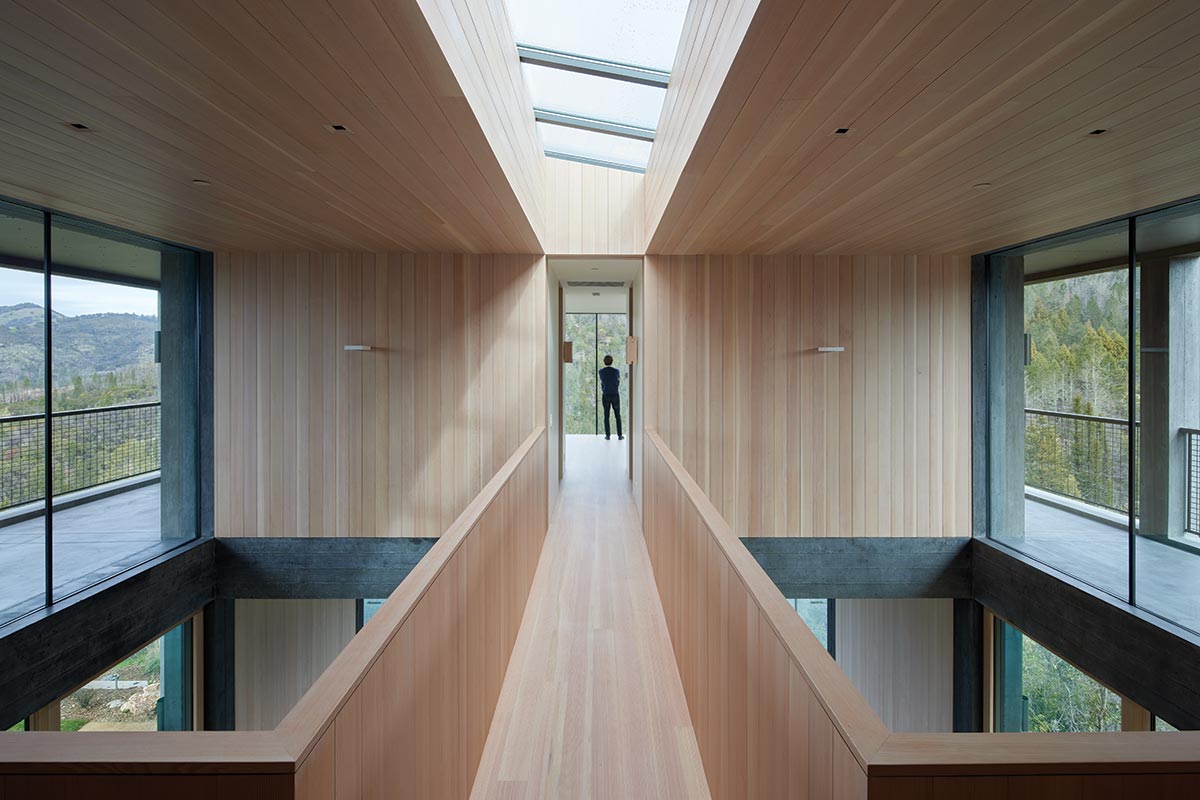 A catwalk (1) connects the master suite (2) with the other bedrooms. Photos © Bruce Damonte 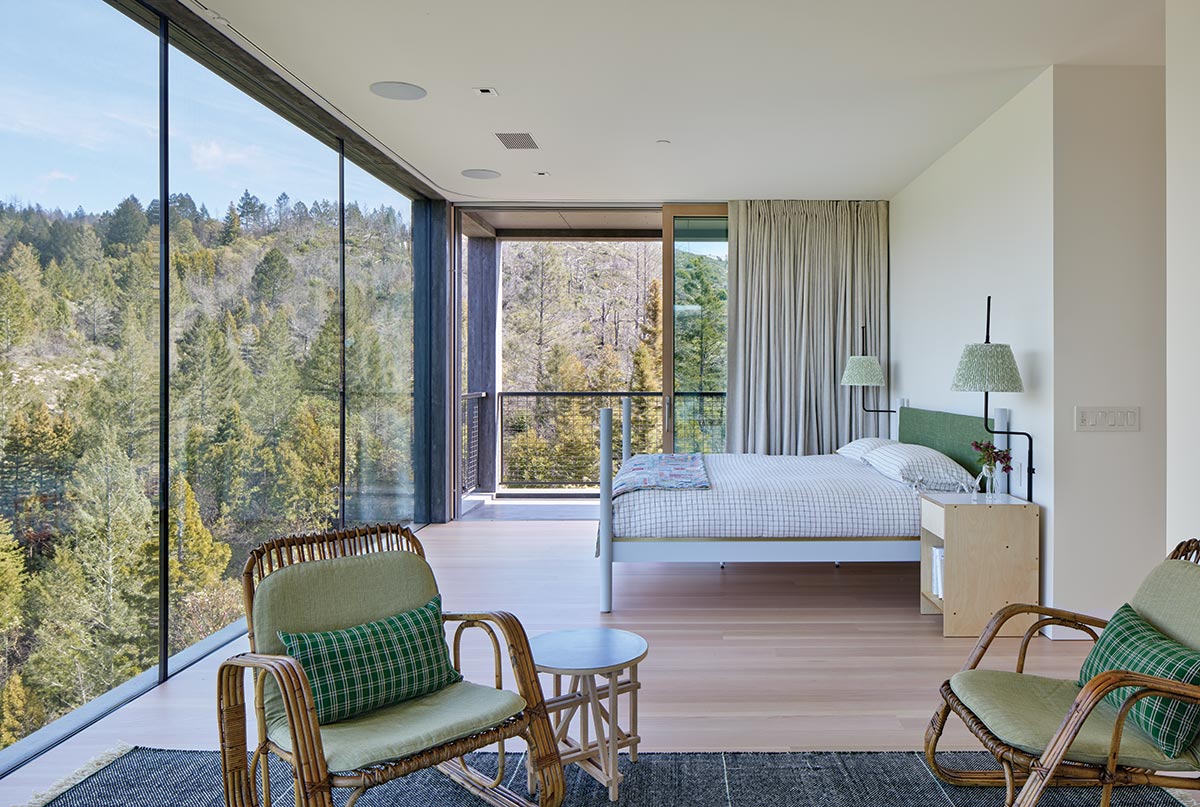 It’s not a monolith of noncombustible material, and it can’t be assumed that the fire gods will spare every element of the building in the future, as happened with the lucky guesthouse. With climate change and resulting hyper-drought conditions, California will remain a tinderbox for years to come, some say permanently. But there is both strength and expectation in having incorporated every proactive measure for mitigating loss without imposing a faceless, bunkerlike presence on the landscape. Here, Mork-Ulnes has wisely presented, in a structure designed to contend with nature’s evolving savageries, a response—not a dare. 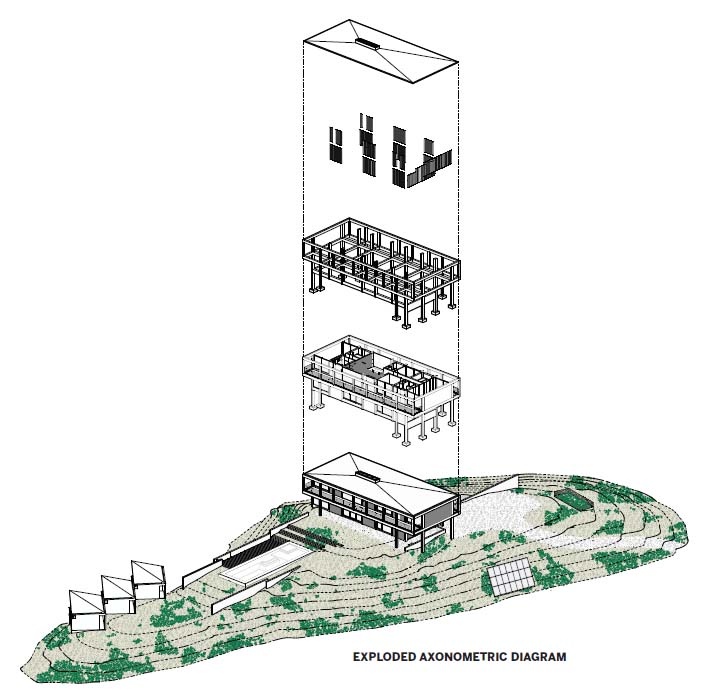