This website requires certain cookies to work and uses other cookies to help you have the best experience. By visiting this website, certain cookies have already been set, which you may delete and block. By closing this message or continuing to use our site, you agree to the use of cookies. Visit our updated privacy and cookie policy to learn more.
Home » John McAslan + Partners Finish Its Refurbishment of The Burrell Collection
Architecture NewsMuseums & Arts Center Projects

John McAslan + Partners Finish Its Refurbishment of The Burrell Collection

When Glasgow’s Burrell Collection Museum was completed in 1983, one of the competition jury members described the building, in faint praise, as “a perfect teaching collection.” In its first year of opening, the museum drew a million visitors from across Glasgow and beyond, (although this annual figure had dropped to 150,000 by 2015). While the collection of 9,000 artifacts–a gallimaufry of architectural fragments, tapestries, medieval Christian statuary, Chinese ceramics, and a vast range of other items assembled by Sir William Burrell—was compelling, the quixotic building that housed them had a great deal to do with the museum’s appeal. A blend of late Modernist, Postmodernist, and high-tech vocabularies fitted to the unlikely typology of the Victorian glass conservatory (popular in Glasgow). The building (with a Grade A Listing) is considered one of Scotland’s greatest 20th century works of architecture. Following its recent refurbishment by the London-and Edinburgh-based practice of John McAslan + Partners, one can see—once again—why. 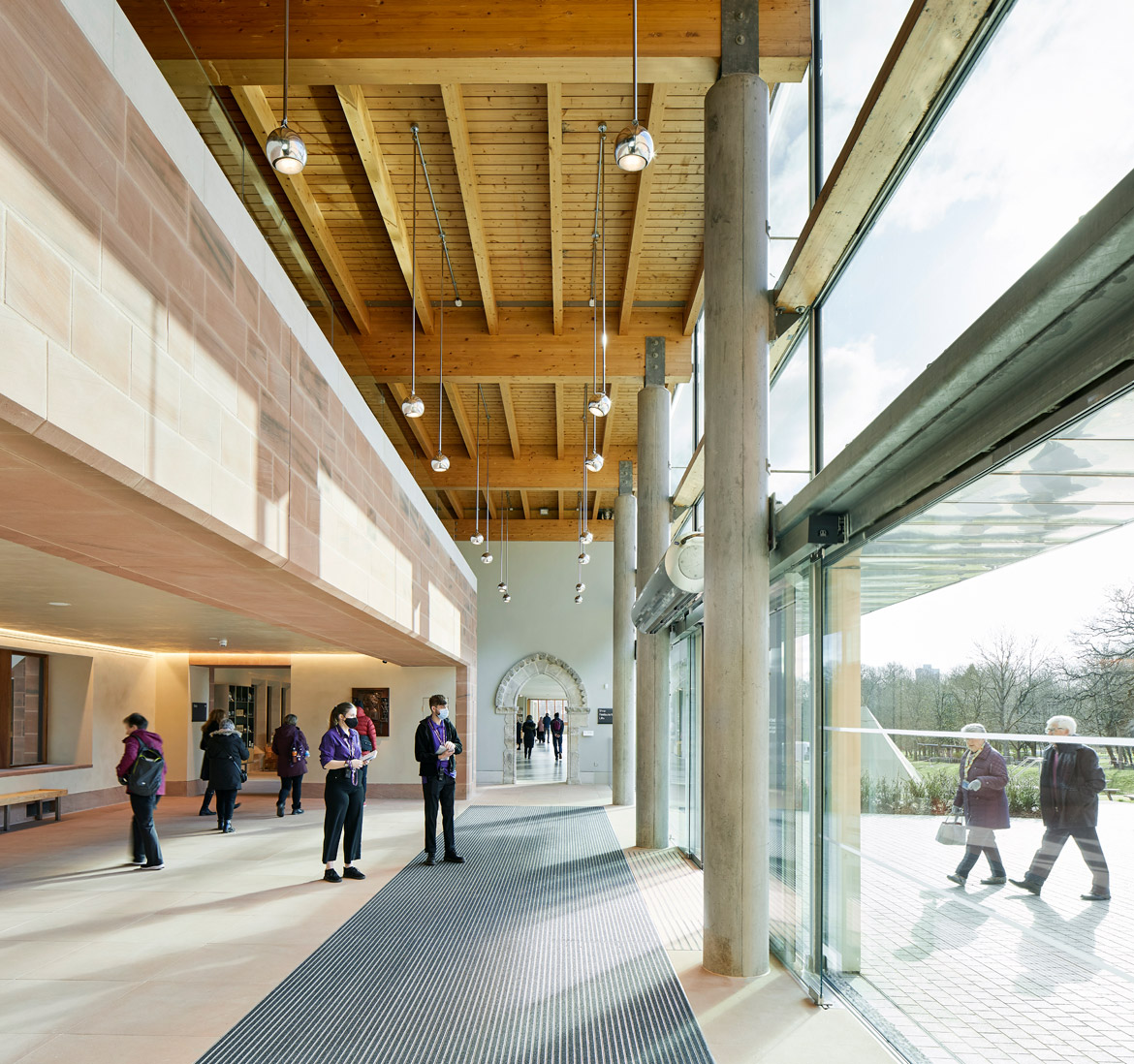 Originally designed by a trio of relatively unknown Aalto-inspired modernists, Barry Gasson, Brit Andresen, and John Meunier (and carried to completion by Barry Gasson Architects), the Burrell stands in the Pollok Country Park three miles south of Glasgow’s city center. Besides providing the above-mentioned “perfect teaching collection” to scholars, it has given both the city and visitors from elsewhere an arcadian experience; a place to enjoy nature and art in harmony. With a triangular plan in the shape of an X-Acto knife, the existing museum sits in a nook enclosed by a wooded glade on the west and the north, while a meadow and lawn open to the east and south.

The blade edge faces north, where the original architects installed a glass facade so that Burrell’s collection of small-scale, medieval objects, and artworks could be seen against an intimate backdrop of greenery and leafy trees that modulate the sunlight and have beguiled visitors for decades. On the south, Gasson, Andresen, and Meunier wrapped the timber-ribbed structure in a then-state-of-the-art external blind and glazing system on which they mounted Burrell’s collection of stained glass inside. 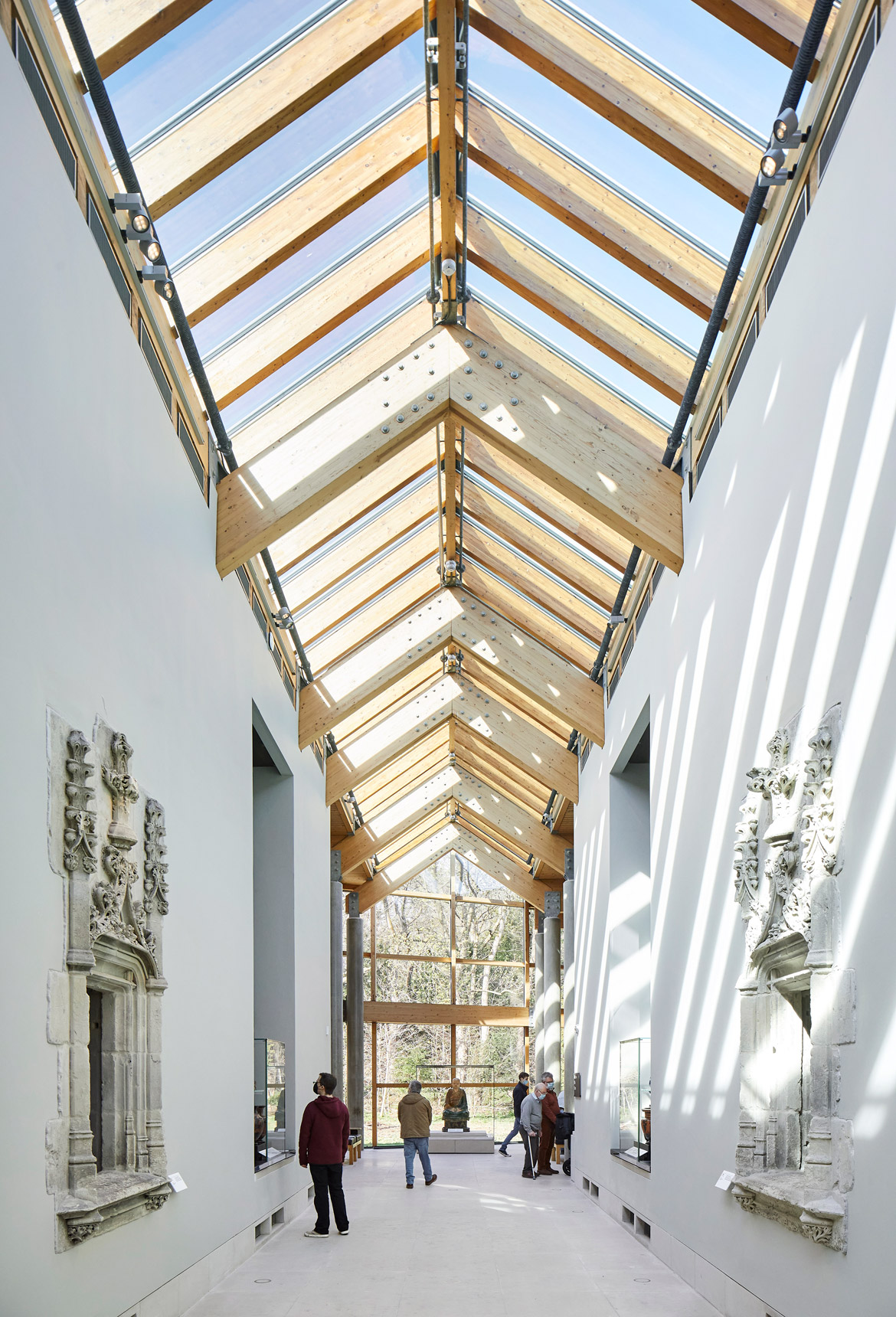 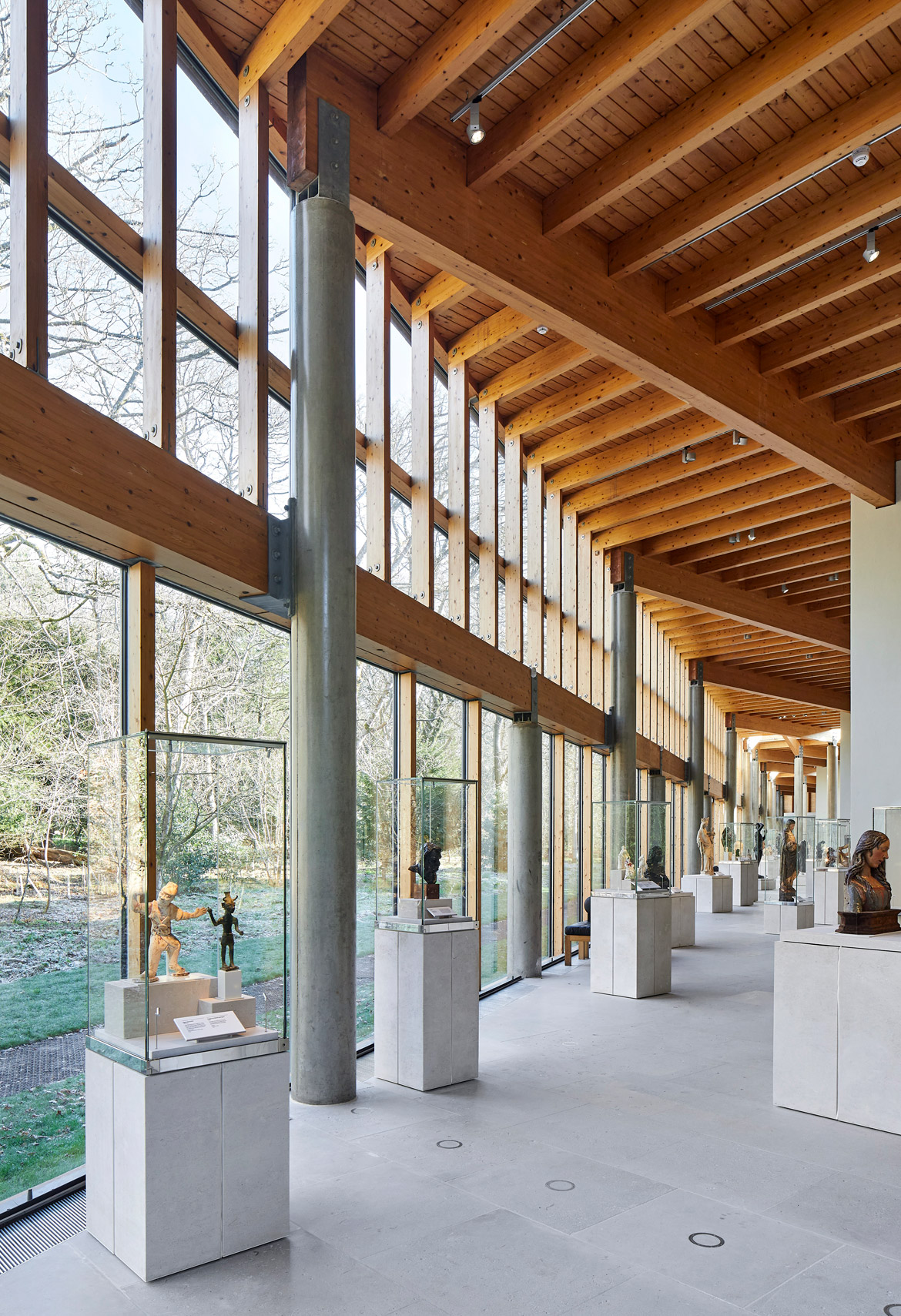 “Walk in the Woods,” the procession along the north elevation. Photo © Hufton + Crow

The circulation through these spaces was straightforward but inflexible. The visitors followed a processional route through the museum that began at an arched stone entrance placed in a blank, sandstone, end wall of a narrow wing on the south. From there they walked through the gabled structure, heading into an enclosed courtyard, before passing through another arch leading to the main galleries defined by the north edge’s long, glass wall. Feeling almost as if they were a part of nature, they proceeded northeast on a diagonal through a space dubbed a “walk in the woods” 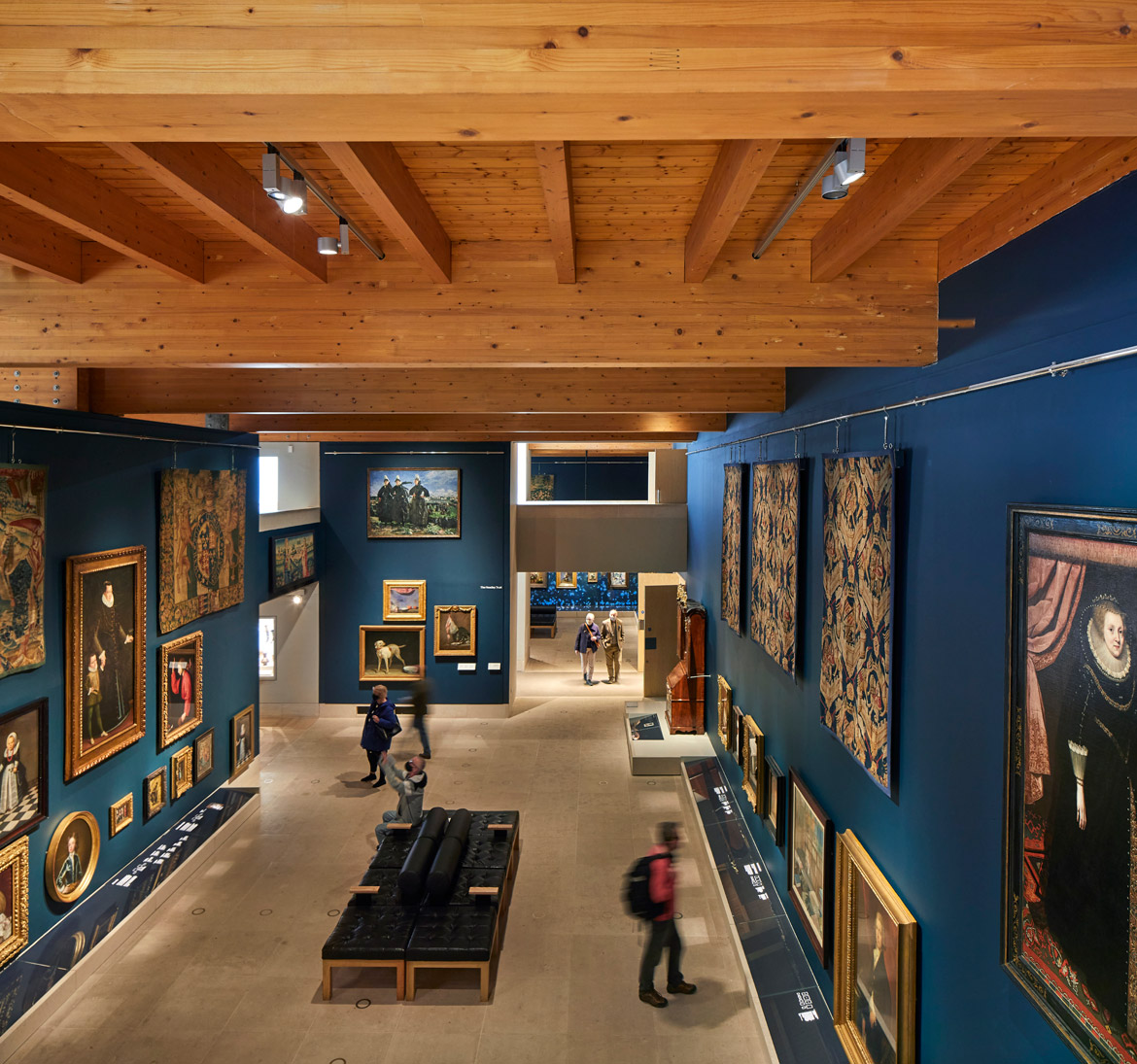 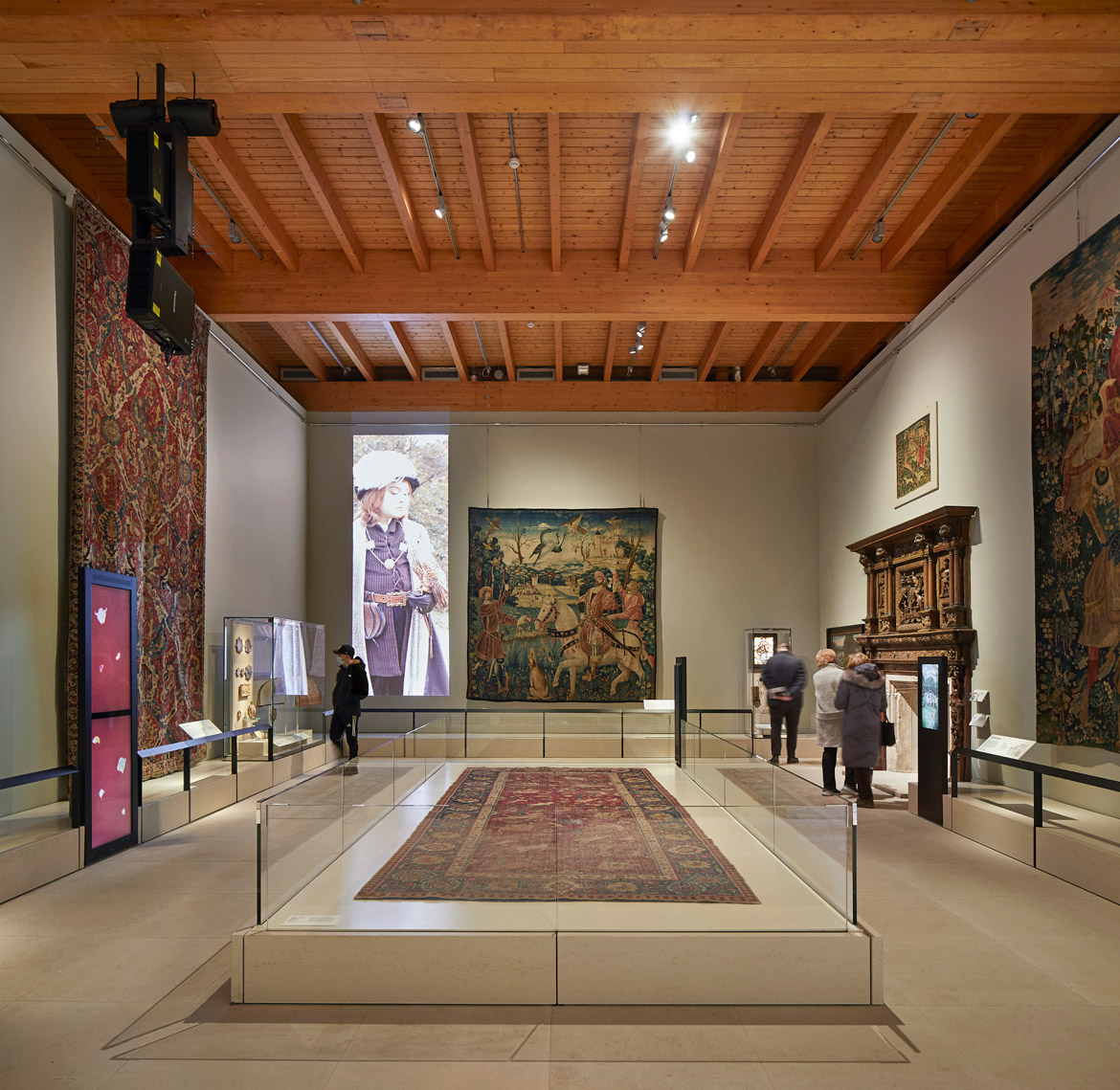 The design of the building fit the collection perfectly, but the years were not kind to the museum—on both a technical level, as well as a more conceptual one. The glazing systems that made this juxtaposition with nature possible did not hold up. The stainless -steel standing seam roofing failed. The display cases lacked lighting and were substandard. Before it was closed in 2016, the roof was leaking, and sections of the 143,000 square-foot building had been closed off. 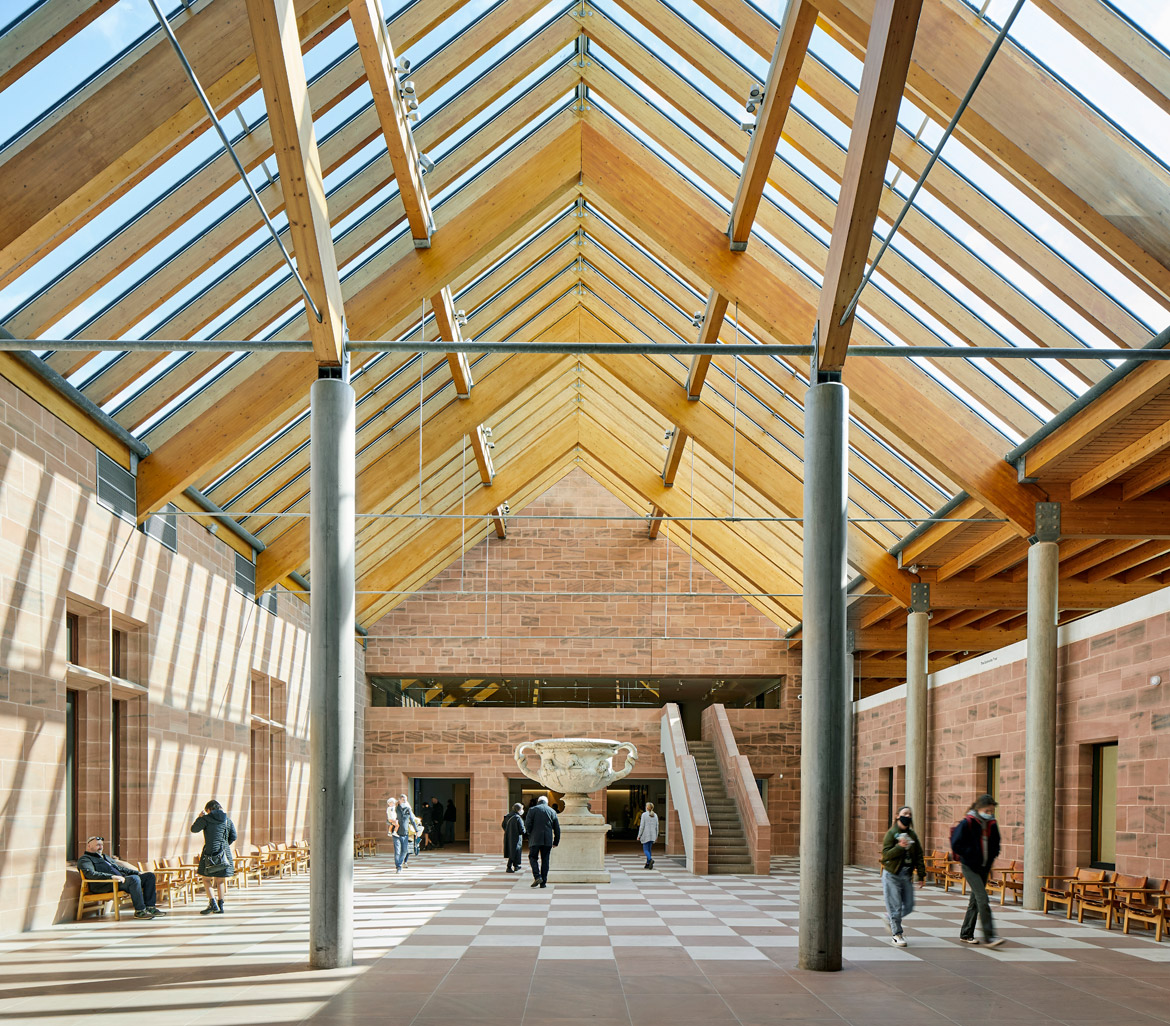 Courtyard is in the former location of the dining room replicated from Hutton Castle. Photo © Hufton + Crow

In addition, the way in which the building was conceived as a didactic space with a lecture hall given a prominent central location ran counter to the expectations that a 21st century museum would have more room for cafés, orientation, and other services.

McAslan’s biggest move has been to take out the lecture hall and then cut open the floor plate to insert stairs and stepped seating leading down to the basement level. Here in this “agora,” visitors find an expanded café and a new temporary gallery that is triple the size of the former one upstairs, which is now used for permanent display. In addition, the architects converted basement storage areas into spaces for tour groups and expanded the mezzanine above the main floor as well. 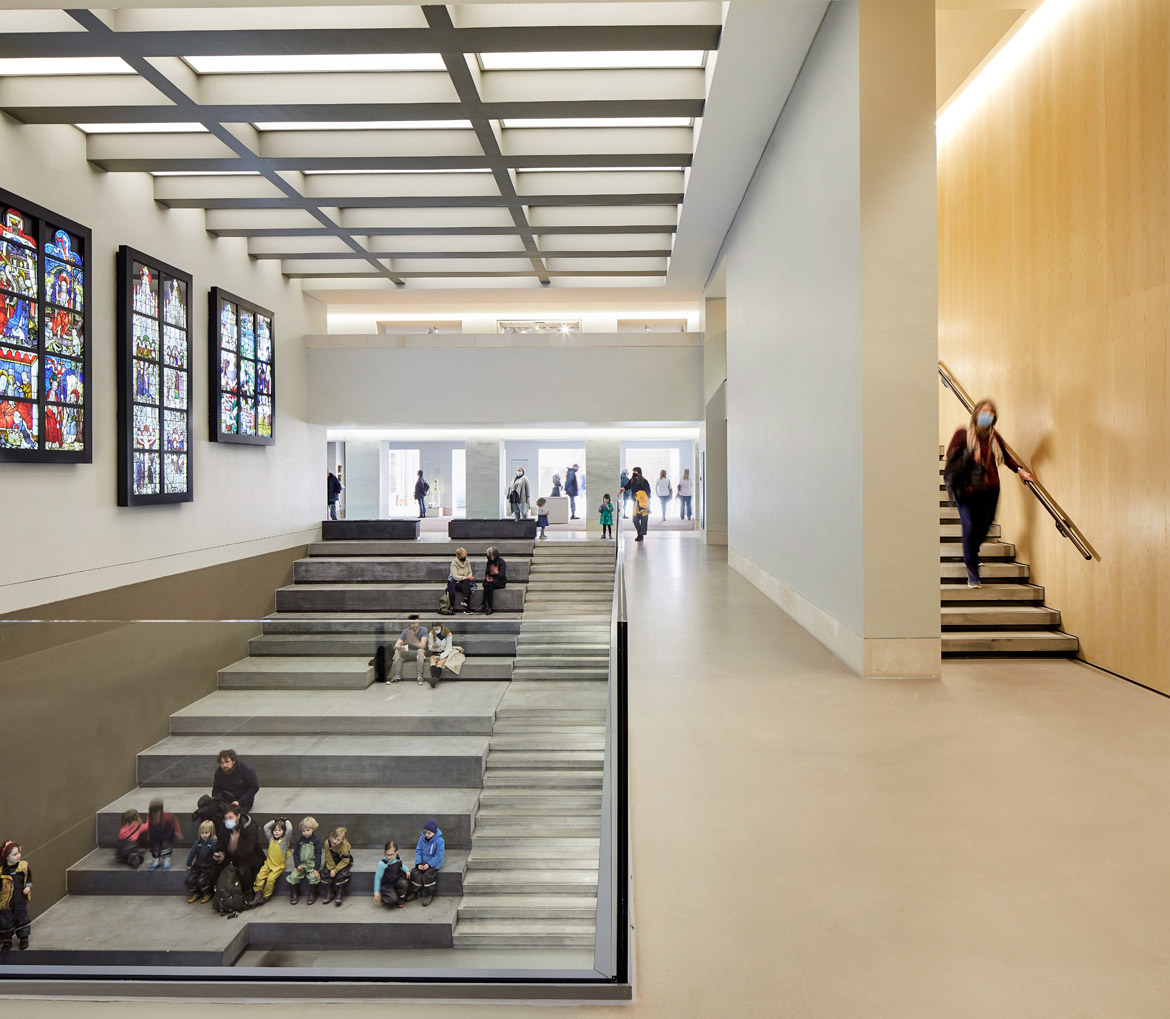 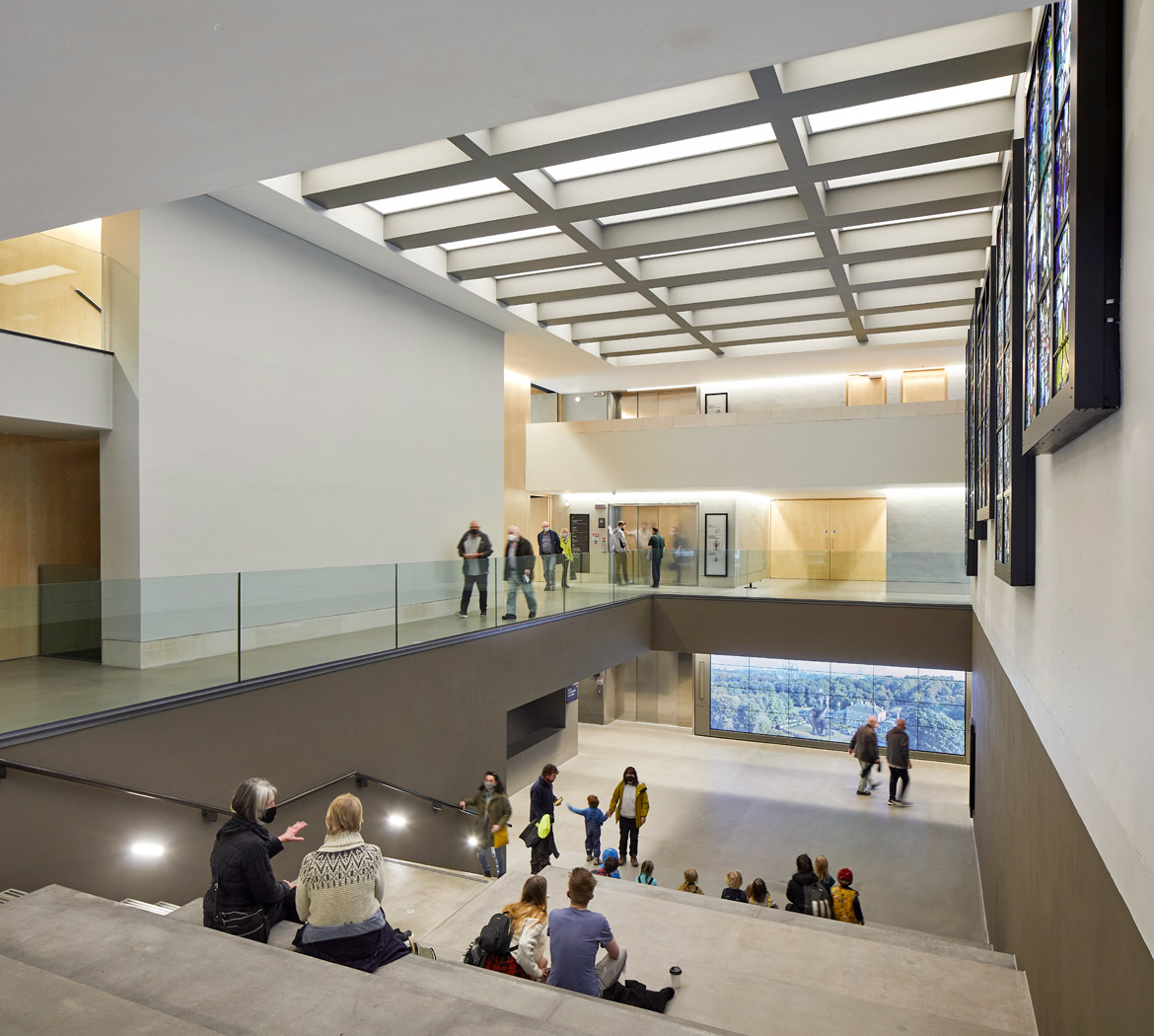 The new Agora (3) in the center of the museum, and the center's stairs (4) leading to the lower-level café and services. Photos © Hufton + Crow

Because the conservation department (which had previously occupied the mezzanine) had decamped to another location in Glasgow, McAslan was able to do away with studios and offices on this level and install permanent exhibition galleries that have increased the overall total by 35 percent. Now 5,500 objects from the collection are on display, up from 1,800 originally on view, and the public is better able to appreciate the singular intellect of the collector as well as the individual qualities of his acquisitions. To create this new hub and improve circulation, McAslan removed two of the three quirky “Hutton Rooms” that had replicated, to an odd scale, in Burrell’s own home, Hutton Castle. (He also replaced the lecture hall.)

As for the technical improvements, the architects reused or replaced all the conservatory-like glass for higher performance, while upgrading the existing curtainwall system with new gaskets. Initial tests show that this glazing system will reduce operation costs by around 60 percent. Atop a new asphalt roof, the team added a 120kw photovoltaic array linked to heat reclamation chillers that recover heat from the mechanical rooms. The Burrell Collection is the first museum renovation in the UK to receive the highest certification from BREEAM —the prevailing sustainability assessment protocol. 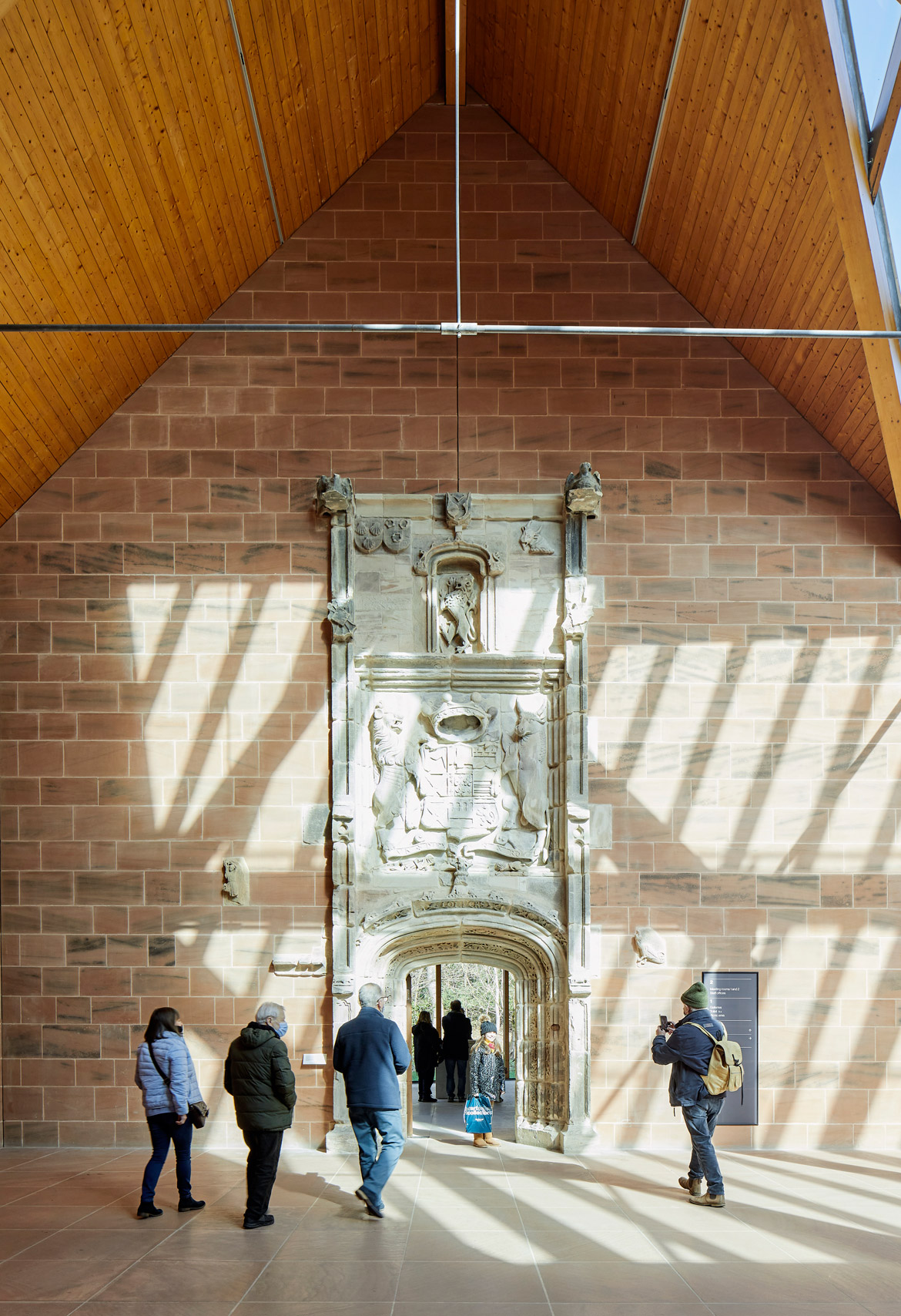 Portal from Hornby Castle next to the Courtyard guides visitors to north galleries. Photo © Hufton + Crow 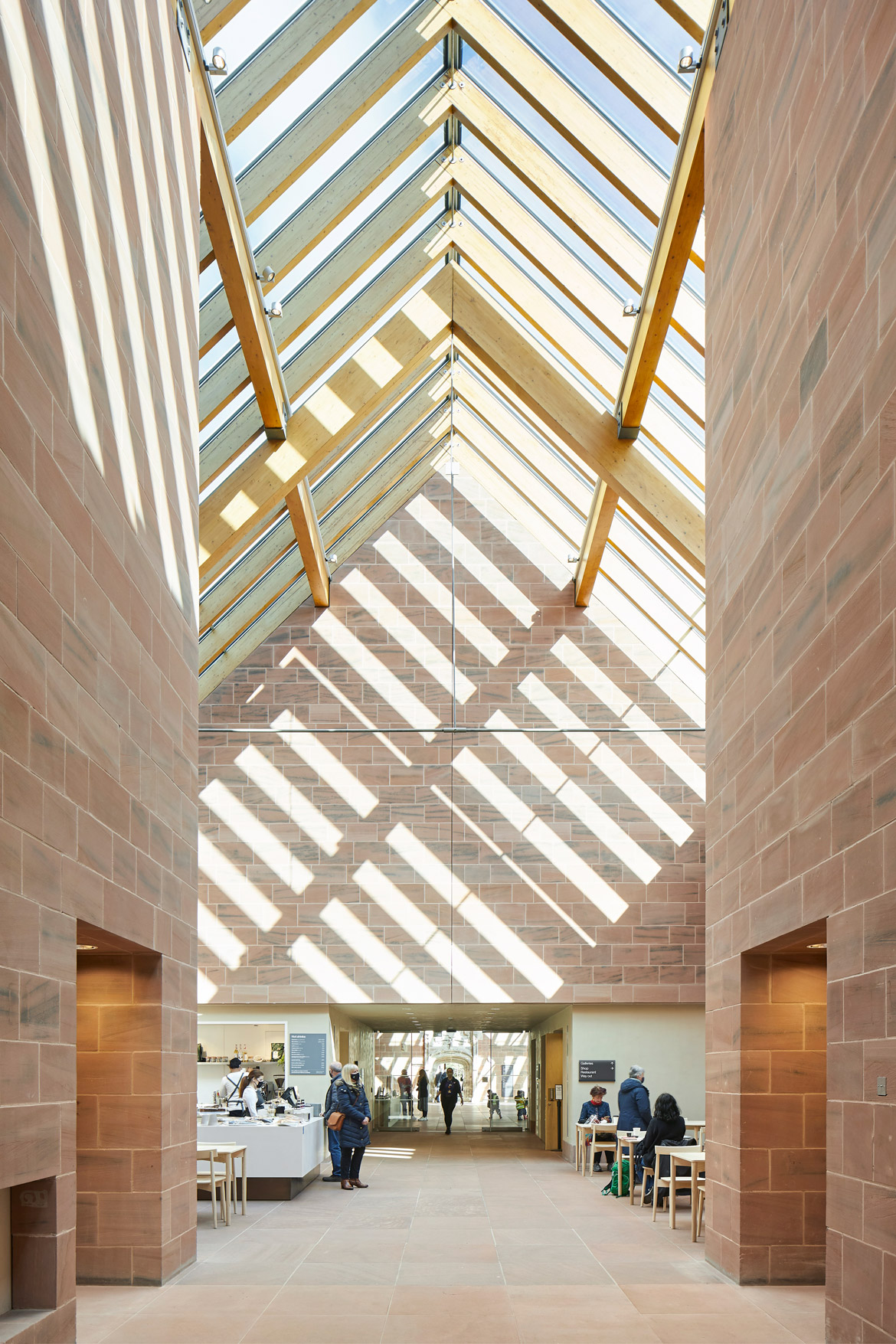 McAslan’s response to the former circulation solution, however, has upset some of the old guard who liked its explicit path of movement. While the architectural team kept the former entrance, it created a new larger one on the south facade, which brings visitors from the park directly into the agora. Despite the unease in some quarters, it is an excellent improvement. Furthermore, McAslan’s conversion of the former entrance wing into a two-story education space is logical. It still provides access and a sense of procession, but it’s just not the only means of passing into the building from the park.

Times change, and museums now have more pronounced social roles than the Burrell had in the mid-1980s. The alterations made by John McAslan + Partners provide greater permeability to the building and allow visitors to enjoy more of the collection. The new changes in the $92 million renovation are utterly contiguous with its original programmatic and aesthetic intentions, and despite the alterations, reveal more of this gorgeous, idiosyncratic original to the public. 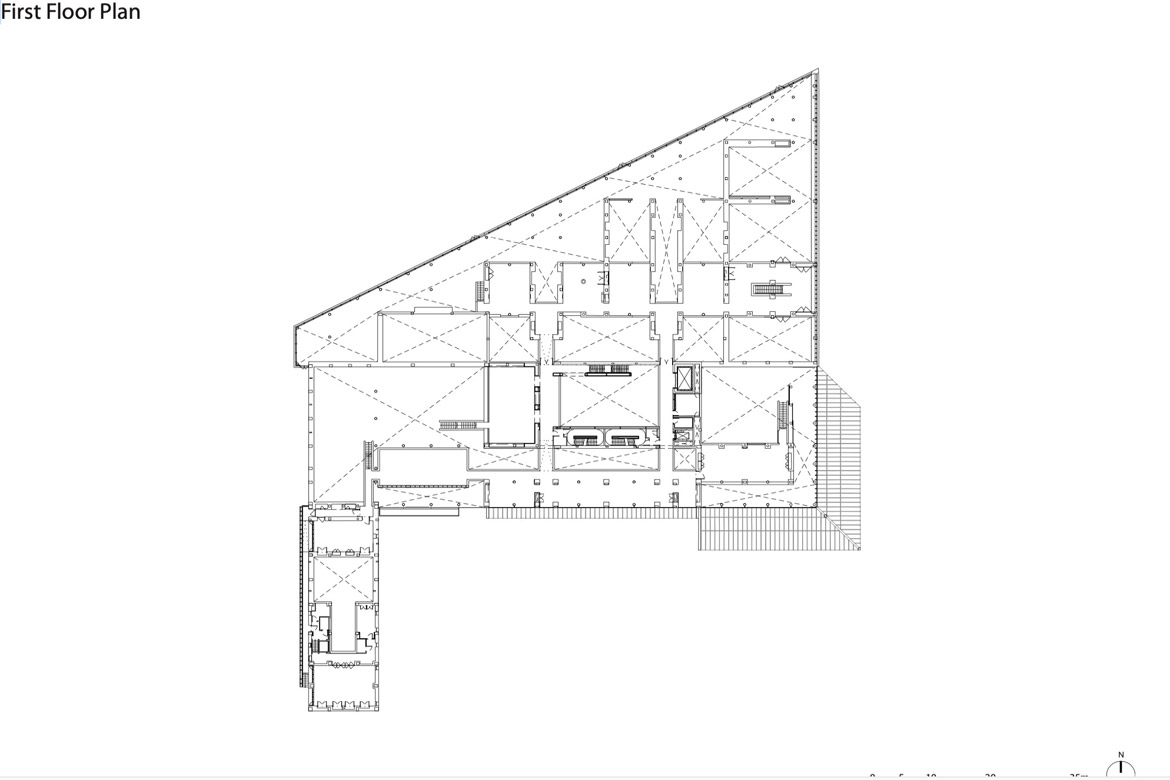 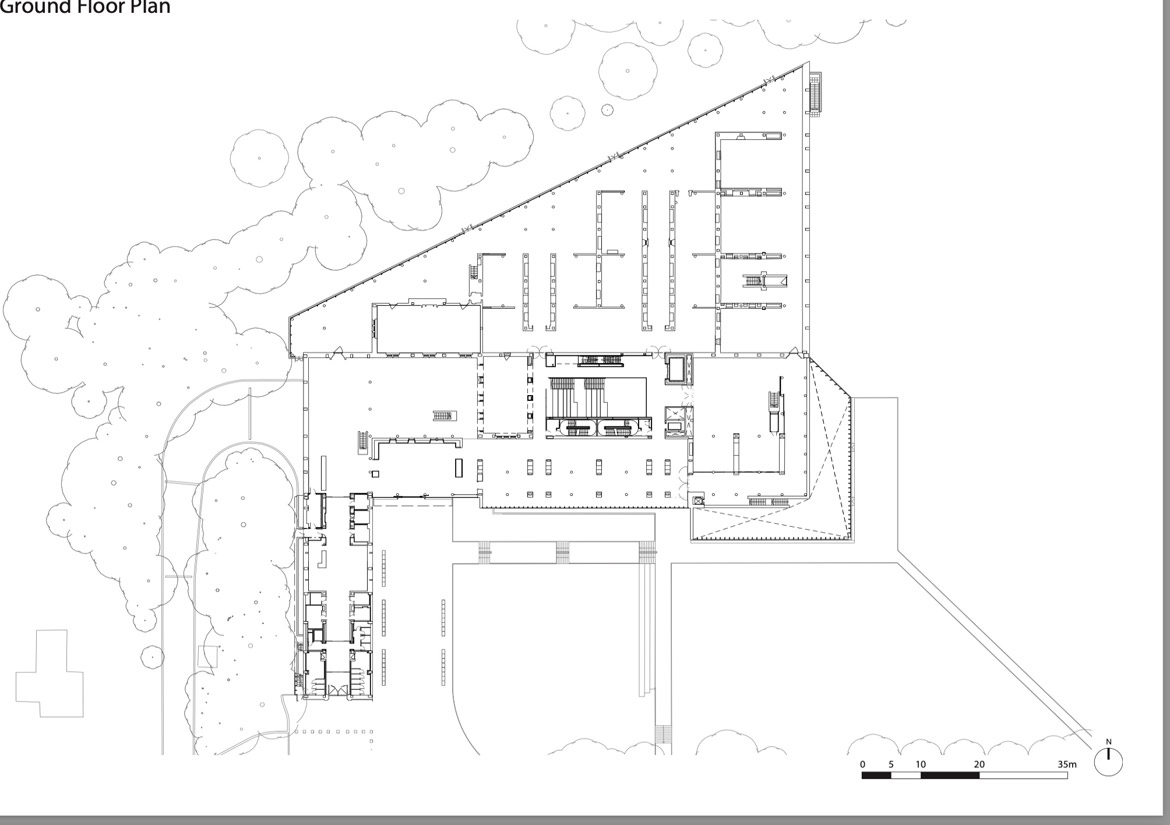 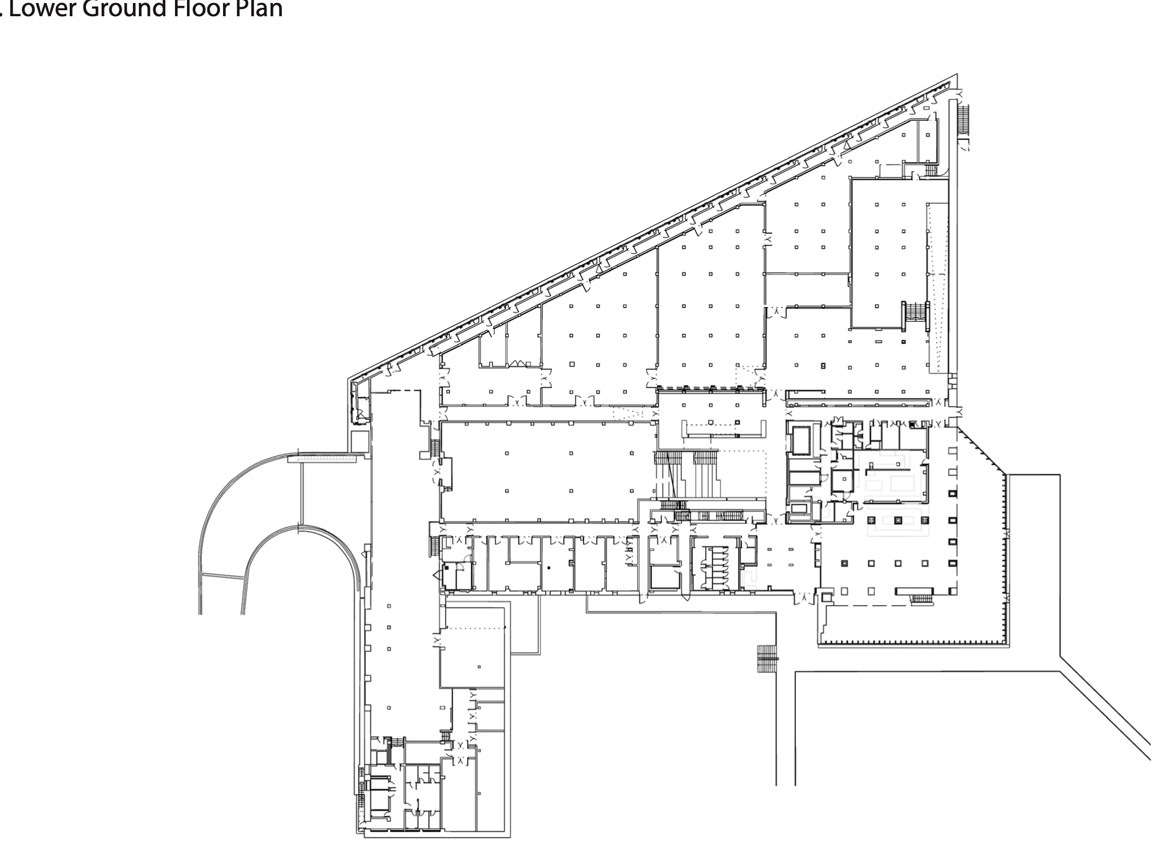