Chicago Exhibition Interrogates Design Justice and the Legacy of Racism

Walking south along Wabash Avenue to the Glass Curtain Gallery at Columbia College in Chicago, passersby are immediately struck by oversized bold, black lettering: You Are A(nti) Racist. These forceful words are the title of a new exhibition conceived by Design as Protest, now known as the DAP Collective (on view through April 21).

Initially started in 2015 by the New Orleans-based architect and design justice promoter Bryan Lee, Jr., DAP was later relaunched with the aid of design activist De Nichols in August 2020, in the aftermath of the killing of George Floyd. The collective is made up of BIPOC designers from the United States, Canada, and the United Kingdom. At Columbia College, DAP’s curatorial team has created a provocative exhibition drawing upon the title—with the second part of the word "A(nti)" grayed out—to force visitors to consider: Are You A Racist or Are You Anti Racist? This title is followed by three taglines: “Challenge Power,” “Dismantle Systems,” and “Design a Justice World.”

The first part of the exhibition provides a big-picture overview of the collective and celebrates the work of its members, centered around design justice and racial protest, from the the VanPort Mosaic Project-History Now!, to the Anti-Racism Resources List compiled by Bz Zhang, to a video installation of Instagram Live sessions conducted by De Nichols and other members. The work is further documented in the DAP Collective’s broadsheet, a publication mirrored in the show’s design with its series of colorful panels that include a wealth of images and information, from a chronology of key events between 2017 to 2021 to DAP’s Anti-Racist Design Justice Index (ARJDI). 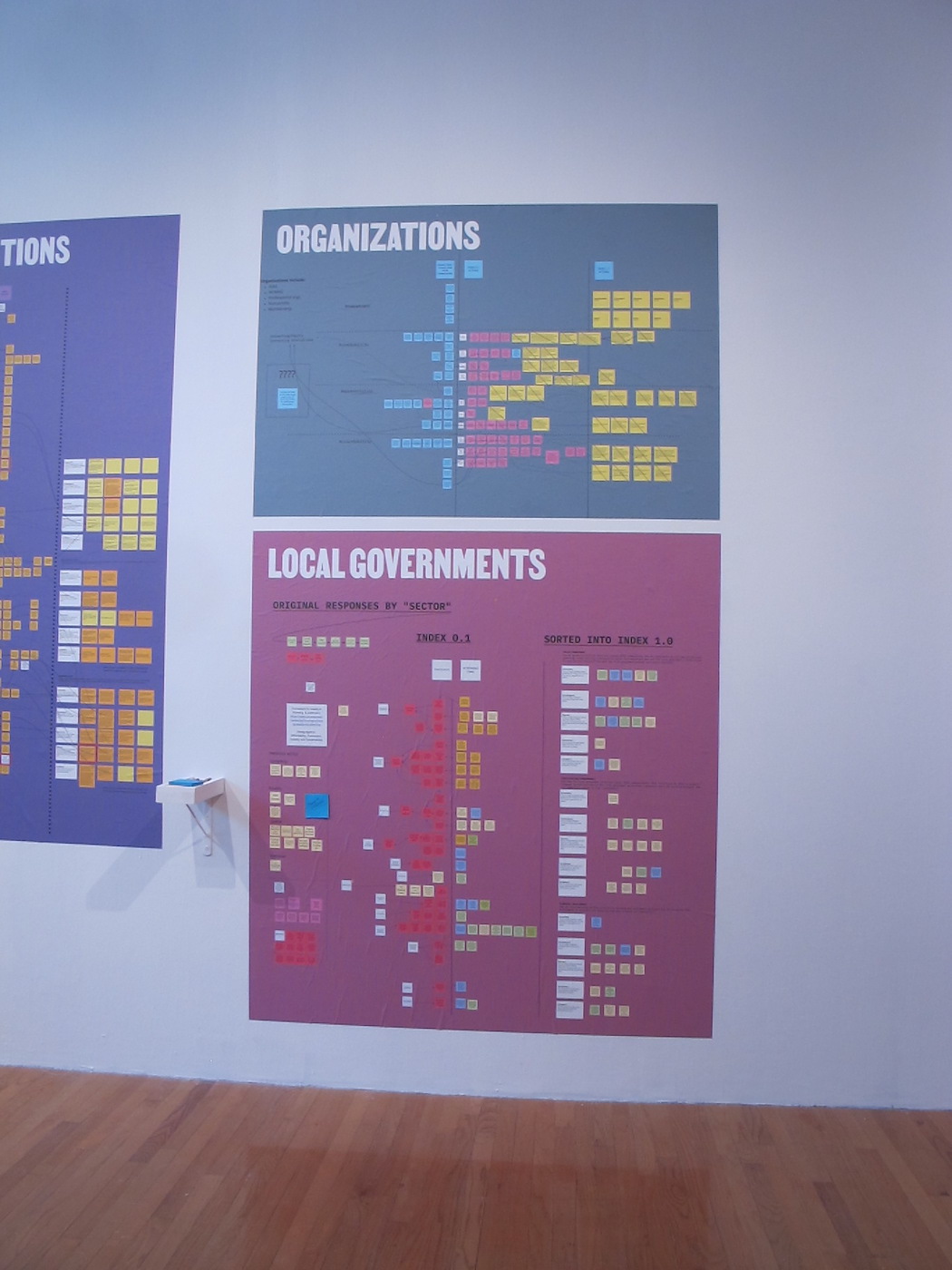 The index, deploying more colorful infographics, is organized around four themes: design practice, academic institutions, organizations, and local government­, with data compiled by a research team. Each sub-index, expressed via a data mapping system with Post-It-style cards, is packed with information about design methods and strategies that address design justice and demonstrate how to bring activism into the classroom and other public spheres. Boxes of Post-It notes and markers enable visitors to respond to specific questions posed in the exhibit or add their own reflections. The index has already gained traction nationwide through workshops, including at a session of the Harvard Graduate School of Design’s WOMXN in Design conference in March 2021.

Also included in the first section of the exhibition is Zhang’s Anti-Racist Design Resource—a list of everything from maps to research opportunities, displayed in three rows stretching from one wall to another—an overwhelming sight, but one that offers comprehensive research. (The resource, which continues to grow, is also available online.) 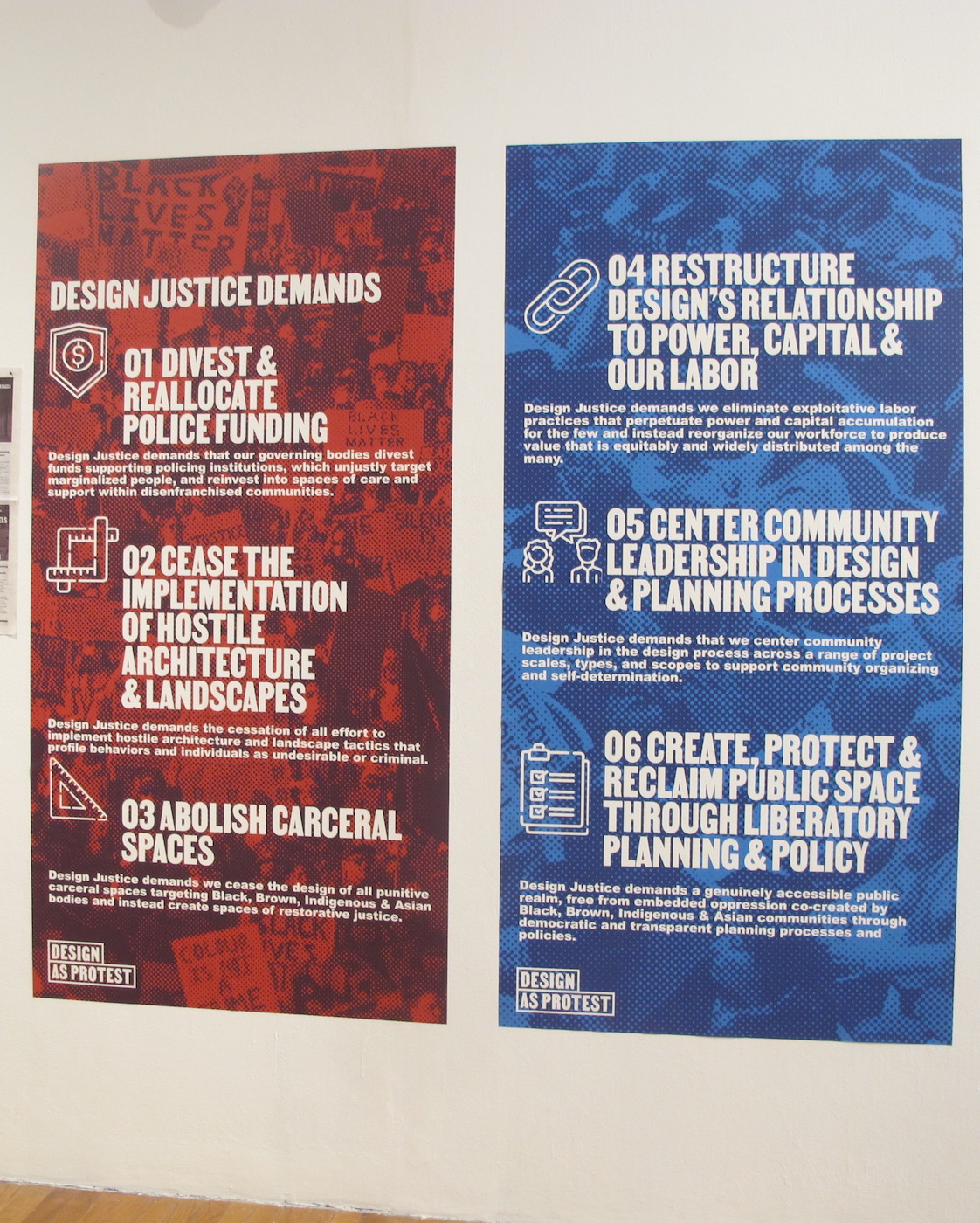 Visitors can also review DAP's nine demands on two colorful, oversized posters reminiscent of the Black Panther Party manifesto produced in October 1966. The demands range from rethinking issues of mass incarceration to ceasing the implementation of hostile architecture, such as design interventions that prevent people from occupying spaces below overpasses or from lying down at bus stops.

The demands are coupled with the VanPort Mosaic Project-History Now!, conceived by DAP member Karim Hassanein in collaboration with several community-based organizations in Portland, Oregon. Initially displayed in local storefront windows, the project tells the story of a once-thriving Black community in Portland that was destroyed by flooding in 1942; it prompts designers to consider the displacement and destruction caused by today’s climate crisis and asks them to reframe how they address race and justice in the built environment. 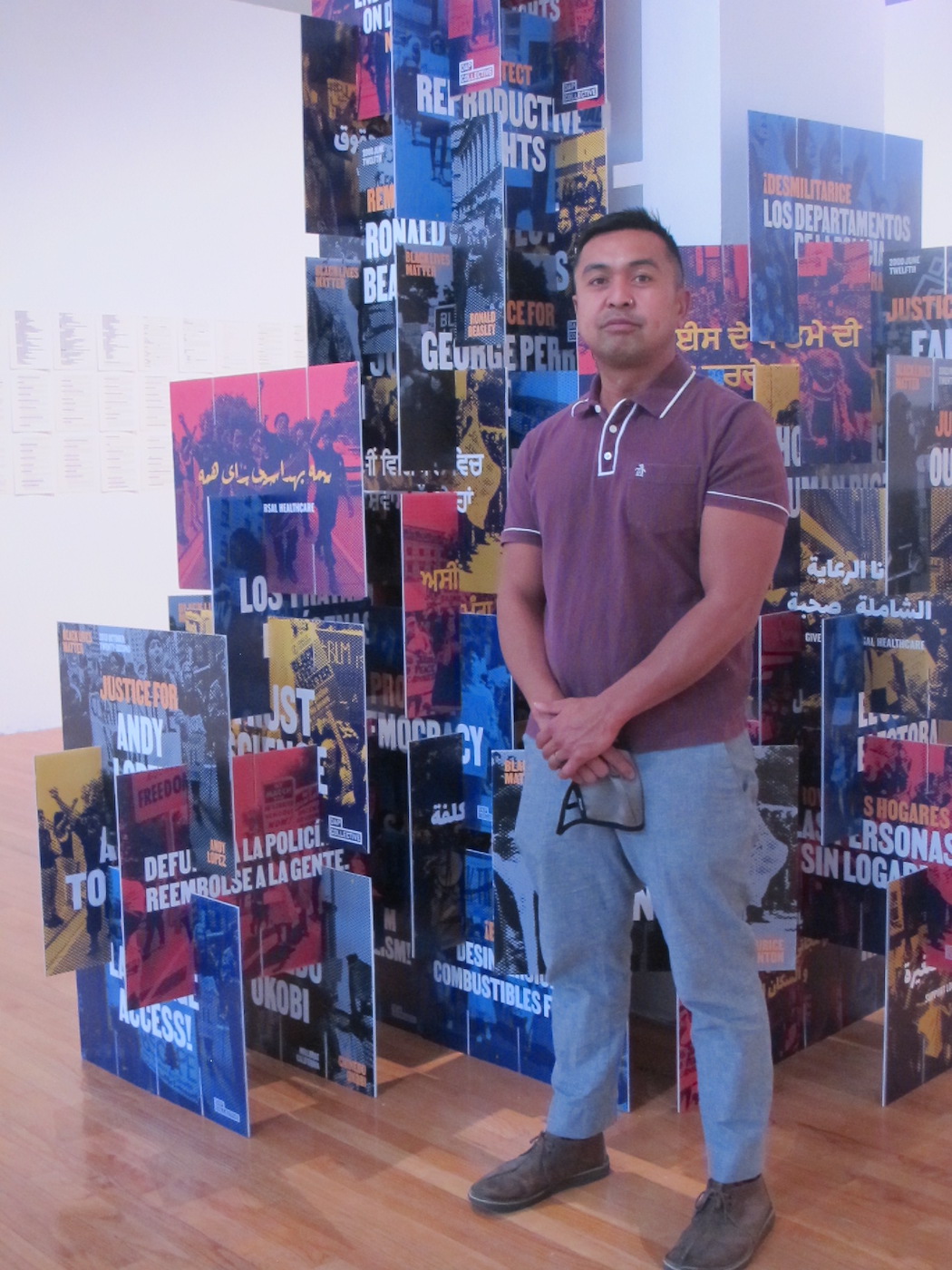 The second section of the exhibition, entitled DAP Collective Demands Interpreted, is located in a room at the rear of the gallery. It consists in large part of work by Columbia College graphic design students, curated by their professor, Dave Pabellon, who is a DAP Collective member. Pabellon crafted a course syllabus based on the DAP demands, challenging his students to investigate design justice. Unlike the designers featured in the first section, these students have little experience with designing buildings or landscapes. Nonetheless, they are able to explore issues of racialized cultural spaces, carceral spaces, hostile architecture, and xenophobia in the rebuilding of communities affected by Covid-19.

Visitors are guided through this section by a long, narrow horizontal strip of graphic signifiers with embedded QR codes. This allows them to engage in experiential activity through augmented and virtual reality, by using the Adobe Aero smartphone app. Stepping into a small, adjacent room, visitors then see four students’ designs for a series of diptych and triptych posters, the former depicting hostile architecture and the latter tackling spatial removal and cultural erasure in Chinatown. Each poster has a powerful tagline such as “I Know I'm a Human first” or “My Town, Chinatown.” Together, they present an extensive interrogation of how the students interpreted DAP’s demands, capturing problematic humanitarian issues throughout Chicago's neighborhoods.

The exhibit provides architects, designers, urban planners, and community groups with a wealth of knowledge and the tools to create their own action-based design justice initiatives. And by coupling the work of leading designers with that of graphic design students, it reveals exploratory exchanges between students and professors that suggest new avenues for the teaching of design justice in the classroom.

The DAP Collective will hold DAP Speaks and DAP Workshops that are open to the public. Registration is preferred but not required:

Michele Y. Washington is a design critic, writer, and design researcher. She maintains a design consultancy that focuses on branding strategy, design, and cross-cultural research.

The Legacy of Racism in the Making of Cities and Communities