“When we founded our practice, Office for Political Innovation, we were hoping to prove that architecture could have a direct impact on the political structure of a place like Spain,” says the firm’s Madrid-born, New York–based principal Andrés Jaque. “With time, we discovered that the niche in which we could operate was very much the space of dissidence.”

Located in a suburban development outside the small town of Molina de Segura, in Spain’s southern province of Murcia, this project is just such an act of subversion. Like so many housing developments in the country, this one seems to have been slapped down arbitrarily on the arid hilly landscape, its grid of hard, impermeable streets taking little or no account of topography, its regular lots filled with cookie-cutter neo-Mediterranean villas or catalogue-bought Modernist knockoffs. Imported palm trees, swimming pools, and plastic lawns proliferate in the windy climate.

“I suspect the urbanists who designed this never even came here,” says Jaque. When local architect Miguel Mesa del Castillo Clavel was approached by his brother and sister-in-law to build them a family home, he called up his old teaching chum Jaque and suggested that together they design a manifesto for change. 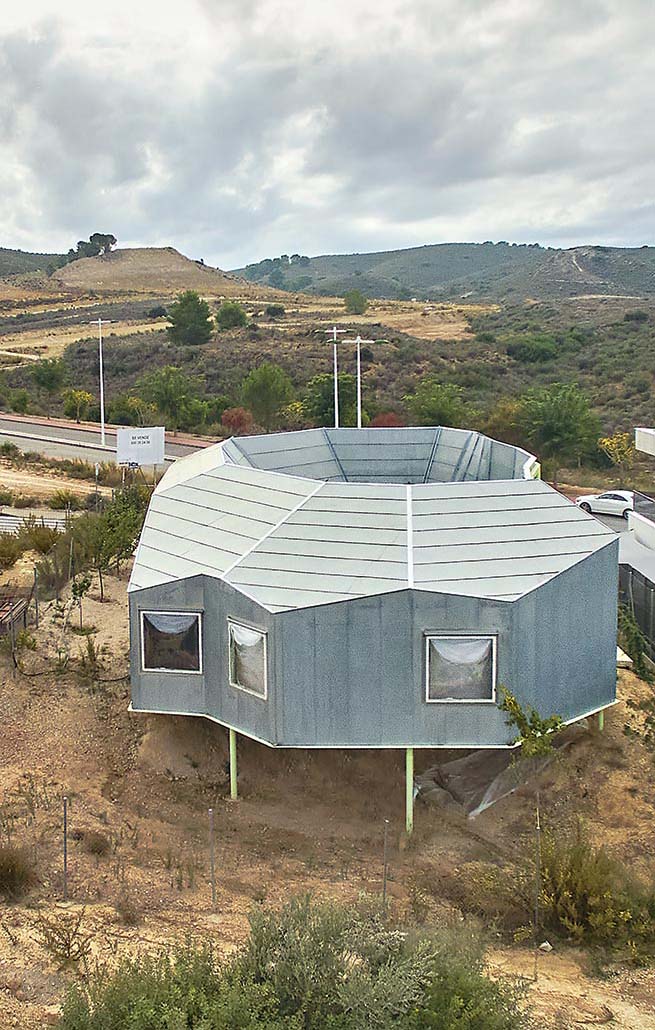 The Rambla Climate House, as it is called by the architects, is built on land edging a dry riverbed. Pilotis lift the polygonal house above the rugged terrain. Photo © José Hevia, click to enlarge.

True to their pledge, the house’s greater contrast with the neighbors’ would be hard to achieve. “My brother and his family came here to be close to nature,” says Mesa: “Every year they take their camping car for long summer vacations in the countryside.” Their lot is on the edge of the development, overlooking publicly owned unbuildable land through which runs a rambla—a dry riverbed that fills up only every five years or so when there are heavy rains.

“Look at all the wild species growing in the rambla,” continues Mesa, whose research interests include Derek Jarman’s rugged pebbled garden on the windswept English coast of Dungeness. “Fig and mastic trees, laurel, myrtle, Mediterranean dwarf palms...Our idea was to recreate these conditions at a domestic scale, so that you can enjoy the countryside within your home.” 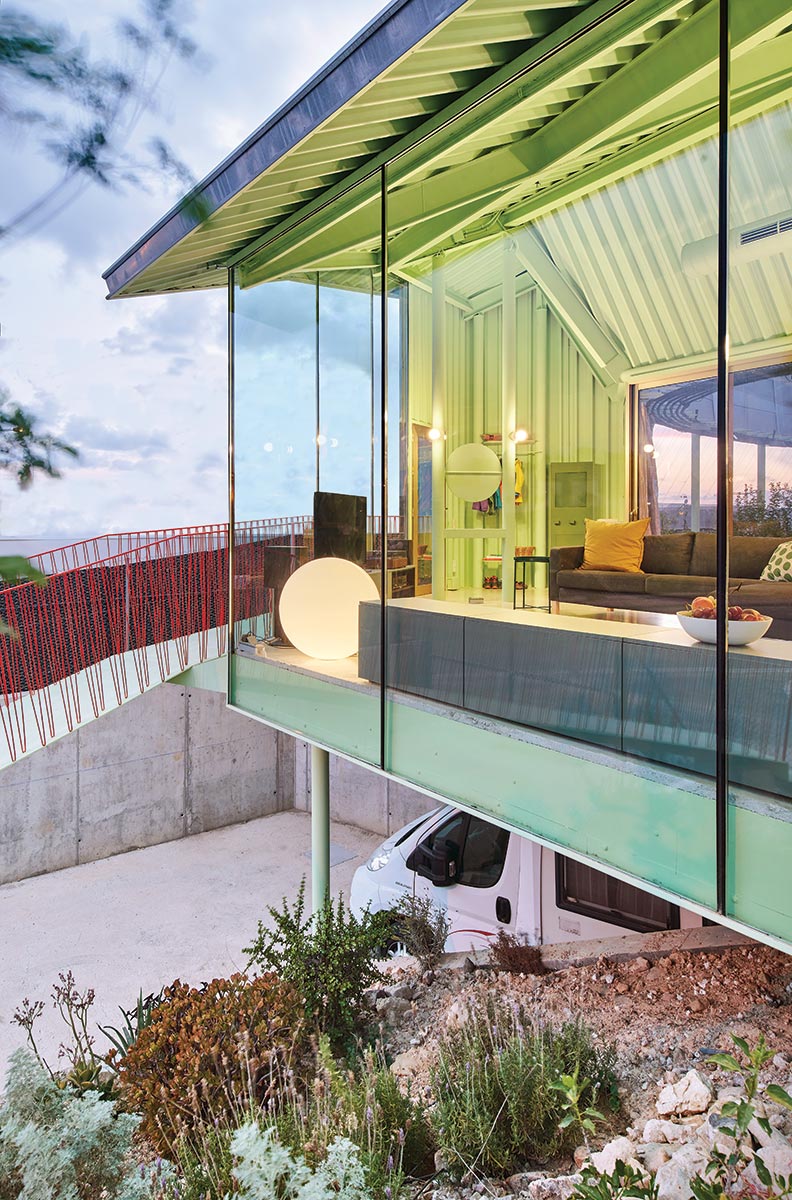 Raised above the garden and carport, (left), the house has an expansive view of the landscape. Photo © José Hevia

Apart from a concrete undercroft for the camper, the 1,500-square-foot house, perched lightly on pilotis, only partly occupies its 6,500-square-foot lot, which takes the form of a small mound: the architects did not flatten the terrain, in contrast to usual practice, but did use excavated soil to help model an artificial fragment of rambla. They then organized the living accommodations around this “natural” garden, tracing an irregular perimeter that encloses a generous void, oval in plan, from which the man-made rambla descends under the back of the house.

Since suburbanization disrupts the natural processes that keep moisture in the deepest layers of subsoil (which is what allows the rambla plants to survive long periods without rainfall), the architects included tanks that collect both rain- and graywater, which is used to irrigate the garden. “A sensor measures soil humidity,” continues Mesa, “and these data, along with weather forecasts, are fed into software that decides when and how much water should be released. It’s really very simple.” When planting the garden, he stresses, only endemic species were used. 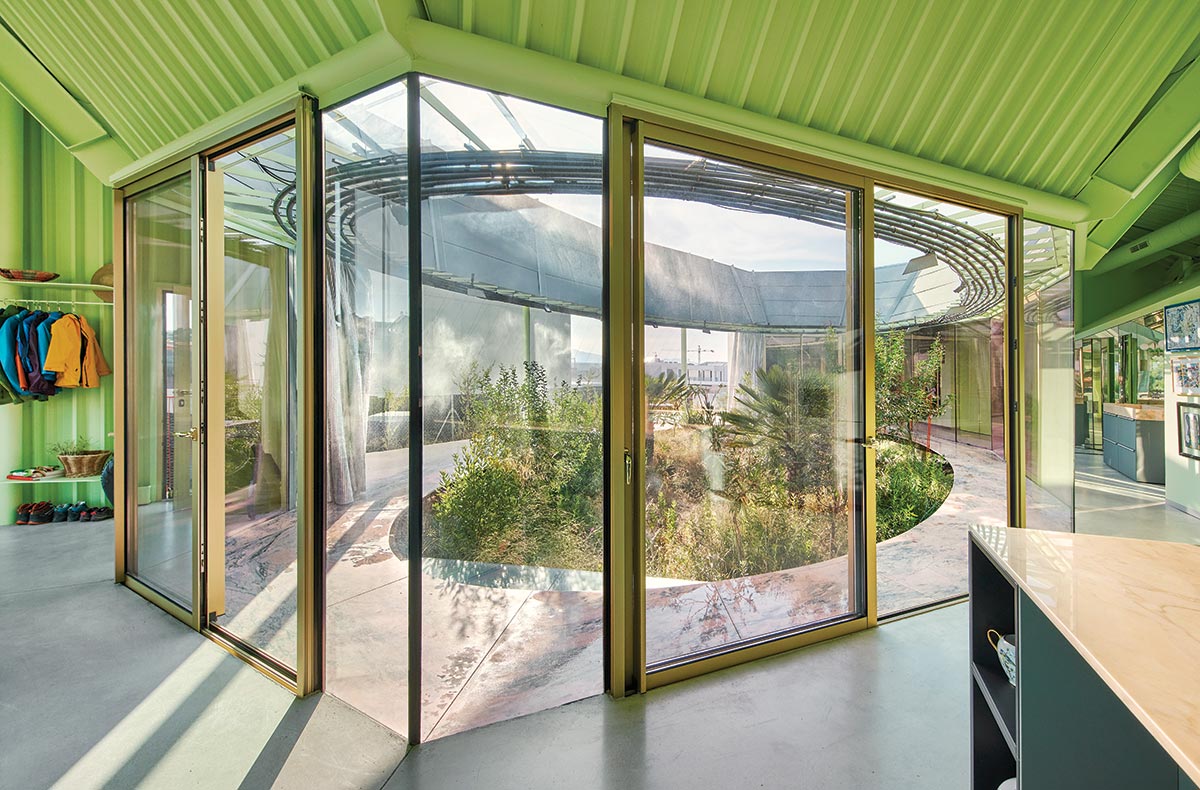 The glass-enclosed, oval garden (1) has a rosy marble ledge at its periphery (2) that allows occupants to have easy access to the outdoors. Photos © José Hevia 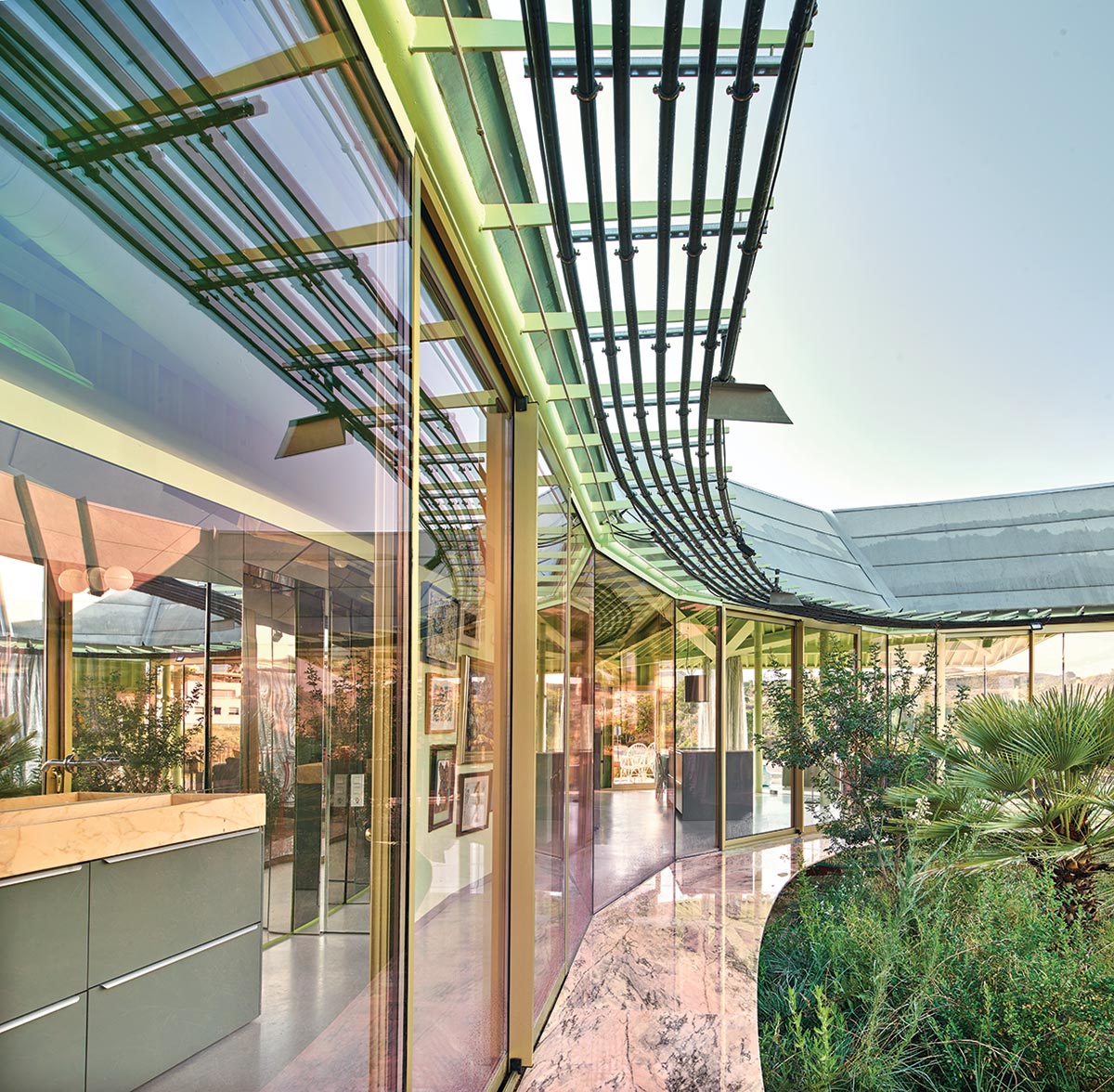 Where the house itself is concerned, a lightweight steel structure rises from the concrete floor slab and is enclosed with either galvanized steel or floor-to-ceiling glass. Economy was the watchword, with construction coming in at just $220,800, not including land purchase (neighboring houses are advertised for almost $450,000).

“The house is materially poor but architecturally rich,” says Jaque. Spaces flow into each other and up to the pleated eaves, giving “a very simple house a sense of luxury achieved with light, volume, and air,” as Mesa puts it. Where necessary, the glazing is fitted with inexpensive reflective silver curtains of the type used in agricultural greenhouses.

If this, and the house’s assembly as an ad hoc selection of low-cost parts, recalls the work of Pritzker Prize–winner Lacaton & Vassal, that firm’s aesthetic of austerity is entirely absent here. “I disagree with the moralizing side to austerity,” explains Jaque.

Mint green paint set off by splashes of red, a ring of pink Portuguese marble for the outdoor flooring, and gold-tinted window frames fitted with rose-tinted glass are among the more sugary touches intended to make living here a joy. 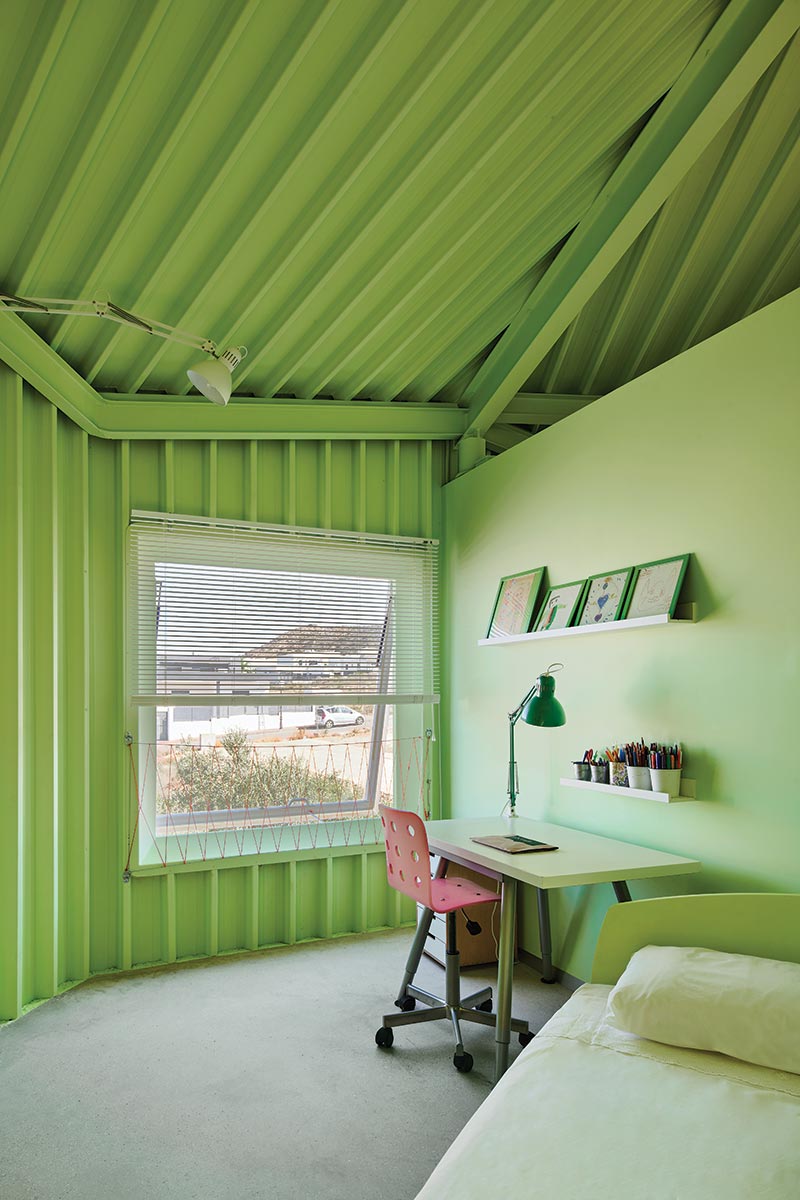 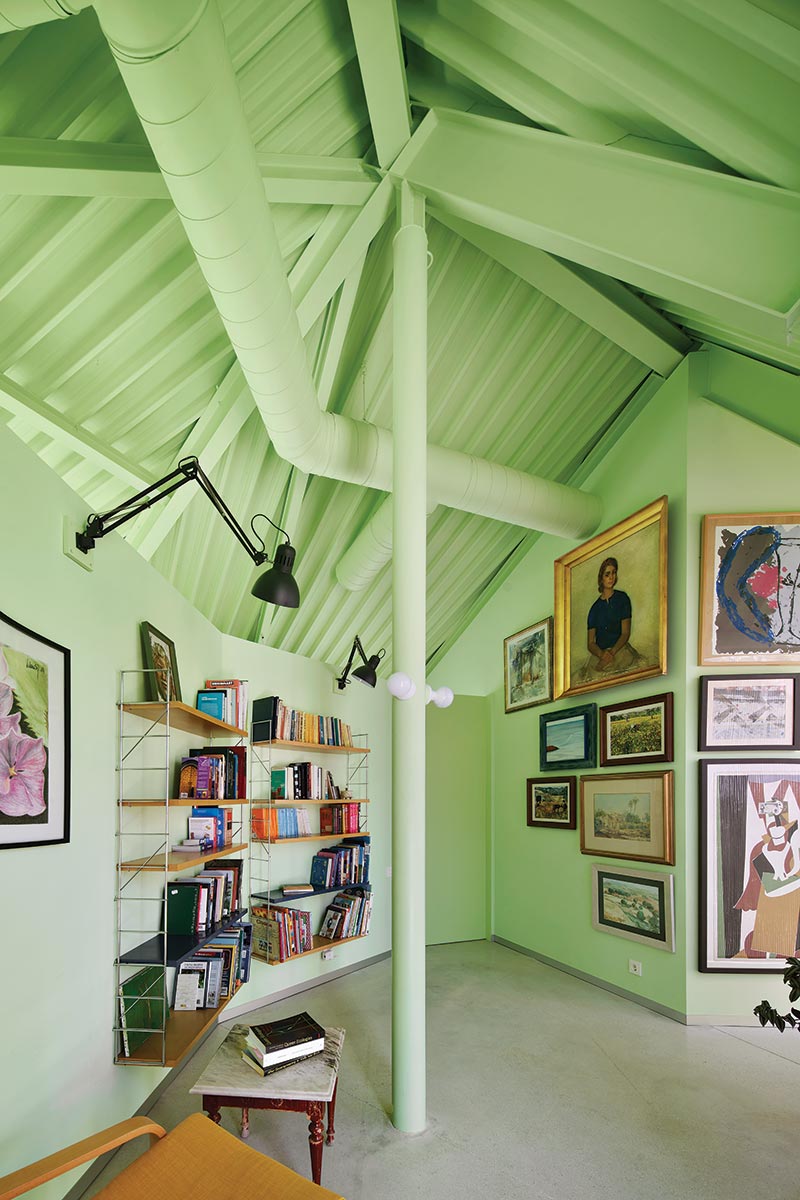 Mint green appears in the bedroom (3) and a sitting area (4). Photos © José Hevia

The detailing is also a joy—the razor-thin entrance ramp with its steel-string balusters, the handling of the bathrooms, with their mirrors and bubble lights, the glass floor plate as you step into the garden that makes explicit the underlying structure—and contributes to the sensation of sunny Case Study House optimism.

“For us, however much we might dislike the other houses here, the style question is not the most important,” says Mesa. “We want to use this project to convince people to stop covering their patios with plastic, to allow the soil to retain moisture so that there’s a network of spaces capable of hosting biodiversity.”

While Jaque admits that “what you obviously need to do is reduce the amount of suburban development,” he feels that this “battle is already lost in Spain, at least for now. The capacity of architects like us to change things in a context like this is very limited. When you look at this cynical suburban development from the air, it appears like a sea of greed and evil. But suddenly there’s this house, a tiny bubble of hope.” 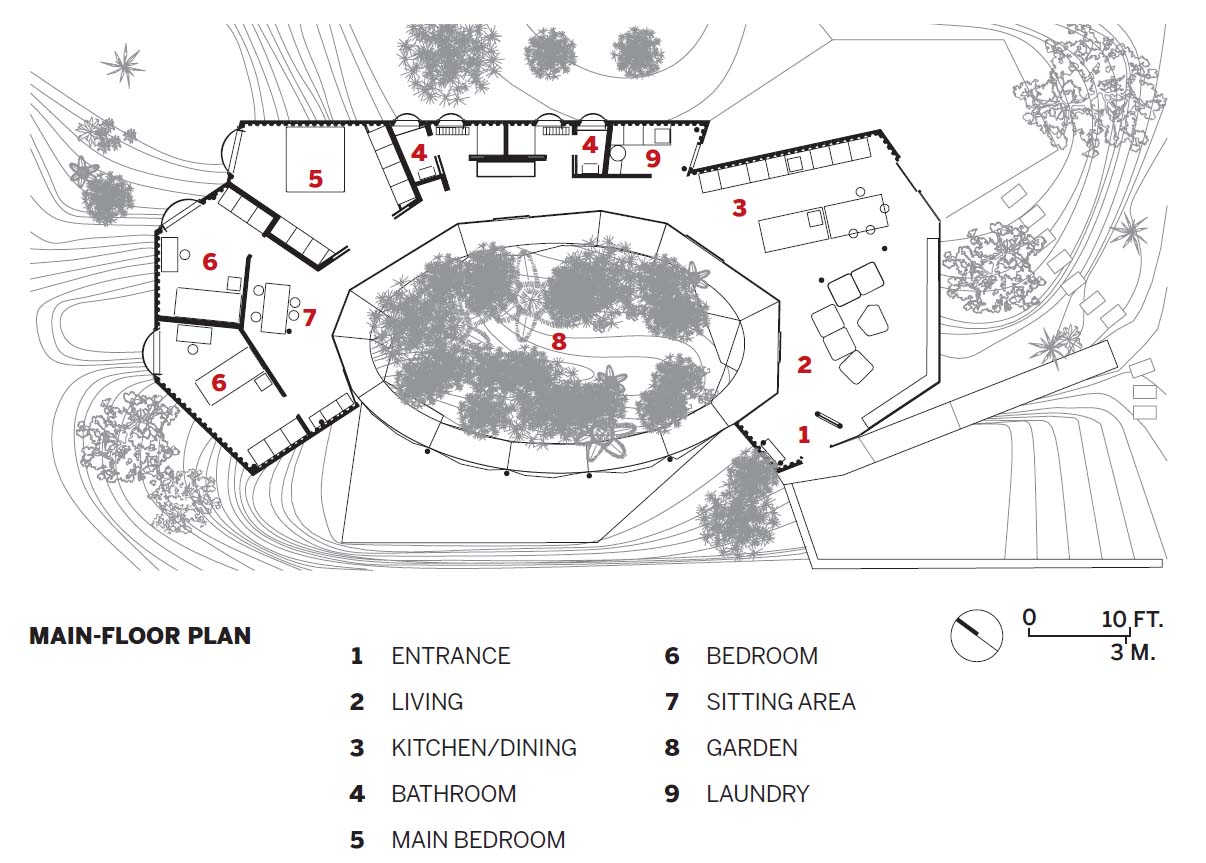