Luring office workers back to downtown high-rises after more than two years of working from home during the Covid pandemic can be challenging. But employers in the revamped Willis (formerly Sears) Tower have a leg up, thanks to a half-billion-dollar makeover by Gensler that upgrades the iconic supertall’s appeal, to tenants and visitors alike, while transforming its relationship to the surrounding streets in Chicago’s Loop.

When completed in 1974, the tower, at a height of 1,450 feet and 110 stories, was the world’s tallest building. It is still the city’s tallest. The Skidmore, Owings & Merrill team responsible for the existing building—architect Bruce Graham and structural engineer Fazlur Kahn—designed it as a nine-square grid of bundled steel tubes, rising to graduated heights from a podium. As a structurally expressive architectonic form punctuating the skyline, it succeeded handsomely. But as an urban place-maker, it was a modernist failure—a geometric abstraction disconnected from the city, described by former Chicago Tribune architecture critic Blair Kamin as “a dud at street level.”

The problem was the podium, which enclosed a full block—bounded by Franklin Street, Adams Street, Wacker Drive, and Jackson Boulevard—in stone-clad walls with minimal openings, relieved only by a stair on Wacker, leading up to a windswept plaza and a second-floor lobby. “It was designed at a time when cities were seen as decaying and crime-ridden,” says Gensler principal Benjy Ward. “It was about keeping people in and the city out.” Subsequent attempts to jazz it up included a barrel-vaulted addition on Wacker, dismissively nicknamed “the lunchbox,” and an overwrought entry pavilion on the plaza, but these were remarkable mostly for their stylistic incompatibility with the tower’s muscular modernist minimalism.

The half century since Willis Tower was designed has seen three big changes. First, the Loop has become a desirable destination, not just for workers, but also for tourists and residents. Second, work habits have changed. Smartphones and laptops allow employees to gravitate from offices into public spaces. Finally, tall commercial buildings are no longer single-use monoliths, intended to do little more than generate workplace-rental revenue. Today, mixed-use programs including retail, restaurants, and other amenities are the norm, and older towers must adapt to compete in a tough real-estate market.

In 2015, EQ Office, a realty company owned by Blackstone, bought the property and hired Gensler, in collaboration with SKB Architects and OLIN, to inject life into the tower and weave it into the urban fabric. The outcome is an enlarged, enlivened glass-clad base of 463,000 square feet, including two new tenant lobbies plus a complex of restaurants and other amenities, anchored by a skylit atrium, named Catalog in homage to Sears (the company responsible for the once ubiquitous mail-order empire). To accommodate this ambitious program, the architects renovated three floors below grade and added three new levels primarily south and west of the tower, topped by a publicly accessible 30,000-square-foot roof garden. 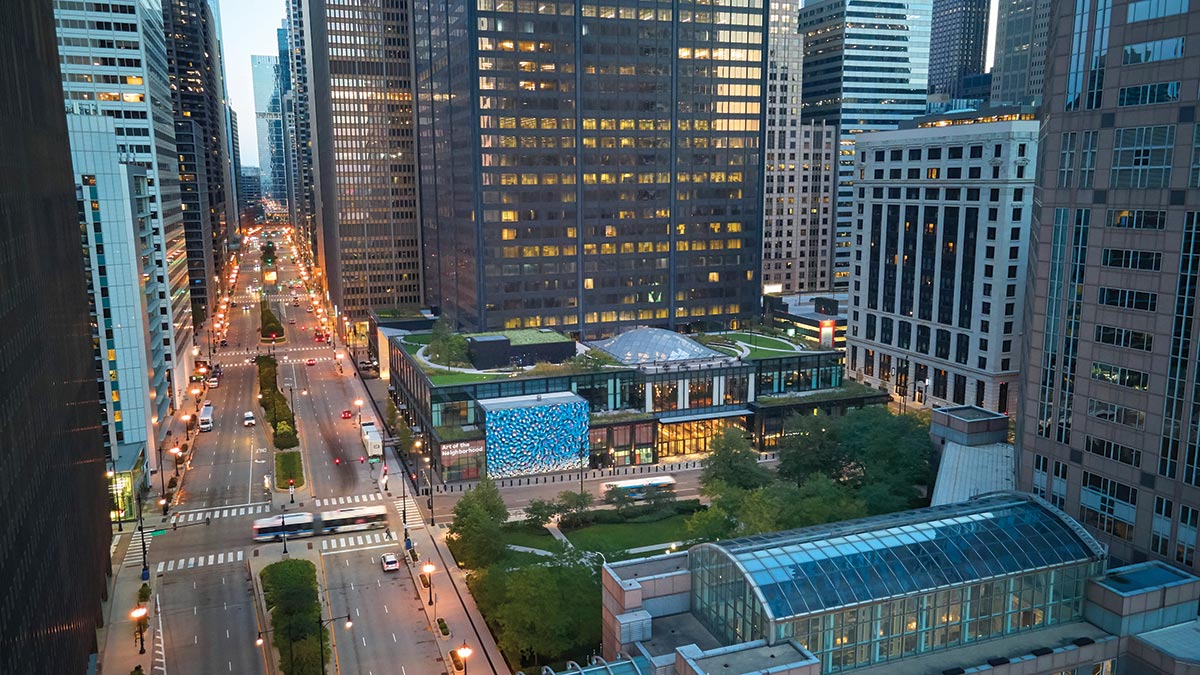 The skylit Catalog is central to the new base (1), wrapping the existing tower (2). Photos © Tom Harris (1), Courtesy EQ Office (2), click to enlarge. 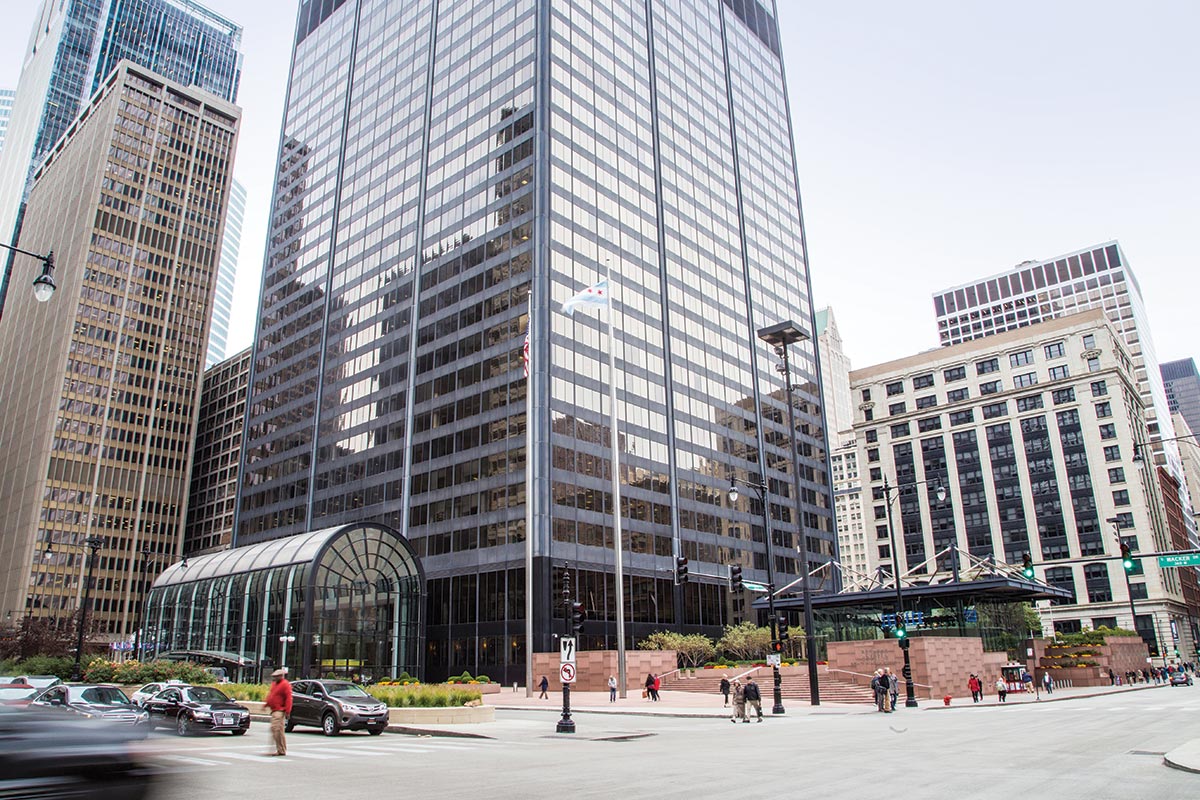 Designing a new base that corrects the shortcomings of a landmark while preserving its strengths required respect and restraint. The resulting scheme “is a mix of materials and forms sympathetic to the original tower,” says Gensler’s architectural design director Michael Townsend. The architects kept the massing simple and established a facade rhythm, crisply articulated in black steel, aluminum, and glazed terra-cotta, that echoes Willis’s structural grid at a more delicate scale. But they eschewed its dark glazing in favor of clear glass to achieve the transparency needed for a welcoming presence on the street, where meticulously detailed entrances and storefronts integrate doorways with canopies and signage.

Skillful spatial layering has transformed the Wacker entrance on the west into a processional sequence of monumental but nonetheless welcoming public rooms. A portal of white-glazed terra-cotta leads to a skylit vestibule, where broad stairs rise between the tower’s massive steel columns to a second-floor lobby of august proportions, overhung by a gigantic paper sculpture and flanked by a reception area to the south plus an elegant public lounge to the north. An adjacent roof terrace overlooking Adams will be open seasonally to a two-story restaurant anchoring the building’s northeast corner. On the first floor, a series of seating areas wraps the elevator banks, connecting with Catalog to the south and another lobby, entered from Franklin, to the east. In contrast to the omnipresent black structural grid, a palette of pale neutrals takes its cues from original travertine-clad walls, which have been restored to a creamy luster. All this expansive architectural grandeur could turn the mundane task of going to and from the office into a sacramental ritual. 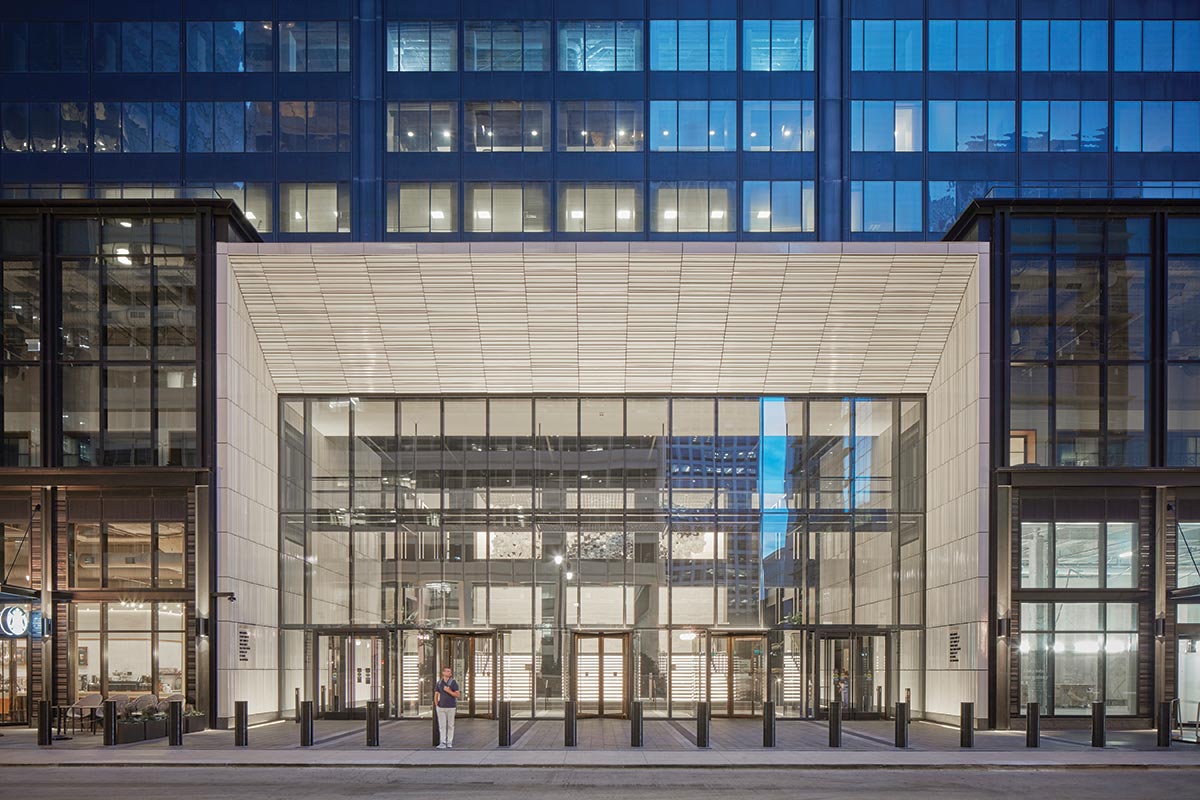 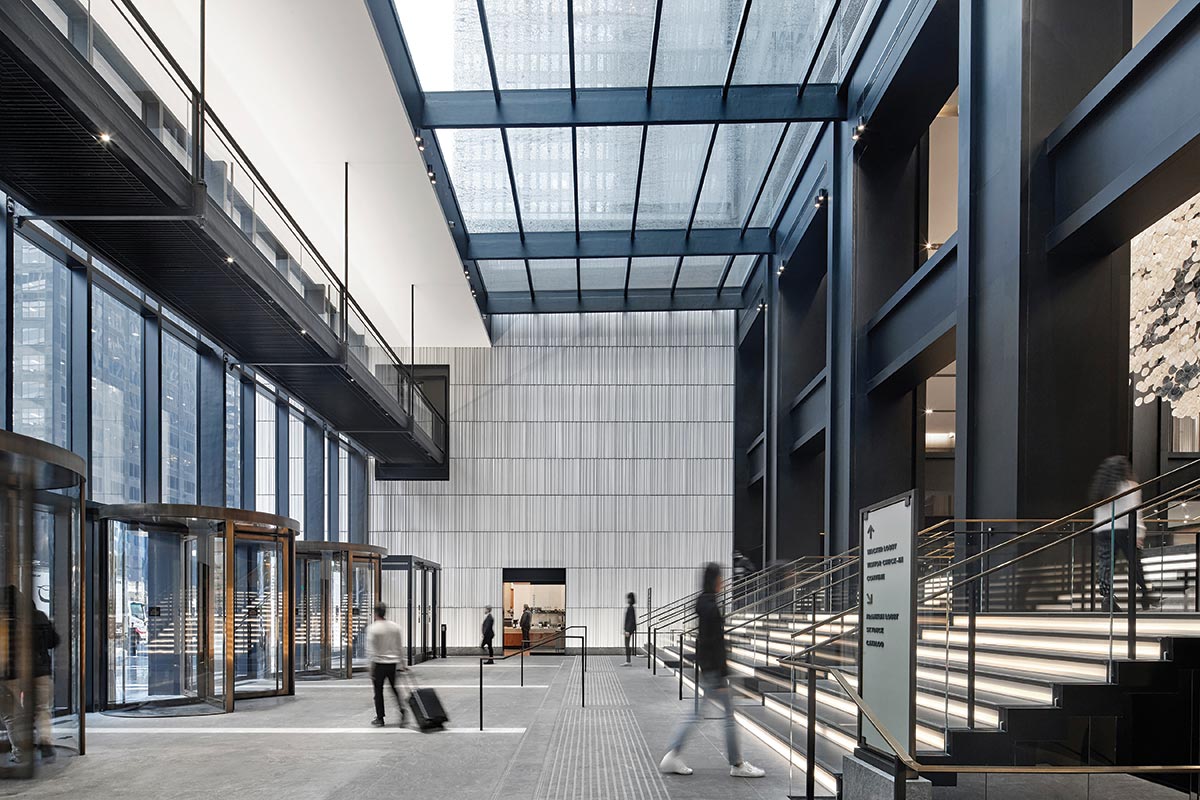 Both the tower and its new base provide amenities that activate Willis for business and social purposes. These include a fitness center, lounges, and bars and cafés for tenants on levels 33, 34, 66 and 67, along with 10 restaurants and 73,000 square feet of event and conference facilities overlooking Catalog’s atrium on levels one, two, and three. The fourth-floor roof garden—with curvilinear paths surrounding native prairie grasses and oak trees, in contrast to the building’s orthogonal geometry—offers the option, when Chicago’s challenging weather permits, of working and lunching alfresco. 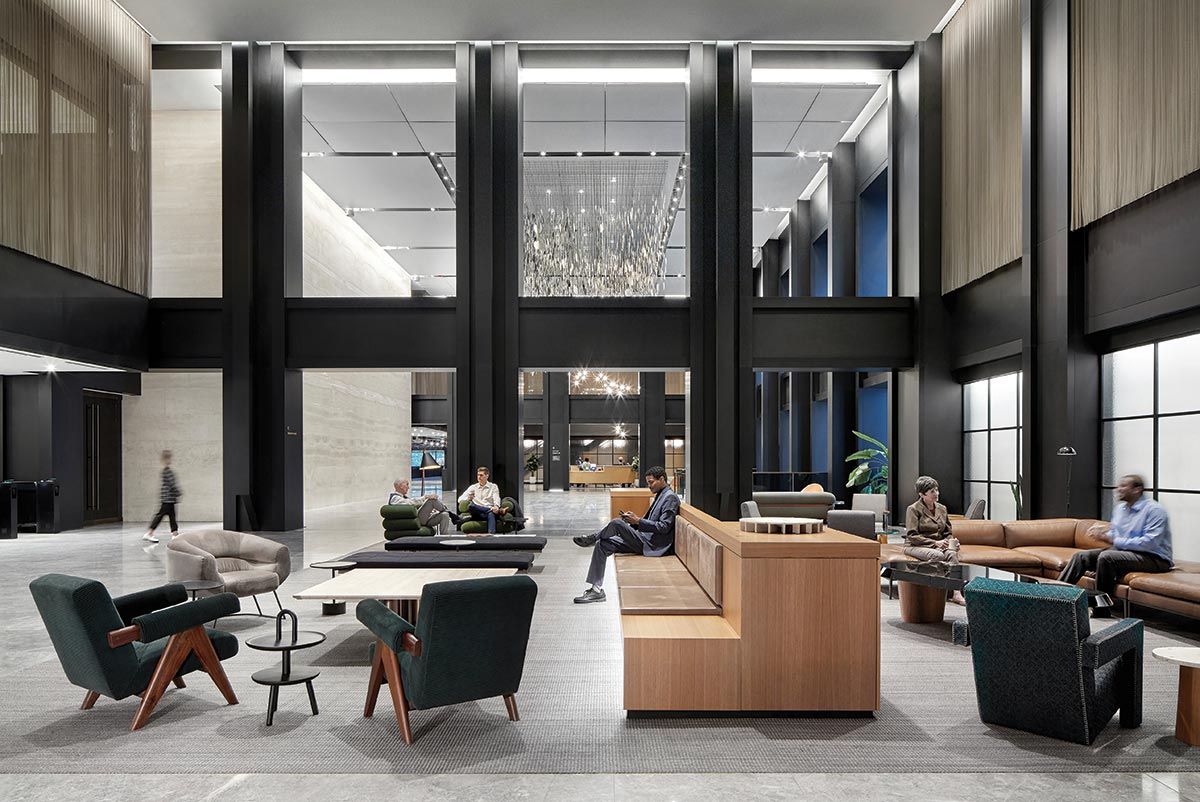 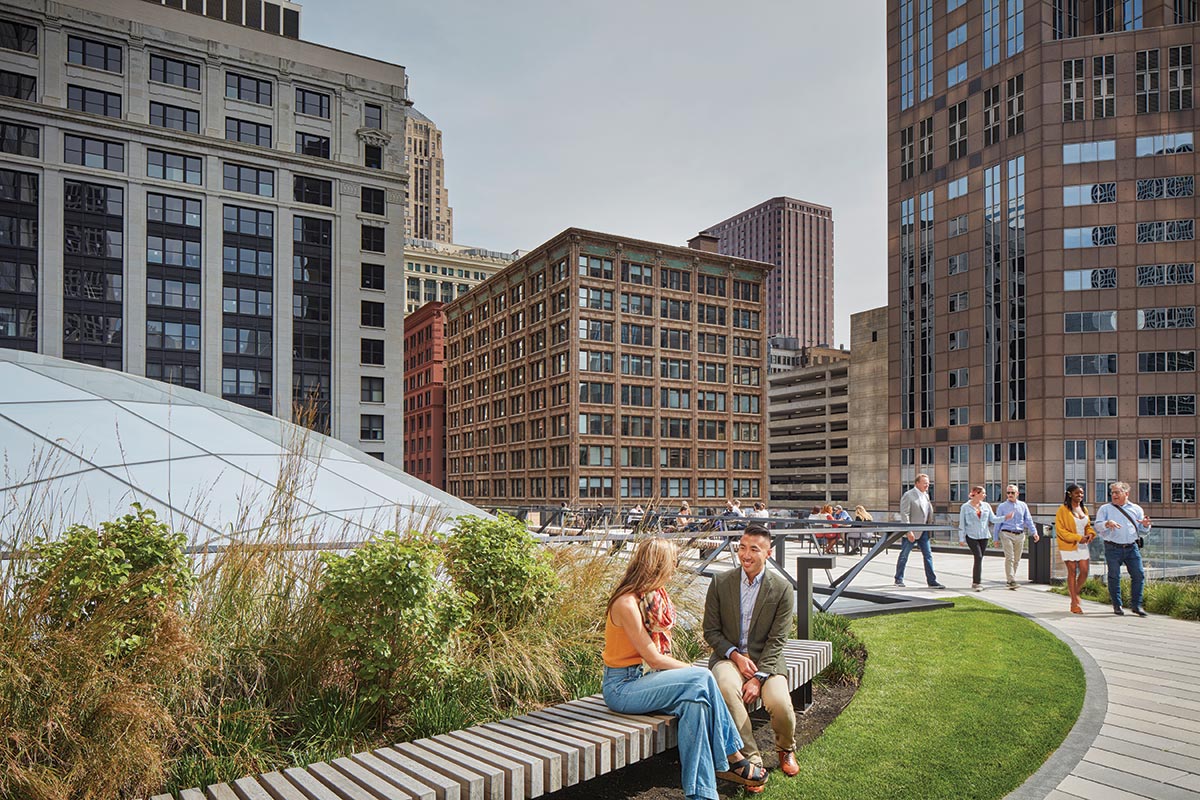 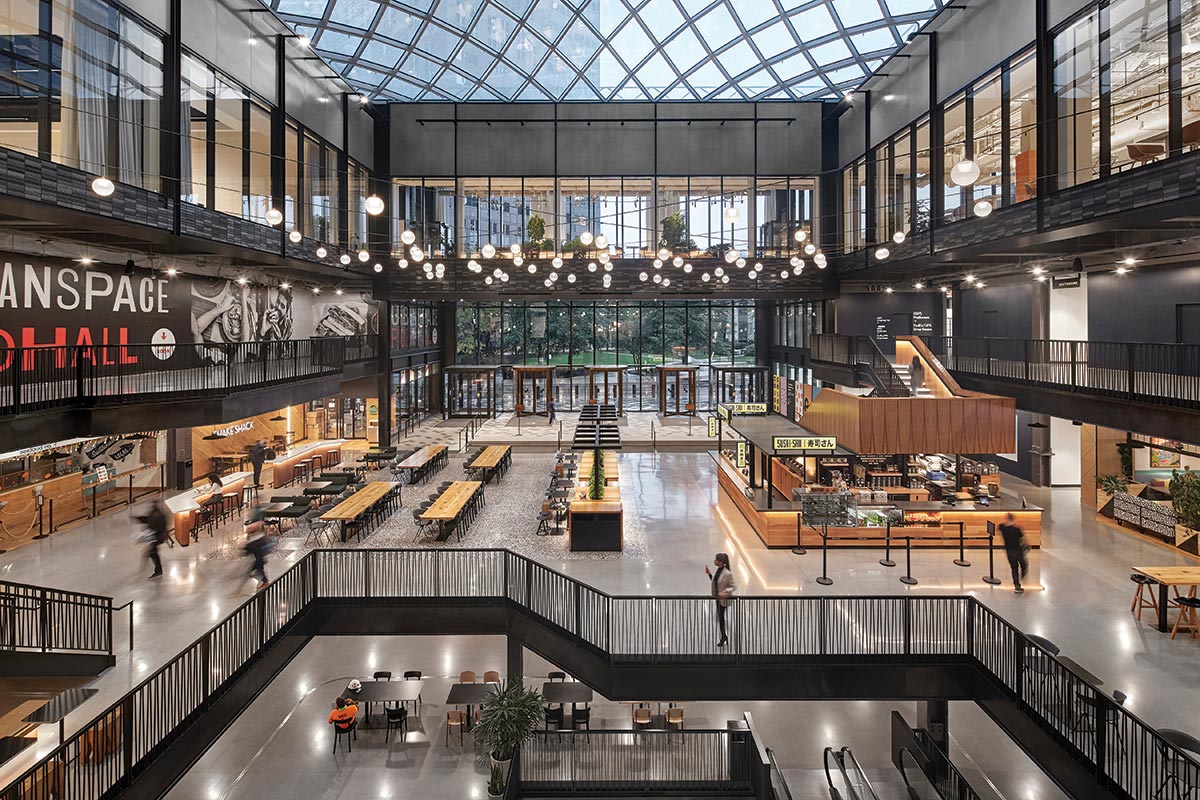 Does the new user-friendly base diminish the tower’s power? A bit, but that’s not a bad thing for architecture that was overpowering. And the makeover is proving to be a crowd-pleaser. “The market response has been incredible,” says David Moore, SVP portfolio director of EQ Office. “The building has seen over 3 million square feet of new leasing activity since the redevelopment began.” Blackstone’s investment is paying off, both for its shareholders and for the quality of Chicago’s streetscape, proving once again that good design is good business. 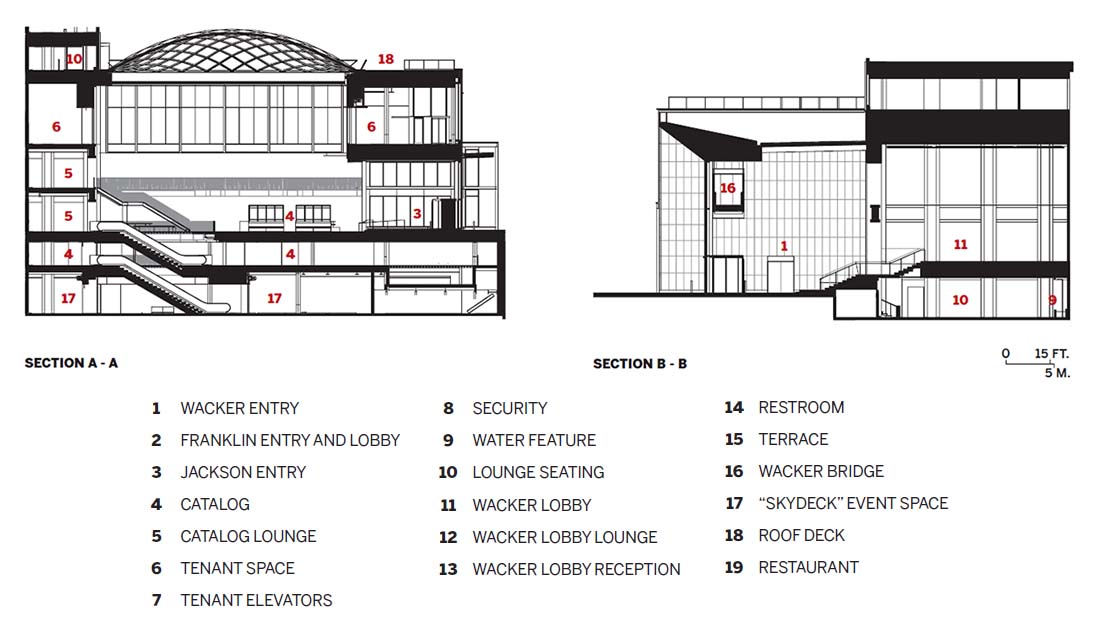