Spelman College broke ground Friday on the Studio Gang-designed Center for Innovation and the Arts, a new academic building that combines STEM and arts programs under a single roof. Located on the southern edge of the school’s Atlanta campus, the center is designed with a variety of public programs on the ground floor that its architects hope will foster connections between the school and the adjacent Westside neighborhood.

In a Friday release, the school announced that the building will be named for college president Mary Schmidt Campbell, who began her tenure in 2015 and will retire this summer.

Spelman, founded in 1881, is the country’s oldest private, historically Black women’s college, and the center will be its first building located just outside a set of walls that have long enclosed the campus. Though having a gated campus has in some ways become “a part of the school’s identity,” said Campbell at a Tuesday event, “it felt almost as if we were being beckoned to open ourselves up and create this welcome into the life of the college.” Students and faculty have built strong connections with the surrounding neighborhoods, she said, and the college works extensively with the Atlanta public schools.

“One of the first things that we did was to research the area around the site, and we found that there’s a budding ecosystem of galleries and storefronts with art,” Studio Gang founding principal Jeanne Gang told RECORD. The new center will add to that vibrance with public exhibition and performance spaces, she says.

The 84,000-square-foot, three-story building incorporates a set of reddish steel sunshades that emerge perpendicular to the façade, framing the building’s structural bays and recalling Southern porches. Their diagrid structure will cast a variety of angled shadows across the façade and through the center’s interiors, lending it a light, contemporary feel appropriate for the school’s first new academic building since 1996.

The sunshades alternately reveal and obscure the façade, providing a measure of privacy for students and faculty at work in the academic spaces on its upper floors. They perhaps also symbolize the complexity of the school’s efforts to open outward: security remains a significant concern for Spelman amid violent threats against historically Black colleges and universities (HBCUs) nationwide, and, Gang says, ensuring the safety of women on campus was a factor in the building’s design. “We’re taking care of that with security inside,” she says, “but still opening up and becoming part of the community.”

The center’s ground floor will be clad in a contextual pale brick and will house a café, art gallery, dance studios, and a black box theater placed around an interior corridor that Gang likens to a public street. Above, the upper floors are organized around two central hubs: an “innovation lab,” a set of maker spaces shared by scientists, engineers, and artists housing a variety of cutting-edge fabrication equipment; and the double-height “forum,” a gathering space designed to foster informal meetings that is lit from above by an angled skylight. 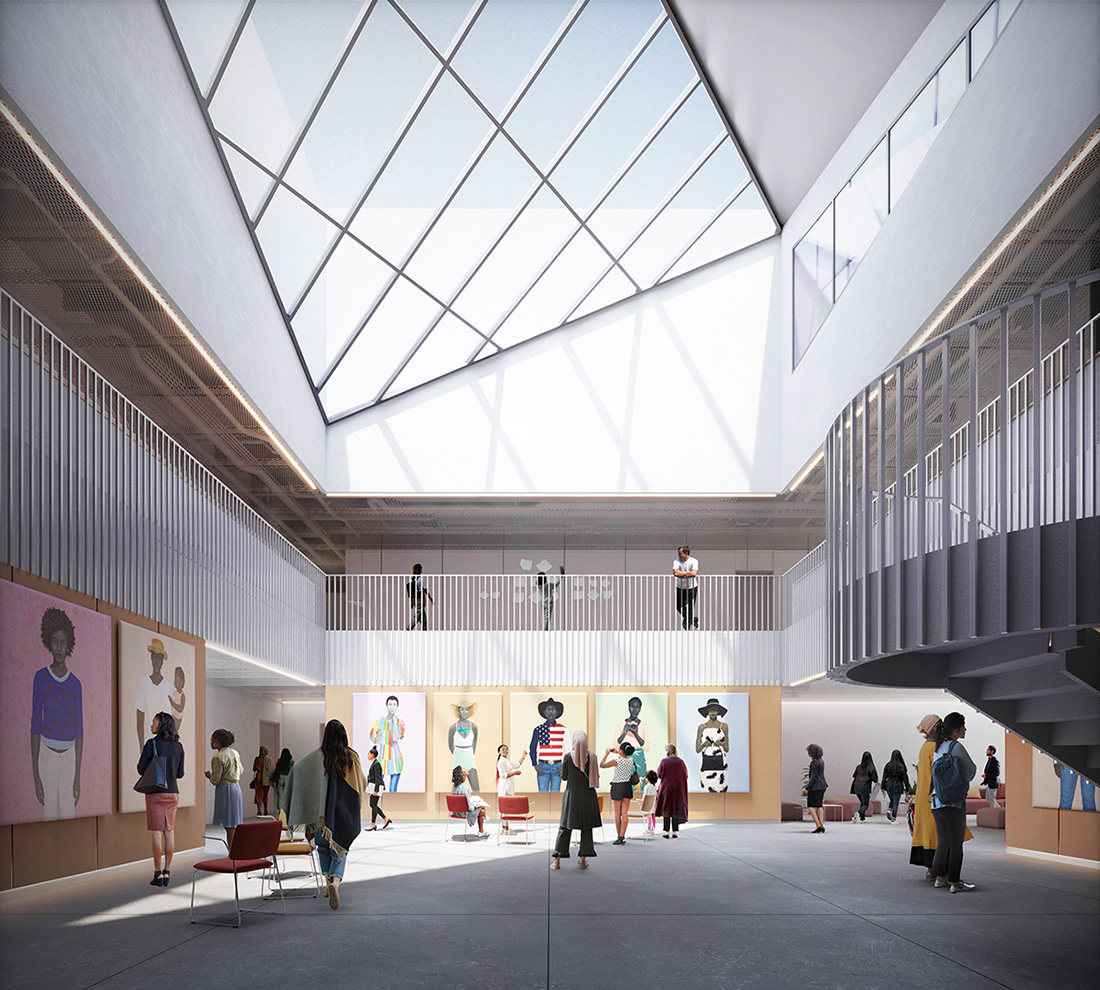 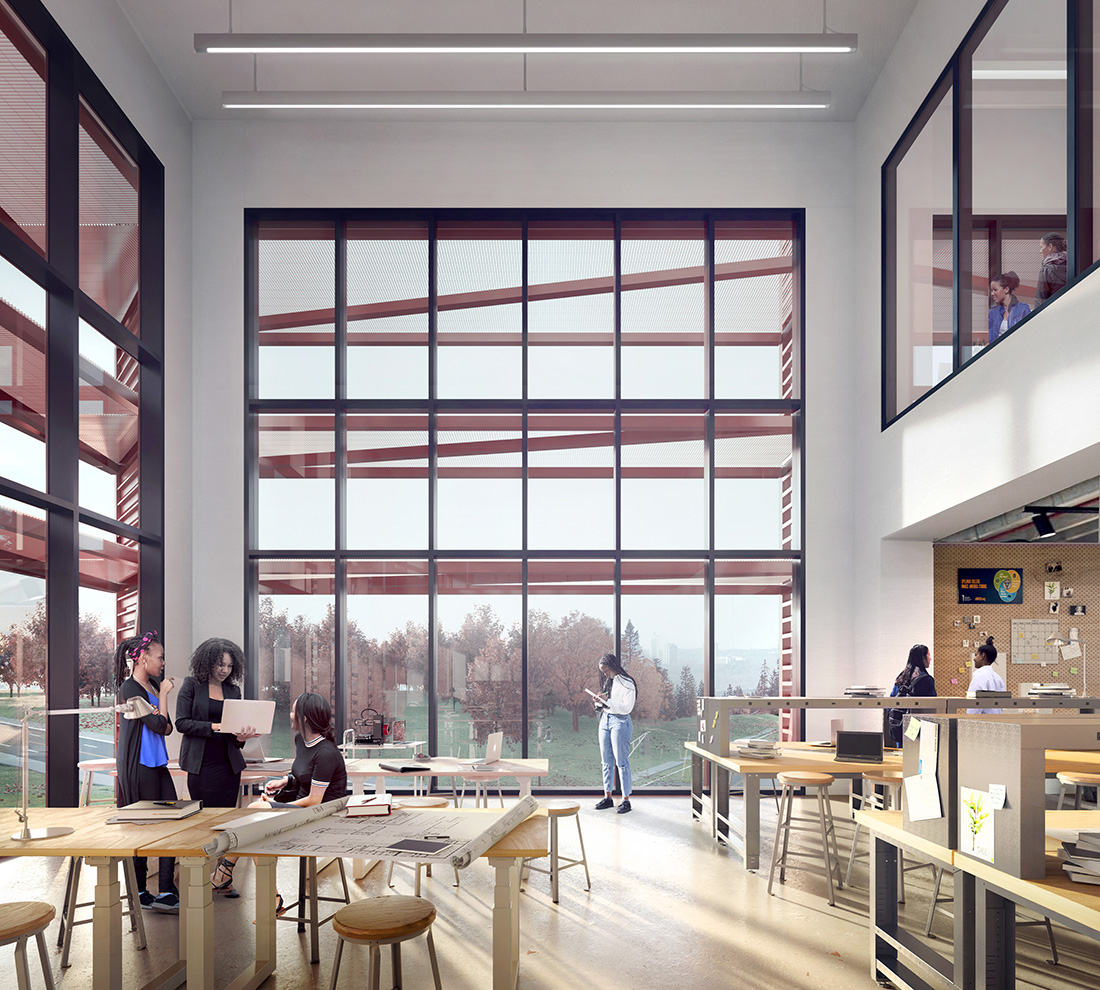 The planned "forum" (1) and "innovation lab" (2) on the second and third floors of the building. Images © Aesthetica Studio, courtesy Studio Gang

The concept for the building emerged from the work of a faculty committee convened in 2016 to envision the future of the arts at Spelman, said Ayoka Chenzira, chair of the college’s arts division, at the Tuesday event. “While the design was process was happening, we were also reimagining the departments,” she said. “We’re hiring new faculty and adding new courses and new programs simultaneously.”

Gang cites the interrelationship between technology and the arts as key to the design. “Women who are majoring in computer science will be right next to dancers, visual artists, and photographers,” she says.

Because the center is located down the slope from a nearby campus gate, its second floor is designed to accommodate a future pedestrian bridge offering direct access between the gated campus and the non-public section of the building. A shaded outdoor terrace will be located above the innovation lab on the third floor, and an exterior plaza outside the center will provide tree-shaded café seating. SCAPE is serving as landscape architect on the project, and Goode Van Slyke Architecture is associate architect.

The school estimates the total budget of the new building, including an endowment that will support its operations, at $86 million, much of which has already been raised through donations. It's a sizable number for a school of just over 2,000 students, but the college and its architects hope that when the center opens in 2024, it will forge new connections between Spelman and the world beyond—and between long-separated academic departments within the school. At its core, Gang says, the center “is about how to break down those traditional silos and bring everyone together.” 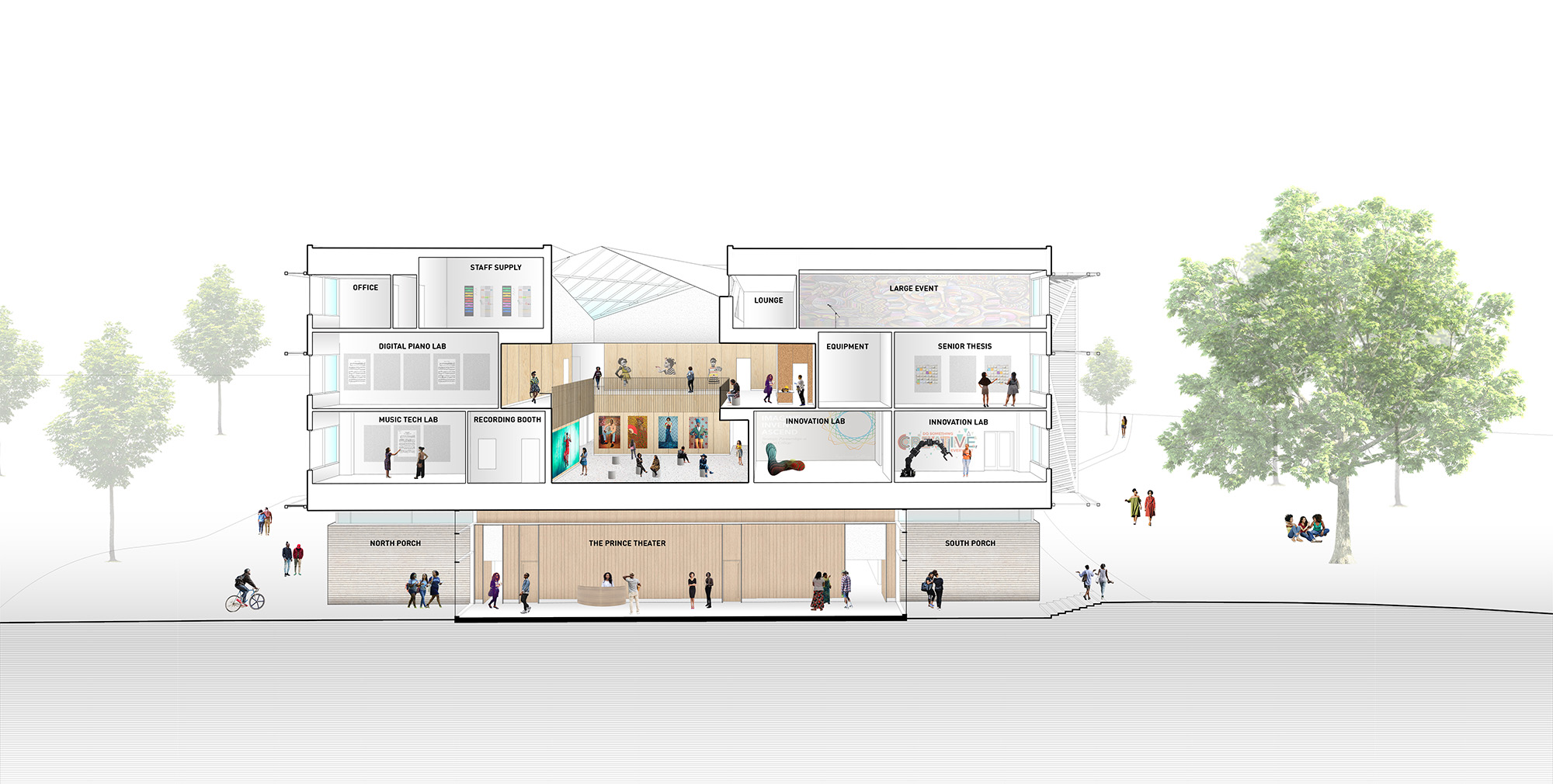 A section diagram of the planned building. Drawing © Studio Gang