Back from the Venice Biennale, the show is a mediation on the most common way we build

The wood-framed pavilion at the center of Wrightwood 659’s "American Framing" exhibition, back stateside after its run at the 2021 Venice Architecture Biennale, fills nearly every inch of the building’s concrete-and-brick triple-height atrium. Like a half-built house with an inverted gable roof, the installation gives visitors a visceral sense of the expandability of balloon framing, which blows up to fill the gallery walls much as wood-framed structures spread across the North American continent. As you peer into the pavilion from the upper floors, you perceive a thicket of two-by-fours that lose tectonic focus and dissolve into an abstract collage. Thin metal strip-ties, bent and twisted with inelegance not often seen in design galleries, remind us that wood framing is often provisional.

This collection of furniture, models, and photos, along with the pavilion itself, makes an earnest show that’s most effective when it revels in the overlooked ubiquity of wood framing and doesn’t try to add new layers of mystification. Curated and designed by University of Illinois at Chicago (UIC) architecture professors Paul Andersen and Paul Preissner, this new iteration of "American Framing" will be on display through July 16. 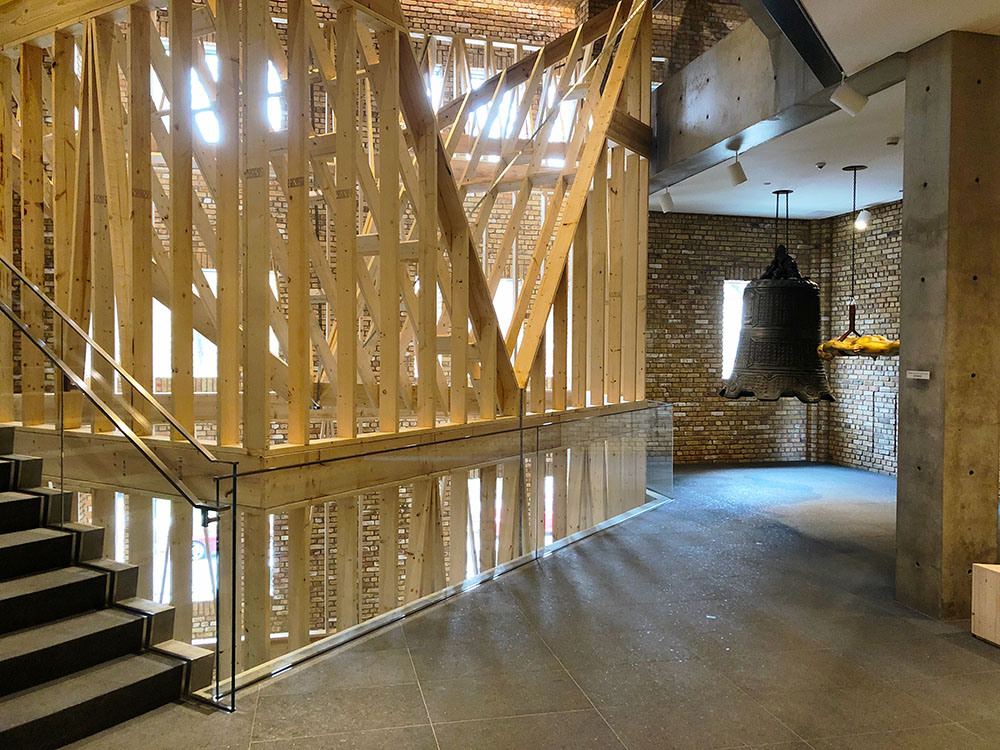 "American Framing" takes the ubiquitous construction method of wood beams nailed together as structural members—used in more than 90 percent of new houses in the United States—as a system worthy of architectural interrogation. The role of Chicago and the American Midwest in developing wood framing is an implicit theme; the technique’s ascendance was a result of a 19th-century system in which vast forests in the Upper Midwest produced lumber that was floated down Lake Michigan to the burgeoning metropolis of Chicago. There, it could be processed and sold across the continent, thanks to the city’s access to the Mississippi River watershed. In the exhibit, Chris Strong’s photos of wood framing laborers highlight the middle portion of the journey from raw commodity to completed architecture. 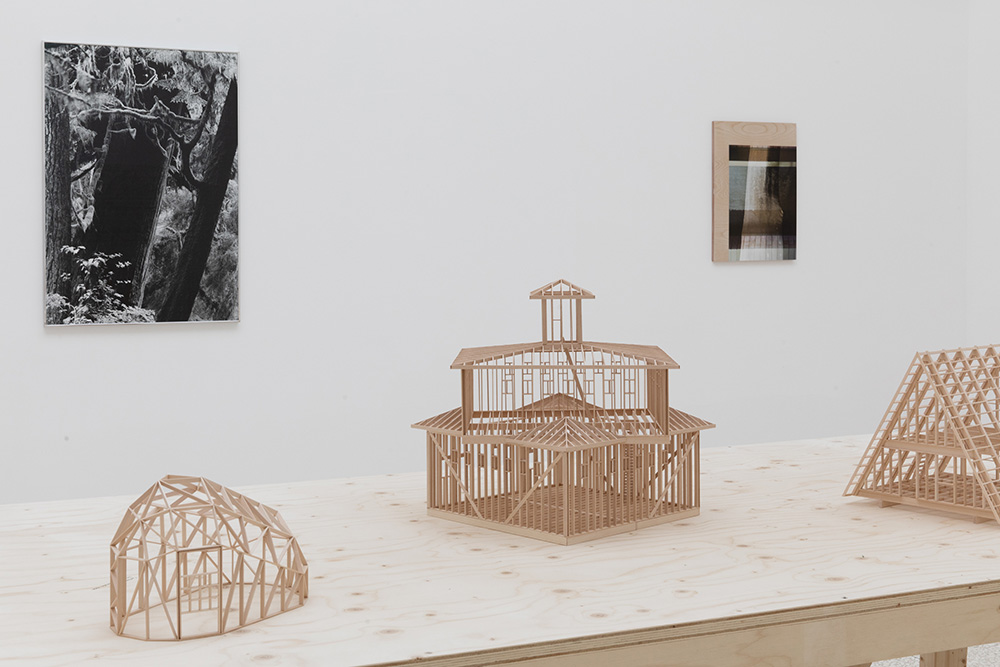 A model of a surveillance tower on display in the exhibition's previous iteration at the Venice Biennale. Courtesy the Pavilion of the U.S. at the 17th International Architecture Exhibition, La Biennale di Venezia

The exhibition presents a way of building that suffers from a lack of architectural prestige for the very same reasons it’s so prevalent: wood framing is flexible, inexpensive, and easy to use. Its DIY approachability means it can be ‘designed’ on the fly by non-experts in need of a physical structure, as when a farmer buys a new drove of hogs. The novelty and technocratic precision of mass timber, by contrast, generates endless fascination among architects. But a comprehensive “history of wood framing doesn’t really exist,” says Andersen. As a result, his students at UIC (who made the models on display in Wrightwood’s galleries, a particular highlight) had to document and pull from primary sources to develop a narrative for the show. An elegant model of a 1905 circular horse barn with a funnel-shaped roof and void at its center makes it clear that wood framing has always been a venue for architectural imagination—whether or not architects realize it.

Most of all, Andersen and Preissner seek to showcase the egalitarianism of wood framing. For a rich client or a poor client, a two-by-four costs the same modest amount, and a house made of them is put together in the same way: the persistence of this system is derived from its ability fit the expanding and contracting American dream. Making use of this “lighter, quicker, and more improvisational” building system is “one way to challenge what is often a fairly elitist position that architecture has in the world,” says Andersen. 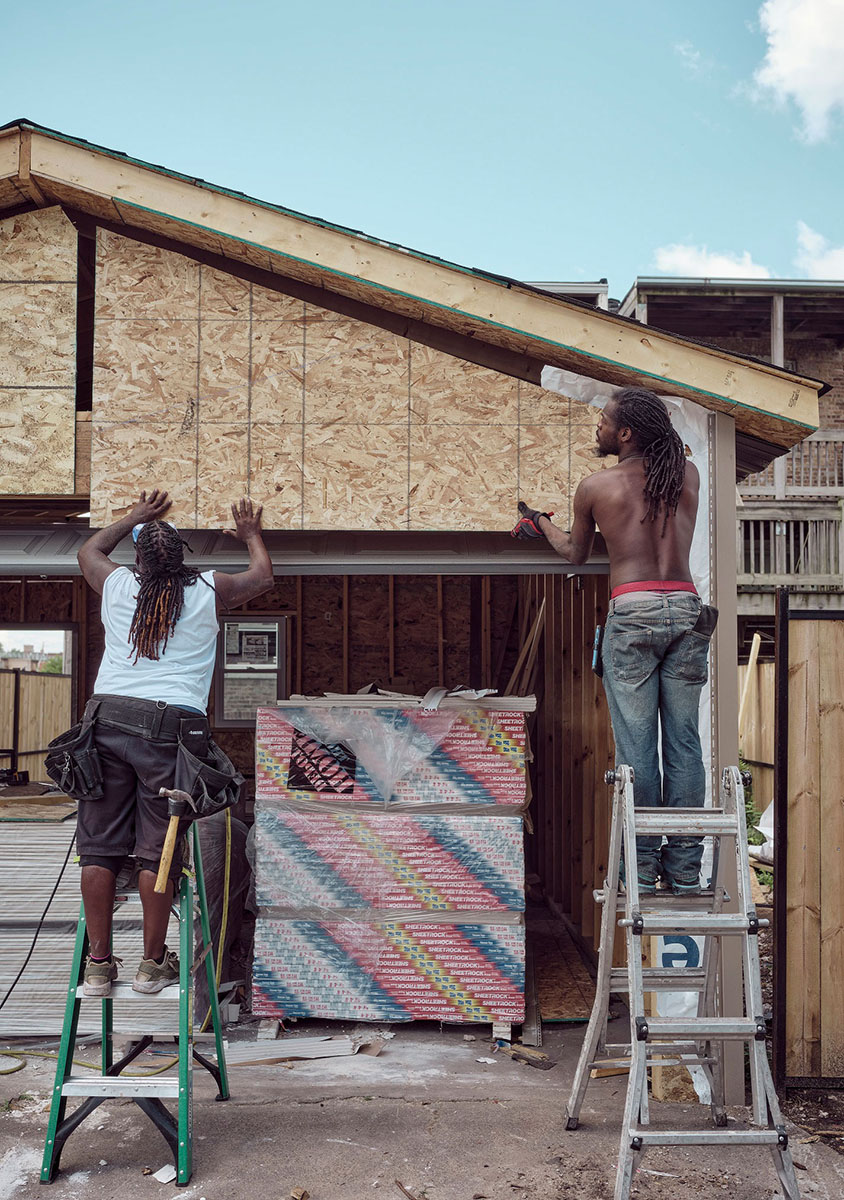 It should be remembered that the exhibition exists in the long shadow of colonial occupation. Throughout the 19th century, wood-framed buildings were an element of the settler infrastructure used to violently displace Indigenous people across North America. For them, a wood-framed house appearing on the horizon meant impending doom, not the ordering of a wild and inhospitable place. At Wrightwood 659, this history receives little more than a passing glance. Strong’s photos show how dramatic inequality shapes the ways in which wood framing is used; we see labor in factories under circulation fans, but also Latinx men awaiting work in a snowy Home Depot parking lot. A concurrent "American Framing" exhibition in Prague tackles the colonial history more directly by including a model of a military roundhouse, a wood-framed surveillance tower deployed in the American West. The American version of the show could have brought the roundhouse home.

There’s little cynicism or anthropological distance between the curators and their subject, and the tone throughout is genially curious. The show’s title and introductory wall text, for example, are literally framed by a wall-and-stud structure. And several of Strong’s photos are celebratory in how they present the folk art of wood framing. In one, a builder blasting board lengths with a nailgun is balanced on a narrow beam, demonstrating physical poise fit for a modern dance class. Conversely, and to the show’s detriment, a series of photos by Daniel Shea breaks the spell of plainspoken enthusiasm. These offer to “collectively destabilize expectations about American culture through meditations on its origin myths,” as the wall text puts it, with gauzy, composite photos that layer wooded scenes with images of construction sites centered on individual objects. There’s no need for this strained search for extra meaning when so much is already there.

"American Framing" is hardly didactic, but it makes an implicit case as for wood framing as a metaphor for America itself. It’s readily expansionist, and well-suited to DIY individualism on a mythic frontier. As such, the show astutely draws parallels between wood framing and the place that spawned it; places and systems that are egalitarian only in the abstract, when they’re divorced from the social context of reality.