“In a way, architects know everything about affordable housing, and very little,” said Benjamin Prosky, executive director of AIA New York, as he kicked off the half-day conference “NYC’s Housing Crisis” held last week at the city’s new Stravros Niarchos Foundation Library. “As a group we want to start where we know best, which is designing our way out of a situation.” Instead, the conference, organized by AIA New York and the Center for Architecture, constituted a pre-design call to action, bringing architects together with the policymakers, activists, and academics who have been grappling with the crisis on the front lines.

The city’s housing crisis, evidenced by record rates of homelessness and evictions and an ever-widening affordability gap, has been festering for years, if not decades. By the end of Michael Bloomberg’s 12-year mayoral reign in 2016, the top 1 percent wealthiest New Yorkers were estimated to be earning an average of 45 times more than the bottom 99 percent. Bill de Blasio entered office with a promise to amend this tale of two cities, and over the course of his term, more than 465,000 units of affordable housing were created across the city. But more than half of New Yorkers remain rent-burdened—spending more than 50 percent of their income on housing—and the rate of homelessness is at an all-time high. Now, at the dawn of a new mayoral administration, Eric Adams has pledged $22 billion toward affordable housing over the next ten years—a number advocates say is still not enough.

But, as New York Times architecture critic Michael Kimmelman noted in an eloquent keynote address, “crisis is an opportunity for change,” a sentiment echoed by other speakers throughout the morning. The event, largely focused on policy and economics, was divided into three panels, the first looking back at the origins and escalation of the crisis, the second at current approaches and their effectiveness, and the third at future models of development.

In the first panel, “The Past: Defining the Crisis,” all three speakers traced the origins of today’s situation back to the 1970s, when a fiscal crisis forged a new kind of public-private partnership. Ingrid Gould Ellen, of NYU’s Furman Center for Real Estate and Urban Policy, noted that housing prices have increased 20-fold since 1974 compared to a 6.5-fold increase in median income. She pointed to the effects of shrinking land availability, federal divestment, and rapidly increasing wealth inequality in New York City, which sees high earners driving up rents and prices. Moses Gates, of the Regional Plan Association, argued that “how we use space is part of the housing crisis,” noting the increase since the 1980s in the number of vacant units in the city—many of them pied-a-terres for non-city residents—and the decrease in rent regulation. 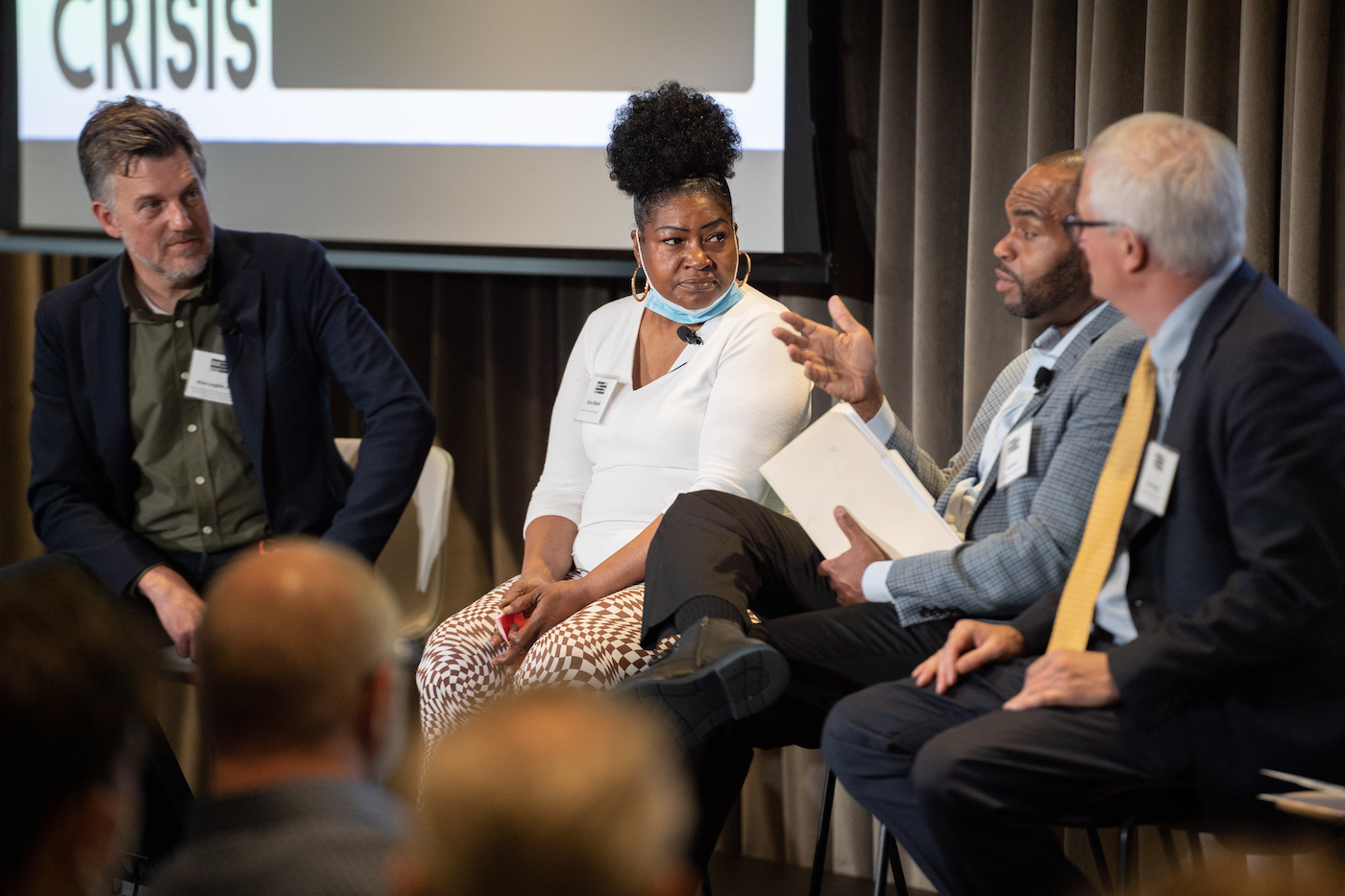 Brian Loughlin, a principal at Magnusson Architects, led the second panel: “The Present: What’s Working? What’s Not?” Loughlin argued that the interests of residents are not represented in the public-private partnerships that have driven urban development in recent years. State Senator Brian Kavanagh pointed to recent positive developments, most notably tenant protection laws passed in 2019 (the strongest in decades), and the state government’s renewed commitment to affordable housing. Jamie Smarr, of nonprofit developer National Housing Partnership, noted that New Yorkers, at the very least, have a good understanding of why affordable housing laws are needed and pointed to the triumph of mandatory inclusionary zoning laws in the city.

An especially compelling voice on the panel was Karen Blondel, founder of the Public Housing Civic Association, who stressed that policymakers need to listen to public housing residents and bring them to the table. She spoke of the physical decay and unsafe living conditions that she and her neighbors at the public Red Hook Houses in Brooklyn have endured over the past four decades. Blondel’s presence kept the panel grounded in reality, as all too often these conferences can wander into hypotheticals and abstraction. 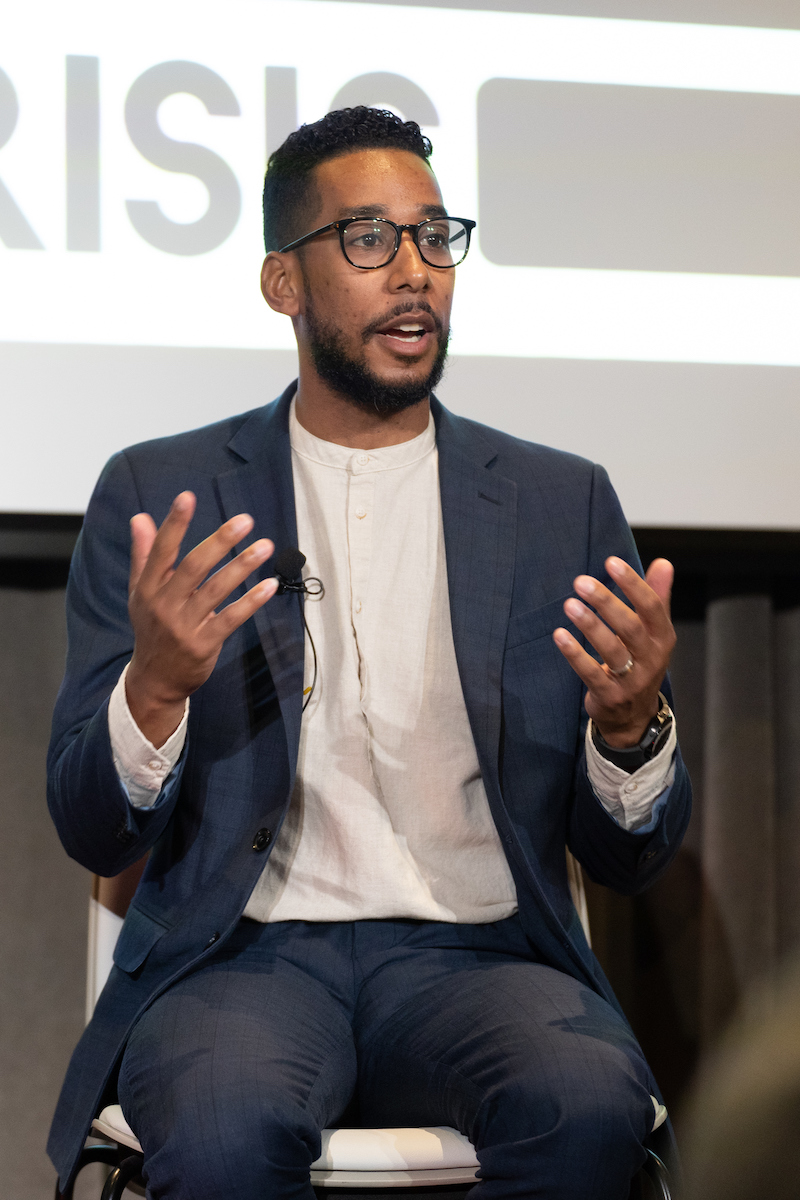 The third panel, “The Future: New Models of Development/New Approaches,” featured Antonio Reynoso, the just-elected Brooklyn borough president, who presented himself as part of a new generation of city officials who are not taking money from real estate. In a brief speech before the panel discussion, he argued against what he called the “YIMBY/NIMBY deaf loop” which stifles development and the production of new housing units. He called for density: “We need height, we need a lot of it,” he said. “Height is the way out.”

Muzzy Rosenblatt, of the nonprofit Bowery Residents' Committee (BRC), spoke about a successful initiative where he convinced the city to subsidize the development and mortgage of a new shelter and low-income housing project in the Bronx. With municipal aid, BRC was able to generate enough profit to subsidize rent for people moving out of the shelter and into permanent housing at the 130-unit project. “We can design and build with dignity,” he argued, “and recapture profit to subsidize more units of housing.”

“NYC’s Housing Crisis'' is the beginning of a larger initiative on the part of the Center for Architecture and AIA New York–Prosky announced in his closing remarks that the NYU Schack Center will publish a report to accompany the effort later this year. Clearly, driving pathways to affordable and sustainable housing for all New Yorkers will take a confluence of policy, activism, and debate, in addition to the support of architects and designers.

RECORD was media sponsor of the event. A video of the conference is available here.