A home is the basis of stability and security, the center of most people’s social, emotional, and even economic lives—a place where residents can live in peace, security, and dignity, according to the UN Special Rapporteur on the human right to adequate housing. Yet over the past decade, climate-fueled catastrophes have forced some 20 million people a year from their homes, becoming the primary driver of in-country migration. Low-income households are especially vulnerable, with a disproportionate number poorly housed in areas prone to storms, flooding, pollution, heatwaves, and drought. As RECORD goes to press, disastrous floods in South Africa have destroyed or damaged thousands of homes—many in informal settlements built in low-lying river valleys or on steep, unstable slopes—killing some 500 people and displacing thousands more. These calamities increase the burden on those least able to cope, making access to affordable, resilient housing an essential aspect of climate justice.

Fulfilling the human right to decent housing globally will take some innovation. The need for new housing around the world by the end of this century is predicted at 2 billion, but 2 billion times even modest carbon emissions from each home would amount to a giant step in the wrong direction. Tom Wood­ward, former climate lead in global policy and influence at Reall, an international housing development nonprofit, points to the link between the climate emergency and social justice in housing. “We cannot afford to address only one of these while making the other worse,” he says. 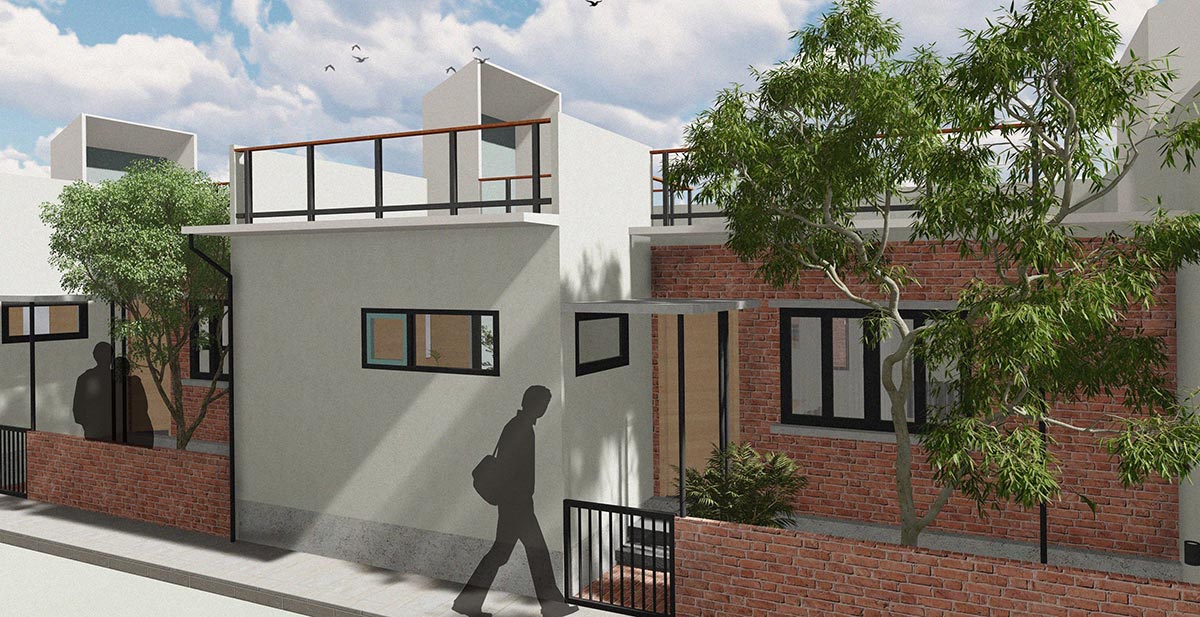 But solutions are emerging, combining materials innovation, off-site fabrication, and low-carbon design to advance equity in housing. In the Global South, where 90 percent of the world’s urban population growth is occurring, an increase of 2.5 billion is expected by 2050. Reall is backing climate-smart, affordable housing projects such as a mass-timber initiative in East Africa, zero-energy homes for disadvantaged families in Pakistan, and utility-scale solar with integrated housing in India and the Philippines, which exemplify key themes of climate justice. And in the Global North, where retrofitting is an imperative, both to increase livability and to reduce emissions, the affordable-housing sector is pioneering low- and high-rise solutions with transformative potential. 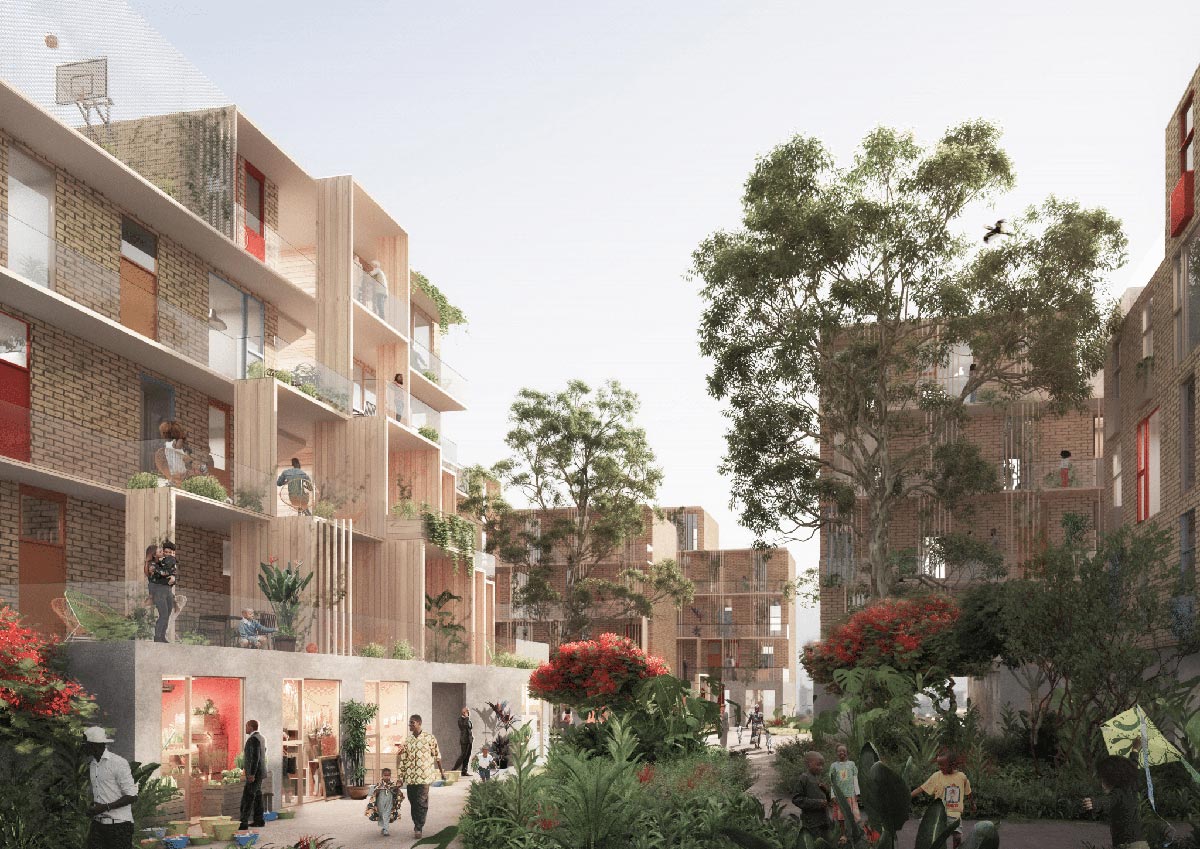 To address housing demand from rapid urbanization without escalating embodied carbon, an initiative aimed at mitigating Kenya’s 2 million-home deficit (with a predicted need for 27 million units of new housing by 2050) is tackling the challenge at industrial scale. Leapfrogging lessons from the Global North, Nairobi-based design-build firm BuildX Studio and its partners are working to establish a sustainable, regional, mass-timber industry. With the goal of offering a zero-carbon, prefabricated housing option by 2030, the concept addresses the full value chain: coordinating a sustainable wood supply from neighboring Uganda; establishing the first cross-laminated timber (CLT) processing facility in Kenya; designing a flat-pack urban-housing system aimed at low- and middle-income brackets; prototyping; working with government to write new regulations; and building public awareness and acceptance of CLT as a replacement for steel and concrete. In addition to providing dignified, low-cost housing, the program has the potential both to transform Kenya’s construction industry and to create a new, high-value market for investments in carbon-sequestering forestry and its products. “BuildX is making a very long play,” says Woodward. “They’re not just thinking about buildings; they’re establishing a national-level supply chain for an affordable, zero-carbon solution that could actually work across the whole country.”

At the scale of low-income households needing secure shelter now, Karachi-based Open Door Design Studio, in collaboration with fabricator and sustainability consultant Modulus Tech, has designed factory-made, zero-energy homes that can be built for $10 per square foot, flat-packed 11 to a truck, and assembled without heavy equipment. Using a light-gauge steel structure, with insulated panel walls and a couple of cladding options, the 664-square-foot, two-bedroom homes (each with 256 square feet of courtyard and landscaped entry) achieve a carbon-footprint reduction of 90 percent, compared to a benchmark building. With average temperatures in the region predicted to exceed 120 degrees Fahrenheit by the end of the century, and air-conditioning both expensive and unreliable, “designing an elegant, climate-resilient home for people on a low income required a return to the basics,” says Currim Suteria, project architect at Open Door. “Building using passive techniques is the only way forward.” The project’s vernacular-derived cooling strategies, including courtyards and wind catchers (designed in collaboration with a doctoral student in wind engineering, Kimberley Adamek, at Western University in London, Ontario), can reduce interior temperatures by as much as 35 degrees Fahrenheit without air-conditioning. In addition to their cooling function, the courtyards admit indirect light, provide spaces for gathering, and offer views to greenery. The development team prioritized ownership by women and by people with disabilities (with mortgages costing about the same as they’d pay in rent in an informal settlement), significantly improving their security and that of their children.

Where BuildX is tackling the issue of affordable, climate-smart housing through the supply chain, and Modulus is working at the building scale, Singapore-based climate tech venture Billion Bricks is tackling the problem with an ingenious paradigm flip. “They’re not building a house and putting a solar panel on the roof,” says Woodward. “They’re building a business plan for a solar farm in a place that has very high solar yield, and they’re integrating housing underneath it.” The housing enables the solar farm to provide a quicker return (from the sale of the homes) and the solar makes the 485- to 880-square-foot homes more affordable by providing an income stream to the homeowner. For example, a 10-kilowatt solar roof can generate as much as four times the energy that the home underneath it needs, a surplus that the homeowner can sell back to the grid or to a local factory. Billion Bricks has completed prototype homes in India and the Philippines, and is now looking to jump to the community scale. “They’ve looked at the problem and said, ‘There’s no way we can make a $10,000 house and yield a profit if we just follow conventional forms of building,’” says Wood­ward. “To address these problems, architects’ expertise needs to go beyond the conventional boundaries of what architecture is.” 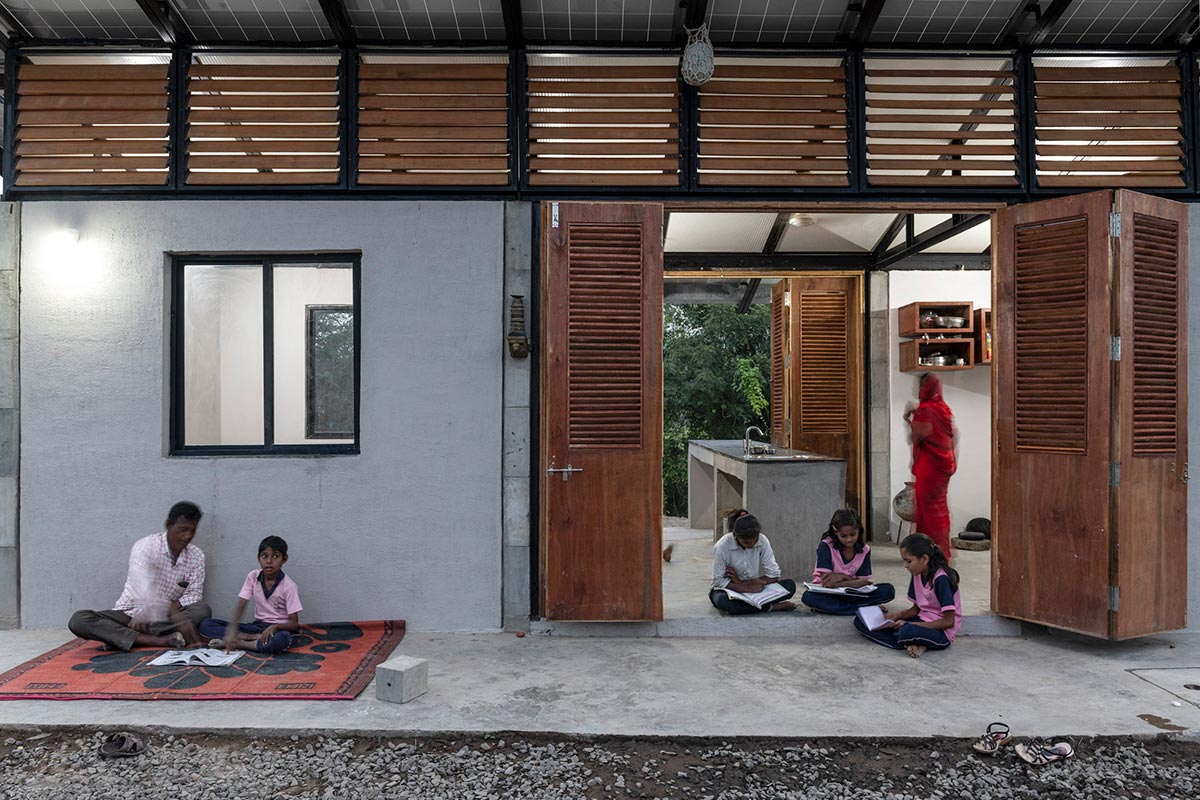 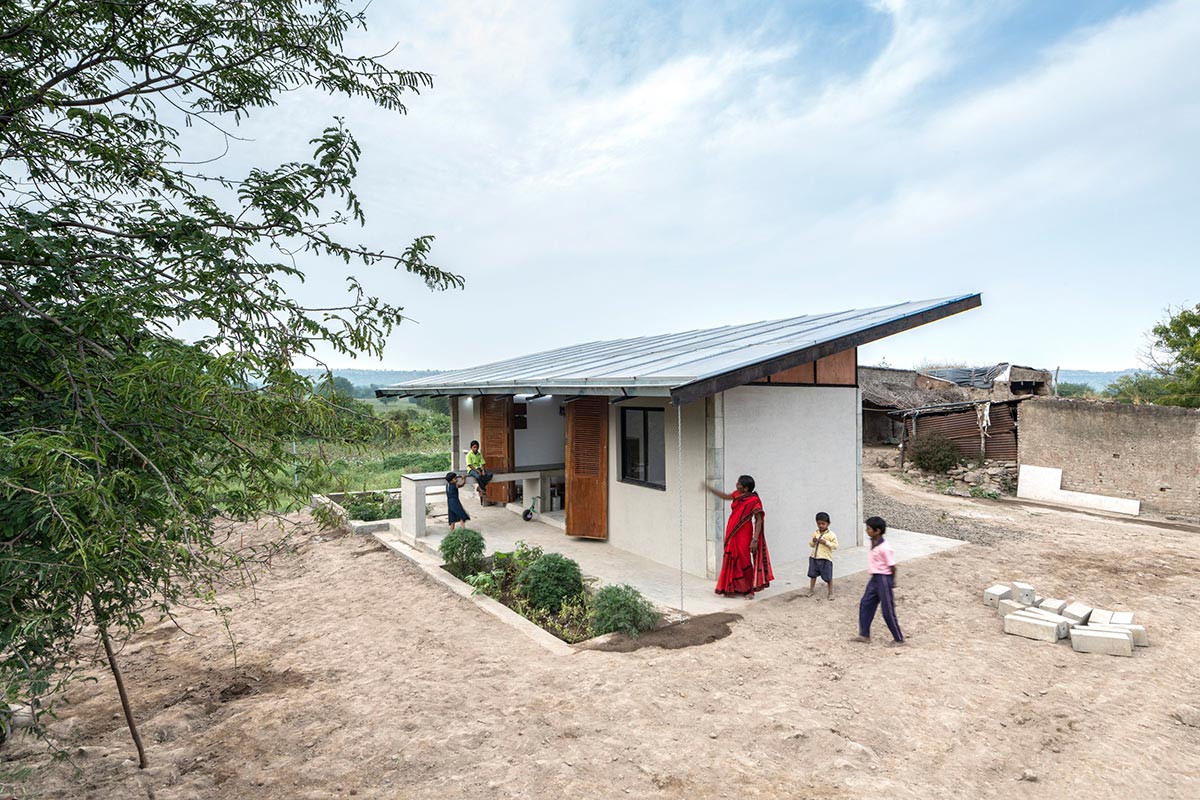 In the Global North, meeting the need for affordable, climate-resilient housing also requires innovation in new construction, but even more crucial is retrofitting. With 80 percent of 2050’s housing stock already standing, decarbonizing it will have a greater impact than low-carbon new builds. What’s more, much of the social housing that was built in the mid-to-late 20th century—now a scarce resource—is starting to fail. Saving and upgrading it can be done for a much lower cost, both in terms of money and embodied carbon, than tearing it down and building new. In addition to improving the climate security and quality of life of low-income residents, retrofitting preserves the valuable social infrastructure that residents have built through their connections to their community.

An innovative, net zero–energy retrofitting strategy now being introduced in North America combines prefabrication and standardization to upgrade building envelopes and systems while allowing the homes to remain in use. Based on the Dutch-developed Energiesprong system, the strategy involves wrapping an existing building in a prefabricated high-performance envelope, and often integrates heating, cooling, ventilation, dehumidification, hot-water heating, and solar panels, to drastically reduce energy consumption. Using full-story prefabricated wall panels, retrofits can be completed in a week or two, or sometimes as little as a day, with no need for residents to move out. “Energiesprong is leapfrogging the incremental approach to energy efficiency that has been the norm and taking existing buildings all the way to fully decarbonized operation,” says Martha Campbell, a principal in the Rocky Mountain Institute’s (RMI’s) Carbon-Free Buildings program. “Their approach is ‘Let’s actually transform the construction sector,’ with business-model innovation to improve sector productivity and economies of scale to bring the cost of these high-performance systems down.” RMI’s REALIZE program has completed over-cladding pilot projects in Massachusetts and California, and a number of examples have also been built under the auspices of New York State’s Energy Research and Development Authority (NYSERDA).

You don’t want to make a building more energy-efficient in a way that’s punitive for residents.
—Graeme Stewart
Principal at ERA Architects, about housing retrofits.

Another over-cladding retrofit (this one not relying on prefabricated panels) is Ken Soble Tower, an 18-story, 146-unit seniors’ housing tower originally built in 1967 in Hamilton, Ontario. The tower is the first residential high-rise in North America to achieve the EnerPHit Certificate (the Passive House standard for retrofits). As a replicable proof of concept, the project serves as a major milestone in the work of saving and upgrading the period’s critical stock of purpose-built rental towers. Achieving a 94 percent reduction in greenhouse-gas emissions on an extremely tight budget, the holistic rehabilitation of the vacant, semi-derelict building included an EIFS (exterior insulation and finish system) rainscreen overcoat and triple-glazed windows, a new HVAC system, and quality-of-life upgrades such as interior refits, improved accessibility, and new indoor and outdoor common areas. The design adopted a comfort-first framework, prioritizing residents’ well-being, safety, and climate resilience, followed by having it require extremely low energy. “You don’t want to make a building more energy-efficient in a way that’s punitive for residents,” says Graeme Stewart, principal at ERA Architects, a firm that specializes in multiunit residential retrofits. (Stewart also heads the Toronto-based Centre for Urban Growth and Renewal, a research nonprofit that recently published A Field Guide to Retrofits in Occupied Buildings.) 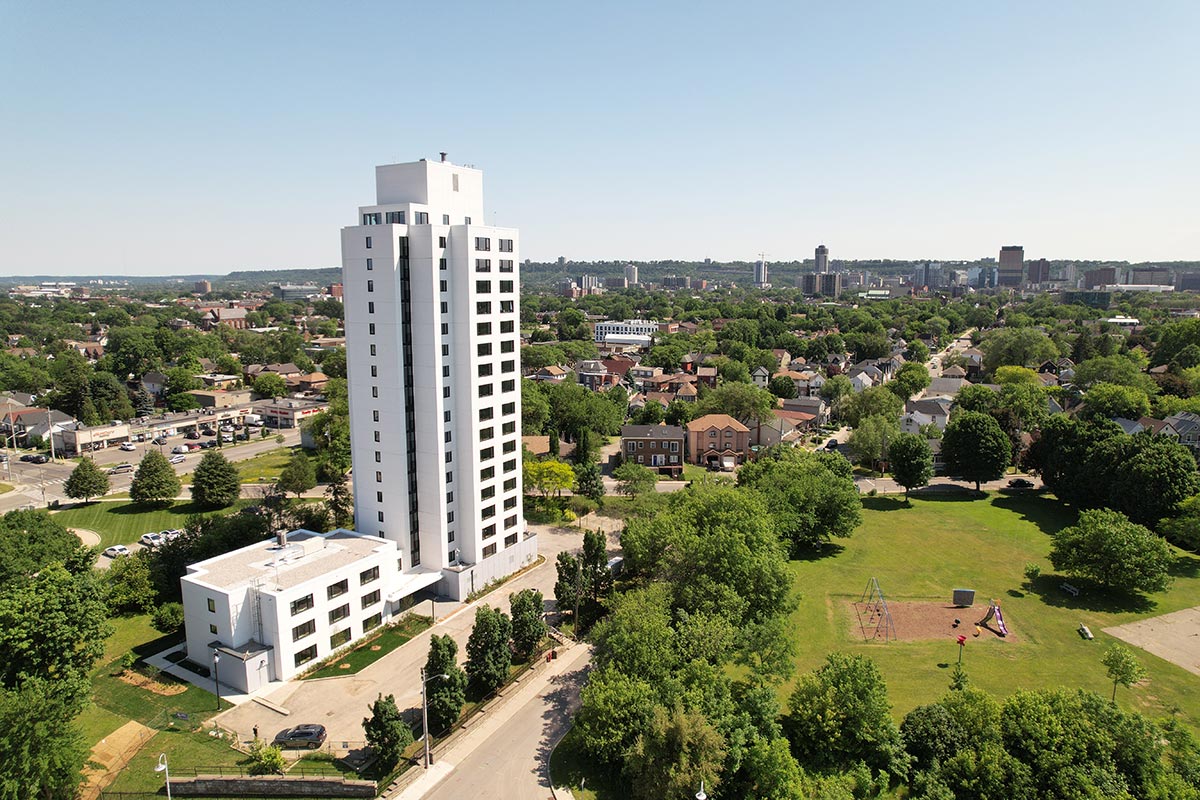 The Ken Soble Tower in Canada has been retrofitted to reduce its greenhouse-gas emissions. Photo © Codrin Talaba

“The pandemic certainly validated the decision to provide direct fresh air,” he says, “and it also raised awareness of the inequality of conditions under which people had to shelter in place.” Completed in 2021, the project is now the focus of a long-term post-occupancy study by the University of Toronto, to measure multiple indicators of health, safety, housing quality, affordability, operational and economic factors, and environmental impacts.

The next challenge facing the developers of replicable prototypes—in North America and in rapidly urbanizing countries globally—is scaling up. Whether retrofitting or building new, the biggest issue, as usual, is funding. “If we’re going to address such a complex and fragmented system, we need more patient capital,” says Woodward, referring to investments that can wait longer than usual for a return. “We need time to accept risks and work through them.” Ultimately, climate-resilient housing for vulnerable people is a larger imperative, says RMI’s Camp­bell, and governments need to commit to it globally: “When you talk to people in defense and national security, climate risk is at the top of the list. With the level of geopolitical instability that it will spark, the volume of climate refugees that we’ll see, we need to stop nickling and diming this.” It’s time to start treating quality, climate-resilient housing as a necessity of life.