This website requires certain cookies to work and uses other cookies to help you have the best experience. By visiting this website, certain cookies have already been set, which you may delete and block. By closing this message or continuing to use our site, you agree to the use of cookies. Visit our updated privacy and cookie policy to learn more.
Home » The Triumphal Arches of Michael Maltzan's Sixth Street Viaduct in L.A.
Architecture NewsCivic ArchitectureTransportation Architecture

Iconic structures that are inseparable from the identities of their cities—such as the Eiffel Tower, the Statue of Liberty, or the St. Louis Arch—“are not just major landmarks,” says architect Michael Maltzan, “they’re also observation points from which we see those metropolises differently.” And, in that spirit, Los Angeles’s new Sixth Street Viaduct—by infrastructure engineers/designers HNTB and Michael Maltzan Architecture (MMA)—is already changing readings of its broader urban setting.

Yet this ambitious work, which opened on July 9, did not break entirely new ground—it replaces an irreparably deteriorating 1932 viaduct that was a key landmark in its own right. That vintage overpass, shaped by the City Beautiful movement and completed in time for LA’s first Olympic Games, was the longest of 14 bridges that connect east and west parts of town across the Los Angeles River. Designed by city engineer Merrill Butler, Sixth Street’s original 3,500-foot-long span was famous for its twin supporting, side-by-side arches—central, recognizable features that appeared, like a giant M, in TV shows, ads, videos, and movies, including Grease, Naked Gun, and the Terminator series. But, throughout the viaduct’s lifetime, the sand in its concrete was producing a degenerative alkali-silica reaction, a “cancer,” that caused constant, severe cracking, making the structure highly vulnerable to seismic failure. The city sought remedies to save the beloved bridge (and successfully revitalized neighboring ones, none with the same malady), but ultimately demolished it in 2016. Ten concrete arches of varying heights loop up and down either side of the viaduct’s 3,500-foot-long roadbed. Photo © Iwan Baan

But, before doing so, government agencies carefully considered its replacement. Initially, the city’s Bureau of Engineering and the California Department of Transportation (Caltrans) suggested a standard utilitarian overpass, but ensuing review processes, many engaging the surrounding communities, demanded more. There were calls to replicate the 1932 design. But, in the end, many citizens and decision-makers saw an opportunity to look not only toward the city’s past, but also its future. In 2012, Los Angeles staged an international competition, which locally based MMA won in collaboration with HNTB. Their scheme took cues from the original design, but carried the ideas much further, in terms of formal expressiveness, function, program, synthesis, and visibility across the metropolis.

The resulting viaduct—connecting the city’s Downtown area and Arts District with the Boyle Heights neighborhood—is lyrical, playful, and memorable. Ten concrete arches of varying heights loop up and down either side of the entire roadbed, its full 3,500 feet (or two-thirds of a mile) length. Each segmented, cast-in-place arch—strung, or “tied,” with a web of tensioned cables—swoops down under the road deck, joining the adjacent arch to form a Y-shaped pier that rests on a seismically engineered base-isolator. The arches on the road’s south side mirror ones of matching height on the north. In homage to the 1932 design, the tallest arcs (which rise 60 feet and span rail tracks) are modified twin peaks—reinterpreting and integrating the original gesture with greater continuity, as the curving, up-and-down rhythms are no longer confined to one section. A 40-foot-tall duo crosses over a freeway, forming a gateway at the structure’s eastern end into Boyle Heights, a predominantly Latino working-class neighborhood, and the remaining arches rise 30 feet. An ingeniously flexible solution, the multiple heights weave deftly among such obstacles as high-voltage powerlines. Dynamic infrastructure—including complex spaghettis of highway interchanges—has long been emblematic of LA. And the viaduct marks its own vital nexus, spanning rail tracks, the I-101 freeway, and the river, with flights into LAX airport crossing directly overhead. But, unlike the 1932 viaduct, this future-oriented roadway is not just car-focused—it’s multimodal, with broad protected outer lanes on either side for pedestrians, and another in each direction for cyclists. The new structure is the same length as its predecessor, but is 100 feet across, whereas the original was only 46 feet wide at its narrowest sections.

The undulant rhythm of arches, stitching loosely across the urban fabric, reinforces the sense of horizontal flow from one end to the other, but the design also introduces strong vertical connections. “To open up the roadway with generosity to the sky,” says Maltzan, the arcs cant outward 9 degrees, a purely expressive gesture. Five stairways, riding the slopes of the arches downward—plus an ADA-compatible and bicycle-friendly helical ramp, 104 feet in diameter—will link the raised roadway with new, much-needed parkland under and around it, replacing gritty industrial zones. (Work on those 12 landscaped acres—designed by Hargreaves Jones and anticipated to take a year and a half—could not begin until the viaduct construction was complete.)

Perhaps, however, the biggest concern about the bridge and the burgeoning development nearby—including the Arts District, which will eventually offer luxury residential, hotel, and office space in buildings by Herzog & de Meuron, Bjarke Ingels Group, and others—is the threat of gentrification, particularly for Boyle Heights. As the community plan continues to undergo updates intended to preserve the neighborhood’s affordability and character, the viaduct recognizes the importance of creating public amenities, access, and a local place of pride across socioeconomic groups.

“Part of the brief was to replace one icon with another,” says Maltzan, “but this was also a chance to create true civic space, not just a means of getting from point A to point B.” Shading the park, the structure’s concrete-ribbed underbelly reveals its own rhythms, like the ridges of a whale or the crossbeams of a basilica. Nicknamed the “Ribbon of Light,” the new viaduct also has a presence across the city, accentuated by subtle but dramatic nighttime illumination of the roadbed, with LEDs embedded low in concrete barriers—instead of visually distracting lampposts—and up-lights that set the arches aglow.

From the slightly curving road deck, the whimsically calligraphic arches play against the downtown skyline, offering shifting vantage points across its gently bowed span. A decade after MMA and HNTB won the commission, the $588 million project opened to a weekend of celebration, with live music by local talent and—in true LA style—a multicultural caravan of food trucks. But, even before Angelenos and visitors could pose for selfies on the viaduct, excitement was beginning to surge, much the way it had when swarms of people congregated to bid the old bridge farewell: all 15,000 free tickets to the Ribbon of Light’s inaugural events got snapped up within three days. 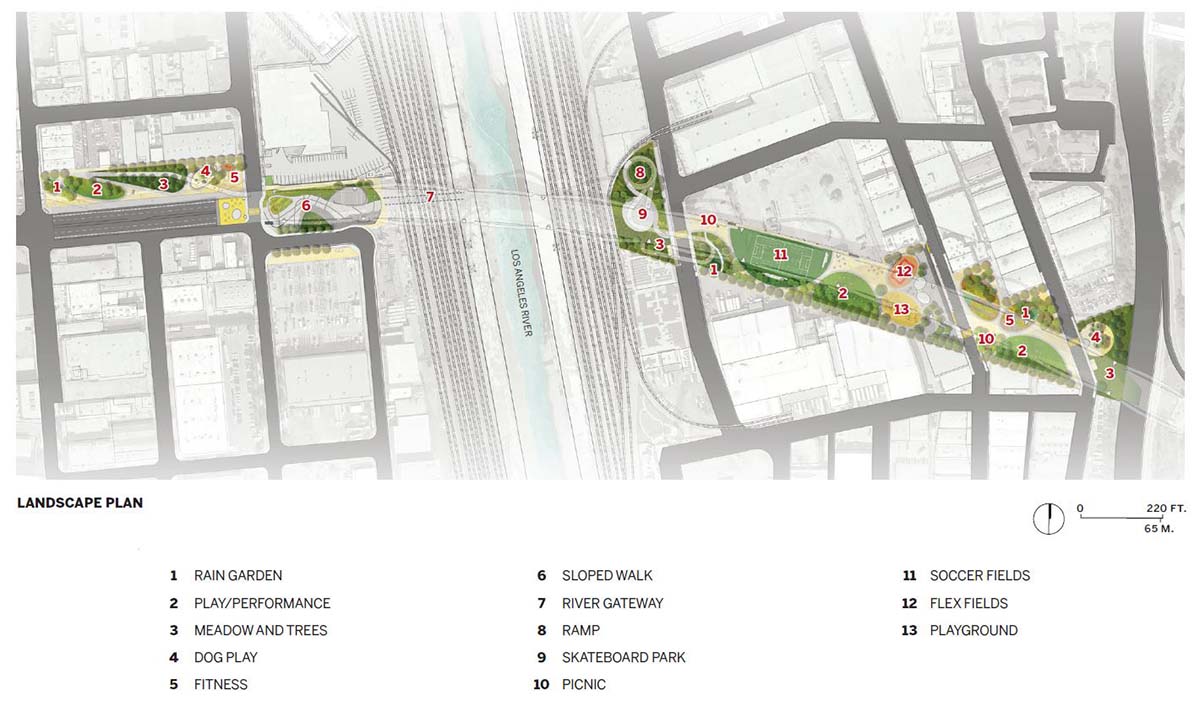