Framed by an outsize safety-orange box truss, a new bridge in Los Angeles connects two neighborhoods while offering cyclists and pedestrians an immersion in the riparian landscape below. Designed by L.A.-based SPF:architects (SPF:a), the 400-foot-long steel-and-concrete Taylor Yard Bridge is one small component of the vast, ongoing effort to revitalize the Los Angeles River (which was lined with concrete in the 1930s to help prevent flooding). Close to downtown L.A. and commissioned by the city, the bridge, which opened in March, links the long-severed neighborhoods of Elysian Heights (or Frogtown), a progressive residential neighborhood, and Cypress Park, a densely populated gentrifying district. On either side of the span, Oakland-based landscape architects Hood Design Studio enhanced this segment of the river with a naturalistic scheme, infusing it with native and drought-tolerant plantings. The bridge, on which the architects collaborated with Arup, civil engineer Tetra Tech, and Ortiz Construction, spans a 10-foot difference in elevation between the two riverbanks; while its deck slopes across the water, the enormous box truss—the structure’s unapologetic calling card—remains level. This strategy has a surprising effect. “From both sides, you see either the bridge getting bigger and bigger, or getting smaller and smaller,” says Zoltan Pali, founding principal of SPF:a. “We thought that was very cinematic.” Composed of 14-inch square tube steel, the truss is braced by stainless-steel tension rods. For seismic reasons, the team employed a redundancy system that repeats critical components in case of failure. And, to limit disruption of the river’s ecosystem, the team built during the dry season and did much of the assembly off-site. Two viewing platforms within the structure, suspended over one of the most lush sections of the riverbed, afford visitors views of the Santa Monica Mountains in the distance. SPF:a staggered these cantilevered outlooks to follow the curve of the snaking water below. 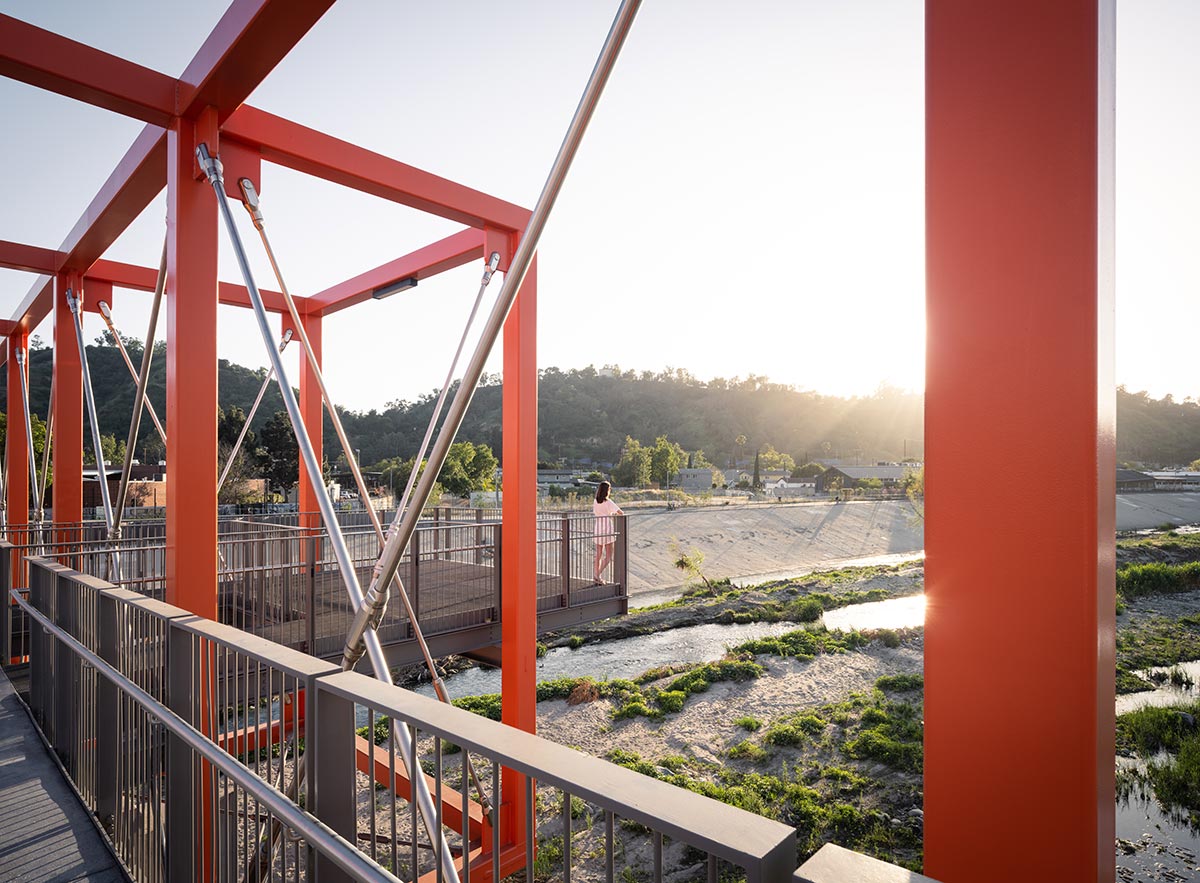 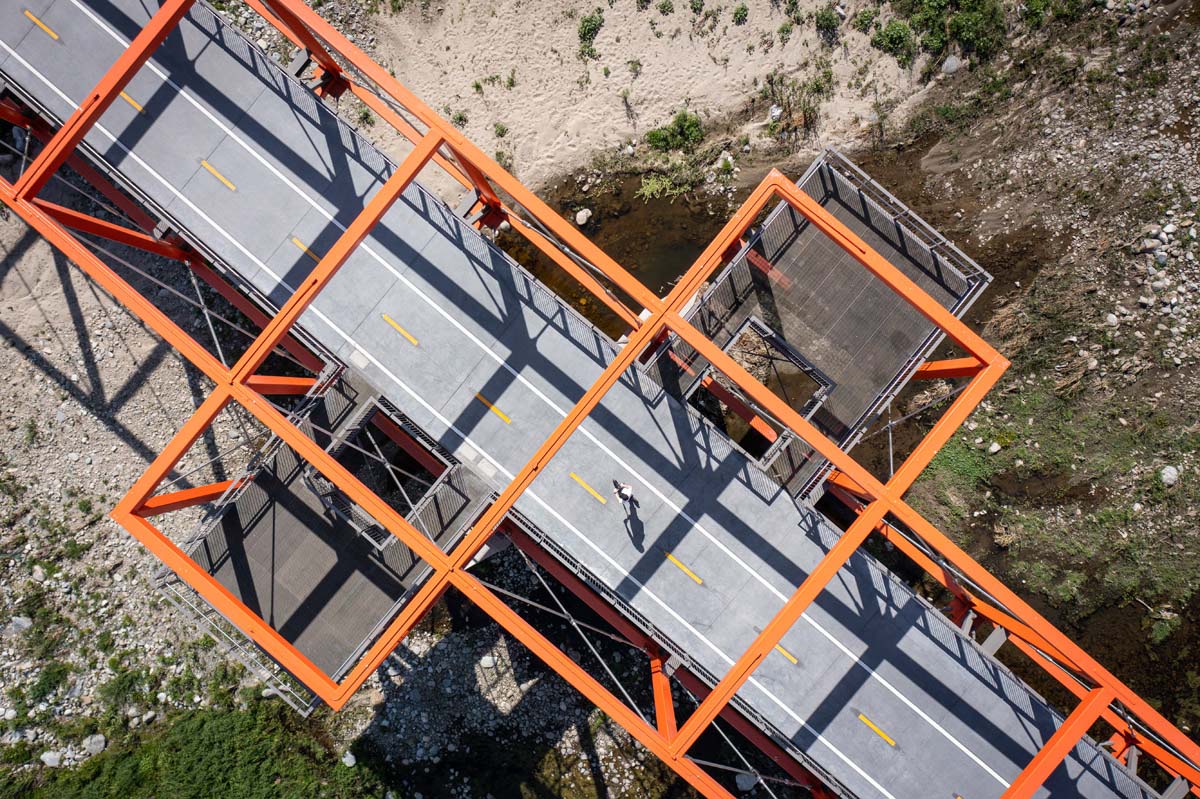 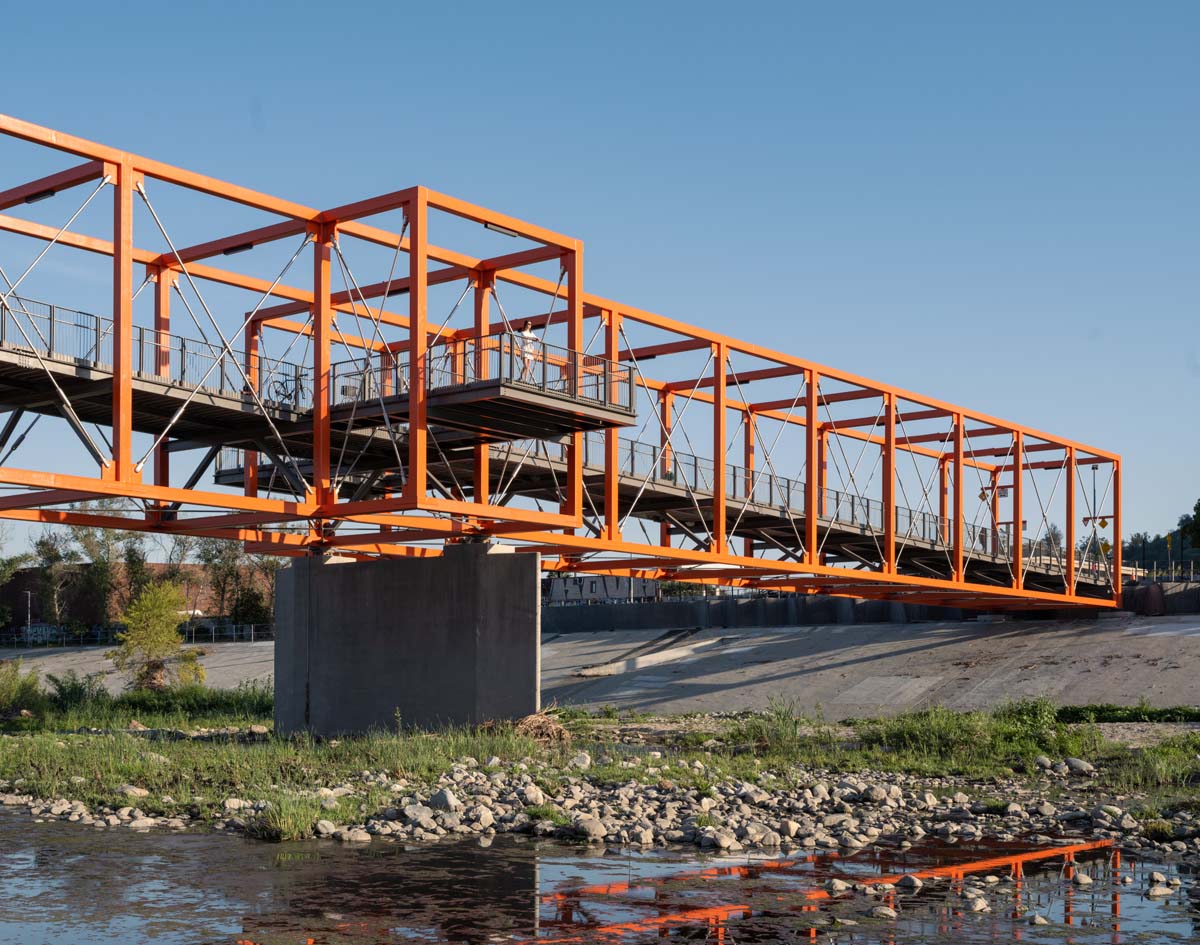 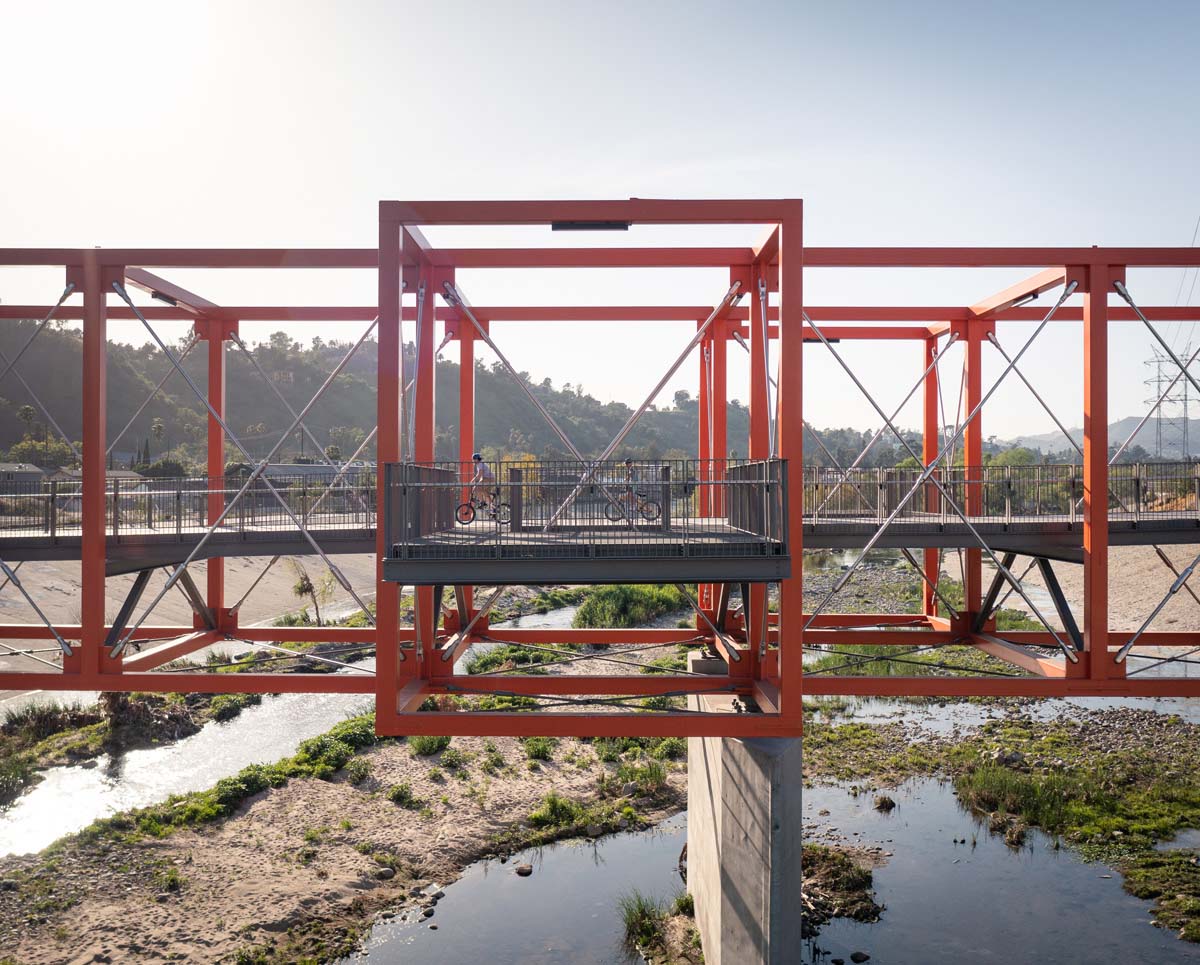 The overall strategy speaks to both the city’s industrial and cultural history. The bridge’s form and hue respond to the site, once a bustling railroad yard, until it was largely abandoned in the 1980s. Additionally, the project nods to the history of violence inflicted by the rival gangs that once populated the area. “The bridge is akin to a handshake,” says Pali, referring to the way it joins the two sides of the river.

For its approach to the landscape, Hood Design Studio also looked for inspiration in its surroundings, creating a scheme to stand up to L.A.’s harsh natural landscape and climate by incorporating climate-sensitive species, gravel, and rock for the bridge’s southern edges. For phase one of their plan, says Hood principal and studio director Alma du Solier, the team designed zigzagging planters that are evocative of the ebb and flow of rippling water and capture stormwater runoff from the adjacent bike path. Native species such as California goldenrod and mugwort abound, as well as other plantings—Toyon trees, Chaparral yucca, strains of prickly pear, Catalina mahogany, golden currant, and purple sage (with cacti to deter people from stepping into the plant beds). 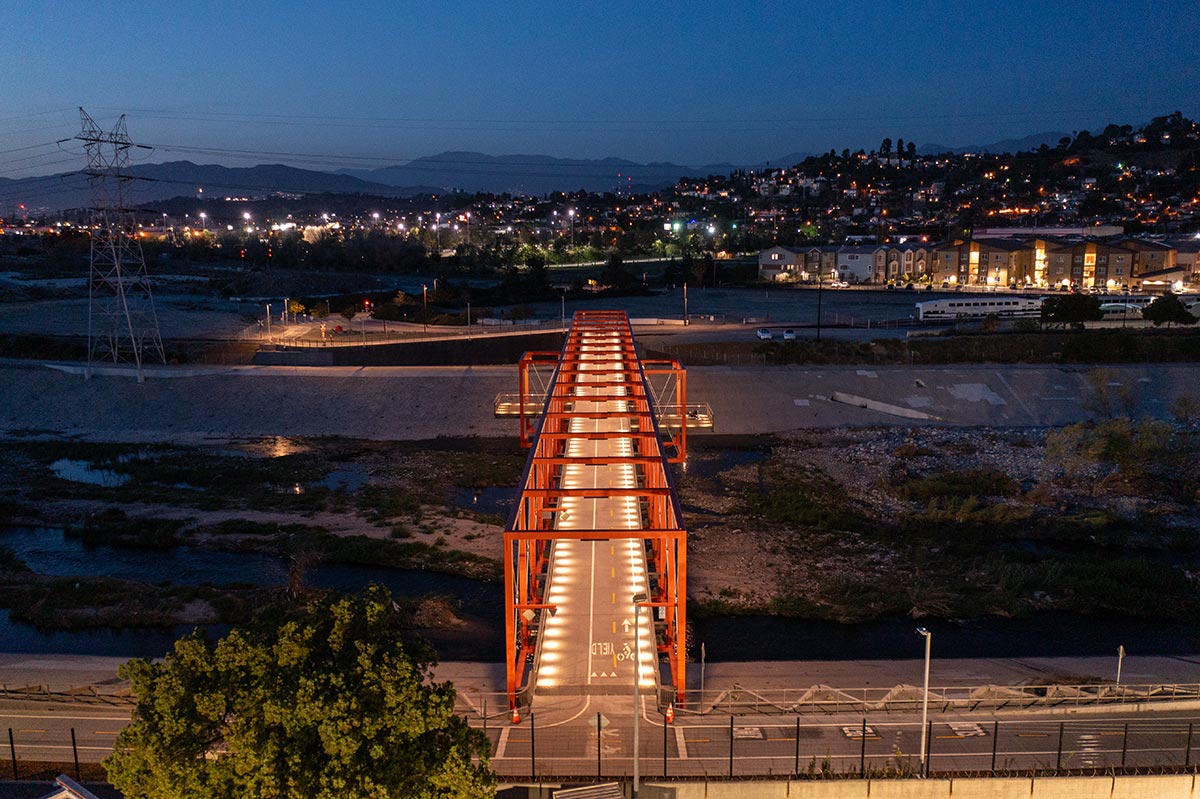 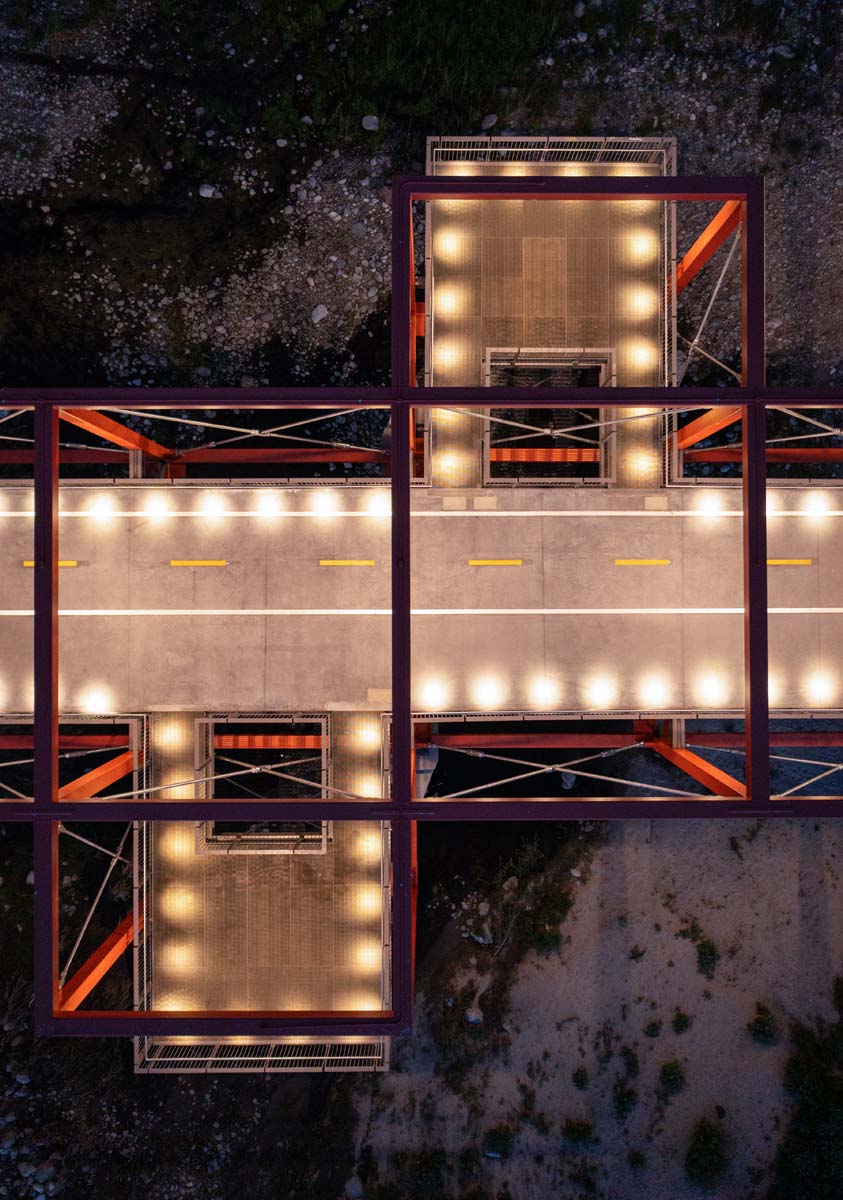 Illuminated at night, the bridge stands out against its urban backdrop. Photos © Mike Kelley

In the face of criticism about the continued lack of adequate pedestrian and cycling infrastructure in L.A. (case in point: the bike path that crosses Taylor Yard Bridge ends abruptly on its northern side), the city has promised that improvements are on the horizon. Still, Pali sees this project as a move in the right direction, through its remediation of part of the river and its linking of the neighborhoods that abut it. “This bridge, in a little way, adds to the betterment of the communities,” says Pali, and “to the ease of people being able to connect and interact with each other.”