James Wines, founder and president of the New York studio SITE, has long blurred the lines between environmental art and architecture. Several of his 1970s-era stores for the now-defunct Best Products Company famously looked like buildings suspended midway through the process of falling apart: are they sculptures or are they architecture? For Wines, the question is more important than the answer. That these projects prompt visitors to contend with their own assumptions about what a building should look like is a testament to their success—both as artworks and as works of architecture designed to attract attention within the commercial landscape.

Wines, a graduate of Syracuse University’s School of Art, was chair of environmental design at the Parsons School of Design in the 1980s, and later became a professor of architecture at Penn State University. He is the author of several books, and over a decades-long career has designed more than 150 buildings, public spaces, landscapes, and artworks around the world. At 90, he continues to lecture widely and take on new design projects.

RECORD’s Izzy Kornblatt spoke with Wines via Zoom about the origins of his approach, the limits of form-making in architecture, and his little-known collaboration with Virgil Abloh, among other topics.

How did starting out as an artist contribute to your approach to architecture? My own sensibility was nurtured by the ten years I lived in Italy and my realization that buildings can communicate. I was always enthralled by the way in which buildings spoke to me and I spoke to buildings—so the idea of having a kind of dialogue appealed to me. When I got back, I was still doing neo-constructivist sculpture, but that was the beginning of the environmental art movement. All my colleagues—Dennis Oppenheim, Vito Acconci, Mary Miss, Alice Aycock, and others—lived in Soho [in New York City] in the Greene Street area. We were all trying to get out of the precious gallery environment and into the streets. Why make object art, we asked, when you could communicate in the public domain?

It strikes me that many of your works make familiar elements of architecture unfamiliar, leading people to see the world around them in a different way. Has it been difficult to find clients interested in doing that?

We environmental artists had no idea how difficult it is to enter the public domain, with all the rules and regulations and restraints that you face. Taking the complexity of architecture and then weaving it into something that is a critique, or an observation about the act of building and the premises of building, is difficult. In the beginning, I had clients who were already art collectors, like Sydney and Frances Lewis [the owners of Best Products]. They embraced the idea that controversy is at the core of art. As Oscar Wilde put it, if it isn’t dangerous, it isn't worthy of being called an idea. Art is predicated on that, but architecture is almost the opposite. The idea in architecture is to make forms, to make shapes around a function. That’s still the prevalent thing in architecture today—the mission is to make the shapes fancier, especially with computer assistance. Where I diverge from that is in insisting that art has other purposes and other dimensions.

Your work is participatory. It prompts a range of reactions from people who otherwise wouldn't be thinking about what a building means or how it's made.

Yeah. And we want people to ask, what else could a building mean? What else could it mean beyond shape-making and form-making and so forth? But now, we’ve all been doing soul-searching. My main soul-searching is asking, have we done anything right? What have we produced in our lifetimes that in any way contributes to the environment, or to ecological balance, or diversity, or any of the causes that are framing all of humanity at this point? I've been doing lectures about the notion of “economy of means,” which is that you can make an interesting and complex aesthetic statement without breaking the bank. Everybody in their right mind knows that materials like aluminum and sheets of glass—just the off-gassing alone in their production is obscene. To make buildings out of aluminum and titanium has to be the craziest, stupidest thing you could possibly do in terms of the environment.

Tell us about your work with the late designer Virgil Abloh and his Off-White fashion brand.

One day, out of the blue, Virgil called and said, I want you to do some stores for me. He liked our philosophy, and he also knew that we'd worked with Willi Smith, one of the godfathers of contemporary African American fashion. He liked the idea that we work with simple objects and from the streets—he wanted everything to come from the streets. Collaging found objects and recycling materials is something that SITE does that isn’t always credited. The Ghost Parking Lot (1978), for example, was made with abandoned automobiles. And also, Virgil shared our philosophy of inversion. He would take whatever you assume a t-shirt or tennis shoe should be and invert it. We never got far because, sadly, of course, he passed away [last November]. We just did a few shops for him, in Ginza, Tokyo (2021), and Gyeonggi-do Province, South Korea (2020). And then we were going to have a big discussion about crafting a whole image, a showcase image that would be relevant and reflect both of our philosophies. He was a very, very imaginative person. He also had an entrepreneurial spirit, which was great, but that was not paramount. Too often, the focus [in the media] gets lopsided: it’s all about how successful he was, but not about the artistic strengths of his work.

What else are you working on now? 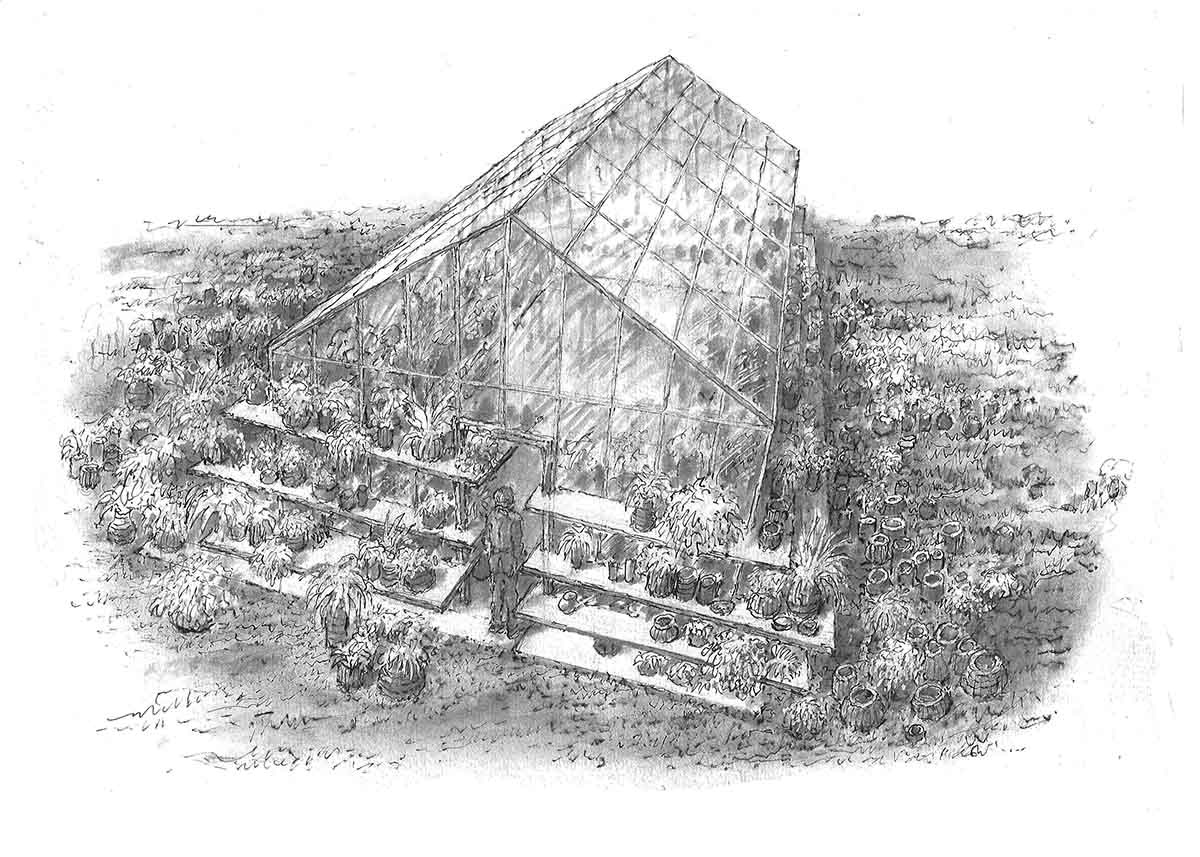 One of Wines's sketch for the greenhouse project. Drawing courtesy SITE

We’re working on a greenhouse project in California, which will include one-off greenhouses as well as a smaller one that people will be able to buy and install in their yards. The client is a developer who noticed that all greenhouses look alike, and asked, as we do, why does everything always have to be the same sensibility, the same approach, the same values?

My daughter and I are working together on this, and we’re learning that it’s highly specialized. Lots of research is going into how you keep the plants growing. But we're trying to take the generic greenhouse and transform it. It's not going to be so fancy that it isn’t recognizable in context.

James Wines will speak at the 2022 Monterey Design Conference, to be held October 28-30. Architectural Record is a media partner for the event.