Lessons in Teaching the Complex Reality of Carbon

A mere 44 years after graduating from Princeton’s School of Architecture, I was back. Dean Monica Ponce de Leon had invited me to give a lecture on embodied energy. I would focus on how architects’ determination to reduce operational energy was, in some cases, making the embodied energy problem worse, and how touting the former while ignoring the latter made buildings seem much “greener” than they really are.

I gave the lecture in the fall of 2021. A few days later, the dean asked me to expand it into a graduate seminar, which would give me a chance to guide students’ research on aspects of the embodied energy problem, while also working on my own.

It turns out that Princeton students have many chances to explore the topic. Professor Paul Lewis offers a graduate seminar focused on “the tectonics of plant-based building materials.” Professor V. Mitch McEwen teaches a seminar in which students create products like bioplastic brise soleils and new kinds of low-carbon insulation. At the same time, Forrest Meggers, a polymath who divides his time between Princeton’s architecture and engineering schools, has been providing an introduction to embodied carbon in his undergraduate level course “Designing Sustainable Systems,” and to life cycle assessments (LCAs) in his graduate level “Elemental Building Function.”

So how would I make my seminar different? Over the last few years, I’ve come to realize that one of the biggest impediments to reducing embodied energy is a lack of consensus on how to measure it. That's no surprise. Imagine a window with components from three different countries, which were shipped to a fourth for assembly and then to a fifth for installation. Calculating the amount of energy in that window involves making assumption after assumption, educated guess after educated guess, which is why experts may come up with very different answers. Unfortunately, the absence of consensus gives anyone inclined to ignore the problem an excuse for doing so. (By contrast, measuring operational energy, at least after a building opens, is about as difficult as reading a utility bill.) 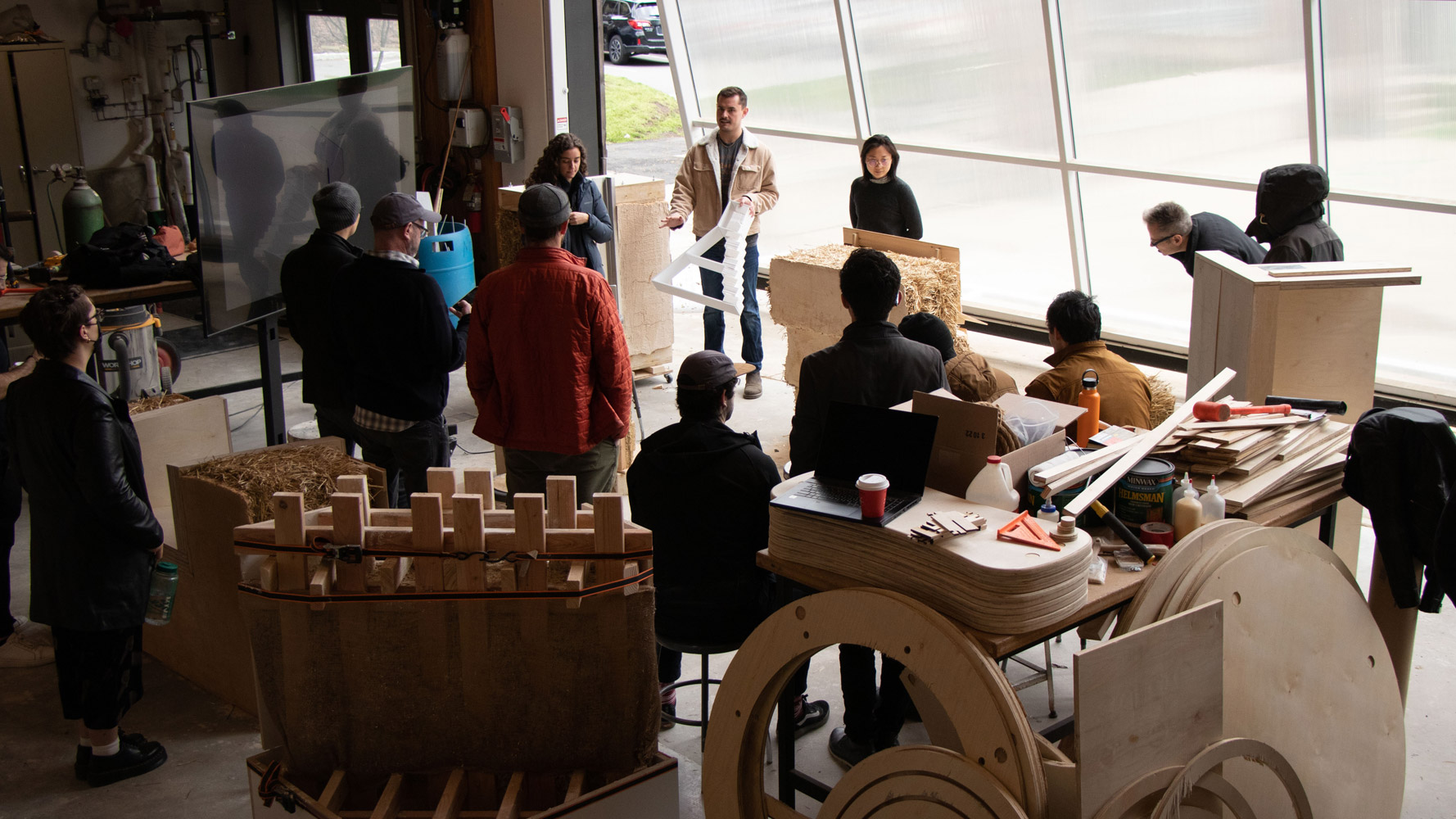 Professor Paul Lewis watches as one of his students presents work at Princeton's Laboratory for Embodied Computation. Photo by Danial Mahfoud

So I focused my course on the ways we measure embodied energy, those methods’ limitations, and how we might do better. The class began with examinations of some of the most common embodied energy apps for architects: Tally, One Click LCA, Edge and EC3. The goal wasn’t for students to become adept at using these tools but rather to understand the assumptions behind them—after all, the feedback these apps provide may affect the design of new buildings well into the future.  Then we looked at various LCA methodologies, which tend toward mind-numbing complexity. The LCA of Harvard’s experimental HouseZero, for example, resulted in a spreadsheet with 83 columns and 114 rows: that’s over 9,400 cells, some containing numbers computed to 15 decimal points (quadrillionths!). But with so many items—from plumbing to appliances—excluded from the LCA, the result overlooks much of the house’s real impact.

What to do? We turned to guest speakers for insights. Among them were Stacy Smedley, the executive director of Building Transparency, the creator of EC3; architect Chris Hellstern of Miller Hull in Seattle, who has performed many LCAs; and Steve Raciti, a scientist who was able to explain the mechanics of carbon sequestration in soil. Ron McCoy, Princeton’s University architect, gave us a candid look at the institution’s efforts to make embodied energy one of its criteria when evaluating designs for new buildings.

Themes emerged from our research. One was the importance of geography. Translating embodied energy into embodied carbon (which is what we really care about) requires knowledge of the carbon intensity of electricity production in the relevant location. Among the 50 states, that number varies about 1 pound of CO2 per kwh in Vermont, to about 1900 pounds of CO2 per kwh in West Virginia. The question of what measures to take to minimize a building’s total lifetime carbon emissions has very different answers in different places.

The students did great original research. One wrote about the embodied energy of solar arrays versus that of wind farms, a crucial question as we decarbonize the grid. Another wrote about the carbon emitted into the atmosphere when soil is disturbed, or covered with asphalt or concrete, an important topic because in some active ecosystems there can be as much carbon below ground as above it. (And it’s timely, given the push by the federal government to build new highways under the rubric of infrastructure improvement.) My own research involves ways property owners can determine which energy-saving retrofits will actually reduce total carbon emissions. The recently passed Inflation Reduction Act provides about $10 billion to subsidize the costs of installing rooftop solar panels, electric (instead of gas) appliances and efficient heating and cooling systems. But how long will it take for the energy those systems save to outweigh their embodied energy? Until there’s an easy way to do those “carbon payback” calculations, billions of dollars may be spent on improvements that, from a climate change perspective, make things worse, not better. I can’t think of a more important subject to address.

As Dean Ponce de Leon wrote when she asked me to teach the course, “Implications and Complications of Embodied Energy Analysis,” again next spring, students are “really thirsty for the topic.”