Rose Apartments, a building that opened last spring in Los Angeles’s Venice neighborhood, is the opposite of bland, monolithic, institutional-looking housing. With casual elegance, it greets the street with lightness, in both massing and color—its verdant terraces and roof decks playing against its bright-white volumes. “This is the first 100-percent low-income, multifamily housing from the ground up in Venice in over 20 years,” says Becky Dennison, executive director of Venice Community Housing (VCH), the nonprofit that commissioned and operates the 35-unit, mixed-use structure for a formerly homeless population. “We encountered appeals at every level of approval,” she recalls, “but local support ended up far outweighing the opposition.” Successfully harnessing legislative changes—which made the project possible—VCH worked closely with Los Angeles–based architects Brooks + Scarpa (B+S) to create a building that embraces its residents’ needs while also contributing to the surrounding neighborhood. The building in context. Photo © Jeff Durkin, click to enlarge.

Among Venice’s longstanding challenges were highly restrictive land-use plans, exacerbated more recently by soaring property values. But, in the years immediately preceding this project, the state began overriding some of the constraints that had, as Dennison puts it, “made it virtually impossible to build multifamily affordable here.” The ongoing changes have included a state bill, passed in 2018, that streamlined approval processes and requirements for supportive housing, enabling VCH to bypass certain local land-use restrictions in addressing the dire need. Some parking requirements eased up significantly for eligible housing, and other legislation ensured that California’s Density Bonus Law—which offers development incentives and greater density allowances for affordable and senior housing—would apply to previously exempt coastal zones such as Venice.

Meanwhile, despite the neighborhood’s escalating land costs, VCH upheld its core conviction that affordable housing should be part of every community. “So we met with a series of local partners,” recalls Dennison, “to see how we could get back into developing here on a grander scale.” A breakthrough came when B+S principal Angie Brooks encouraged Dennison to build housing right where the two were meeting—on the site of VCH’s administrative headquarters, on Rose Avenue, just off the commercial thoroughfare of Lincoln Boulevard. There the organization already owned a “mini-campus” (with nondescript single-story buildings) on a 100-by-145-foot double lot. Feasibility studies for replacing them with housing followed, with encouraging results. An essential factor was the 2016 passage of Los Angeles’s Mobility Plan 2035, geared toward safer, multi-modal streets with less reliance on cars. In supplanting the city’s existing roads-and-transportation scheme with far more pedestrian- and cyclist-friendly approaches, it rolled back plans to widen streets, including Rose Avenue. And that bumped VCH’s front property line forward 13 feet, expanding the buildable area and allowable density (calculated from lot size).

The ensuing project, which came to $12.4 million in construction and $7.6 million in additional development costs, drew on state, federal, county, and city funds. And B+S—winner of the 2022 AIA Gold Medal—tapped into its extensive experience optimizing tight sites for multifamily affordable housing (including the 2016 Gateway Apartments, in Marina del Rey, for VCH) and The Six in the MacArthur Park neighborhood. For Rose, the organization targeted two groups: unhoused transition-age youth (TAY)—people between 18 and 24, many of whom had “termed out” of foster care and ended up on the streets—and homeless adults of all other ages. By splitting the tenant population fifty-fifty between those two demographics, Dennison says, her team aspired to attain the well-documented “positive effects of intergenerational housing.”

The design goal was to achieve a feeling of openness while, quietly, protecting the inhabitants. “Safety and security,” Dennison points out, “are particularly important to people who’ve been living on the streets—but offered without looking like ‘safety-and-security measures,’ without seeming confining, guarded, or fortresslike.” So, the curb-to-apartments route is inconspicuous, leading through a modest, unmarked gate, set back along one edge of the building, and down an open-air passageway to the stairways and elevator. Stepped seating at one end of the central courtyard offers an attractive place to relax. Photo © Jeff Durkin A recreation room on the second floor is entered from the courtyard. Photo © Jeff Durkin

“It was important to help create a good neighbor and an uplifting place to live—and to accomplish that through practical and maintainable solutions within our tight budget,” says Brooks. So B+S treated the two mandatory fire stairs, for example, as prominent open-air design elements—taking advantage of the mild climate and strengthening the internal sense of connection and community. Equally sensibly, the courtyard configuration allowed for a transom window over each front door, offering every apartment cross-ventilation. Features such as solar water-heating panels helped this LEED Gold–certified building achieve an energy rating 55 percent more efficient than California’s stringent code. A fire stair acts as a sculptural element (1 & 2) as well as egress. A. Photos © Jeff Durkin

Along with 31 studios and three one-bedroom units, Rose provides for a resident property manager, as well as integral supportive services with two full-time caseworkers and a part-time mental health specialist. A light-filled community room with an open kitchen hosts tenant meetings, cooking classes, potluck dinners, a mini-library, and other functions and activities. Near supermarkets, a food pantry, 99-cent store, and community health clinic, the centrally located complex has a high walk score (92) with easy access to mass transit and bicycle routes. “This building was a real jump-starter for reestablishing low-income housing in Venice,” says Dennison. “We now have 49 other units in construction, and another developer is doing 90. After all the obstacles, we’ve heard only positive things from neighbors about the completed building.”

Soon after moving in, residents began personalizing their spaces. One tenant curated her outdoor entry area with potted plants and delicate whirligig and butterfly ornaments. Another, an artist who’d lived on the streets for 35 years, filled his apartment walls—including a bathroom “gallery”—with his own expressive works. “This place has rescued quite a few people,” he said recently. “It’s been a real lifesaver. I think it deserves an award.” 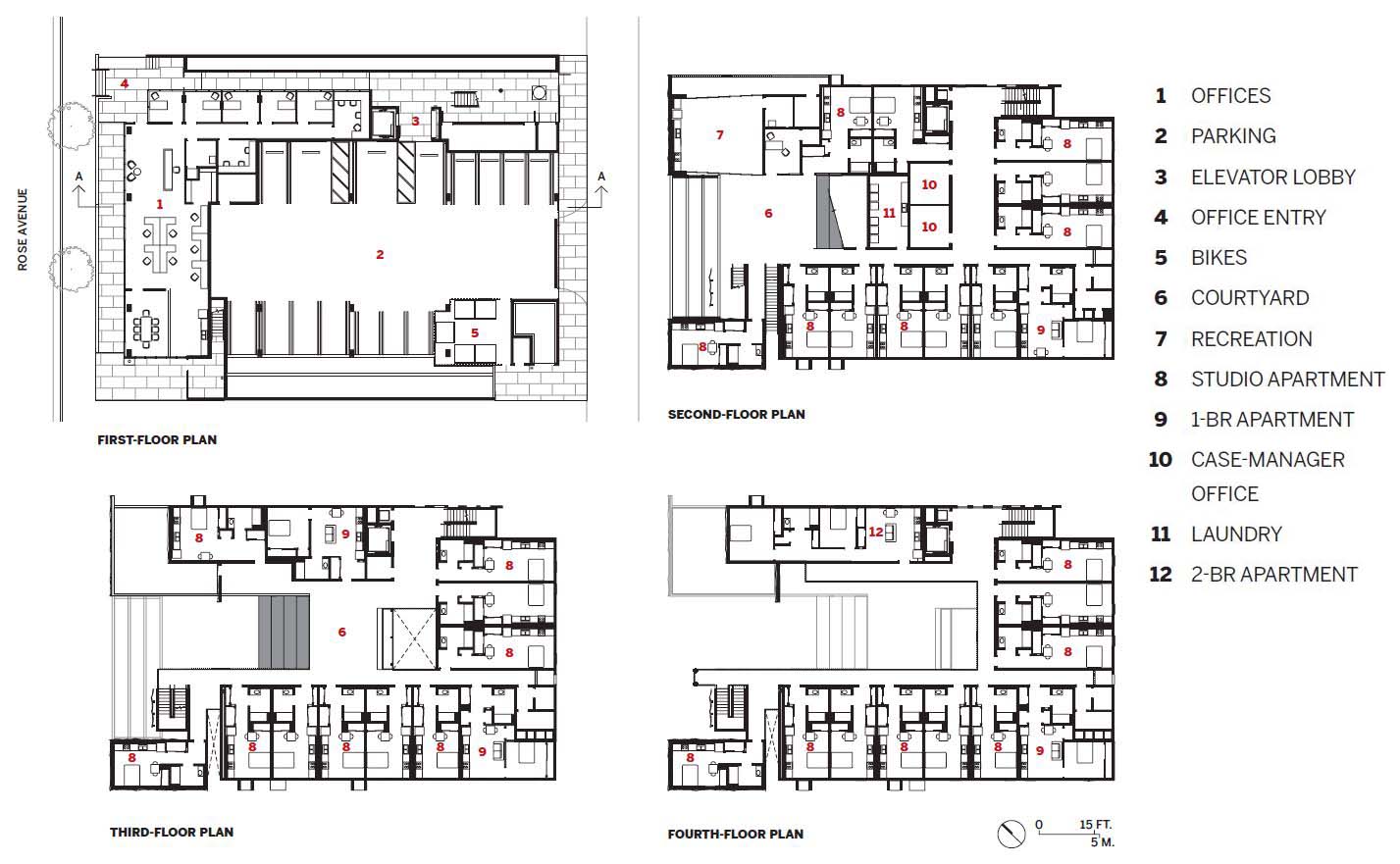