What does an esteemed private school in New York’s dense confines do when it cannot accommodate all its programs in its historic building? It takes its show on the road.

In 1892, Clara Spence, a pioneering educator who believed in higher education for women, opened Miss Spence’s School for girls to prepare her pupils for college. For almost 100 years, the Spence School has occupied a Neo-Georgian edifice designed by John Russell Pope in Manhattan’s illustrious Carnegie Hill neighborhood, a stone’s throw from Central Park. Despite a recent major renovation and expansion of the building, which today houses the middle and upper schools (younger students are in a different building), Spence needed a regulation gym for the competitive play of basketball, volleyball, squash, and badminton. Other nearby private schools had found separate locations for athletic programs, and Spence, too, looked for space beyond its immediate neighborhood. A dozen years ago, the school purchased an old garage six blocks east in a decidedly less refined precinct of warehouses and apartment buildings. After an invited design competition, New York–based Rogers Partners began to conceptualize the new structure and how it could be more than just an athletic facility. “Holy moly!” thought Bodie Brizendine, the head of school during design and construction. “I have a site for a whole new building! Now what are we going to do?!”

Two important considerations drove the programming, says firm principal Rob Rogers. First, how do you make the facility belong to the whole student body—including the lower school—not just athletes? Second, how do you activate it throughout the day, beyond after-school team practices? “This is Manhattan real estate—it’s too valuable to not use it,” notes the architect. On the ground floor, the regulation gym not only serves Spence’s basketball and volleyball teams (regular PE classes are still held in teaching gyms in the two main buildings), but it is also used widely for competition by other private schools, as well as for PE class by two public schools. Next to and above the gym are locker rooms—even when they are empty, you feel the presence of the athletes, who have scrawled inspirational messages on the whiteboard walls. “Before a game, this place is alive!” says Coni Fichera, director of athletics. Nine squash courts—a rarity in the city—can be closed off from the rest of the building, enabling use by the outside community and, like the gym, they generate revenue from rent by other schools’ teams. On the fifth level, a multipurpose room with a sprung floor accommodates dance, theater, film, and events. And, on the top floor, an ecology center with a classroom, teaching kitchen, greenhouse, and rooftop garden serves the whole K-12 community. “It moved from being an athletic center to a beautiful building with programming all the way through,” says Brizendine. Learning extends out onto a rooftop garden. Photo © Albert Vecerka

Fitting all this program into the constricted 59,000-square-foot city zoning envelope was like solving a jigsaw puzzle. The starting point for the internal organization was the decision to put the gym at ground level. Though more expensive than situating it on a higher floor—because of the additional structure required by a clear-span space to carry the load of the upper levels—the gym had to provide egress as a competition space that can hold more than 450 spectators. Three massive steel trusses above the ceiling eliminate the need for columns, enabling the exacting dimensions for regulation courts. Another critical decision was to stagger the squash courts sectionally across two floors—a brainstorm of the firm partner Alissa Bucher. The strategy enables the corridor leading to the courts on the fourth floor to serve as a viewing balcony overlooking the lower courts, and it also means the courts consume less volume than simple vertical stacking would. “It was a brilliant sandwich she came up with,” says Rog­ers. Tying it all together is a central stair, with quarter-sawn maple paneling, that winds up through the building and becomes a social connector as students and others congregate in the various common spaces surrounding it, animating the core with their activity. The action inside can be read from the street, as passersby see light and movement through the largely translucent curtain wall of insulating double-laminated, patterned glass, designed with the firm Front. Game nights are particularly exciting, when hundreds of energized girls and their families fill the building with their cheers. “We want to be an active and lively neighbor, not just a big blank wall,” says Rogers, explaining that, in addition to the gym, this is where the architects spent a sizable chunk of the budget. “The rest could be a shed,” he says. The approach has paid off, presenting a handsome, welcoming face to the street.

Otherwise, the building is not about fancy materials. Throughout much of the interior—with its polished-concrete floors—gypsum board, perforated wood veneer, and other basic finishes are used on the lower portions of the walls while, above, structure, ductwork, and conduit are left exposed. It is an honest approach that is fitting.

On a crisp morning recently, the thumping of basketballs filled the air as third graders from a nearby school played in the gym. Diffuse daylight streamed onto the courts, and gathering spaces buzzed with the activity of a teachers’ professional-development meeting. Soon, the Spence volleyball team would arrive for practice. Says Brizendine, “It’s the community center we wanted it to be.” 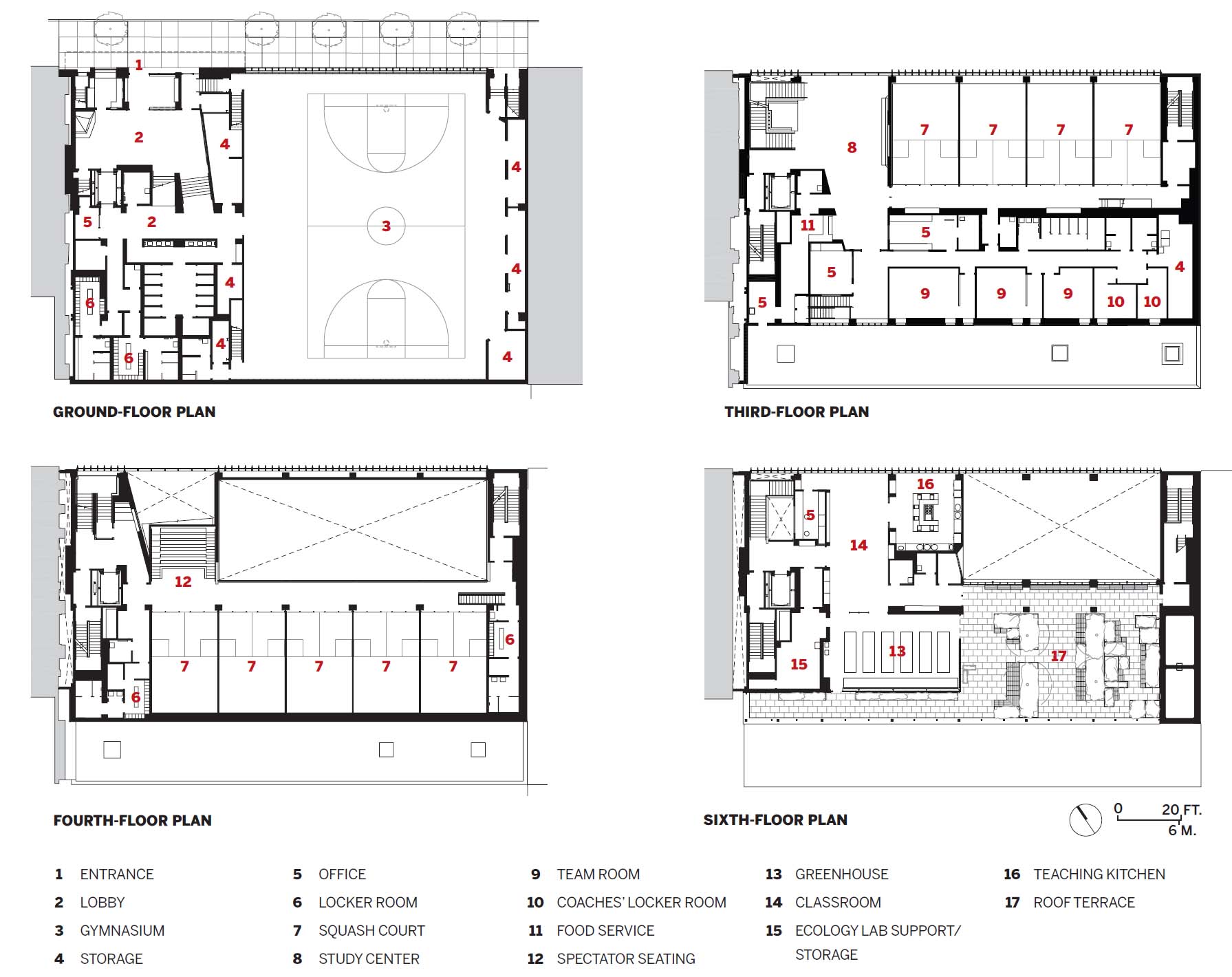 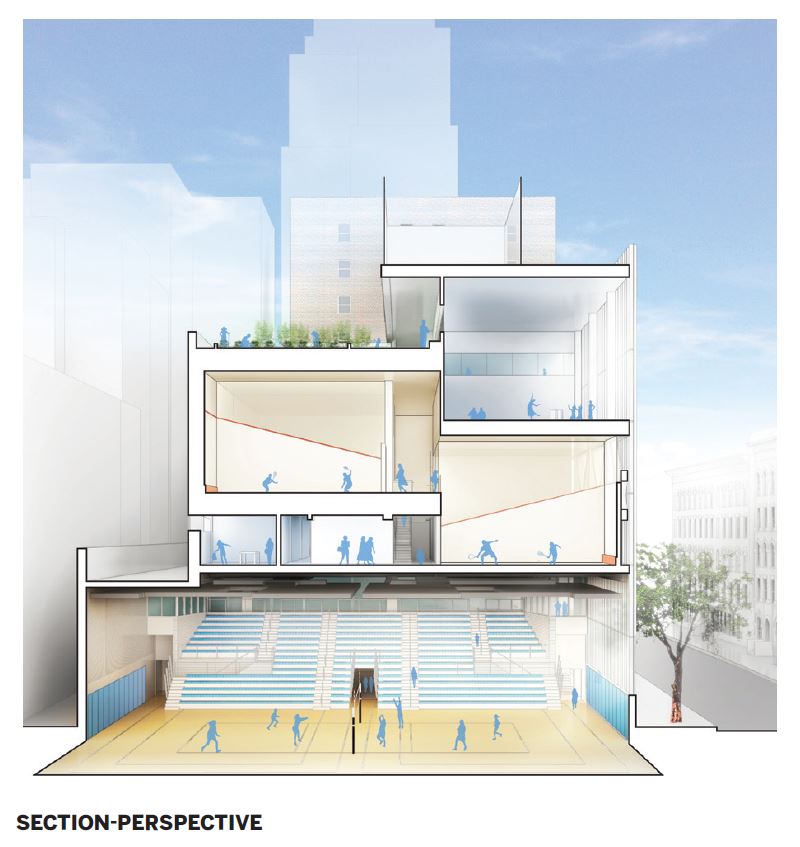