“We may be tiny, but we’ve made other places in the region jealous,” proudly declares 80-year-old Hubert Zoutu, mayor of Heudebouville in southern Normandy, a village of 800 souls in the Seine Valley. The reason for their envy? Heudebouville’s splendid new school—a $4.7 million, 17,000-square-foot facility that replaces a cramped, inadequate jumble of buildings dating back to the 19th century. “What’s more, it was a team of young architects who built it,” continues the mayor, referring to Charles Hesters and Pierre Martin-Saint-Étienne, both 34, cofounders of the Paris-based office HEMAA, who won the December 2018 design competition with a little help from Charles’s architect parents, Jacques Hesters and Brigitte Oyon (of Hesters-Oyon, also in Paris). “My parents had too much work, so we offered to do the competition design,” recalls Charles. “They have a lot of experience with schools, and corrected a couple of things here and there, but the project was ours. We hadn’t yet founded HEMAA, so it was submitted in their name, but we oversaw construction after setting up our office.”

Located on a (literal) greenfield site, in the shadow of Heudebouville’s 13th-century church tower, the École Les Coteaux Fleuris takes its cues from the context. Under the village’s planning regulations—recently updated with environmental concerns in mind—earthworks must be kept to a minimum, which ruled out major excavation or embankment of a site that slopes gently in the direction of the Seine. Conse­quently, in a layout reminiscent of medieval strip farming, HEMAA organized their building as a series of parallel wings, each slightly lower than the previous one as they descend the hill, linked together internally by a long hallway (the only place inside where the slope is perceptible). In a growing village—population is expected to reach 1,000, due to the presence of a nearby industrial zone—this arrangement also has the advantage of allowing future enlargement. While the school is dimensioned for 150 pupils (it currently counts 93), its wings could easily be lengthened, in the case of greater population growth, without disturbing the functioning of the existing parts. “We already put in some of the drainage for that,” explains Hesters, “and registered the school with the fire authorities as bigger than its current capacity, so as to ensure a smooth transition when the time comes.” Built on a greenfield site near a 13th-century church tower (top of page), the École Les Coteaux Fleuris (above) takes cues from its context. Photo © Sergio Grazia, click to enlarge.

Again in response to context, the wings take the form of archetypal pitched-roof volumes that recall both traditional French longères—long, narrow farmhouses—and Norman barns. “The client asked us to respect strict environmental standards, which meant we had to watch our embodied carbon,” says Hesters, referring to the CO2 emissions associated with materials manufacturing and construction. “That ruled out concrete. We could have used rammed earth or hemp bales, but instead we chose wood, since traditional farm buildings in the area are built using timber frames.” Two varieties of structural timber have been employed, both sourced in France: weather-resistant Douglas fir for parts exposed to the elements, and cheaper pine for those that are not. The glulam gable frames were prefabricated off-site, as were the insulated wooden facade and roof panels, allowing quick and easy mounting of the shell. Moreover, just as traditional timber buildings sit on a masonry base, so the École Les Coteaux Fleuris is set above the damp ground on a plinth of prefabricated concrete blocks, which are themselves bolted into the site-cast foundations.

At home in its rural setting, the school resembles the area’s traditional farmhouses (1), and has ample open and covered outdoor playgrounds (2 & 3). Photos © Sergio Grazia For the roof, HEMAA chose hard-wearing low-carbon slate, traditionally a noble material that was used for châteaux (such as nearby Gaillon, the summer seat of the bishops of Rouen) and churches, like the spire at Heudebouville. As well as being contextual, this choice embodies the high-minded, official nature of French schools, which are viewed as frontline ambassadors of the secular, centralized state. To their dismay, the architects discovered that slate is now hard to come by in France, but found a competitive supplier not too far away, in northern Spain. Slate also harmonizes with the 2,500 square feet of roof-mounted solar panels—intended to make the school energy positive by providing more electricity than is needed to run it—while an air- and water-sourced heat pump avoids recourse to fossil fuels. A system of ground-level gutters channels rainwater into a reservoir, which feeds the school vegetable patch, thanks to a hand pump in the playground, the latter extending into a grassy orchard. Inside, kitchens, administration offices, and the sports hall are lined up on the street, while the classroom wings (distinguished by their asymmetrical gable frames) project out to the rear. There are two of them—one for maternelle children (ages 3 to 6) and the other for élémentaire pupils (ages 6 to 11)—with classes accessed by long corridors, but also connecting in enfilade. Thanks to the wide-span frames—between 40 and 50 feet—all the interiors could easily be reconfigured in the event of a future change of use. While dropped ceilings hide mechanical ventilation in the classroom wings, the building’s structure is expressed in the two préaux couverts—outdoor shelters found in every French school, which allow playgrounds to be used in wet weather—and the sports hall, as well as in the dining hall, where ventilation ducts are also exposed. “Were we to do the project again, we’d encourage the client to get rid of the dropped ceilings and expose the structure and ducting everywhere,” says Hesters, gazing wistfully at the dining room’s warm, handsome all-wood volume. Hesters and Martin-Saint-Étienne poured a lot of energy and enthusiasm into this, their first big project, and you can feel it in the attention to detail, from the design of the metal gutter covers and windowsills to the way facade verticals (to which windows and wall elements are attached) elegantly double as brise-soleils, or the sleek dissimulation of the bolts holding the timber frame together. They are currently converting the old school buildings into a village sports hall, day-care center, and meeting space. “Once all this is completed, I can retire without feeling bad,” says Mayor Zoutu, who will turn 84 in 2026, when his third term in office comes to an end. 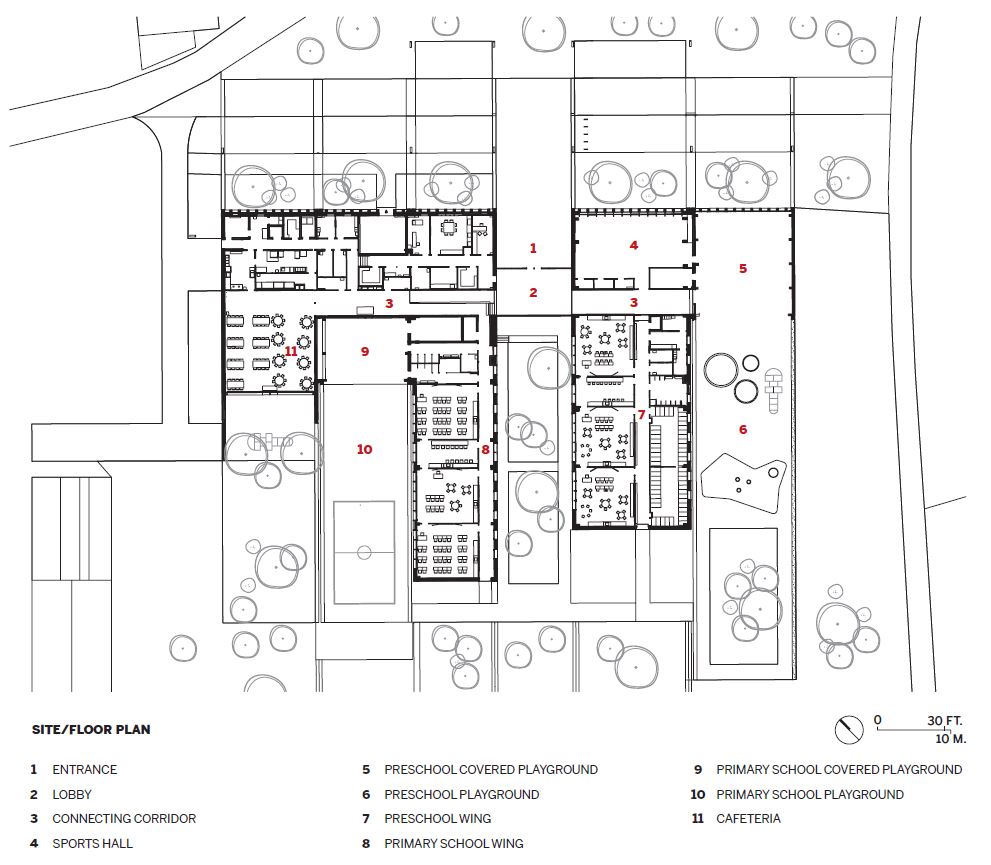