Behind SANAA's Illusion of Weightlessness

Now that the New Museum on Manhattan’s Lower East Side is complete, and its structure enclosed, there is little evidence of the system that supports the seven-story building that seems to be made up of nothing heavier than precariously stacked cardboard boxes. But here and there, through its expanded metal-mesh facade, and from behind windows, architects Kazuyo Sejima and Ryue Nishizawa of Tokyo-based SANAA have provided an occasional glimpse of a diagonal brace. 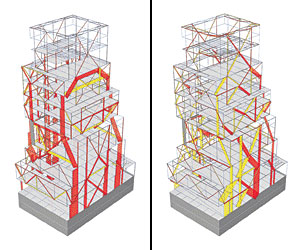 The engineers analyzed the structure to understand how it would react to conditions such as gravity loads (above left), or lateral loads from the east (above right). The red members are in compression, while the yellow are in tension.

The diagonals are part of story-deep perimeter trusses devised by engineers Mutsuro Sasaki from Tokyo and New York City–based Guy Nordenson, with the Manhattan office of Simpson Gumpertz & Heger [SGH] as structural engineer of record. These trusses are the primary components of the gravity- and lateral-load-resisting system for the $50 million museum, open since December. By “wrapping forces around corners,” explains Nordenson, the trusses permit the museum’s volumes to shift relative to one another, allow perimeter skylights at setbacks, and provide column-free galleries spanning up to 40 feet.

Most of the stacked boxes shift in only one direction relative to the one below. There is an exception, however: The third floor slips diagonally, allowing for skylights at both the west and north edges of the second floor. In the early stages of design, this setback was supported by a truss exposed on the interior that crossed the northwest corner of the gallery. But the condition later seemed out of place to the engineers, so they eliminated the truss and instead used the core and the side truss walls to anchor the cantilevered street-facing wall, creating what Nordenson refers to as the “floating corner.”

The team meticulously analyzed the whole structure to understand how to resolve and resist various loads, but this area was particularly challenging. The engineers needed to ensure sufficient strength and stiffness and carefully plan the sequence of construction, says Kevin Poulin, SGH senior project manager.

Two levels above this seemingly floating element, another detail gives the impression that the building is made up of little more than paper. Here, the volume housing the fifth-floor education center slides to the north creating an exterior overhang. This level has a stepped slab and a partial raised floor, providing a very practical cavity for computer terminal cabling. But viewed from the exterior, the underside of the overhang seems to be at exactly the same level as the top of the slab, creating the illusion that the building envelope has no thickness. Of course, Sejima and Nishizawa, the architects of the Glass Pavilion at the Toledo Museum of Art, in Ohio, are known for their fascination with lightness and immateriality. Nordenson, also part of the pavilion’s design team, jokes that “Sejima and Nishizawa can never have things too thin.”