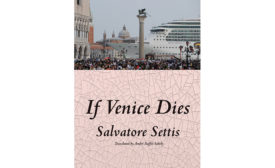 It might seem strange that, in a book titled If Venice Dies, the first mention of rising sea levels doesn’t come until page 45, and a discussion of the city’s scandal-plagued flood-barrier con­struction is held back until page 140.

After the Manifesto: Writing, Architecture, and Media in a New Century

The first lines of Craig Buckley’s introduction to this collection of essays from the proceedings of conferences on the subject of manifestos at Columbia and the University of Navarra in 2012, seem surprising.

Building for a Changing Culture and Climate: World Atlas of Sustainable Architecture

Philip Nobel
No Comments
By Ulrich Pfammatter. DOM Publishers, May 2014, 584 pages, $116. This well-documented volume casts a wide net in gathering sustainable projects from around the world-including floating reed houses in Iraq and the glass-and-steel headquarters Christoph Ingenhoven designed for Swarovski in Switzerland-and has a foreword by Stefan Behnisch.
Read More

The Architecture of Paul Rudolph

Philip Nobel
No Comments
By Timothy M. Rohan. Yale University Press, July 2014, 300 pages, $65. A Shakespearean Tale Told in Buildings When Paul Rudolph's Art & Architecture Building at Yale opened in 1963, architectural historian Vincent Scully wrote that the design “puts demands upon the individual user which not every psyche will be able to meet.” The building was gutted by a suspicious fire in 1969, and, though the cause was never determined, the incident has been interpreted, in whispers and in print, as a rejection of the difficult-to-parse architecture and the difficult-to-pigeonhole architect. Much as the mystery or grandiosity or wit of
Read More
Subscription Center
More Videos