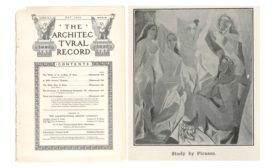 The Wild Men of Paris

In 1910, Cubism was beginning to make itself known, though some of the artists that Gelett Burgess, a draftsman and illustrator by trade, writes of, such as Picasso, had already made something of a mark (the "Blue Period" was several years in the past). But this essay, which Burgess shopped around before having it purchased by Architectural Record, has become known as a seminal work on this group, even though it is not taken entirely seriously.