Not far from where the Chama River meets the Rio Grande, about 30 miles north of Santa Fe, the Ohkay Owingeh—one of 19 federally recognized Native American Pueblo tribes in New Mexico—live on land they have inhabited for at least 600 years.

Stitches in Time: A well-executed renovation, along with a few carefully conceived insertions, weaves together a museum’s trio of stylistically distinct landmarks.
Joann Gonchar, FAIA
No Comments

The Yale University Art Gallery (YUAG) is inaptly named. The word “gallery” doesn't convey the institution's size and its almost encyclopedic scope, with holdings that number more than 200,000 objects encompassing an array of eras, cultures, and media.

Joann Gonchar, FAIA
No Comments
Forest City Ratner Companies (FCRC), developer of the $4.9 billion Atlantic Yards project in Brooklyn, New York, has officially announced today that the mixed-use complex’s first residential building—a 22-story, 350-unit, metal-and-glass-clad tower designed by SHoP Architects—will be built with modular methods. The developer has estimated that the modular structure, which will have a series of setbacks and cantilevers, will cost about 20 percent less than a nearly identical conventionally constructed tower. FCRC will partner with construction and development group, Skanska USA, to create FC + Skanska Modular. The new company will rely on union labor to assemble the components in
Read More 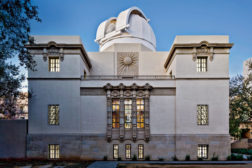 Architectural Resources Group renovates a historic laboratory building in California, combining respect for the past with technical innovation and energy conservation.

Let the Fresh Air In: A tower offers an alternative to the hermetically sealed glass box
Joann Gonchar, FAIA
No Comments

At 33 stories and about 550 feet, PNC Financial Services Group's new headquarters in Pittsburgh will not break any records for its height.

How Green A Garden Grows: A Conservatory targets a certification trifecta.
Joann Gonchar, FAIA
No Comments

Pittsburgh is home to what is arguably one of the greenest buildings in the country: the Center for Sustainable Landscapes, a recently completed facility for research and educational programs on the campus of the 119-year-old Phipps Conservatory and Botanical Gardens.

Joann Gonchar, FAIA
No Comments
Photo © Bruce Damonte Pittsburgh-based PNC Financial Services Group claims more green buildings than any other company in the world. Nationwide it has about 160 LEED projects, with several major ones on its home turf, including Three PNC Plaza (background), a glass-clad, 23-story mixed-use building by Gensler. When it opened in 2009, it was the first tower completed in the downtown core in more than two decades. The building has three programmatic elements'a hotel, condominiums, and office space'with separate but interconnected lobbies. It overlooks Market Square (foreground), a recently renovated public space surrounded by restaurants and retail that was the
Read More

Joann Gonchar, FAIA
No Comments
Photo © Brad Feinknopf The sweeping roof of Rafael Vi'oly's David L. Lawrence Convention Center (below) echoes Pittsburgh's 'Three Sisters' bridges. When it opened in 2003, the LEED Gold, 1.5 million-square-foot facility was the world's largest green building. Earlier this year, the convention center earned a Platinum rating for its operations and maintenance practices as part of the LEED-EBOM program, making it the first convention center with certification for both new construction and existing buildings. In 2011, a waterfront plaza in front of the building (bottom) was completed, extending an existing shoreline trail for pedestrians and cyclists. The park, designed
Read More 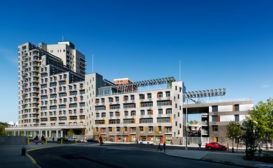 Via Verde by Dattner Architects and Grimshaw Architects