C. J. Hughes
No Comments
Image courtey HDR and Corgan Associates Construction is under way on Parkland Hospital, a 2.1 million-square-foot project in Dallas by HDR and Corgan Associates. It has been hailed for increasing coverage, streamlining the delivery of care, and lowering costs. But the Patient Protection and Affordable Care Act, or Obamacare, the federal health insurance law that has generated controversy since its 2010 passage, has also led to the layoffs of dozens of architects at two firms, HDR and Jain Malkin, according to staff. This past summer and fall, HDR, an Omaha-based global architecture and engineering practice with a large healthcare portfolio,
Read More

Image courtesy Visualhouse/KPF Kohn Pedersen Fox’s master plan for the Hudson Yards development sprawls along the Hudson between Tenth and Twelfth Avenues, and West 30th and West 33rd Streets. After years of debate and delays, Hudson Yards—an ambitious plan to create a new mixed-use neighborhood from scratch over railroad tracks on Manhattan’s west side—is finally breaking ground. Excavations for the first office tower on the site, designed by Kohn Pedersen Fox Associates (KPF), which also created the master plan, will begin by the first week of December, according to a source at the Related Companies, its co-developer with Oxford Properties

C. J. Hughes
No Comments
The AIA releases its 2012 firm survey. Courtesy Cooper Carry/TVS Architects The Marriott Marquis Convention Hotel, designed by Cooper Carry and TVS Architects, is under construction in downtown Washington, D.C. The Great Recession has hardly been good to architects. But the extent to which it fundamentally changed the industry was not always clear. Now comes a sweeping 40-page report released this month from the American Institute of Architects (AIA), the industry’s leading trade group, that specifically details the recession’s damage and what firms did to cope. And those survival strategies may portend new ways of doing business. The bad news
Read More

C. J. Hughes
No Comments
Architects are increasingly finding opportunities for inventive work in one of the world's most densely populated regions. The exterior of the Hong Kong outpost of the Savannah College of Art and Design (SCAD). The former justice building was adapted for SCAD by Leo A. Daly.
Read More

C. J. Hughes
No Comments
New renderings of One World Trade Center released last week give a more detailed look at a slimmed-down design for the Lower Manhattan Skyscraper’s 408-foot spire. Not only could the design change keep the tower from reaching a symbolic height, it might also compromise its bid to be the tallest building in the United States. Skidmore Owings & Merrill (SOM) and structural consultant Schlaich Bergermann und Partner’s original design for the spire enclosed it in a tapering shield of white fiberglass plates. But last year, in a move that saves $20 million in construction costs, the development team of the
Read More

C. J. Hughes
No Comments
The Bachman-Wilson House (1954), designed by Frank Lloyd Wright, is looking for a buyer to relocate it. A Hillsborough, New Jersey, house designed by Frank Lloyd Wright that’s been ravaged by floods over the years is looking for a buyer who can relocate it. The 1954 concrete-and-mahogany structure, known as the Bachman-Wilson house, sits next to the Millstone River, which has jumped its banks seven times in the last two decades, according to owner and current resident Sharon Tarantino.And the last time, in August 2011, during Tropical Storm Irene, the flooding was extreme; six feet of water surged through the
Read More

C. J. Hughes
No Comments
Photo © Sye Williams Yeekai Lim started a coffee company in 2009 due to a slowdown in architectural work. The recession and its aftermath have clearly taken a toll on the architecture profession. In May, during the AIA’s annual convention, Kermit Baker, the institute’s chief economist, reported that 60,000 payroll jobs had been lost at firms over the past four years, with 36,000 of them being designers and architects. Of that group, about a third have found work outside of architecture, according to surveys conducted by the AIA. Roughly 6,000 of these architects will likely quit the profession for good,
Read More 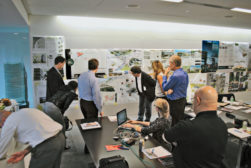 C. J. Hughes
No Comments
Architecture firms are increasingly offering in-house design awards in an effort to boost morale and inspire creativity. Photo courtesy Perkins+Will (Left to right) Casey Jones, Ron Bogle, Nancy Easton, and Steve Turckes assess entries in Perkins+Will's annual design competition in 2011. Ed Feiner, the former chief architect of the General Services Administration, made a name for himself creating the agency’s well-regarded Design Excellence program, which raised the creative bar for government buildings. Today, he’s taking on a similar challenge at Perkins+Will (P+W), which he joined in 2009. As director of the firm’s design Leadership Forum, started in collaboration with chief
Read More

C. J. Hughes
No Comments
Image courtesy Richard Meier & Partners New Headquarters of Vinci Partners, Rio de Janeiro, Brazil. Click to view more images. Related Links: Richard Meier Tapped for Two W Hotels in Mexico Interview: Richard Meier Continuing a recent push into Latin America, Richard Meier has brought his taut and planar aesthetic to Brazil, where the New York architect has been hired to design a seven-story office in Rio de Janeiro. The boxy, 50,000-square-foot building, which is to be located one block from the beach in the trendy Leblon neighborhood, will become the new headquarters of Vinci Partners, a global investment firm.
Read More

Reorganize as a “B Corp” and Save the World

C. J. Hughes
No Comments
Photo © Josh Douglas Smith Vision Architecture designed the Camden Friends Meeting House, LEED-Platinum project completed in 2009. Many firms donate time to projects that do right by the world. Others want to contribute even more, but without jettisoning their business models and becoming all-out nonprofits. Related Links: Does “Doing Good” Pay the Bills? A possible middle ground: reorganizing as a benefit corporation, or “B corp.” While these companies earn profits and pay corporate taxes, they also pledge to act in an environmentally and socially responsible way. In some states, in exchange for their commitment, they are entitled to legal
Read More
Previous 1 2 3 4 5 6 7 8 9 … 13 14 Next
Subscription Center
More Videos