Jan-Carlos Kucharek
No Comments
Click on the slide show button to view additional images. A state-of-the-art headquarters for China CITIC Bank designed by Foster + Partners is starting to rise along the banks of the Qian Tang Jiang river in Hangzhou. The building, designed in collaboration with East China Architectural Design Institute, will serve as a high-tech landmark in a new business district that is taking this ancient city into the 21st century. Construction workers broke ground for the project in March, 2011 and are now sinking pilings for the foundations of the 63,000 square-meter, 20-story steel structure. The design of the 100-meter-high building
Read More

Jan-Carlos Kucharek
No Comments
Photo ' Richard Bryant/www.arcaid.co.uk Related Links: UK Theater Marks Significant Milestone for Viñoly Viñoly and Kimmel Center Settle Discord The New Domino In London, Futuristic Plans for an Old Power Station It has been eight years in the making, come in more than $15.8 million over budget, and been mired in litigation throughout its construction, but Rafael Viñoly’s $44.3 million arts center in Colchester, England, will finally open its doors on September 25.  The “Golden Banana,” as it has been dubbed by the townspeople, is a 41,000-square-foot copper-and-aluminum-clad facility built for the arts organization Firstsite. The Colchester council hopes the
Read More 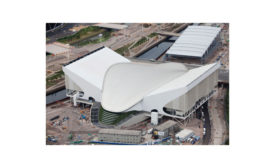 With its temporary wings and 3,000 tons of structural steel, Zaha Hadid's Olympic Aquatics Centre opens in London to mixed reviews.