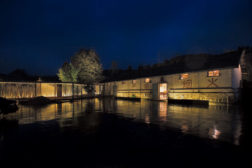 Cultural Revolution: A rural village finds new purpose by converting an old granary into a museum and community center.
Aric Chen
No Comments

A rural village finds new purpose by converting an old granary into a museum and community center.

Expanding the definition of architectural work, a husband-and-wife team engages the public in projects ranging from installations to events.
Aric Chen
No Comments
Hosting a dinner for 2,000 senior citizens or teaching 200 children to plant a garden is not most people’s idea of what constitutes architecture.
Read More

A nonprofit firm tackles the needs of China's forgotten countryside, designing projects that help communities come together.
Aric Chen
No Comments
Often lost among the headlines about China's astonishing development—not least those covering its government's latest proposal to urbanize an additional 400 million people over the next decade—has been a growing interest in the corresponding transformation of the Chinese countryside.
Read More

Inserting a precisely detailed retreat for art into a high-rise building in the middle of bustling Hong Kong required some extraordinary measures.
Aric Chen
No Comments

Inserting a precisely detailed retreat for art into a high-rise building in the middle of bustling Hong Kong required some extraordinary measures. In a city like Hong Kong that's largely shaped by its density—where space is tight and often has to be improvised—you can wind up with surreal results.

Aric Chen
No Comments
Neither Venice nor architecture is particularly known for its nightlife, but the opening days of this year’s Venice Architecture Biennale offered ample excuses for loosening one’s collar. Former OMA architect Ole Scheeren's floating "Archipelago" hosted a screening of a film about, well, Ole Scheeren. A torrential downpour on Sunday didn’t keep a diehard crowd away from the Venice home of Washington lobbyists and art collectors Heather and Anthony Podesta, where Henry Urbach was being toasted as the new director of the Glass House, Philip Johnson’s former estate in New Canaan, Connecticut. “Please eat,” the hostess vigorously implored guests including architects
Read More

Aric Chen
No Comments
Our intrepid correspondent picks some of his favorite offerings from the national pavilions at this year's Biennale.
Read More

Aric Chen
No Comments
Aric Chen digs through the multiple layers of David Chipperfield's Common Ground exhibition in our first post from Venice Anupama Kundoo's Feel the Ground. Wall House: One to One at the Arsenale Despite beginning and ending with gusts of rain, yesterday’s first day of previews at the 13th Venice Architecture Biennale mostly cast a sweltering sun over Common Ground, the main exhibition at the Arsenale. At first reckoning, the theme, chosen by exhibition director and UK architect David Chipperfield, doesn’t sound all that different from Kazuyo Seijima’s intriguingly prosaic People Meet in Architecture from 2010. But while Seijima’s Biennale will
Read More

Aric Chen
No Comments
Zaha Hadid's proposed aerodynamic, scrolling form. According to multiple sources, Jean Nouvel has been selected to design a mega-sized new building for the National Art Museum of China (NAMOC) in Beijing. If reports are true, the Pritzker Prize–winning French architect has beat out Frank Gehry and Zaha Hadid to snag the highly coveted commission. One well-placed source (who, like others, asked not to be identified because he was not authorized to speak on the record) says all three architects were informed of the decision on July 18. The source added that an official announcement will not come until November, after
Read More

The art world debunked the myth of the neutrality of the white-box gallery long ago.

Aric Chen
No Comments
The Beijing National Stadium Photo © John Gichigi After the Deluge How have past Olympic cities measured up for reuse, post-Games? Barcelona Now Athens Now Sydney Now Atlanta Now China's powers that be probably wish it wasn't Ai Weiwei—the artist, activist, and, after his nearly three-month detention by Chinese authorities last year, international cause célèbre—who collaborated with Herzog & de Meuron on the design of Beijing's Olympic National Stadium. But at first glance, the Bird's Nest, as it's better known, is the gift that keeps on giving: Four years after the Beijing Olympics, crowds still flock to the Olympic Green
Read More
Previous 1 2 3 Next
More Videos