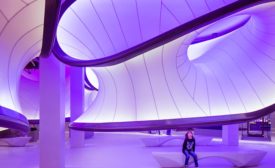 The leaders of ZHA assess the firm’s prospects one year after the founder’s death.

Christopher Turner
No Comments
Photo © Nigel Young/Foster + Partners Foster + Partners’ Langley Academy, with its curved facade, would not be sanctioned under new rules. Michael Gove, Tory member of Parliament and the U.K.’s secretary of state for education since 2010, has declared a controversial war on “curves or ‘faceted’ curves” in school buildings—as well as “minimal indents, ‘dog legs,’ and notches in the plan shapes.” Folding partitions, glazed walls, roof terraces, and ETFE roofing are also banned. In a series of new Design Templates for prototype schools published at the beginning of October—a document intended to steer architects bidding for $4 billion
Read More

Raising the Bar in Brixton: Winner of the 2011 Stirling Prize, this daring charter school aims to bridge architectural and social divides in a regenerating historic neighborhood.
Christopher Turner
No Comments

Set back from the road, Zaha Hadid's Evelyn Grace Academy in South London zigzags across its small site with jagged angles of bare concrete, glass, and silver-spray-painted aluminum.