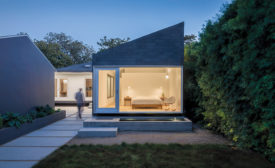 For a California-based architect, buildings are more than just structures—they're experiences that play on the visitor's senses. 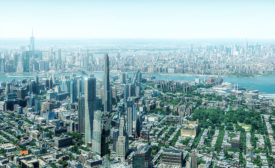 A mixed-use development proposed for Flatbush Avenue in Downtown Brooklyn is met with furor from neighbors, decrying the “Manhattanization” of the area. 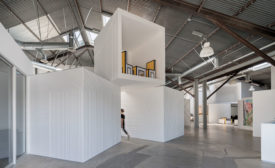 This bicoastal team’s distinctive designs are informed by an interest in cellular structure and graphic patterning.

Cara Greenberg
No Comments
Image courtesy El Puente Organizations such as Brooklyn’s El Puente will benefit from New York’s proposed cultural plan. When people call New York a cultural capital, they’re probably thinking of the Met, Lincoln Center, Carnegie Hall—not El Puente, a South Williamsburg–based center for Latino arts and culture, or Arts East New York, a hive of visual and performing arts in Brooklyn. That may soon change. Such less known but vital elements of the city’s cultural life will get a boost—as will arts education in public schools and individual artists—when legislation mandating the creation of a comprehensive citywide cultural plan, passed
Read More

Someone’s got to do it, if New York City is to have well-maintained parks beyond destination showplaces like Central Park and the High Line—and his name is Geoffrey Croft. Crain’s called him “an army of one.”

Cara Greenberg
No Comments
Brouhaha over development near Grand Central Terminal could be an object lesson for other cities. Image courtesy KPF Looking north from 42nd Street up Vanderbilt Avenue, One Vanderbilt is on the left and Grand Central is on the right.﻿ Grand Central Terminal, now polished and celebrated, has suffered many indignities since its 1913 opening on 42nd Street and Park Avenue. The two most notorious: having the monolithic 59-story Pan Am (now MetLife) Building wedged between it and the distinctive 1929 New York Central (now Helmsley) Building just one block north, in the early 1960s; and Donald Trump’s late ‘70s transformation
Read More

Sarasota Scrambles to Save its Unique Brand of Regional Modernism

Cara Greenberg
No Comments
Paul Rudolph's Sarasota High School—a boldly conceived 1958-60 addition to an older building, with folded concrete planes that emphasize the play of light and shadow—is being restored. Sarasota’s preservation community is feeling the pressure. With no ironclad protections in place, the Gulf Coast Florida city—which, thanks largely to Paul Rudolph, who maintained a presence there from 1941 until 1962, became an epicenter of architectural ingenuity—is in a race to save what’s left of its repository of significant mid-20th century homes, schools, and churches. Among the fallen: Rudolph’s elegant, skeletal steel Riverview High School, designed in 1958 and demolished, after an
Read More
Subscription Center
More Videos