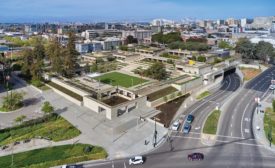 Born to Design: A couple from the San Francisco Bay Area advanced the cause of modernism using architectural and graphic expertise.
Kenneth Caldwell
One Comment

Charles and Ray Eames may have been the most famous Midcentury Modern design pair in the Americas, but they were not the only professional couple who contributed to its development.

Kenneth Caldwell Ron Nyren
No Comments
Photo courtesy ELS Barry Elbasani Barry Elbasani, FAIA, an architect whose master plans and buildings were frameworks for revitalizing downtowns throughout the country, died on June 29, 2010, at his home in Berkeley, California. He was 69.The cause of death was brain cancer. Elbasani, one of the founding principals of ELS Architecture and Urban Design in Berkeley, was responsible for major buildings and plans in Milwaukee, Portland, Oregon, Phoenix, Summerlin, Nevada, Los Angeles, Austin, and Coral Gables. Grounded in a belief that architecture and urban design were interdependent, his designs drew on the principles of thriving urban streets. Elbasani and
Read More
Subscription Center
More Videos