An integral part of Manhattan’s Stuyvesant Square Historic District, Friends Seminary has been dealing with growing pains for decades, with an increasing number of kindergarten-through-12th-grade students sharing tight quarters in a disparate group of 19th- and 20th-century buildings. Now the campus has room to breathe, due to a meticulous renovation and expansion by Kliment Halsband Architect (KHA), completed last September, that treads gently on the old-world charm of its setting.

Bordered on the east by the verdant square, the independent Quaker day school, founded in 1786, still occupies one of three landmarked masonry buildings, reminiscent of Federal and Greek Revival styles, that the Society of Friends built here in 1860. (A meetinghouse and administrative building, also remain in use by the religious organization.) As with many city institutions, growth here was challenged by a tight real-estate market as well as the area’s city landmark designation in 1975, which limits construction. 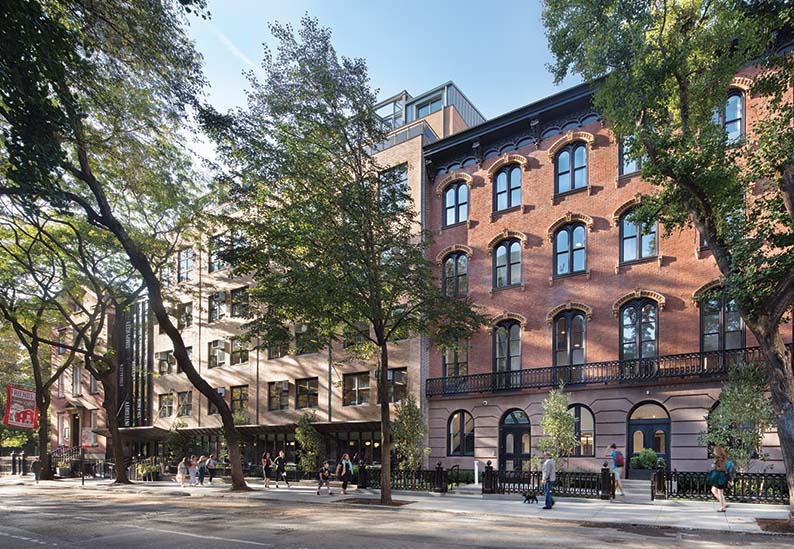 The new school connects to an existing 1960s Friends Seminary building, which the firm had raised from four to six levels plus a play roof. Photo © Vanni Archive, click to enlarge.

There has been some development over the years. In 1964 (before the landmark designation), two of eight 1852 Anglo-Italianate row houses, west of the original school house, were razed to build Hunter Hall, a four-story building by Chapman, Evans and Delehanty that created a campus quadrant around a rear courtyard. In 2006, architect Margaret Helfand was allowed to insert a small vertical core that connected Hunter Hall and the 1860s complex and created a steel-and-glass lobby and new library.

By 2014, Friends Seminary had bought three additional townhouses and linked them to each other provisionally until funds and approvals could be acquired for a proper addition. According to KHA principal Frances Halsband, “The buildings were horrible.” None of the floor levels aligned and the facades were in disrepair. Charged with renovating these properties and the 1960s building to provide flexible, accessible space, making seamless transitions among them, Halsband recommended restoring the landmarked brick facades but demolishing everything behind them to build a single structure. The design team then developed a two-phase scheme that would allow the school to operate throughout the project while more than doubling the size of the facility, with a generous addition for the middle and lower schools in Hunter Hall and a distinct upper school in the townhouses. 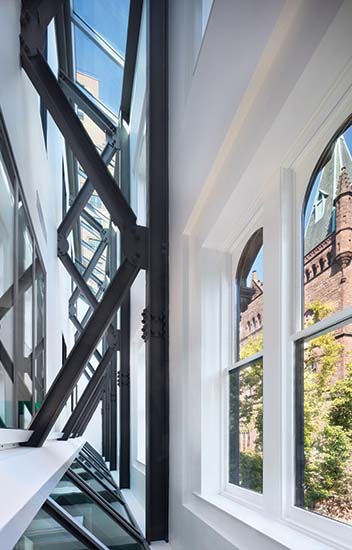 Working with structural engineer Silman, the architects first added a play roof and two classroom floors to Hunter Hall, which would serve as swing space during Phase 2. “We wanted to minimize demolition inside Hunter Hall, so the structure behind the townhouse facades actually contains most of the lateral support system for both buildings,” explains senior project engineer Jim Villano. “But we had to build the addition on top of Hunter Hall first—so we also put temporary lateral braces at the front and back of that building.” To further reduce impact on the existing school building’s operation during construction of the new upper floors, the crew reinforced its perimeter columns from the exterior, accessing them by removing slender portions of the brick on the north and south elevations. Likewise, they used full-story trusses on the new fifth and sixth floors, to limit disrupting the existing space on the fourth. Once this work was near completion, the permanent global lateral system of moment and brace frames was erected within the townhouses, and the facade and a neighboring party wall, west of the school, stabilized with broad concrete bench footings and temporary shoring at the facade for the restoration and construction.

The revived 19th-century facade appears as it must have more than 150 years ago but conceals a fresh 29,000-square-foot upper-school wing that, like Hunter Hall, tops out at approximately 70 feet, more than 5 feet below the maximum height for this landmarked area. It, too, rises to six stories but is crowned on the roof with a greenhouse instead of a play space. To comply with New York City setback requirements, the additions gracefully step away from view and are virtually invisible at street level. The new structure is also about 5 feet behind the historic facade, which is supported by a series of vertical trusses in the interstitial space. Visible through windows in adjacent internal walls, this impressive bit of engi­neering is meant to inspire the school’s 780 students. A sloped skylight at the top transmits daylight down through that narrow volume and adjacent interior spaces. “At night,” says the school’s principal, Bo Lauder, “It emits a cheerful glow from within the building.” 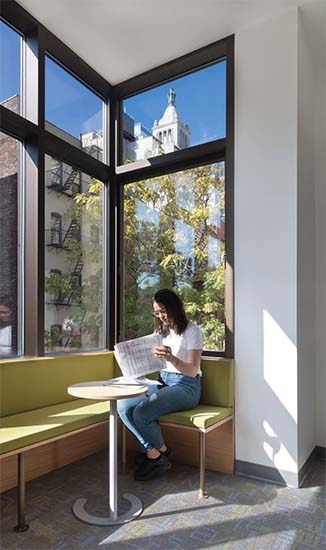 For the new upper school of 282 students, Halsband exploited every inch available to her. She used Collaborative for High Performance Schools criteria (or CHPS, a national program to improve learning environments) as a design standard for enhanced building sustainability and occupant well-being. The entrance, accessible by a gentle gradient outside, opens to a terrazzo-clad lobby. Inside, the floors are organized around a new stairwell and elevator core at the juncture of the old and new wings. Taking advantage of zoning that permits community-facility projects to be built within the rear yard of a lot, the architect filled out the site with a near-22-foot-high extension at the ground floor. The 30-foot-wide by 63-foot-long columnless space is used for school-wide music, dance, and theater classes, while an operable, impact-resistant glass wall on the courtyard opens for indoor/outdoor assemblies and events. On its roof, a garden terrace, supported by beefy steel trusses and beams and bolstered by acoustically isolated slabs, gives the older students a peaceful outdoor setting for studying or hanging out. Located off the third floor, this 2,000-square-foot patio is accessed through a new upper-school commons (or lounge) inside. A series of bays, clad in zinc, punctuate the rear of the building, referring to the area’s rowhouses and creating cozy interior nooks in classrooms. 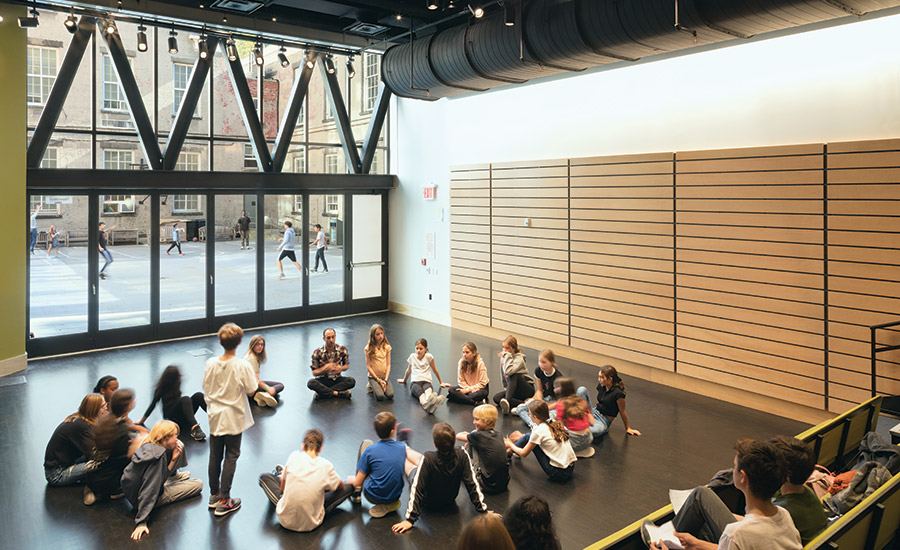 The Great Room (3) opens onto a courtyard (4). Photos © Vanni Archive 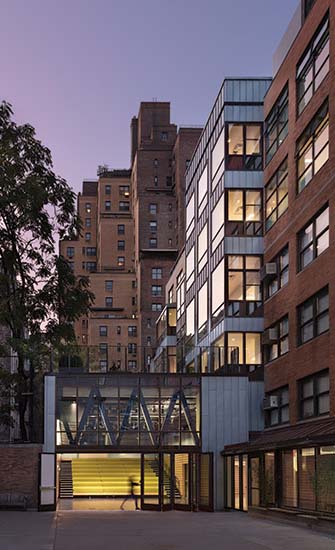 During a school tour, the teens were lounging in the commons or mingling at their lockers, which overlook the facade. There was a cheerful sense of calm in the ample space, and Lauder seemed delighted: “For two years we were all in one building—pretty tight. Now it feels as if I could see a tumbleweed coming down the hallway.” 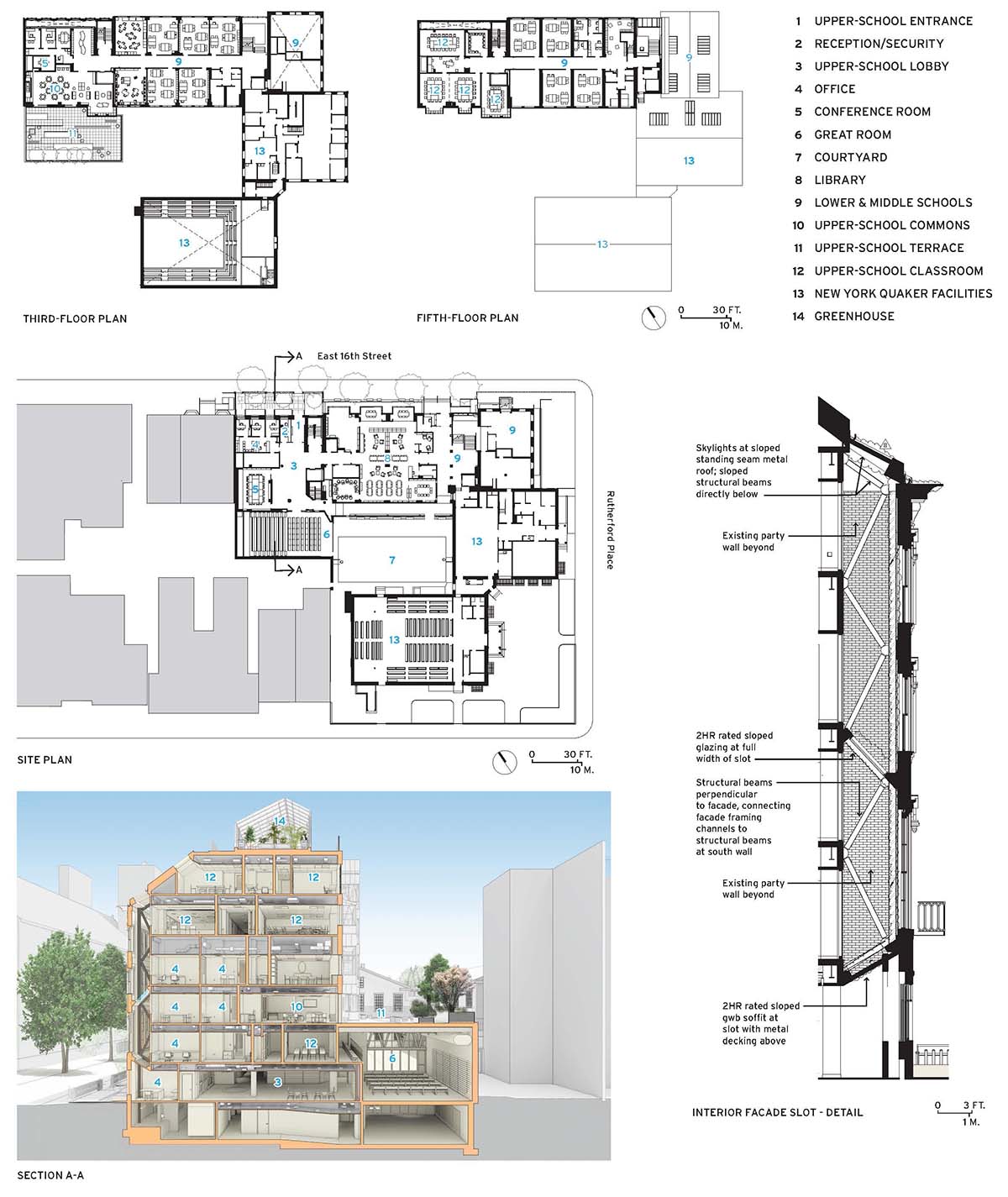