Over the years following World War II, in which Skidmore, Owings & Merrill (SOM) rose to prominence, its architecture was largely identified with an astute deployment of steel, concrete, and glass using a Miesian vocabulary. Now the firm is showing it can exercise the same finesse with timber as the structural solution. This natural material composes 80 percent of the new Billie Jean King Main Library in Long Beach, California—named for the legendary tennis player who grew up there and presided over the building’s dedication last September. The design solution—a long, rectilinear framework of glass and reddish Douglas fir—offers a fitting homage to the athlete famed for the power of her serves and the efficiency of her ground strokes and volleys.

Wood made sense for the new two-story, 93,500-square-foot building, explain Paul Danna and José Luis Palacios, design partner and design director, respectively, in the Los Angeles office of SOM, since the city wanted to keep intact an existing underground parking garage on the site. A timber framework for the library could sit lightly on the garage’s concrete columns, and by reusing 85 percent of that existing structure, material waste for the new project would be reduced by 65 percent. On top of this sustainability strategy (see chart below) is the advantage that the warm tones of the natural material avoid the cold, institutional look of so many contemporary public buildings. “Wood adds instant character to the complex,” says Palacios. 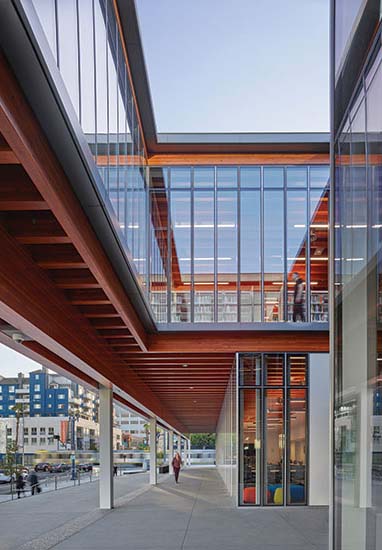 At the entrance, a two-story light well opens to the sky and illuminates each floor. Photo © Benny Chan/Fotoworks, click to enlarge.

The library especially needed to attract the community with an inviting space, as the outdated former library, built in the 1970s, looked like “a closed bunker,” in the words of Special Collections librarian Jeff Whalen. “Now the library is filled with light,” he adds, pointing to the generous glazing supplementing the wood.

In these days of digital dependency, the staff also did what so many libraries now do—it opted for a rich program of varied activities in which reading and browsing though books is only a small part of the agenda. To lure local residents inside this precinct, the library staff asked for a family learning center, a children’s reading room, a veterans’ resource center, and a cluster of multipurpose community rooms with its own separate entrance. The library also has makerspaces with capabilities for 3-D printing and robotics, and even film editing. And, not to be forgotten, 300,000 books do occupy the shelves. 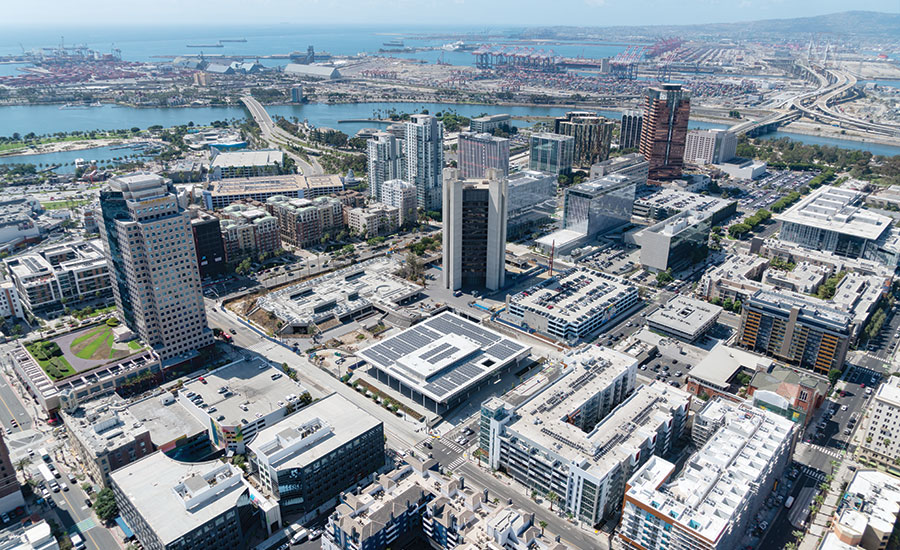 The library is located in the northeast corner of the civic center (at center). Photo © Ethan Rohloff

Since Long Beach, a booming port city about 25 miles south of Los Angeles, receives abundant sun, the architects designed the low-rise building’s flat roofs—fitted out with a battery of 1,590 photovoltaic modules—with deep overhangs for the expanses of glazed walls. The canopy on the south facade juts out 32 feet, where an entrance overlooks Lincoln Park—undergoing substantial landscaping on the site of the former library, now being razed. Visitors will be able to enter from the park on the south, near the downtown civic center, but for the time being they come in on the opposite side, where an expansive wood-framed “porch” faces a residential neighborhood. To help identify the entrance within this expanse, the architects have carved out a dramatic two-story light well, open to the sky, which you pass through to enter the main space.

Inside, SOM has organized the various spaces around a 39-foot-high atrium with clerestory windows at the top of the second level. Because of the daylight suffusing the interior, the amount of electric lighting needed is reduced. 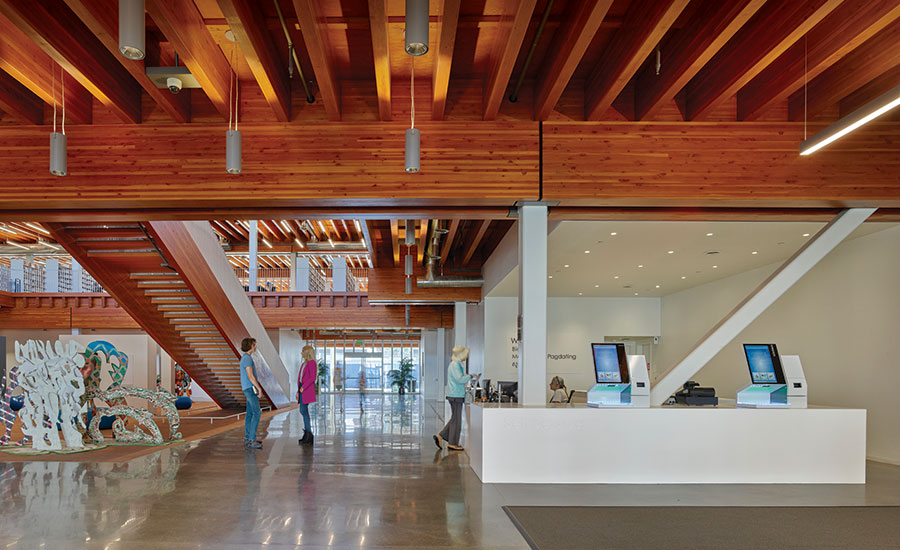 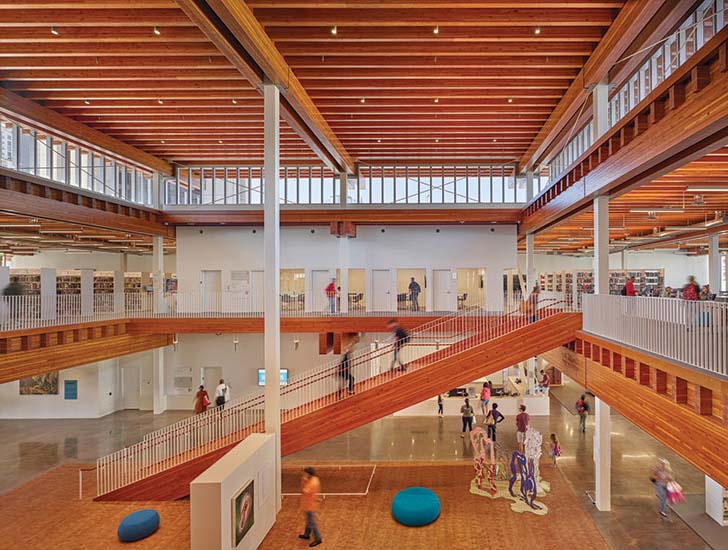 Beams, joists, girders, and blocks of stained Douglas fir are boldly expressed in the lobby (1) and the atrium (2). Photos © Benny Chan/Fotoworks

Yet despite all the transparency and luminosity of the interior spaces, it is the exposed wood structure that steals the show. SOM has treated the various parts and pieces of the library as if they belonged to a Japanese temple: the wood glulam beams, joists, and blocks between the joists create a Constructivist interplay, emphasized by the timber girders that penetrate the glass curtain wall. To heighten the sense of precision, the architects employed a 2-foot module for both the curtain wall and the structure.

SOM chose a red-stained Douglas fir for the mass-customization of prefabricated components, with most of the wood coming from Oregon and the rest from Washington state. (A hardwood scientist assisted with the complex process of fabrication, delivery, and installation.) By using wood and the existing foundation, the architects estimate they cut the embodied carbon by 61 percent, compared with erecting a new parking garage and a conventional concrete building. 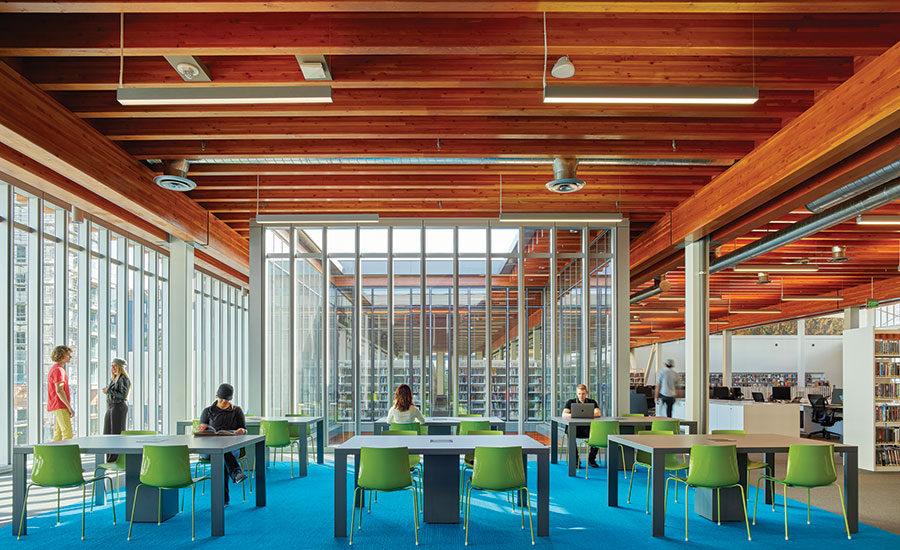 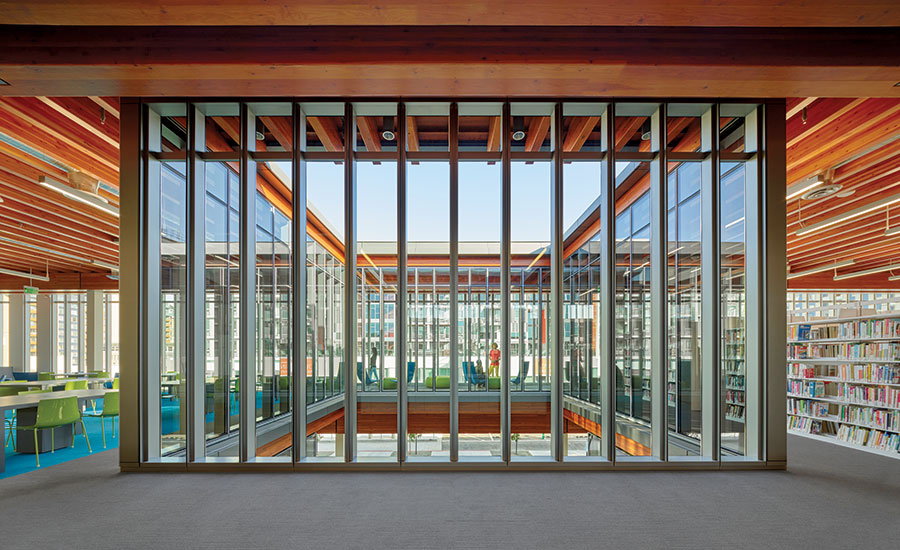 A two-story light well near the north entrance admits daylight to both the main floor (3) and the second level (4). Photos © Benny Chan/Fotoworks 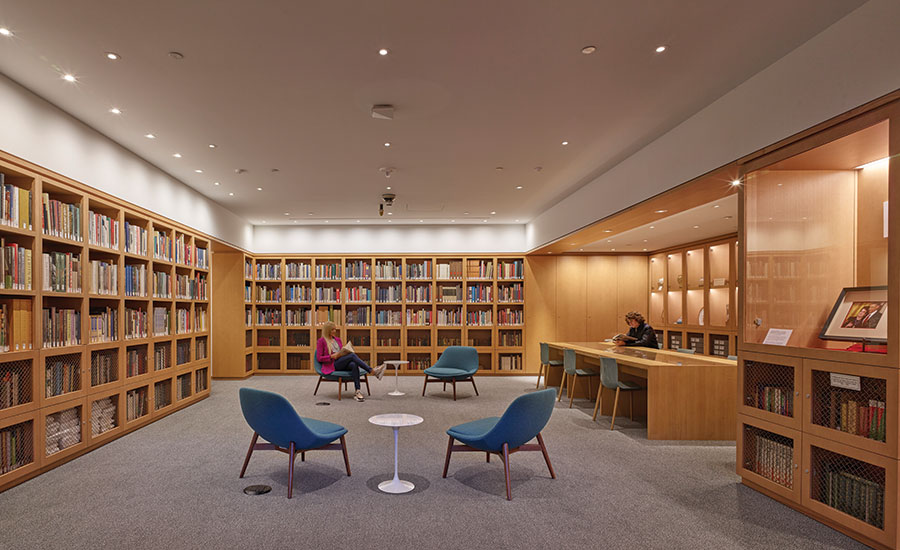 To protect the special collections room on the main floor from daylight, SOM enclosed it in ash wood paneling. Photo © Benny Chan/Fotoworks

But not everything here is wood. To resist lateral seismic movement, the team installed V-shaped steel supports, aided by a grid of square steel columns filled with concrete. In addition, on the west facade, where there is no overhang, the architects cut the solar load by making the curtain wall more opaque by virtue of an aluminum vertical plank system, alternating with strips of glass. The overall result is a library where you feel as if you are in an expansive pavilion, with views opening up through the interiors and soft illumination permeating the reading rooms, studios, and stacks. 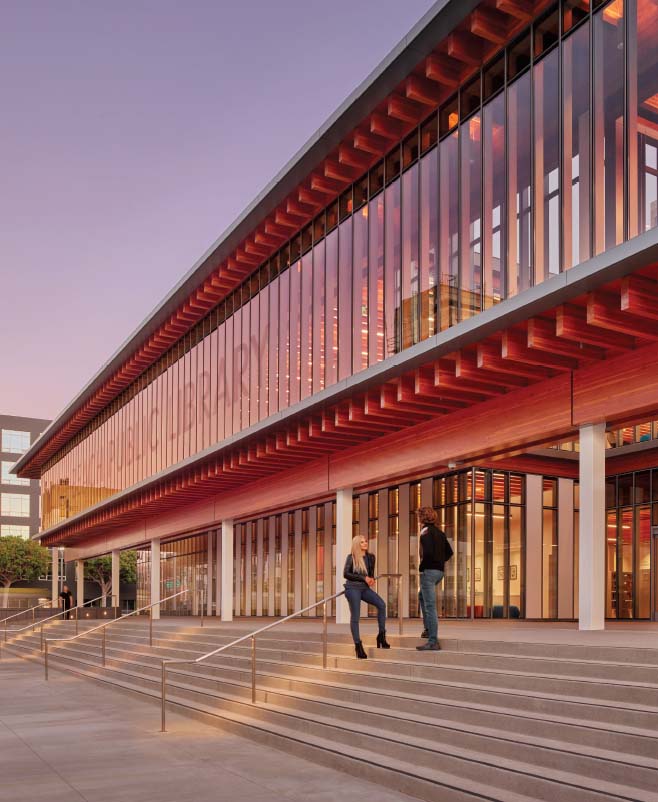 The library is part of a 22-acre civic-center redevelopment, which SOM master-planned in 2014. (The firm recently completed the City Hall and Port Headquarters.) A few gangly, mediocre buildings—by other architects—still remain, awaiting their fate.

In Long Beach and beyond, SOM is keeping its signature vocabulary of modernist modular structures of steel, concrete, and glass intact. At the same time, it is working to address climate change—and giving wood a prominent role in its architecture, already anticipated by its Timber Tower Research Project, first announced in 2013. Its goal has been to use mass timber as a main structural material to reduce a tower’s embodied carbon footprint. The Billie Jean King library’s bold muscular framework, with its preponderance of wood, continues the firm’s legacy while introducing a renewed vibrancy to the general conversation. An inviting new beacon for the downtown, the library proves a building needn’t be a tower to be noticed. 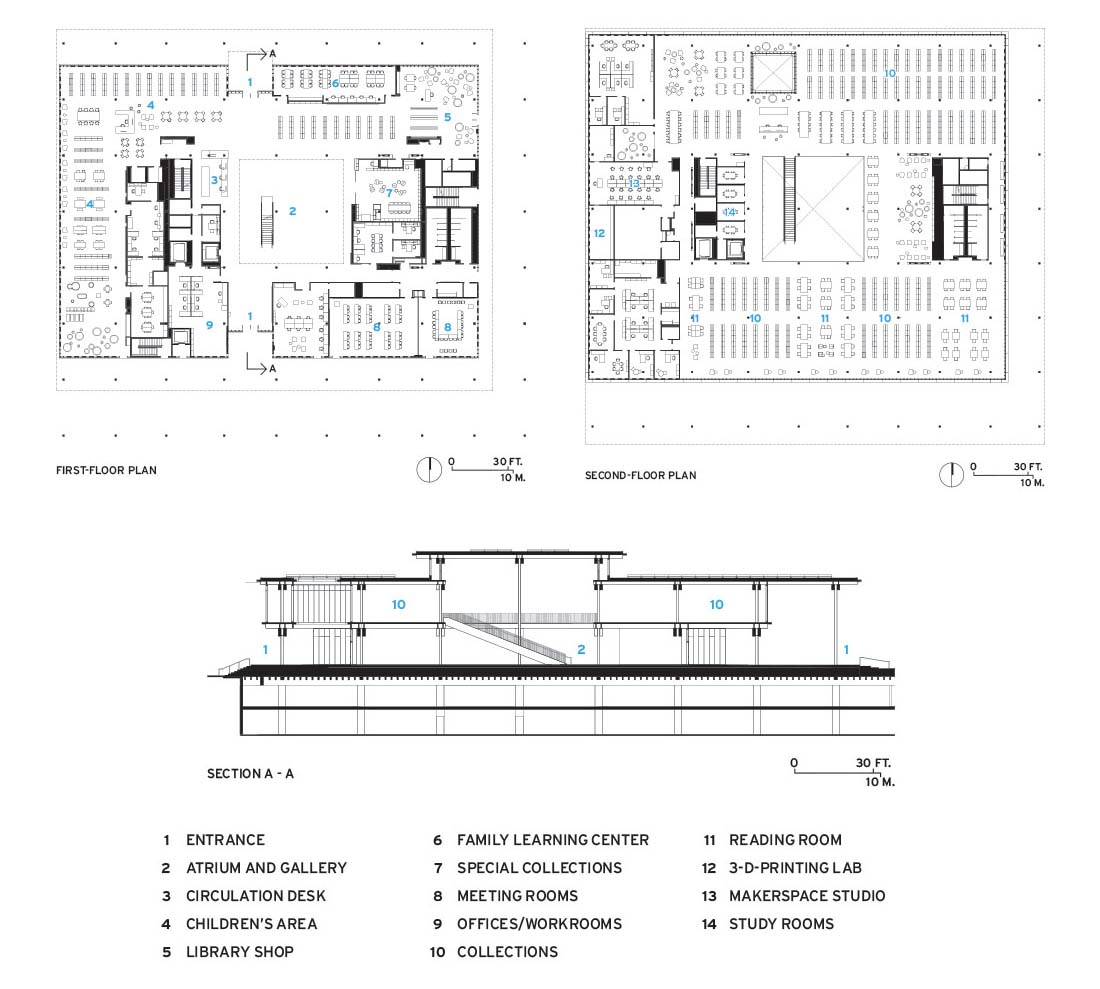