Skyscrapers designed by Skidmore, Owings & Merrill (SOM) don’t show an obvious family resemblance—the venerable firm’s tall buildings are formally diverse. They include Chicago’s Willis Tower (1974), the Miesian office building previously known as the Sears Tower and made up of square “bundled tubes,” and the Burj Khalifa, in Dubai—still the world’s tallest tower 11 years after completion—with its seemingly spiraling pinnacles buttressing its core. But despite the aesthetic range, SOM buildings do have a common thread of DNA, says Gary Haney, design partner for One Manhattan West, a recently completed 67-story office building on New York’s far West Side. “It is impossible to invent shapes without thinking about structure,” says Haney, now a consulting partner of SOM. “It is part of our ethos.” 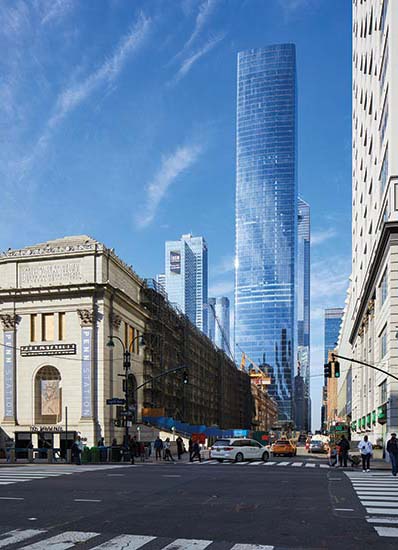 On the skyline, the tower appears as a refined shaft. Photo Lucas Blair Simpson © SOM, click to enlarge.

One Manhattan West is definitely the progeny of this philosophy, but just how so is not apparent from afar. On the skyline, the 996-foot-tall tower appears as a straightforward though refined shaft—an extrusion of repeated rectangular floor plates within a taut glass skin. From closer range, its rounded corners come into view, and one can see that its east-facing facade gently bows, and slopes back, creating a profile that subtly tapers toward its crown. However, the SOM genes truly reveal themselves where the building meets the ground. Here there are no perimeter columns. So, even without entering, passersby can look beyond the ultratransparent, mullionless enclosure (supported only with structural glass fins) into the lobby, taking in its main event: a muscular pedestal-shaped element at the center, clad in striated travertine, that gracefully flares outward toward the 45-foot-high ceiling. 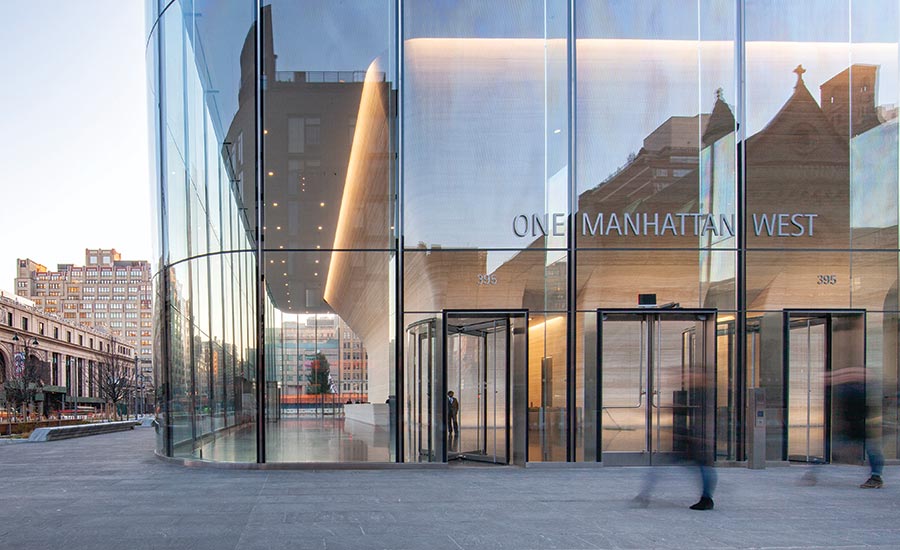 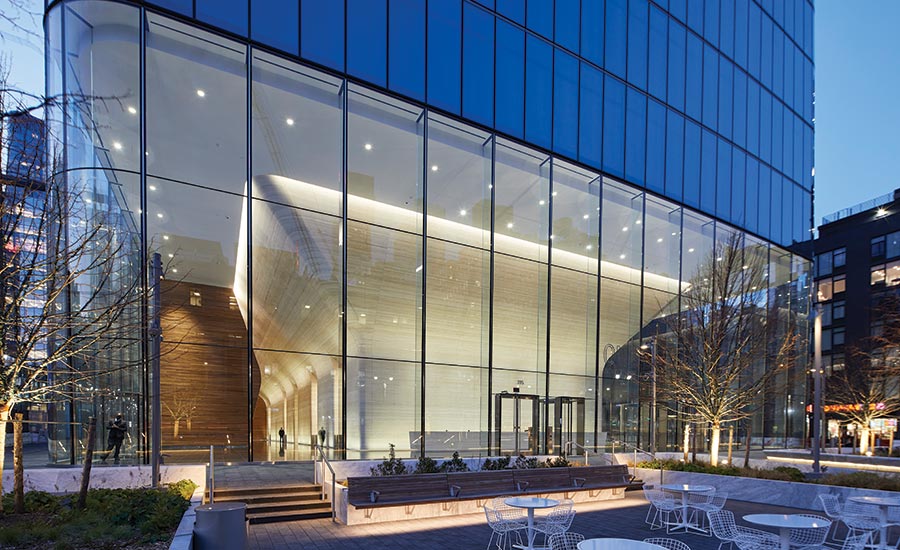 The travertine feature is more than a sculptural conceit. Behind the stone (quarried, milled, and installed so that its veins seem continuous, even around corners) is the building’s reinforced-concrete core, with walls up to 4 feet thick, and a robust framework of steel diagonal “kickers,” each 75 feet long. These transfer the loads from the perimeter columns on the floors above through the core and to the foundations. The structural gymnastics are a direct response to the conditions below grade, where there was limited available terra firma on which the tower could touch down. The building sits on foundations representing only about 30 percent of its footprint. “It is as though it is standing on tippy-toes,” says Kim Van Holsbeke, an SOM design director. 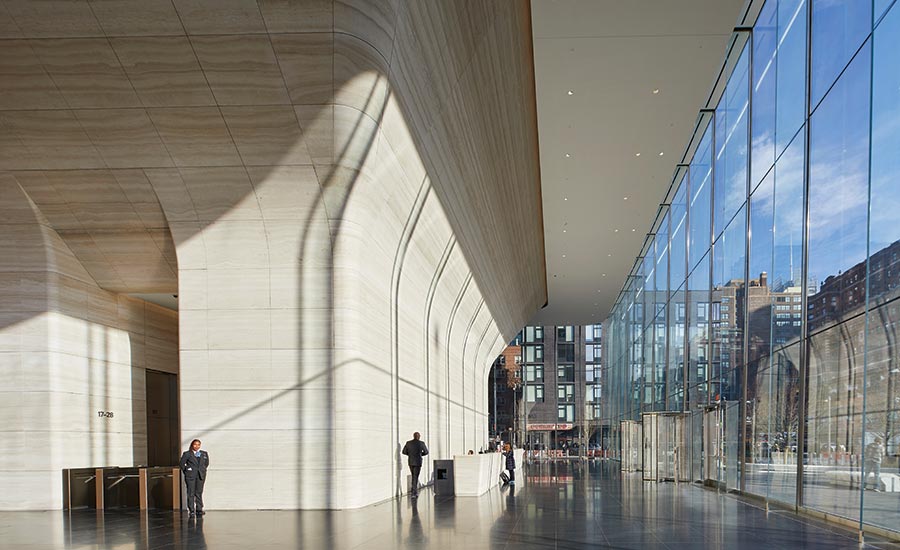 With no perimeter columns at the ground, the glazing is supported by structural glass fins that nearly disappear. Photo Lucas Blair Simpson © SOM

So little bedrock was accessible because the tower, as well as the surrounding eight-acre Manhattan West complex, is built over active passenger rail lines that connect to nearby Pennsylvania Station. The nearly complete $4.5 billion development—which sits between the James A. Farley Post Office recently trans­formed by SOM into Moynihan Train Hall and the mega-development Hudson Yards—encompasses 7 million square feet of office space, apartments, hotel rooms, restaurants, and retail in six buildings, four of which were designed by SOM, which also created the master plan. 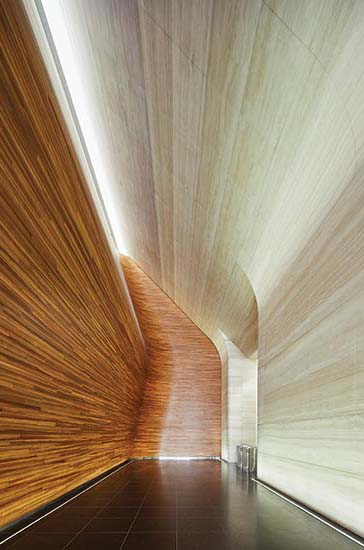 Developed by Brookfield Properties, Manhattan West has been a long time in coming. Olympia & York, a Brookfield predecessor company, acquired the first parcel of land in 1985. Sabrina Kanner, then just starting her career at Olympia & York and now Brookfield’s executive vice president of development, design, and construction, says she was “just a kid in steel-toed boots” and did not see the potential of what was then primarily a void over the train tracks with some at-grade parcels used mostly for parking. But she now describes the emerging complex as a pedestrian-­friendly neighborhood, a “people place.” Toward that end, the developer has decked over Dyer Avenue—a vehicular approach to the Lincoln Tunnel that ran through the site—and, with the landscape firm James Corner Field Operations, created an event plaza and other outdoor spaces. By the end of 2022, the “spur,” a branch of the immensely popular elevated park the High Line, will be extended to meet Manhattan West. 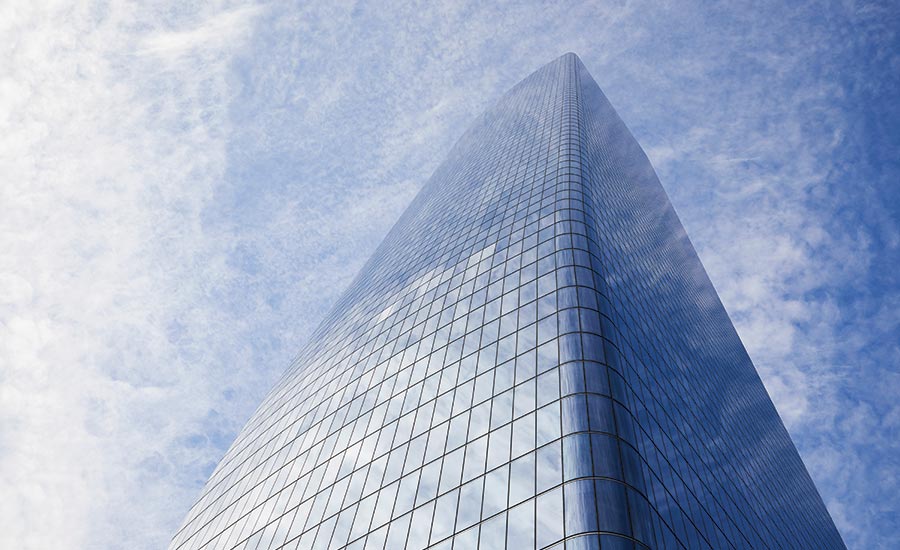 The taut skin is intended to make the building seem as though it were milled from stainless steel. Photo Lucas Blair Simpson © SOM

One Manhattan West was conceived as the centerpiece of the new neighborhood, along with Two Manhattan West, a slightly shorter office building at 912 feet tall and 60 floors, still under construction. Like its sibling, the second tower will have a tight glass skin and one tapering and bowing face, but the angled facade will be its north elevation instead of the east one. Together, the pair will mark either side of the events plaza, which sits directly across the street from the new Moynihan Train Hall. The towers make an “ensemble” and are “in dialogue,” says Van Holsbeke.

Despite their similarities, Two’s base will be quite different from that of One. Due to the particular arrangement of the tracks under it, the shorter building will have eight perimeter megacolumns at lobby level and a braced central core of steel, only half of which will reach bedrock. Below grade, one-story-tall trusses will redirect the building’s loads to available zones between the tracks, explains Charles Besjak, structural engineering director for SOM. And, as a reflection of its structural configuration at the ground level (and below), the architectural expression of the lobby will be distinct from that of One, with the steel-framed core clad in eucalyptus wood and the megacolumns in stainless steel. “While different, it will be equally dramatic,” promises Haney. 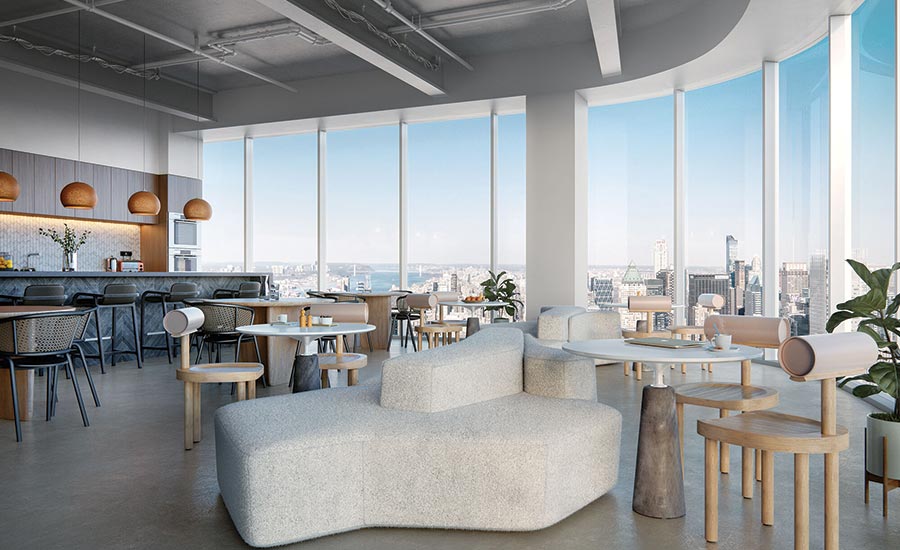 The envelope strategy yields office spaces with floor-to-ceiling glazing and, from the upper floors, sweeping views, as shown in a rendering. Image courtesy Brookfield Properties

Van Holsbeke says the aim is to make the towers appear almost as though they were milled from blocks of stainless steel, rather than clad in glass. At One, this effect has been achieved with a curtain wall of structural silicone glazing and a combination of flat and curved—but mostly flat—high-performance panels. The insulated glazing units (IGUs) for the building’s rounded corners were “hot bent” in the factory, while the few curved panels necessary to achieve the angle of the east facade, concentrated between floors 4 and 19, were “cold bent” on-site, during erection. The architects used parametric modeling extensively, both to visualize how many flat, faceted IGUs could be used and still achieve the appearance of a smooth and uninterrupted radius, and to understand the cold bending tolerances of the glass and the curtain wall assembly, explains Julia Murphy, an SOM managing director.

On the inside, the glazing strategy yields offices with floor-to-ceiling glass, and from the upper levels allows for sweeping views of the city, the Hudson River, and beyond. Coupled with 13-foot 6-inch slab-to-slab heights and a core-to-perimeter depth of about 42 feet, the approach yields daylight-filled, flexible office spaces that have proved appealing to a variety of tenants, including white-shoe law firms, accounting firms, and the National Hockey League. The building is 90 percent leased, while Two, slated for completion in 2023, has secured an anchor tenant for 13 floors, according to Brookfield’s Kanner.

Although pundits are questioning the post-pandemic relevance of the office building, especially now that many companies have shown that remote work can be effective, Kanner is optimistic about the market. She insists that there is no substitute for the creativity that in-person collaboration allows, and maintains that even if employers don’t require a return to the office full-time, workers will still need designated desks.

For the moment, it is unclear how strong the demand for office space in New York (and other urban centers) will be as restrictions ease. It is uncertain if and when tourists and workers will return and how soon the environment that Kanner describes, with people dining at the complex’s restaurants, shopping in its retail outlets, and meandering through its outdoor spaces, might materialize. But, whatever the future, One Manhat­tan West’s structural acrobatics and subtle curves make it an elegant addition to the city’s far West Side. 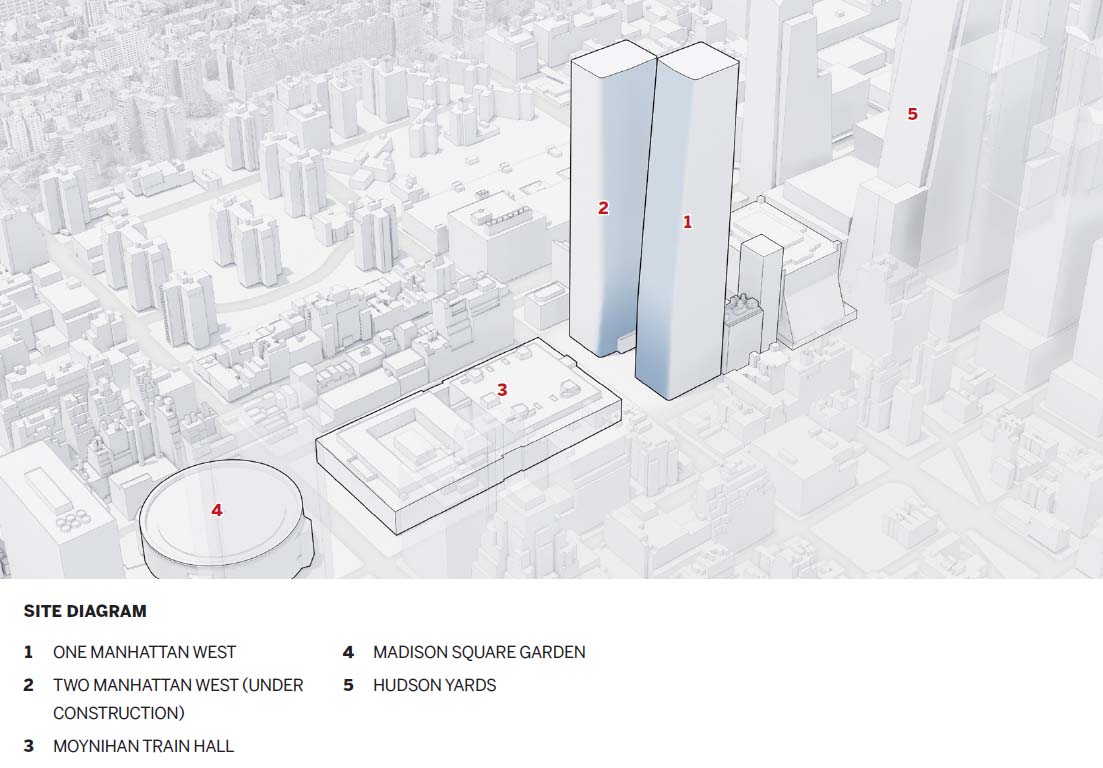 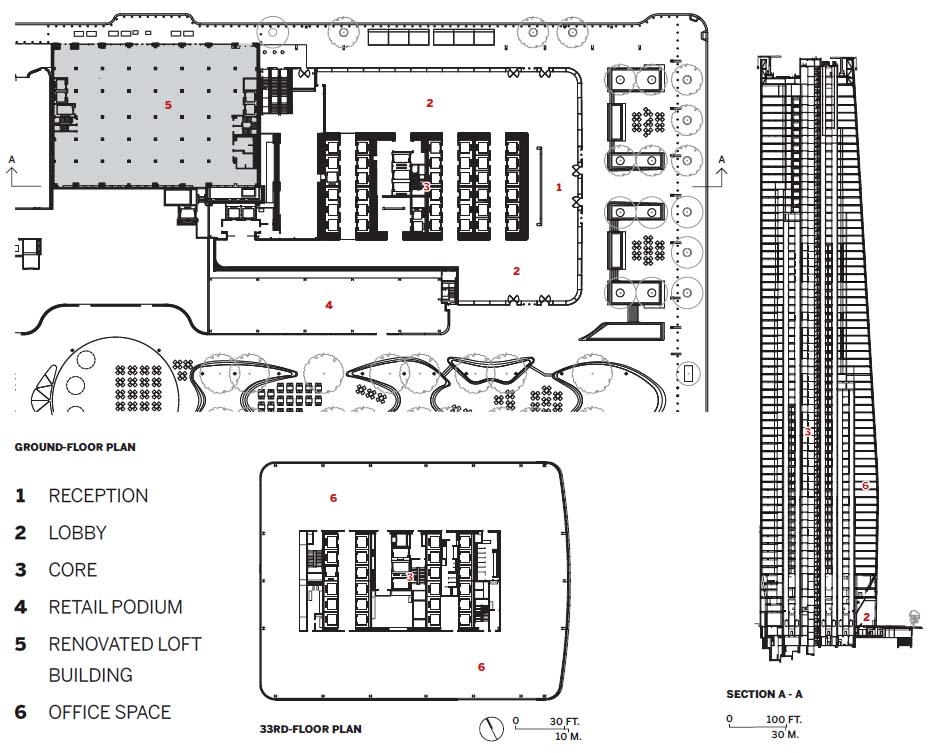 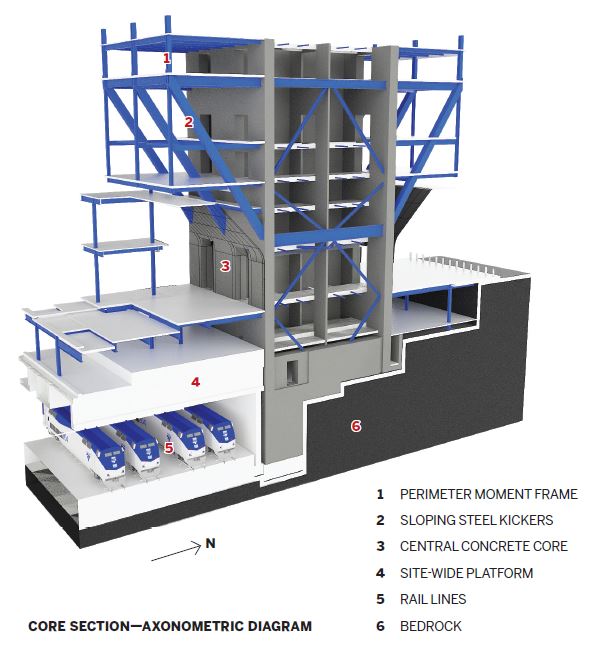