Charlottesville is not where Cassie and Carrington Guy expected to end up. The couple first hired architect Thomas Ryan in 2013—like them, he was then based in New York, just starting his own firm—to renovate a brownstone in Brooklyn they were looking to buy. When that didn’t materialize, they thought about building a small weekend retreat on Long Island instead. But again their plans changed. With their two young children craving the country life they experienced visiting their grandparents, and a work-from-home scenario becoming more feasible with Carrington’s new business venture, the Guys, both originally from northern Virginia, decided to plant roots near the hometown of Thomas Jefferson, founding father and self-taught architect. Ryan, now in San Francisco and designing residences and art galleries on both coasts, was thrilled at the expanded scope of the project, and helped his clients find the 45-acre rolling property on which they would build their 5,800-square-foot house. 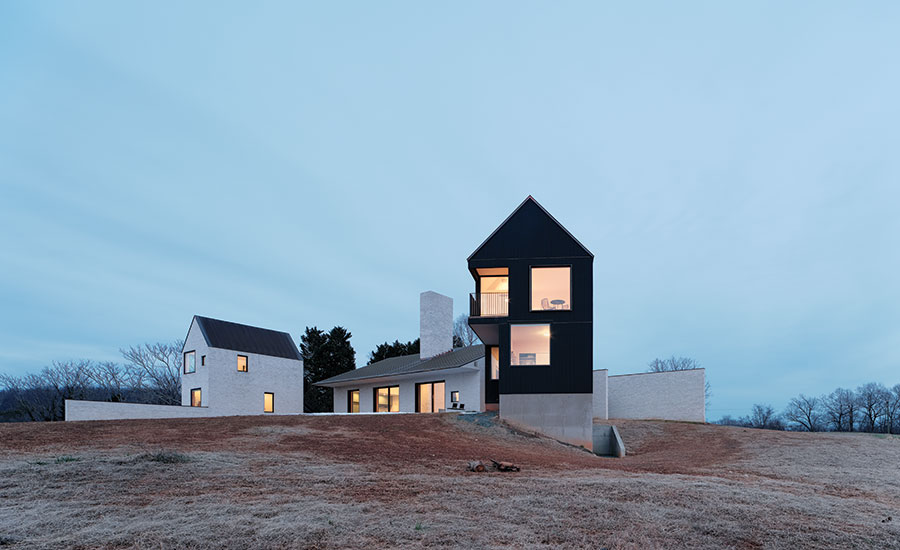 A native of bordering North Carolina, Ryan was familiar with not just the vernacular architecture of the area, but also its landmarks. The Guys, too, had a strong sense of the local heritage, with both sides of their families engaged in the unique preservation project at Menokin, farther east in Virginia, where the remains of a 1769 manor house are being encased in glass. They wanted a structure that built on that Southern legacy, but that was also distinctly contemporary.

For Ryan, the monumental chimneys that punctuated those lasting examples of colonial architecture—as well as the more recent precedent of Louis Kahn’s Korman House (1973) outside Philadelphia—became the defining element of this project. The three shafts here, one of which houses a pizza oven, are exaggerated in height, each reaching 35 feet and towering over a two-story bedroom wing to the south, a detached guest suite with an artist studio to the north, and a one-story living area in the center. 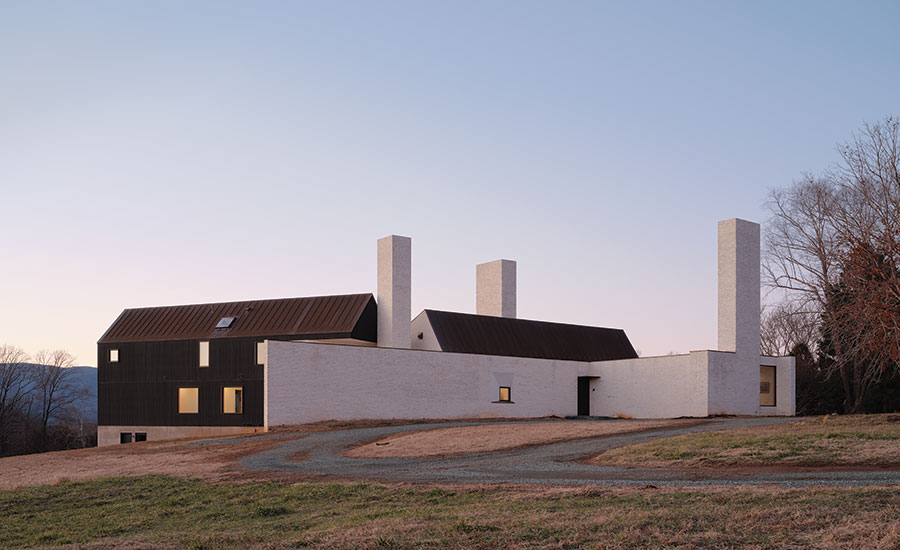 Inspired in part by Mies van der Rohe’s Brick Country House (1923), like another residence in this issue, the plan—somewhat U-shaped, with its south wing askew to optimize views of the Shenandoah Mountains to the west—has perpendicular site walls extending past the structure, acting as marks in the landscape. “It is a way to register the rolling terrain,” says Ryan. The inner spaces unfold along these trajectories as a series of intimate rooms—all with stunning views of the mountains and nearby horse farms. The grandness of the long, open kitchen, dining, living, and entertaining area, with a sloping ceiling that soars 23 feet, is itself broken down by one of the three chimneys at its center. Its traditional Rumford fireplace is in use several nights a week during the cold months. In warm months, sliding glass walls as large as 12 feet by 10 feet open completely to connect this most public of spaces to the exterior, where an outdoor dining area and pool are planned. 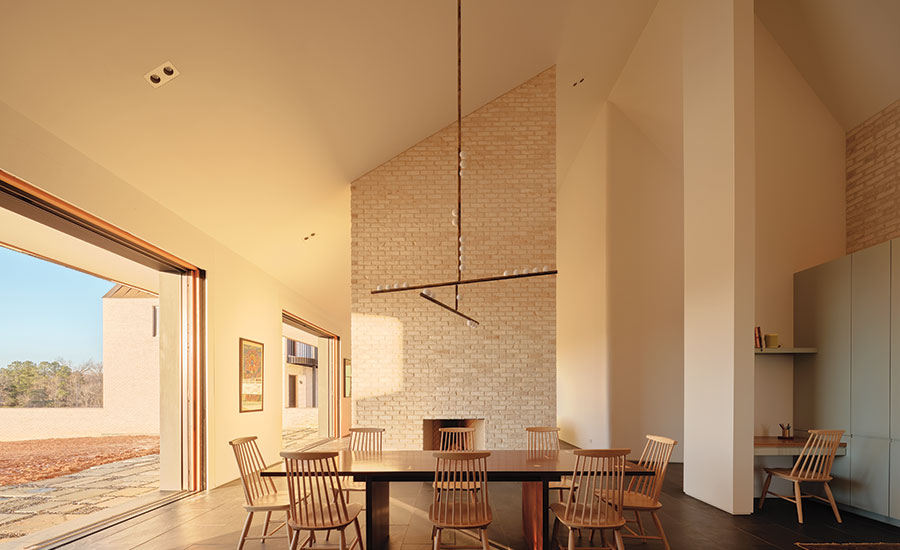 12-foot by 10-foot apertures in the kitchen and living area can be opened completely to offer connection to the outdoors. 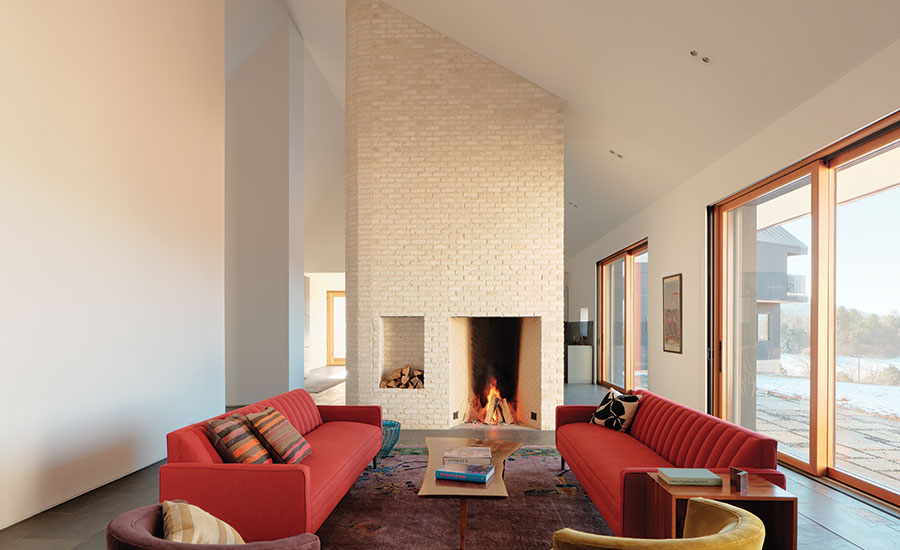 A Rumford fireplace is the centerpiece of the living room.

Like Mies’s unbuilt project, Ryan’s country house is brick. The standard-size units, white in appearance, were lime coated prior to firing in the kiln for a sometimes coarse, sometimes milky finish. In an application process that took some practice among the masons, mortar joints were left rough and flush to the face of the brick, emphasizing the mass of the surface instead of the individual blocks. Copper roofs—the seams on the lower 4 feet of which were hammered down to create a flat edge—cover the three pitched volumes, whose elegant proportions are similar to those of local barns. “It’s essentially the dimension of two cubes topped by a triangle,” says Ryan. The black cedar used for many of those barns also clads the bedroom wing, differentiating that more private section from the rest of the house. 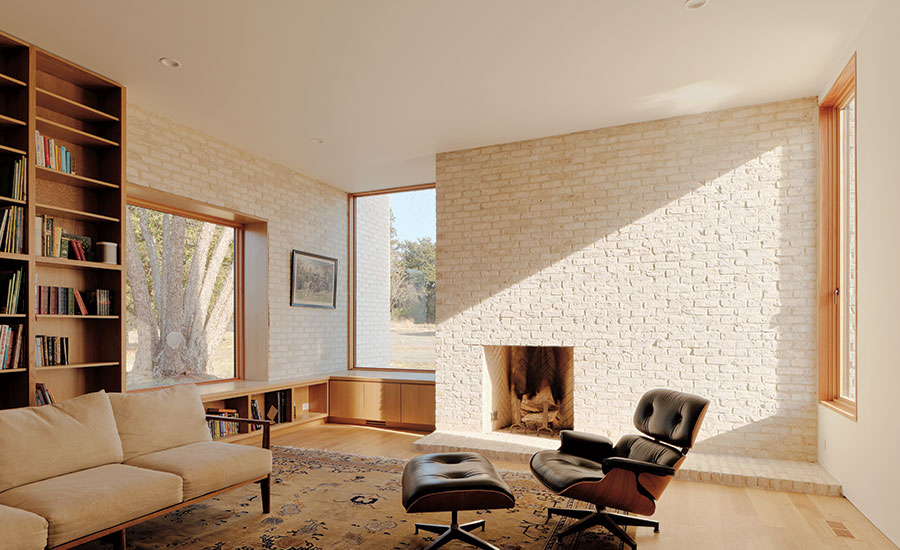 The same white brick that clads the exterior forms interior walls, as in the library. 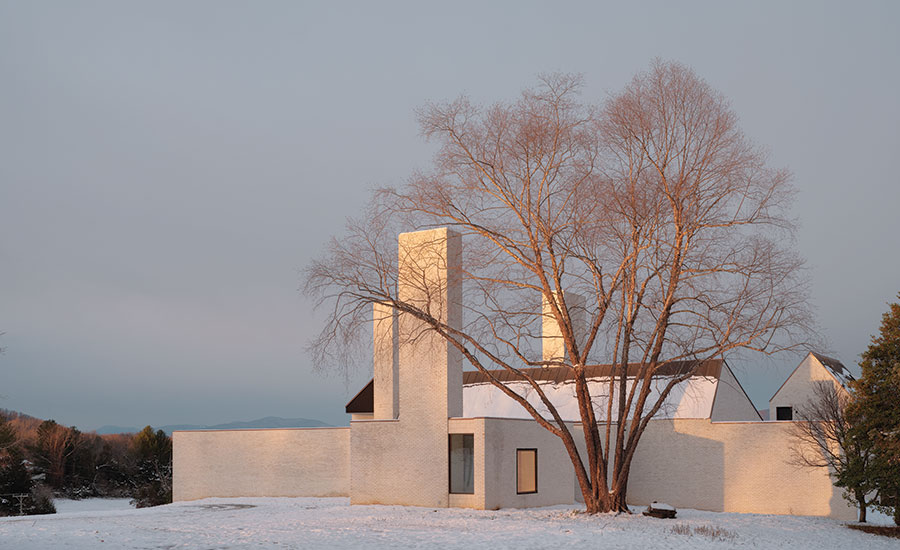 A view from the east reveals the low slung volume of the library.

Throughout the minimal interiors—the only exceptions are the children’s rooms, where walls and furniture are adorned with the colorful doodles of the occupants, encouraged by their artist mother—white-painted walls mingle with brick walls and slate or wood floors. Brick, metal, stone, wood. Says Ryan, “We used everything Jefferson used.” Jefferson’s own late 18th-century home nearby, Monticello, had a metal-domed roof, radical at the time and difficult to build.

Ryan’s house is not radical. Rooted in its place, this impressive structure atop a gently sloping ridge stands out among its distant neighbors in the hills of horse country—its traditional materials, historic references, and familiar forms reconfigured and refreshed in a 21st-century interpretation that, like those earlier precedents, not only stands out, but should stand up to the test of time. 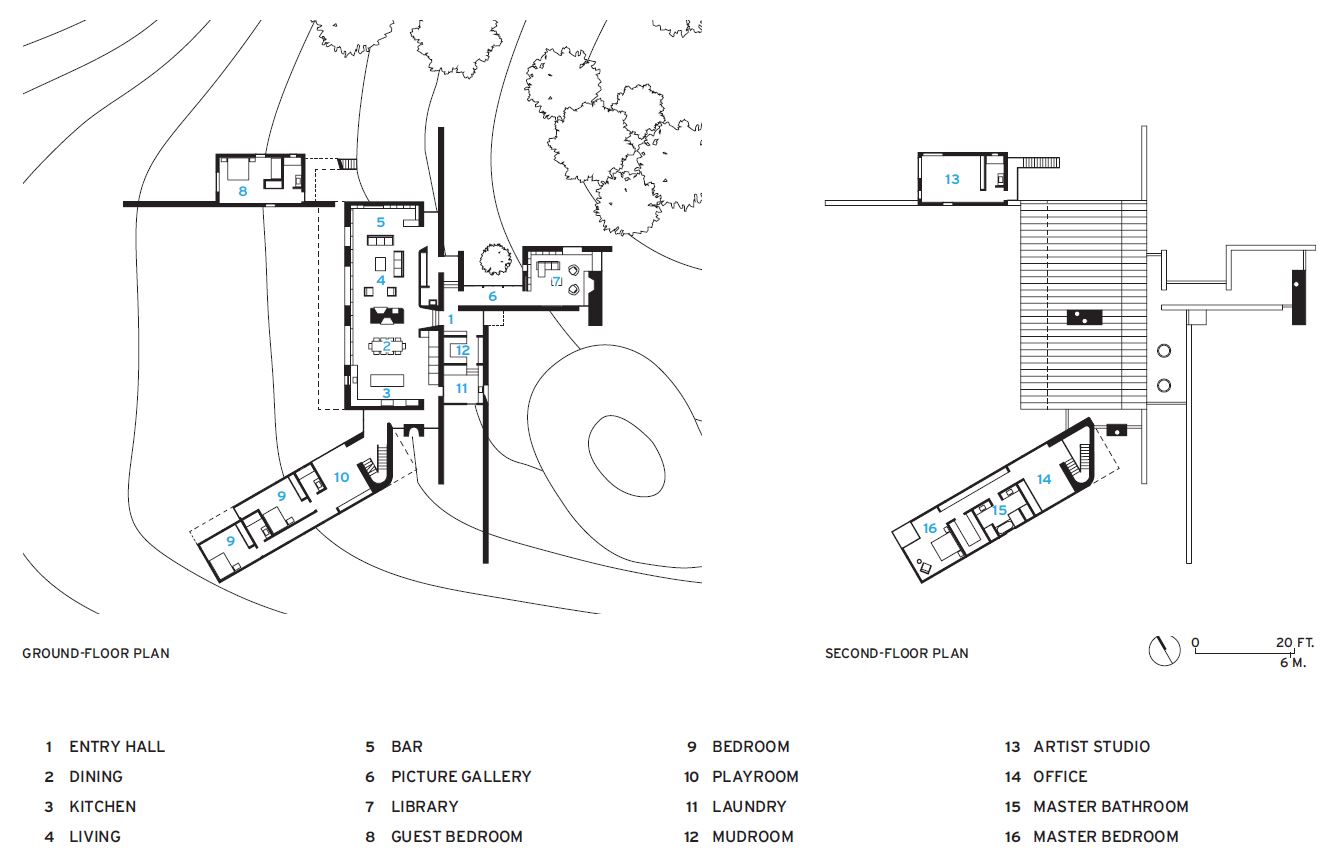