Over the past 30 years, San Francisco has made impressive progress cleaning up its built environment. Since 1990, carbon emissions from the operation of buildings have dropped 51 percent. And between 2013 and 2018—despite tremendous economic growth—energy use in commercial structures was reduced 11 percent. But with buildings still responsible for 2.2 million tons of greenhouse-gas emissions annually (about 44 percent of the citywide total), there is more work to do. To completely decarbonize buildings in San Francisco by midcentury, “we need to redouble our efforts,” says Barry Hooper, senior green-building coordinator with the city’s Department of the Environment. “The next 10 years will be critical.”

A primary focus for San Francisco has been on greening the electrical grid while advancing all-electric buildings and moving away from the use of natural gas. Last September, the Board of Supervisors approved legislation requiring that buildings larger than 50,000 square feet depend only on renewable energy by 2030. Then, in January of this year, they adopted two ordinances. One bans gas con­nections in new or significantly renovated municipal facilities. A second sets a higher performance bar—above the already stringent energy code—for all buildings that opt to include gas infrastructure.

Such all-electric measures have been sweeping California. Berkeley was first, with its city council voting last July to prohibit gas hookups in new small and midsize residential buildings. Since then, 29 other jurisdictions throughout the state have adopted regulations that discourage gas or outright ban it. These policies will have a significant impact, since much of California’s grid is already carbon-free. In San Francisco, almost 70 percent of its electricity comes from renewable sources, while an astounding 81 percent of building-related emissions are attributed to natural gas.

All-electric advocates tout a number of benefits beyond reductions in climate-warming emissions: better indoor air quality as a result of eliminating combustion and avoiding the risks associated with flammable gas in a seismic region. In addition, repairing natural gas infrastructure damaged during a major quake could take many months, compared with a week for restoring electrical service.

For multifamily buildings in particular, electrification makes good sense, says Katie Ackerly, sustainability lead at David Baker Architects. Among its all-electric projects are two buildings in Hunters View, with 120 ­affordable units, slated to break ground in January 2021. Ackerly explains that domestic hot water is the largest single energy consumer in housing, and heat pump technology for this use is not only well established, but often works at a higher efficiency. 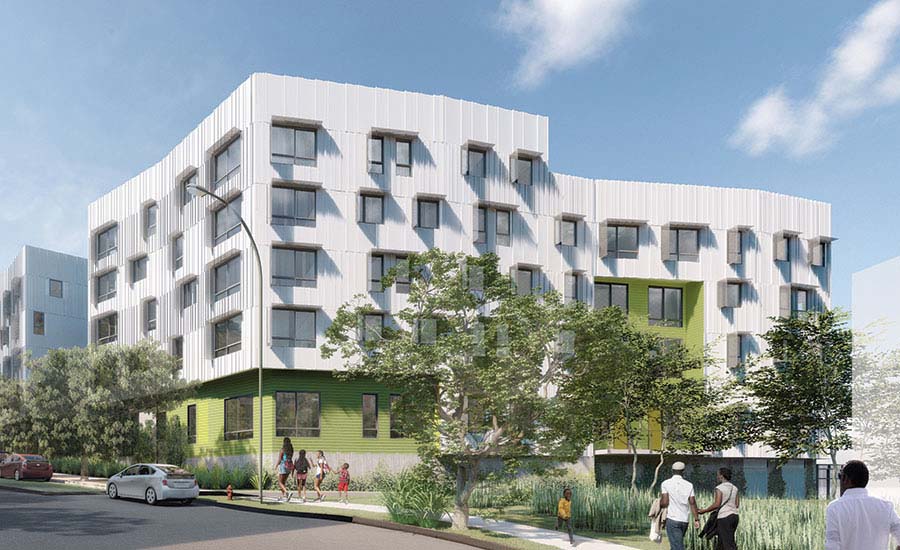 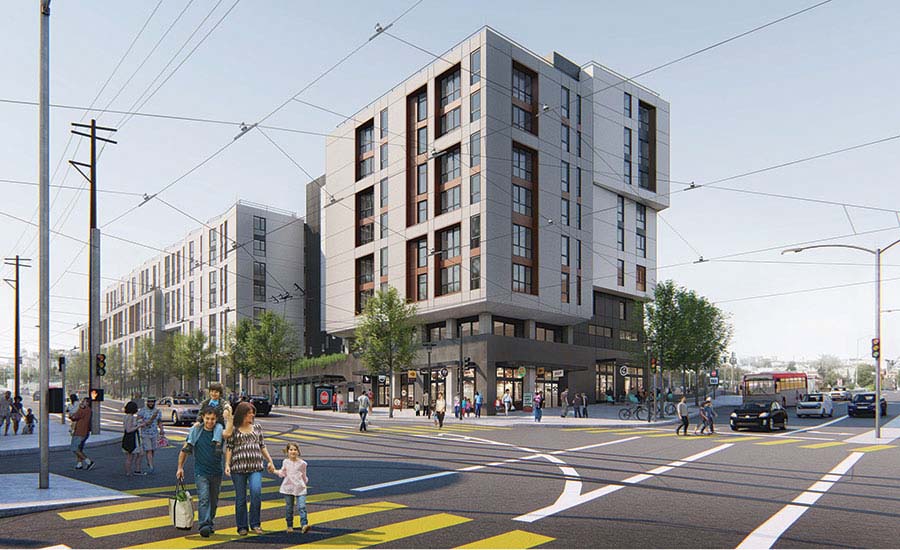 One market where the all-electric typology is taking hold in San Francisco (top) is in affordable housing. Two such projects slated to break ground early next year are a pair of buildings, with a total of 120 apartments, in Hunters View, designed by David Baker Architects (1) and the 131-unit Balboa Park Upper Yard, designed by Mithun (2). Images courtesy David Baker Architects (1) ; Mithun (2), click to enlarge.

Anne Torney, a partner at Mithun, says a sticking point for the all-electric concept is in market-rate housing, where developers consider high-end gas ranges a selling point. “Affordable-housing nonprofits think about community benefits and public policy goals more broadly, and they don’t need to worry about marketability,” she says. Her firm has several affordable all-electric multifamily projects under way, including the 131-unit Balboa Park Upper Yard, expected to break ground early next year.

Moving all-electric new construction forward is the easy part, says Hooper. “The tougher question is, ‘What do we do with our existing buildings?’ ” How best to wean all of the city’s building stock off gas will be addressed in a zero emissions “road map” to be released in November. It has been informed by a task force that includes design professionals, developers, utilities, and community members. Hooper acknowledges that implementing these policy recommendations will require time and investment from both the public and private sectors. But, he warns, “the cost of inaction will be greater.”

Embodied Carbon and the Envelope