The name, Quirk, is misleading. There’s nothing peculiar or eccentric about this new hotel in Charlottesville, Virginia. Rather, it is a highly anticipated high-end addition to the city’s limited hospitality options, and that’s instantly apparent upon entering its towering new white-brick structure along West Main Street.

Set back slightly from the historic houses immediately adjacent to it, the long lobby and reception area—“a living room for the city,” according to Danny MacNelly, partner at ARCHITECTUREFIRM, the hotel’s designer—serves as a bright and cheery procession leading to the other public spaces: a restaurant and ballrooms to the left and, straight ahead, a bar, lounge, and gift shop. The building extends through the entire block, which descends to the north, where a lower-level art gallery, accessed by stairs coming down from the shop, opens onto Commerce Street on the opposite side. 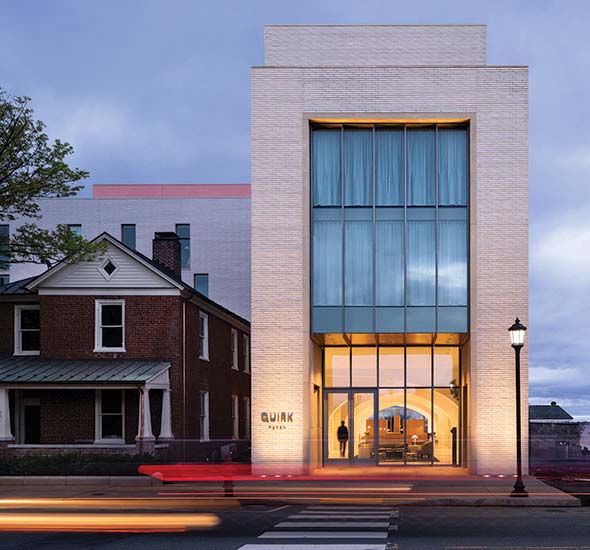 The art gallery was not an afterthought. Indeed, art was the driving force behind this hotel, and its precursor, the first Quirk Hotel, in downtown Richmond, about an hour away, which opened in 2015. Katie Ukrop, who owns the small chain with her husband and a group of investors, is director of Richmond’s Quirk Gallery, namesake of the boutique lodging. Says Ukrop, “This new space really allows the art to sing.”

MacNelly had worked with the Ukrops on the first Quirk while at his previous firm, renovating a 1916 Renaissance-style former department store. “It was less challenging to build from the ground up,” says Katie of the Charlottesville branch. “We were able to create the spaces that we needed without being limited by the confines of a historic building.”

A signature element of the new building, however, was inspired by its sister hotel’s historic structure. A series of striking split arches caps the 15-foot-high tubelike volume that stretches from the entrance to the rear facade, “a distillation,” says MacNelly, of the groin-vaulted ceiling of the 1916 Richmond building. “It was a way, architecturally, of keeping the brand identity with the move.” 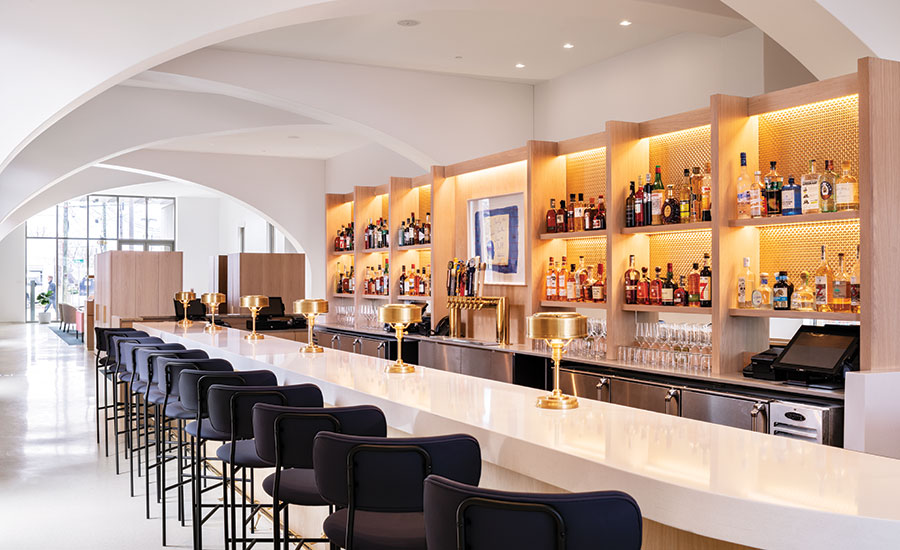 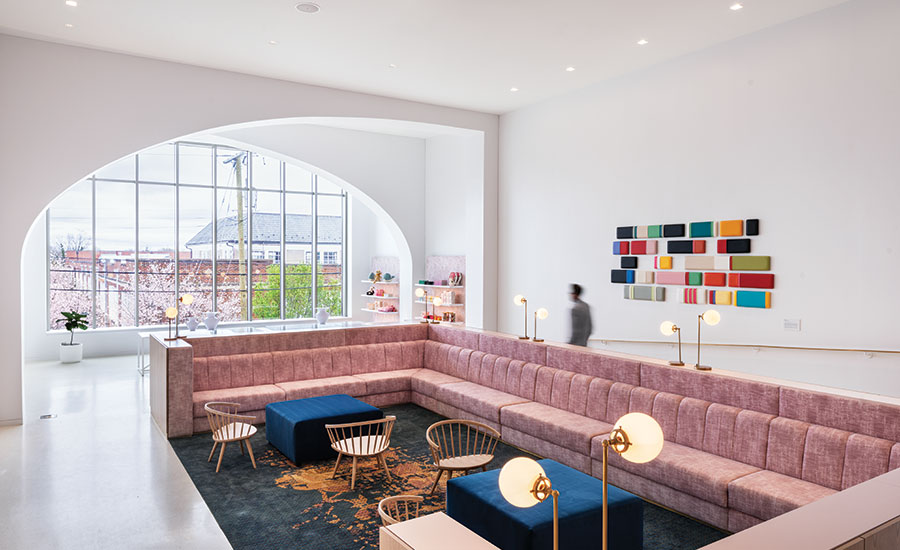 Arches dominate the public spaces, from the bar (1) to the gift shop just past the lounge (2) to the elevator lobby (3). Photos © James Ewing

The arches also serve as wayfinding—as you proceed down the arcade, gaps between the curving forms mark hallways that lead to other areas—the restaurant and restrooms, for instance. While some arches conceal structural columns or plumbing, many are simply framed-out drywall, all skimmed in plaster.

And, while this time around the architects had more freedom designing a new building rather than restoring an old one, there was the matter of the two 19th-century houses just next door—one, from 1824, known as Paxton Place, is listed on the National Register of Historic Places. Those had to be maintained while becoming part of the hotel.

Though Charlottesville is known as a college town—the University of Virginia’s Jeffersonian campus is within walking distance—it is also a popular destination for weddings, and the hotel plans to take advantage of that fact with a variety of amenities including two large ballrooms and overflow event space outdoors. The 1824 structure contained a beauty salon, which made sense to keep as a service for visiting wedding parties. The other small house was converted into a two-story café and whiskey lounge. 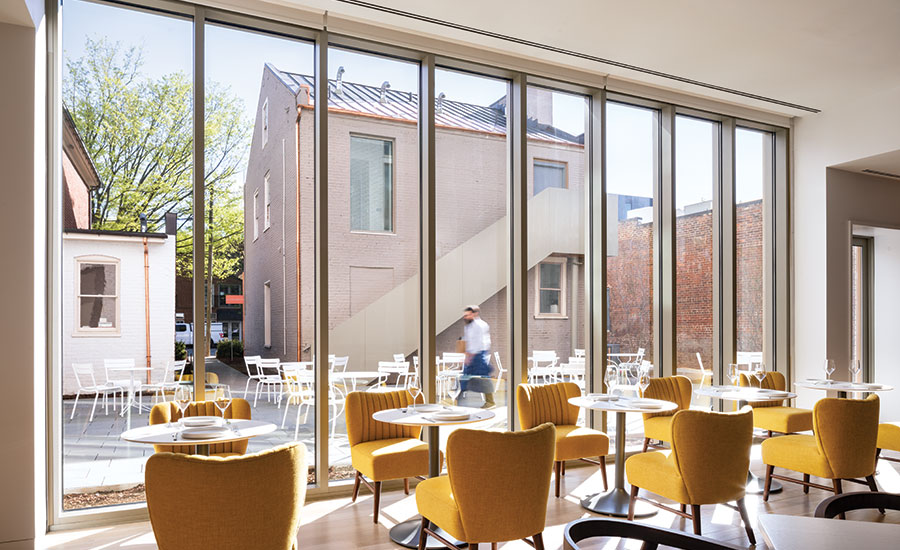 The restaurant has expansive views to the courtyard, set between the new building and existing houses. Photo © James Ewing

Within the new building, public spaces are elegantly furnished. Pink is the color of choice, another carryover of the Richmond outpost. Bathroom walls, much of the seating, and a good deal of the art on display for the opening exhibition have a rosy hue. The restaurant, where colors skew to a blue and gold palette, offers fine dining inside, and café seating in the adjacent courtyard, visible from the dining room through floor-to-ceiling glazing. That outdoor space between the historic houses and the rear of the hotel can be accessed from the sidewalk. “We wanted to make the restaurant feel like part of the city,” says project manager Mitch Crowder. 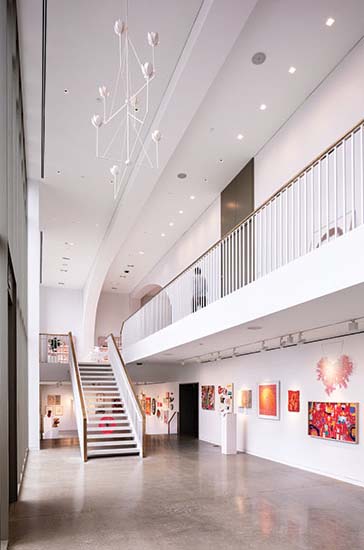 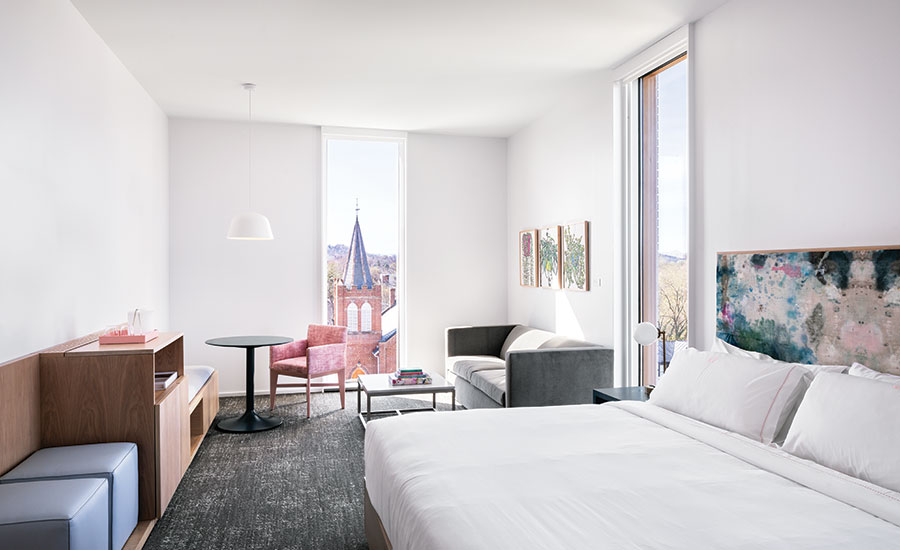 Like the gallery (4), the hotel’s rooms are punctuated by colorful works of art, which include the headboards (5). Photos © James Ewing

The interiors are meant to be a neutral backdrop for art. Guest rooms are simple, with the exception of one distinct feature: custom headboards are reproductions printed on canvas of Richmond artist Kiki Slaughter’s drip paintings.

The rooftop bar, a wildly popular feature of the Richmond hotel, was not yet completed during a recent visit in Charlottesville—just days after the new hotel’s opening celebration in early March, and days before it would be forced to close, like most other nonessential businesses across the country, due to the coronavirus. Despite an inauspicious beginning, the Quirk Hotel Charlottesville is poised to be a hot spot, just like its predecessor. 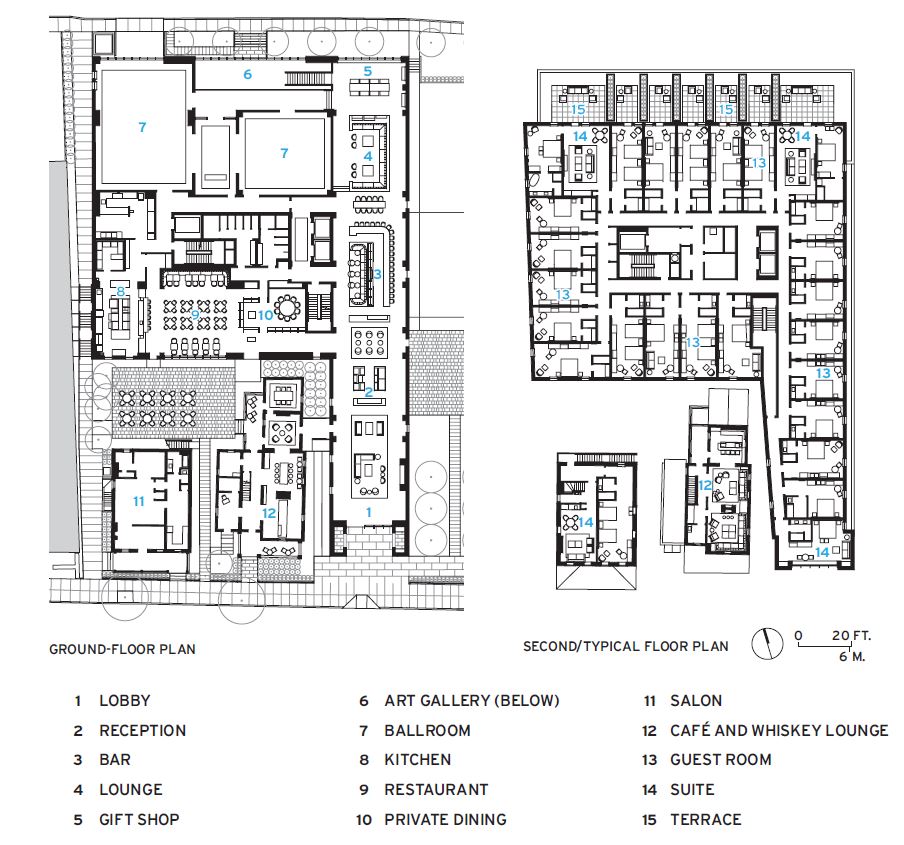