In addition to COVID-19’s wrenching human toll and economic devastation are disheartening cultural casualties; one is a Viennese production of Fidelio, Ludwig van Beethoven’s sole opera (first staged in 1805 but revised in 1806), marked by a new, impressively sculptural stage set designed by the Berlin-based architectural firm Barkow Leibinger. The architectonic assembly is based on a double helix that generates a spiraling construction of timber stairs. As with Beethoven’s original two versions, the current production was slated to occupy the ornate interior of the Empire-style Theater an der Wien, built in 1801.

The 2020 staging, directed by the actor Christoph Waltz and performed by a primarily European cast, would have been a fitting way to celebrate the 250th anniversary of the composer’s birth. Although the theater was shut down before the opera’s opening night on March 16 because of the pandemic, the Austrian government allowed a performance to be captured on film for television. 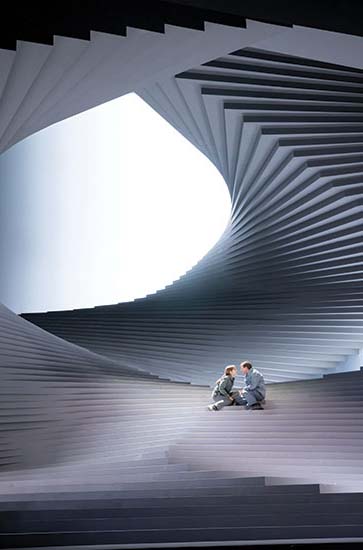 Frank Barkow, a founding partner of Barkow Leibinger, got involved in the design through his friendship with the Viennese-born Waltz, who has previously directed two well-received operas, Der Rosenkavalier in 2013 and Falstaff in 2017. Having an architect engaged in set design, as for this Fidelio, is somewhat unusual. While designers often successfully explore the dynamic interplay of two and three dimensions in set design—such as Carl Fillion’s scheme for Wagner’s Ring Cycle (PDF – page 35), directed by Robert Lepage at New York’s Metropolitan Opera—the architectural contribution here appears, in photographs and video, to be purer, simpler, and stronger, and less gimmicky. Here Barkow’s spatially curvilinear topography for Fidelio forcefully fills the 53-by-53-foot depth and width of the stage and its 36-foot height, framed by the ornate, curved arch of the proscenium. 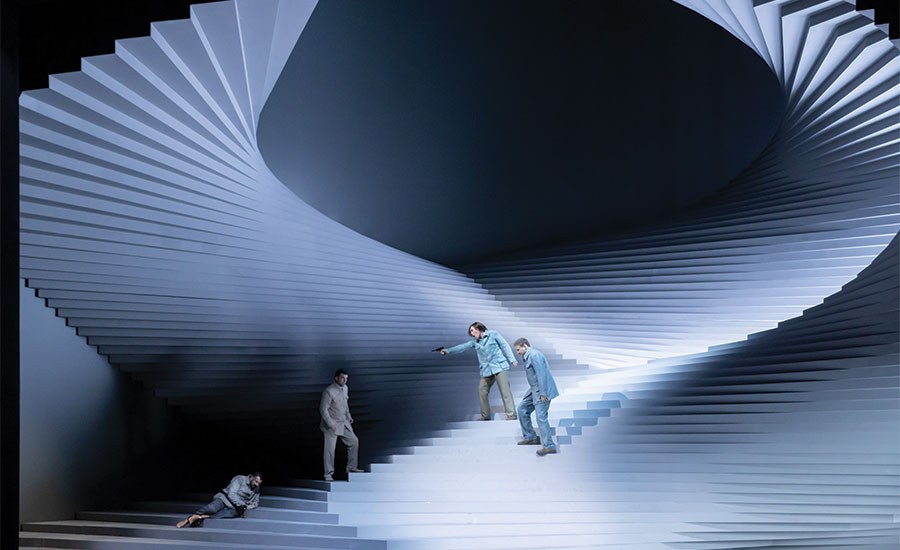 The curvilinear wood set emanates from a double helix, which swoops around dramatically as it fills the stage. Photo &copy Iwan Baan

The story takes place in a Spanish prison, where Leonora, disguised as a male guard called Fidelio, tries to save her husband, Florestan, a political prisoner, from sure death. (Spoiler alert: this “rescue opera” has a happy ending.) Both Waltz and Barkow envisioned a monumental set, such as a grand stair, that would vertically lift up, through the backstage area. Piranesi’s mid-18th-century drawings of Carceri d’Invenzione (imaginary prisons), threaded with stairs, partly inspired Barkow, “only we wanted this to be more abstract,” he says.

The architect’s concept started with a helicoidal surface that spirals into a double helix with an oculus at its top. The design’s sinuous timber construction, supported on a steel-tube scaffolding, provides ridges and steps where singers can enter from multiple points and move in diagonal trajectories, ascending to the light above or descending to the nether reaches of the dungeon below. 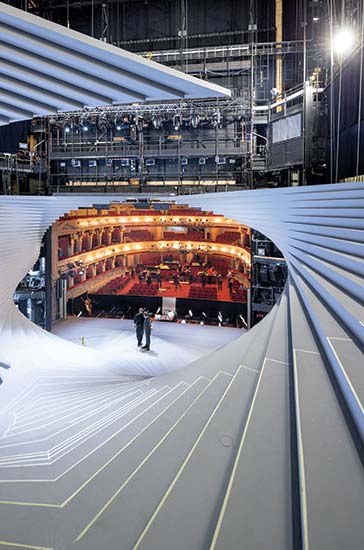 The singers walk up, down, and sideways on the timber construction as they gaze down to the audience and orchestra. Photo &copy Iwan Baan

To dramatize this choreographic aspect, the architect had briefly thought of having the set revolve on a disc, but the cost would have been prohibitive. The opera’s performers, no doubt, were relieved, since the slopes appear vertiginous enough. As it is, Florestan—performed by a stuntman, in a segment just before the orchestra begins—is flung from the top of the set by two guards and hurtles down the cascade of steps toward the dungeon. As for the rest of the cast, Barkow says, “the singers didn’t stumble. They were like mountain goats.”

In executing the tiered construction, the architect created the drawings and digital models in Berlin. The set was put together in Poland, using CNC-cut timber segments, and then dismantled and sent off to a warehouse in Vienna, where it was reassembled for the rehearsals. Then the segments were taken apart again and carried through the narrow openings of the Vienna theater to be rebuilt on the stage “like a ship in a bottle,” says Barkow. 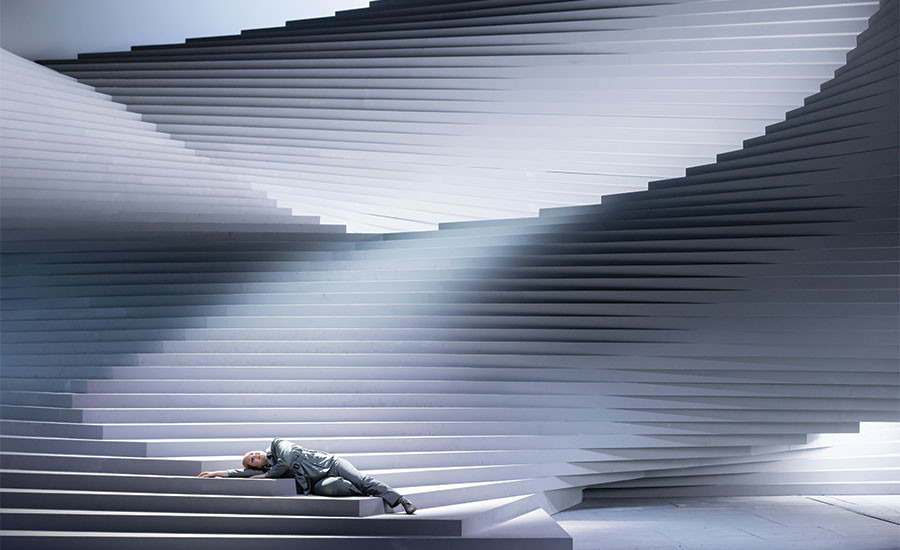 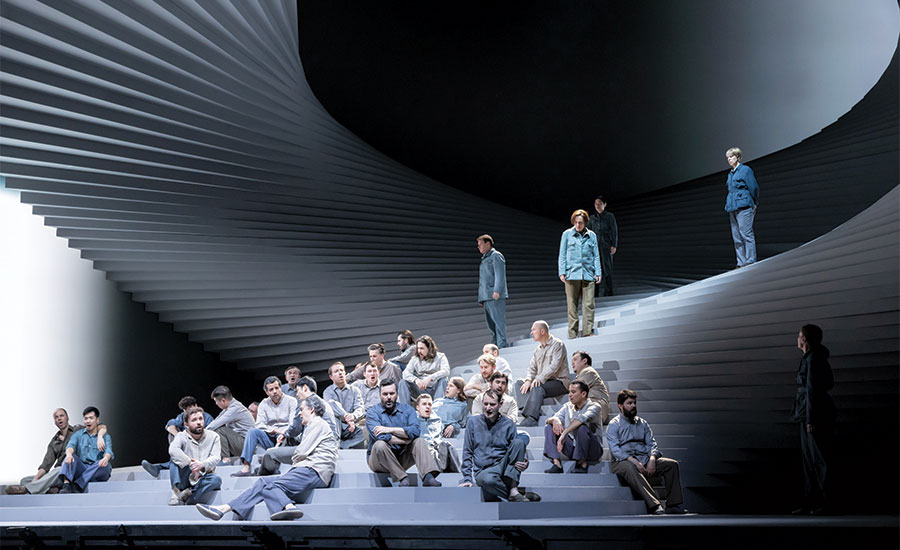 The lighting’s chiaroscuro effects enhance the drama of the gray-painted set, going from a bright light usually at the top to dark near the dungeon, with softly tinted illumination emphasizing the shifting moods. The lighting designer, Henry Braham, installed scrims of LED panels and screen diffusers to lend a sense of continuity and ethereality to the various mises-en-scene.

With regard to the acoustics, Barkow notes that the hard surfaces and swooping curves of the stepped forms helped project a balanced sound. The structure’s undulating contours were also good for sight lines, he says. Not only did the vantage points change remarkably, depending on where you were sitting in the theater, but the conductor (in this case Manfred Honeck, who led the Wiener Symphoniker) could easily see the singers from the orchestra.

The set has remained in place in the theater during the pandemic’s closing, at least until the end of June, so it can be there when and if the curtain rises again. But whether this production will have a live performance is to be determined. Meanwhile, the single staging of this riveting Fidelio can be seen on YouTube so that observers can put themselves almost anywhere the camera has ventured. 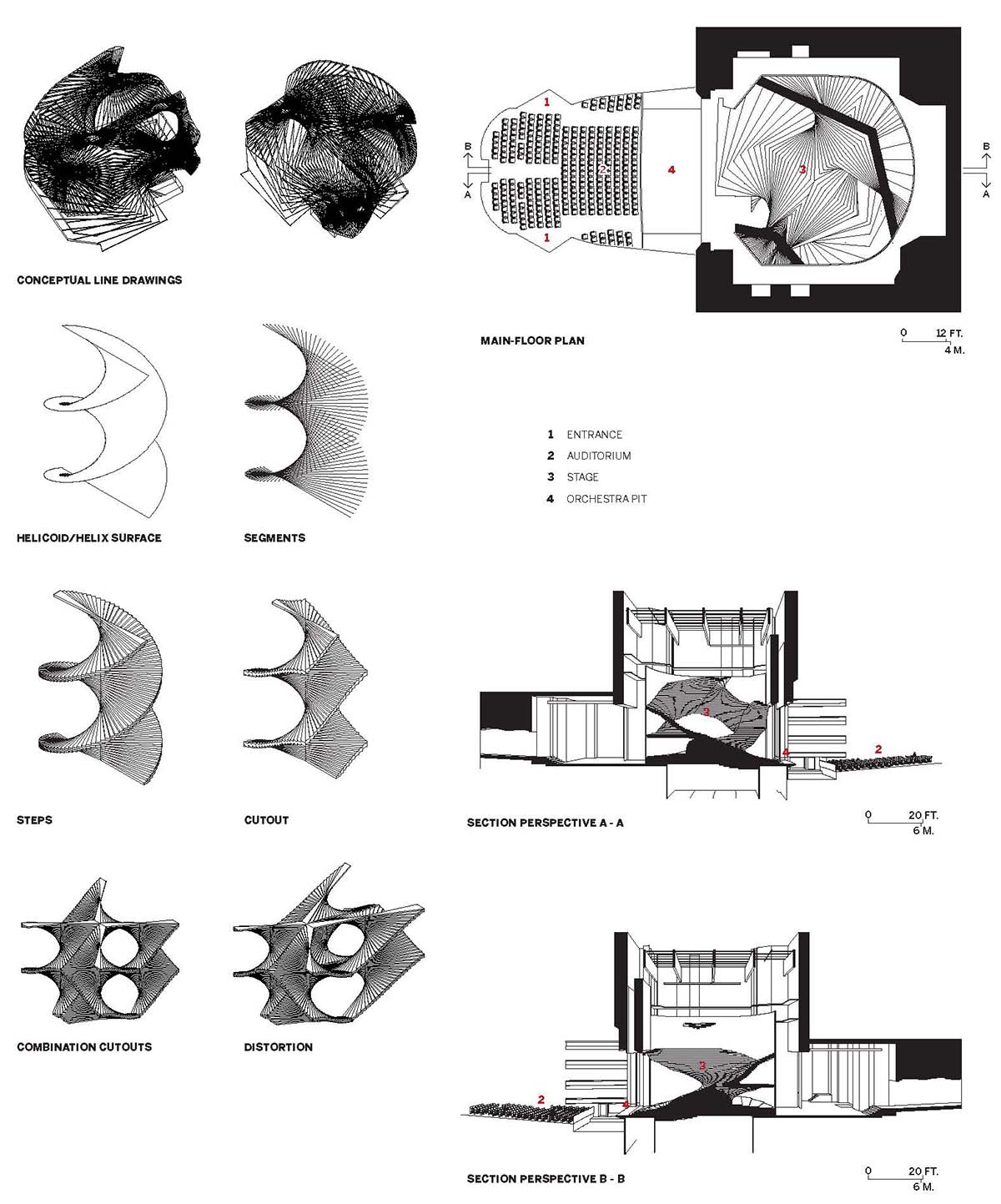