When Sergi Carulla and Oscar Blasco won the competition to redesign the historic town center of Ódena, an hour outside of Barcelona, in 2010, the world was a very different place. But their vision of the future is well suited to 2020, with an emphasis on public spaces that foster the social equality this new decade seeks.

Now, nearly a decade later, the duo’s Barcelona-based architecture and landscape-design firm, SCOB, has completed the new Placa Major for its clients, the town hall of Ódena and the government of Catalonia. The site, located on the hillside of a Medieval castle, comprises 1.3 acres of land that was previously a heavily trafficked six-way intersection in the center of the mountainous Catalan village. In their proposal, Blasco and his team changed the program from one that favors vehicles to a “pedestrian-priority space” adjacent to the existing structures—including the town hall, a church, and neighboring single-family homes—that he hopes can serve as a 21st-century gathering point for the community of 3,500 people. 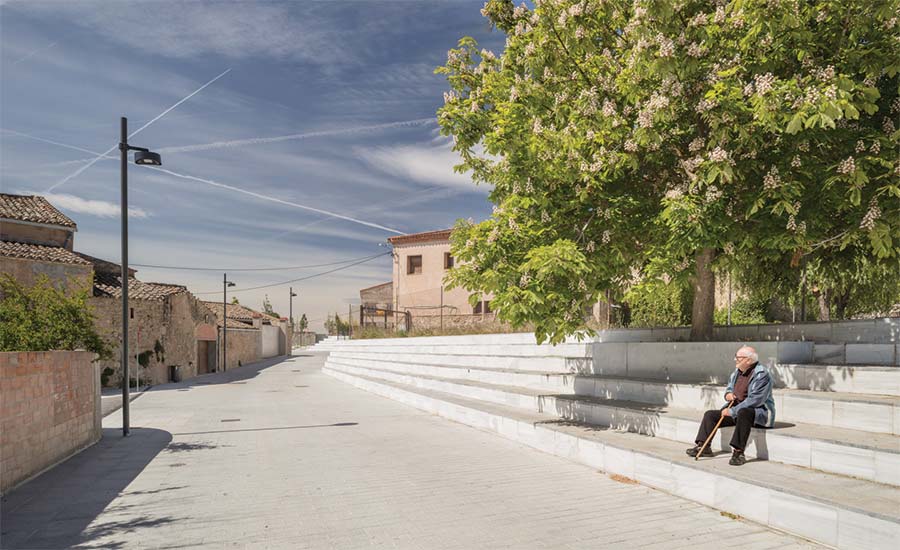 The redesign created more outdoor seating (above) and a pedestrian-friendly plaza for gatherings outside the town hall building and church (top). Photo © Adria Goula, click to enlarge.

“The plaza has a very complex topography, with steep slopes and level changes,” Blasco explains. “The challenge was to gain more horizontal space for residents’ use and to accommodate all of the events and fiestas that are regularly held in the municipality.” To transform the area, the firm razed the former maze of streets and driveways to create several flat expanses of granite paving, accessed by a series of beveled marble steps that provide seating. The stone was all sourced from nearby quarries.

The architect also mentions the regional vinyala (a local snail delicacy) and espelt (craft-beer) festivals, in addition to the traditional Spanish wine harvest, all regularly held in the town, as incentives to redesign the streets as one unified, open plaza, albeit with multiple levels. While a few of the streets have been closed to through traffic, a sloped ramp remains to connect the distinct neighborhoods on either side of town. Some existing trees in the intersection were preserved within the middle level of the plaza to provide shade during gatherings.

In addition to hosting the slew of local festivities, Blasco hopes the new plaza will bring “social inclusion, intergenerational change, contact with the outside world—which we have missed so much these days—and democratic freedom that does not avoid conflict, but guarantees rights and equality,” objectives he believes should be at the heart of all public spaces, including Ódena’s.