The fairy tales of Hans Christian Andersen are full of inanimate objects that come to life. “It often seems to me,” he wrote, “as if every hoarding, every little flower is saying, ‘Look at me, just for a moment, and then my story will go right through you.’ ” He might have enjoyed Copenhagen’s newest attraction, realized by architect Gottlieb Paludan and lighting designer Speirs Major, across the harbor from the Danish writer’s former home. At night, the giant BIO4 power plant becomes an enchanted forest, transformed by animated illuminations.

Light is an integral part of a facade design that wraps the biomass-fueled facility in a veil of eucalyptus trunks, celebrating wood as its source of green energy. (Though some scientists question the sustainability of this renewable technology, the wood chips burned at BIO4 are said to be from certified sources.) On three sides of the exterior, the debarked timbers are applied in a single layer, but on the 575-foot-long by 150-foot-high north facade, visible from the city center, they form a dense “forest,” 20 feet deep, suspended from a steel frame. A public staircase rises through dangling logs to a rooftop observation deck.

“As the canvas is made of layered wood, the lighting concept needed to work with that,” says Speirs Major partner Keith Bradshaw. “We wanted to evoke the late evening sun or the moon dappling through the edge of a wood—a simple idea, but the challenge was to achieve a convincing natural effect.” He likens the approach to theater lighting: the object is not realism but a scene with dramatic intensity and enough familiarity to be believable, or to suspend a viewer’s disbelief. 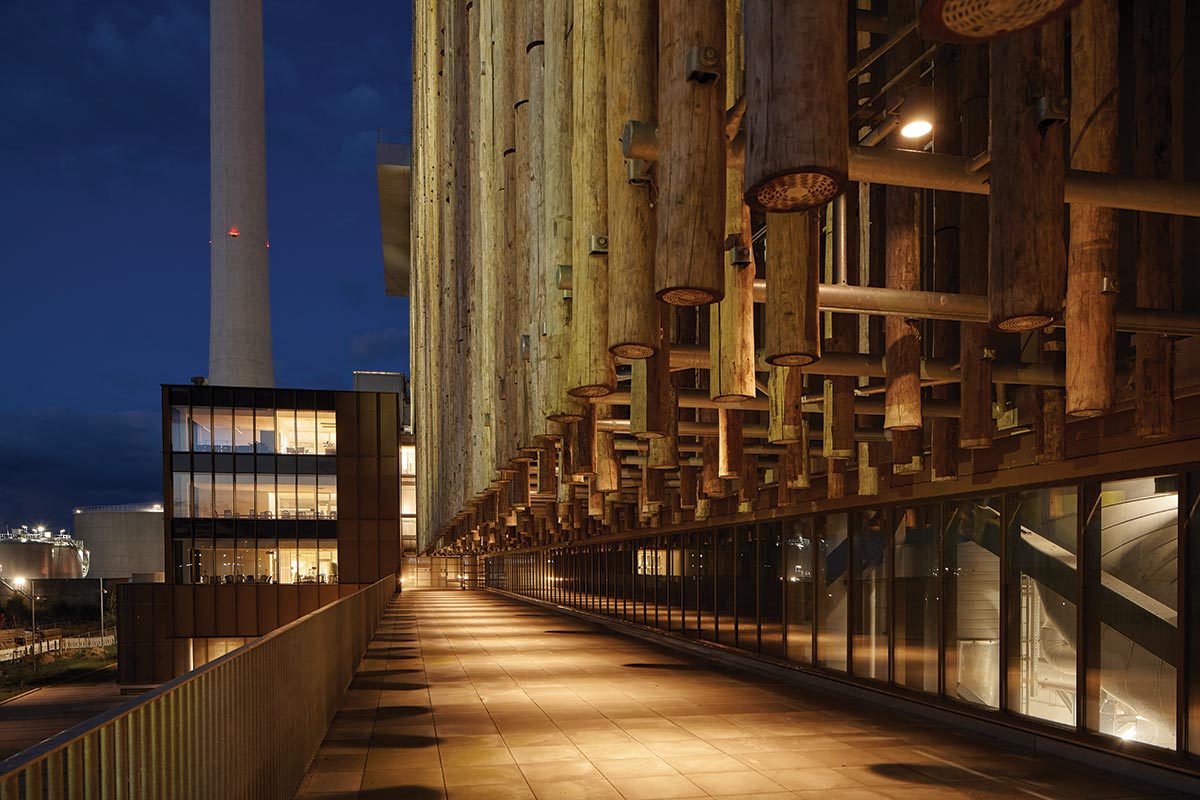 The forest of timbers is suspended by a steel frame. Photo © Allan Toft, courtesy of Speirs Major

Swirls and ripples of soft light appear suddenly and track across the timbers before dissolving, like fleeting patches of moonlight on the forest floor when wind blows through the canopy. Dark shadows resemble branches silhouetted by warm light, suggesting a sun that is somehow present in the night sky. Subtle variations in brightness, intensity, and pace produce an impression that is both organic and slightly mysterious.

To create a seamless image and the naturalistic impression of a single light source, Speirs Major opted to project light onto the facades, using 49 LED fixtures mounted on a row of steel ladders located 80 feet from the building. Each pushes light through breakup stencils in two rotating filters, and a soft-focus lens, that scatter the light to create the desired dappled or other realistic scenes. The overlapping patterns were synchronized in digital models and recreated on-site with laser guides to ensure minute precision.

It’s a sophisticated system, but much of the fixtures’ capability remains unemployed. Speirs Major was anxious to avoid both excessive energy use and light pollution. Against the dark coastal sky, a little goes a long way. “Contrast is the important thing,” says Bradshaw. “To seem bright, something just needs to be brighter than what’s nearby.”

Restraint was also necessary to preserve plausibility and a coolly sophisticated character. “It’s a subtle artwork, not a cartoon,” says Bradshaw. The color palette is limited to warm white light with a gentle golden tint that makes brown shadows, bringing out the honey tones of the timber. Establishing the ideal pace of change was also tricky. Movement appears slower at a distance, but what looks right a mile away might feel like a nightclub to someone on the stairs. 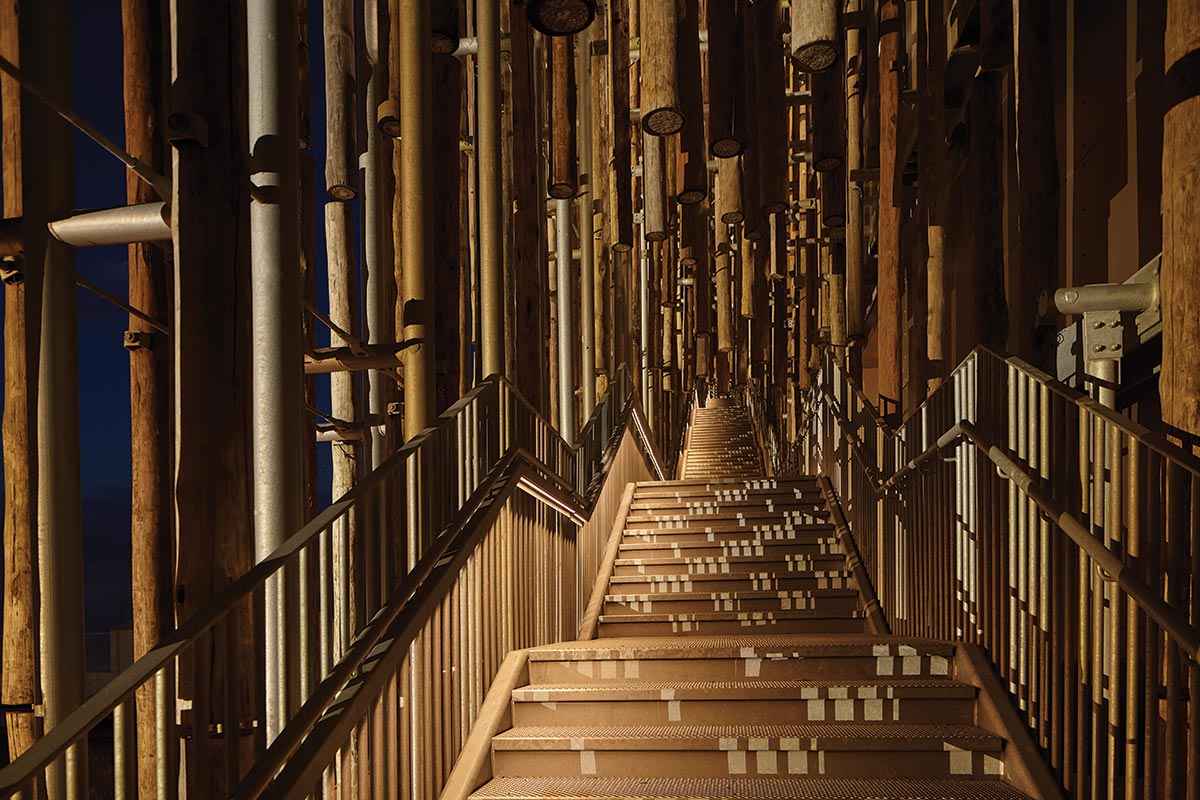 Projected light filters through the poles onto the stairs. Photo © Allan Toft, courtesy of Speirs Major

“Inside the structure, the emotional response is greatest,” says Bradshaw. Projected light is filtered through the thicket of poles to flicker around in the shadowy depths, splashing against gnarled trunks high overhead. Ascent through the immersive installation is guided by linear LEDs hidden in the handrail to ensure easy navigation. “Visitors should feel absorbed but not confused,” says Bradshaw. “This journey through the forest is a safe place from which to experience the magic happening all around.”

Read more about lighting projects from the March 2022 Issue