Fast-food restaurants are not a building type that this magazine publishes often. But supersize chain McDonald’s has been making occasional forays beyond formulaic familiarity and the double mansard vocabulary for some years now and, most recently, has created a stir with an outlet designed by Chicago-based Ross Barney Architects and located in—of all places—Disney World. The 8,000-square-foot building—a boxy volume defined by its expanses of wood louvers and glass jalousie windows, as well as its butterfly roof and large canopy—aims to be the world’s first net zero fast-food establishment—a sure sign that sustainable design for the masses has been served. 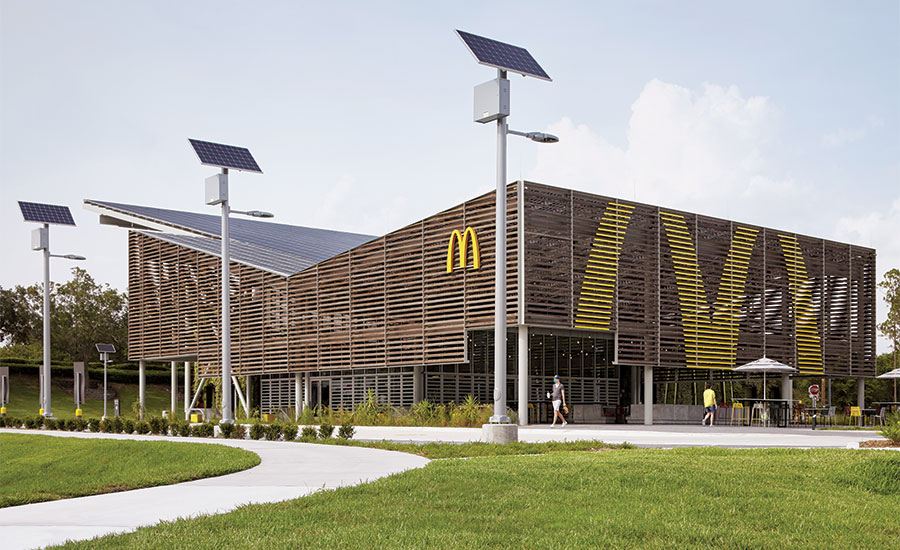 The architects wanted the building’s sustainable approach to be clearly visible, and employed off-the-grid exterior lighting (1) and a living wall at the entry plaza (2). Photos © Joyce Studios, click to enlarge. 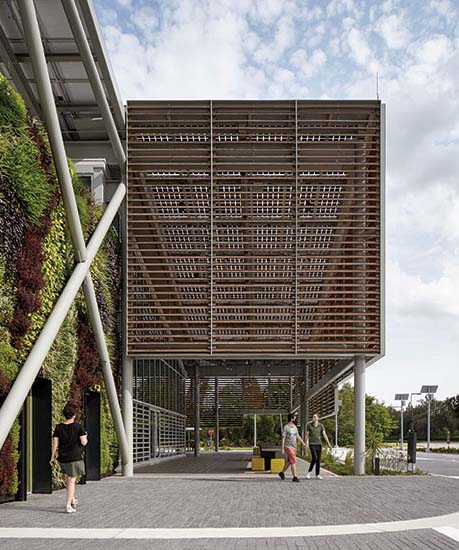 That this building has landed at the theme park—on an unusually large, prime site—is not as ironic as it might seem. Robert Venturi probably would have agreed, given the current appetite for green design. “Disney World is nearer to what people really want than anything architects have ever given them,” he told Paul Goldberger for a New York Times article in 1972. “It’s a symbolic American utopia.” Perhaps the architect had an inkling that, more than 25 years later, in 1998, his firm, Venturi, Scott Brown, would design the first McDonald’s flagship here, with its stately golden arches and enormous Happy Meal bursting forth from a Mondrianesque facade. Ten years later, the architects revisited it, bringing a more staid, clean-lined aesthetic to the structure.

Last year, as part of their lease-extension discussions, the chain decided to renew and update with a fresh scheme. In light of its Scale for Good sustainability program (which guides everything from packaging to meat sourcing and reducing emissions), the company—famous for such naughty indulgences as Big Macs and the drive-thru—knew that environmental stewardship had to be the focus. “We are trying to project an image of McDonald’s as a progressive, modern brand,” says Max Carmona, senior director of global design and development. McDonald’s turned to Ross Barney, which in 2018 had designed a groundbreaking steel-and-cross-laminated-timber global flagship in Chicago. “In Orlando, we didn’t beat around the bush,” says design principal Carol Ross Barney. “We wanted to see how far we could reduce energy requirements and decided that this had to be a net zero store—we wanted to present a billboard to America, to communicate the corporate values of this company. And then I said, ‘What did I get myself into?!’ ”

Apparently, McDonald’s makes its buildings the way it makes its food—fast: the timeline from design through construction was a year and a half. “It was like architectural calisthenics,” says Ross Barney. To save time and money, the team repurposed the existing building’s basic footprint, some foundations and kitchen enclosure, and utility connections.

Quick-serve restaurants tend to be energy hogs, so, to generate at least as much energy on-site from renewable sources as the building uses, the project team had to cut consumption significantly. As designed, the building is projected to consume 35 percent less than baseline, or 666,454 kWh/year. “More than anything else, that influenced the design,” says Ross Barney. The team accomplished this largely by optimizing kitchen equipment, which carries the biggest loads. For example, the restaurant is using more efficient compressors and seals for refrigeration, as well as standby mode sensors for high-energy-use equipment. 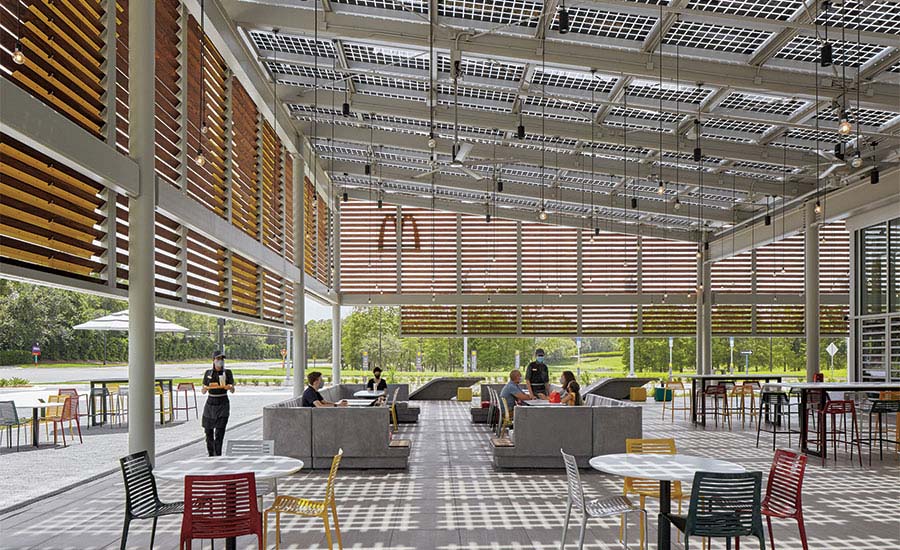 The next biggest savings will come from cooling, which accounts for about 10 percent of the total load. Given the climate, the team determined that, with the right conditions, the restaurant could operate without air conditioning 65 percent of the year. So the building envelope became the focus of their attention: it had to be robust but also transparent, connecting diners with the wetland surroundings. A handsome “breathing wall” provides shading and natural ventilation. Fixed wood louvers are lightly charred to limit maintenance, points out Ross Barney (Disney’s “Imagineers,” who review all aspects of design projects, deemed traditional shou sugi ban “too Darth Vader”). Extensive operable jalousie windows are automated through the building management system to close when air-conditioning is required. A 6,000-square-foot lanai-like porch, shaded by the wood slats—and with 4,800 square feet of transparent glass building-integrated photovoltaic panels (BIPVs) overhead—provides outdoor dining.

Exploring options for on-site power generation, the team had looked at geothermal and wind but selected solar, using, in addition to the BIPVs over the porch, 18,700 square feet of standard photovoltaic panels on the enormous canopy, all of which is projected to generate 704,791 kWh/year. Off-the-grid solar-powered parking lot lighting also lightens the load. 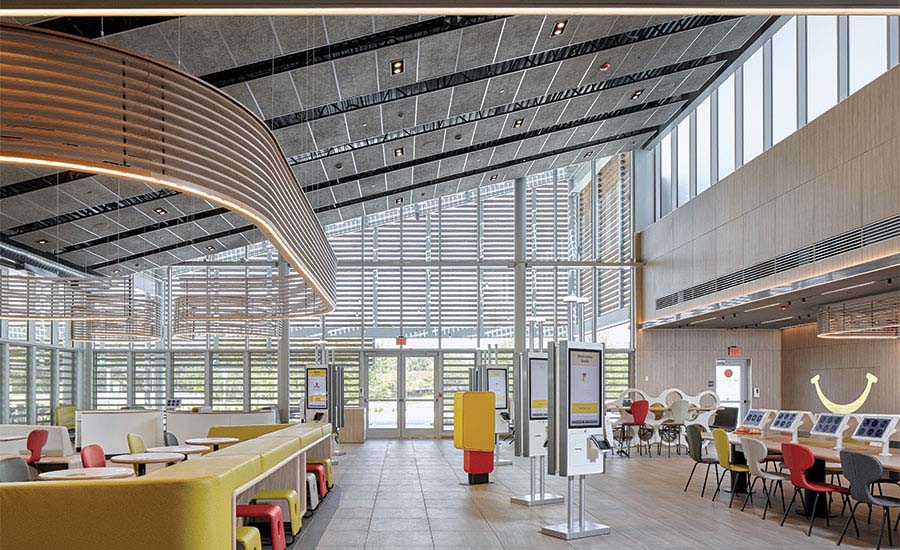 Inside are ordering kiosks and monitors that teach about renewable energy. Photo © Joyce Studios

Inside the restaurant (due to the pandemic, now only serving via drive-thru and delivery), the soaring daylit ordering and dining areas are dominated by the play of light and shadow thrown by the louvers and glass BIPVs. “We wanted it to be that simple and direct,” says Ross Barney. “We wanted people to understand the sustainable values that were premising the design.” For each outlet, McDonald’s selects from a standard set of interiors and, for this site, employed a design by consultancy Uxus dubbed “Spirit of Family.” A durable material palette, with laminate, solid surfacing, and ceramic tile, is what you would expect for fast food, but here it has a more refined air.

The steel-frame building nestles into the lush landscape, which has been planted with all-native species. To mitigate runoff, the team specified permeable paving for the entry plaza and outdoor dining area and a 1,800-square-foot living wall. Otherwise, stormwater from the 1.5-acre site drains to two adjacent ponds, and from there is handled by the resort’s sophisticated water-management system, designed to also keep mosquitos at bay—a plus for outdoor dining.

McDonald’s is targeting zero energy certification through the International Living Future Institute (ILFI). It is too early to say if it will achieve this goal, since it just opened this summer and ILFI requires a year of energy data. Into the future, McDonald’s hopes it will function as a laboratory of sorts, where the architects’ explorations can be put to the test and perhaps replicated or adapted in other buildings.

With design, points out Ross Barney, you are constantly asking for clients’ trust as you lead them into unfamiliar territory. “And that’s not always comfortable, especially if you’re in the role of safeguarding a brand or reputation,” she says. “McDonald’s was willing to go down the path with us, trying new materials and systems—and new ideas.” 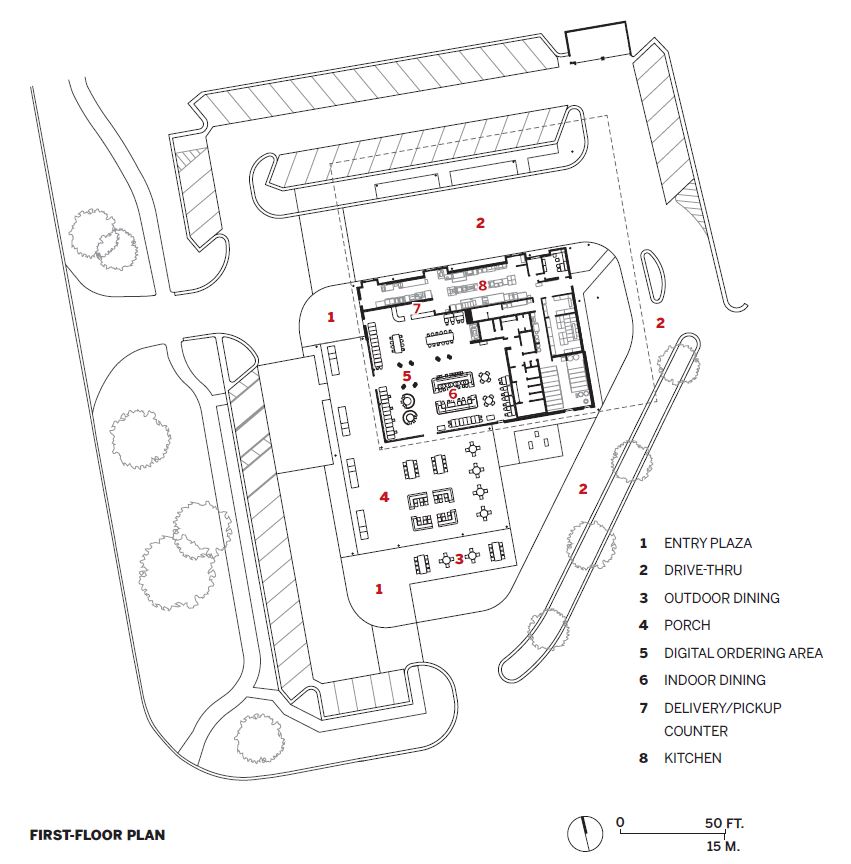