To offset a declining population and reinvigorate its town center, Gloggnitz, a small city 40 miles south of Vienna in the foothills of the Alps, decided to invest in a new school complex. The facility would replace the aging primary, middle, and special-needs schools. Most importantly, it would be a welcoming venue for activities and instruction for adults and children after school hours, strengthening a sense of community. The design therefore would require a new way of thinking about educational infrastructure: “Let’s get rid of the old image of a school and make something new out of this,” says Dietmar Feichtinger, founder of the eponymous architecture firm based in Montreuil, France, selected for the project in 2015 as the result of an invited competition. 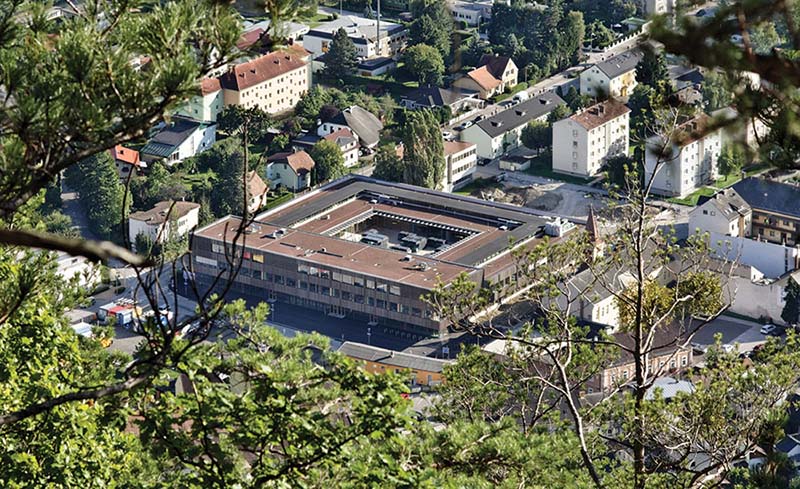 Gloggnitz’s new school, in the city’s downtown (above), is organized around a second-floor, central terrace (top). Skylights pop up from this outdoor space, illuminating gymnasia below. Photo © David Boreau, click to enlarge.

Although the periphery of the city would have offered more space for amenities like additional playing fields, Gloggnitz officials rejected the idea, opting instead for a central site where the existing primary and middle schools were located, necessitating their demolition. For this tight lot, Feichtinger designed a 93,000-square-foot, largely two-story building for 400 students. Roughly square in plan, the school rises to three stories on the northwest side, where it fronts an entrance forecourt. The ground floor, along with the level below, is primarily devoted to activities that students typically associate with fun—those spaces for movement and sport. Because the wider community would use these facilities too, the architect recessed the first level and surrounded it with glass on all sides. The upper floors, which house most of the classrooms and the administrative offices, appear to hover above the entry level, cantilevering 10 feet outward in all directions, providing shade and shelter. Ribbon windows emphasize the projecting volume’s horizontality, while vertical bands of ash-gray Austrian larch lend the prominent structure a delicate and inviting quality. The wood cladding, says Feichtinger “seems soft when you experience it, and people immediately feel comfortable with the building.” 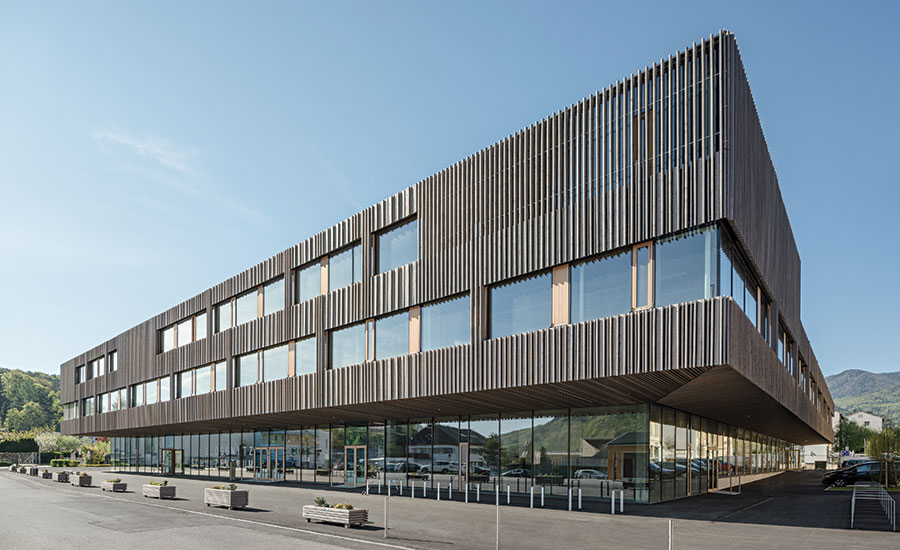 A transparent base (1) highlights ammenities shared with the community, such as the sports facilities (2). Photos © Hertha Hurnaus (1), David Boreau (2) 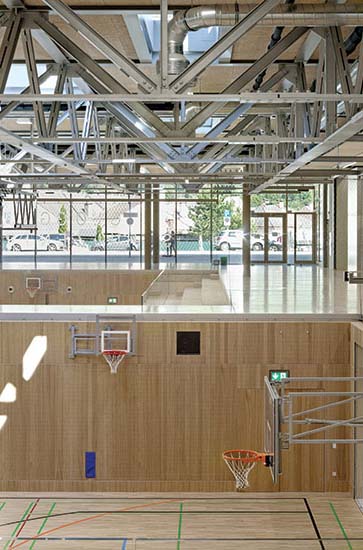 Upon entry, students and other users are greeted by a space that is open and expansive due to the dove-gray steel trusswork, spanning 98 feet, and 12 skylights that bathe the interior in daylight. Two sunken areas for a gymnasium, a gymnastics hall, and a climbing wall occupy the center of ground floor. Generous circulation allows users to walk around these areas and observe the activity below, protected by glass balustrades and rope-cable nets that extend from the floor to the trusses. Changing rooms are tucked into the basement, at the level of the gym floor. Special classrooms, workshops, laboratories, after-school programs, and a library enclose the sports areas at ground level on three sides. 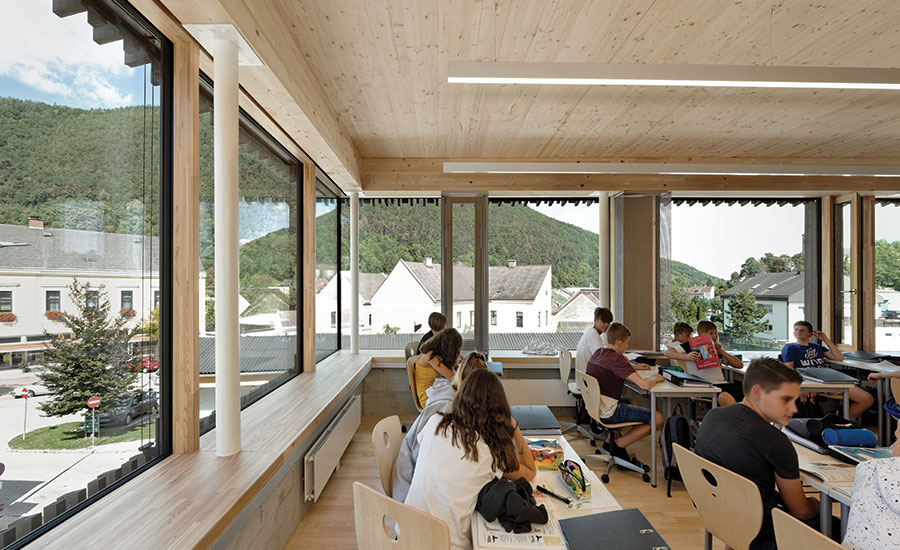 At the second level, classrooms line the periphery, with an inner skylit zone for circulation, collective instruction, and services, wrapping a central terrace. This outdoor space serves as an open-air classroom and a recreation area, and it also houses the skylights that illuminate the sports facilities, popping up from the terrace deck as glass-enclosed rectangular prisms. The smaller third floor, for the school’s administrative offices, has its own south-facing terrace.

In addition to the steel trusses, a variety of other load-bearing elements and materials are employed and are by and large left exposed. Among the places where reinforced concrete is used are the ground floor and the basement. It also forms the shear walls in the stairs located in each of the building’s four corners. At the upper levels, slender steel columns are combined with structural wall panels and ceiling slabs made of cross-laminated spruce. 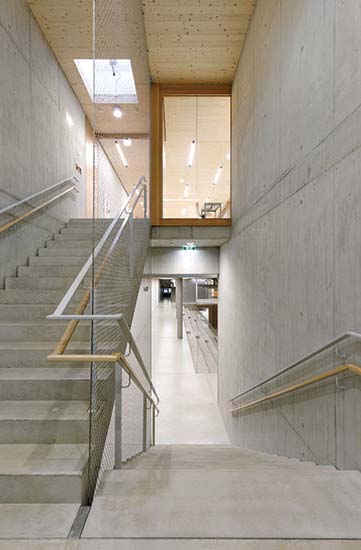 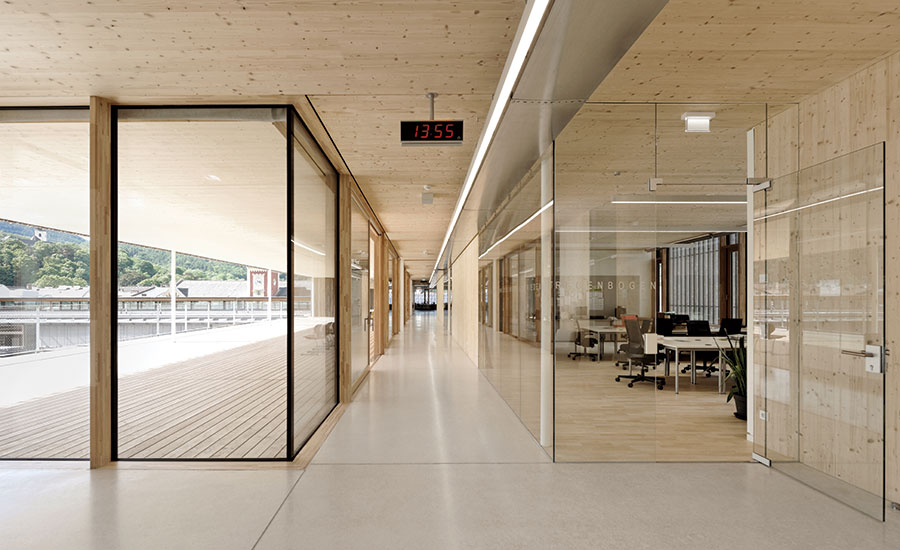 Structural elements, such as the reinforced-concrete shear walls in the corner stairwells (3), are largely left exposed. Cross-laminated timber is also used extensively, as in the roof slab over the top-floor administrative area (4). Photos © David Boreau

The school has been designed to make the most of the town’s pastoral surroundings, with classroom windows that frame views of the nearby foothills. Meanwhile, the ventilation strategy also takes advantage of the location and the climate: to supplement mechanical ventilation, each classroom has automatically controlled window panels, as well as manually operated ones. The former are opened by the building-management system, which constantly monitors carbon dioxide levels, to bring in the fresh alpine air.

Students and teachers were just getting settled in the Gloggnitz school complex in October 2019, when, soon thereafter, Covid-19 forced its first closure, in March 2020. Although they experienced only a few months of normal operations, the school, designed to have broad appeal, is demonstrating unanticipated benefits, according to primary school principal Herbert Pfeiffer. He observes that the ample circulation and openness encourage interaction and the development of social skills, like engaging with one another respectfully or not being excessively loud. And because the three separate schools now share resources, their staffs have had to learn how to communicate and coordinate their activities with one another as well. “The building,” says Pfeiffer, “is like a teacher.” 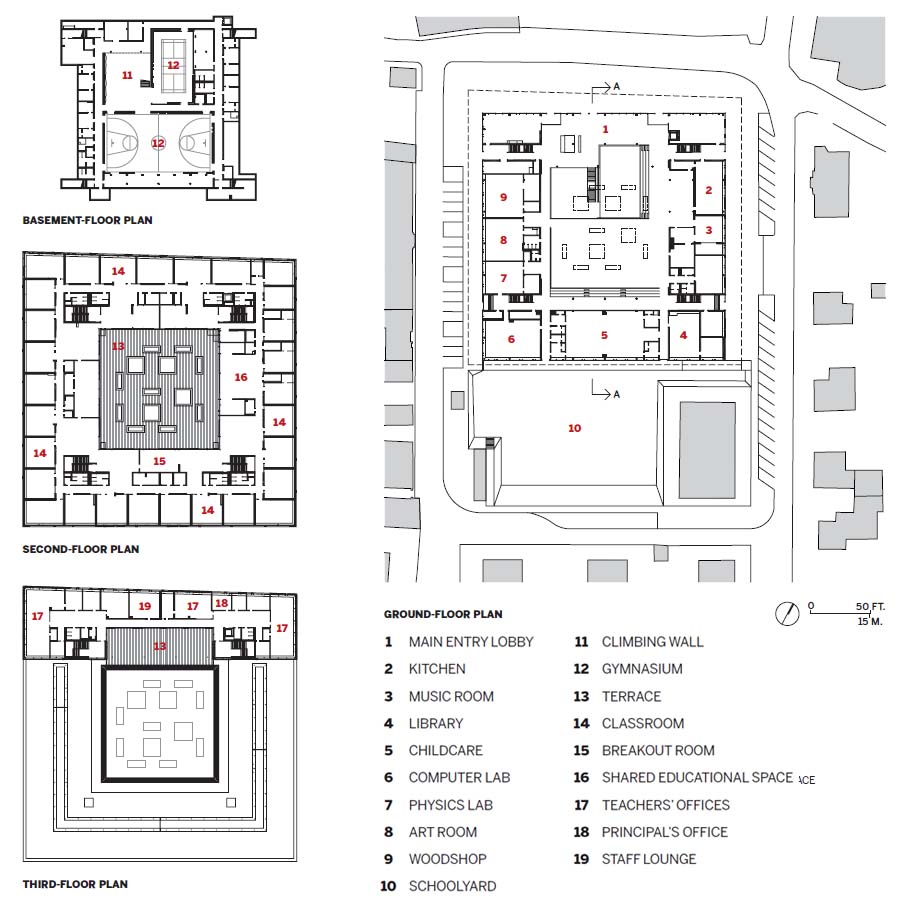